Among 15 pro-Israel Democrats are 10 incumbents, four open-seat candidates and one challenger 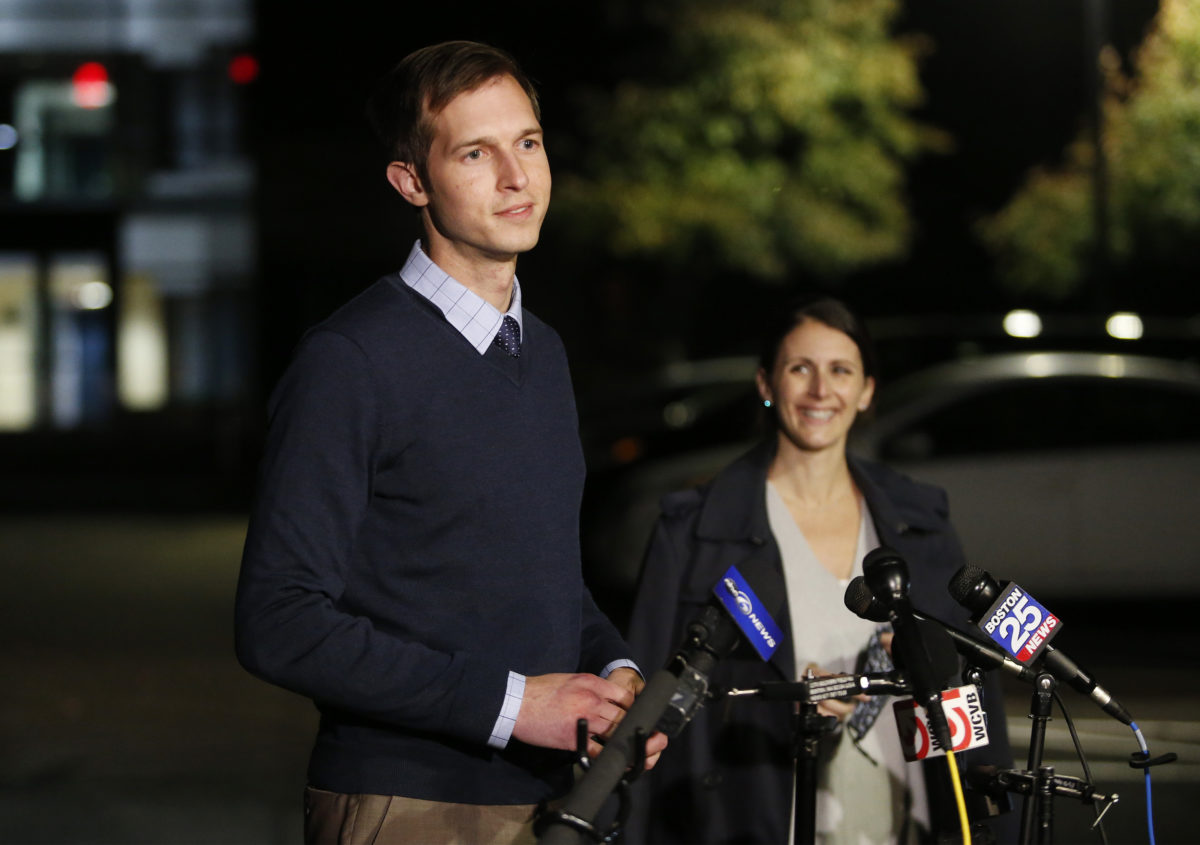 Jake Auchincloss (L) speaks to reporters after winning the 4th Congressional District seat as he stands beside his wife, Michelle, in Needham, Mass., on Election Night, Nov. 3, 2020.

DMFI PAC, the political arm of Democratic Majority for Israel, will announce on Monday that it is backing 15 House candidates in the upcoming primary elections as part of its first round of congressional endorsements.

The list, which DMFI shared exclusively with Jewish Insider, includes 10 incumbents, four open-seat primary candidates and one Democratic challenger — all of whom the advocacy group described as “committed to strengthening the U.S.-Israel relationship” in their shared support for continued U.S. military assistance to Israel as well as their rejection of the Boycott, Divestment and Sanctions movement targeting the Jewish State.

Just two of the incumbents, Reps. Jake Auchincloss (D-MA) and Ritchie Torres (D-NY), have yet to draw challengers in their primary races, despite rumors that Auchincloss in particular could face competition in the midterms. The freshman congressmen both notched endorsements from DMFI when they first ran for federal office in 2020.

The others are either facing Democratic challengers or defending their seats in contested member-on-member primary matchups resulting from the latest redistricting process, which is still ongoing in a number of states. In Michigan and Illinois, Reps. Haley Stevens (D-MI) and Sean Casten (D-IL) are, with support from DMFI, waging respective battles against progressive Reps. Andy Levin (D-MI) and Marie Newman (D-IL), who have frequently clashed with the pro-Israel establishment over their criticism of the Jewish state.

“We think all these people will be strong supporters of the U.S.-Israel relationship,” Mark Mellman, the president of DMFI PAC and a veteran Democratic pollster, said in an interview with JI on Friday. “We have serious doubts about whether their opponents will be.”

Last week, Turner, a prominent progressive who has vocally criticized Israeli policies as well as American funding for the Jewish state, announced she is seeking a rematch in the Cleveland-area district, which Mellman predicted could be “pretty competitive” even as he expressed confidence that Brown would ultimately prevail.

As with previous races where DMFI PAC has devoted resources since launching in 2019, the pro-Israel group is now endorsing candidates in a number of races where Israel is likely to emerge as a key source of tension amid mounting intraparty divisions over Middle East foreign policy that have come to the forefront on Capitol Hill and in Democratic primary matchups across the country.

In some races, for instance, DMFI is supporting candidates whose opponents are backed by Justice Democrats, the left-wing political group that has helped unseat a number of Democratic incumbents in recent years while attempting to push the party leftward on host of issues, including a foreign policy platform that includes conditioning U.S. military aid to Israel.

DMFI has sparred with Justice Democrats in several primaries where it has spent aggressively over the last few years, including, most recently, in Cleveland, but also in the Bronx and Massachusetts.

In backing Maloney, a longtime New York City congresswoman and pro-Israel stalwart, DMFI is setting itself up for another head-to-head clash with Justice Democrats, which endorsed one of her primary challengers, Rana Abdelhamid, last April.

The pro-Israel group is also supporting Steve Irwin, a Pittsburgh attorney competing in the Democratic primary to replace outgoing Rep. Mike Doyle (D-PA) in Pennsylvania’s 18th Congressional District. Justice Democrats, for its part, is backing Summer Lee, a state legislator and progressive activist affiliated with the Democratic Socialists of America, which formally endorsed the BDS movement in 2017.

The DSA has grown increasingly hostile toward Israel in recent years. In August of 2020, the group’s New York City chapter distributed a questionnaire asking that City Council candidates pledge not to visit Israel if elected, and last fall, its Madison, Wis., chapter called for the expulsion of an elected DSA member, Rep. Jamaal Bowman (D-NY), after he visited Israel on a congressional delegation hosted by the left-leaning Israel advocacy group J Street.

“There’s a context here that I think we ought to take cognizance of, which is to say that we have had some organized groups out there that have said they are attempting to execute, in their words, a hostile takeover of the Democratic Party,” Mellman emphasized. “A number of those groups have moved anti-Israelism from a peripheral part of their issue agenda to a central part of their issue agenda.”

“Their strategy is to go into deep-blue districts that the party doesn’t care about because it’s going to be a Democrat no matter who wins,” he added. “This is a real challenge that we’re facing.”

DMFI is hoping to fend off at least one high-profile DSA member, Amy Vilela, who is running to unseat Titus in Nevada’s 1st Congressional District, which includes portions of North Las Vegas. DMFI is also backing former Rep. Max Rose (D-NY) as he competes against another DSA member, Brittany Ramos DeBarros, in the Democratic primary for New York’s 11th Congressional District. Rose is seeking to reclaim the Staten Island seat after losing to freshman Rep. Nicole Malliotakis (R-NY) in 2020.

Unlike some pro-Israel organizations such as NORPAC and Pro-Israel America, DMFI has traditionally refrained from targeting Democratic incumbents, but the primaries in Michigan and Illinois in particular have created a pair of unique openings that the group is now seizing in hopes of removing two House members with whom it has found itself at odds on Middle East foreign policy matters.

While Levin, a former synagogue president, describes himself as a Zionist and opposes BDS, the Michigan political scion has frequently clashed with the pro-Israel establishment over his criticism of the Israeli government, including the recent introduction of legislation that would, among other things, condemn Israeli settlements while placing restrictions on U.S. aid to Israel.

Newman, for her part, assumed office last year after unseating former Rep. Dan Lipinski (D-IL) with backing from Justice Democrats. In September, she was among just eight House Democrats who voted against $1 billion in supplemental funding for Israel’s Iron Dome missile-defense system.

Last week, Newman’s approach to Israel came under increased scrutiny when a House ethics probe said it had uncovered “substantial reason to believe” that she had participated in an alleged bribery scheme by enticing an Israel critic with a position as her foreign policy advisor in order to avoid a Democratic primary fight in 2020.

Among the other candidates DMFI is backing are those competing in open-seat House primaries, including Randolph Bracy in Florida, Jane Hope Hamilton in Texas and Gilbert Villegas in Illinois.

DMFI’s new slate of candidates has arrived as a number of pro-Israel groups prepare to make endorsements in the primaries. Pro-Israel America, the bipartisan advocacy group, has already announced its support for several candidates, including Stevens and Maloney, and says there are more in the pipeline.

The Jewish Democratic Council of America released its first round of 2022 endorsements in November, including all of the 13 Senate Democrats who are up for reelection this cycle, but hasn’t yet made its preferences known on the House side.

AIPAC, which announced in December that it was launching a new PAC and Super PAC, a first for the Washington-based lobbying group, has yet to indicate which candidates will earn its support.

Mellman, for his part, said he had yet to finalize future rounds of endorsements amid questions over the ongoing redistricting process that have created uncertainties in several races across the country.

“There are obviously a number of incumbents who are longtime champions” of Israel “but aren’t facing primaries,” he added. “Their elections aren’t until November, so we have some time there.”

“But we’re not going to know where all those places are,” Mellman said, “until we get a little bit closer.”