In New York City’s only purple district, a first-term incumbent is in jeopardy 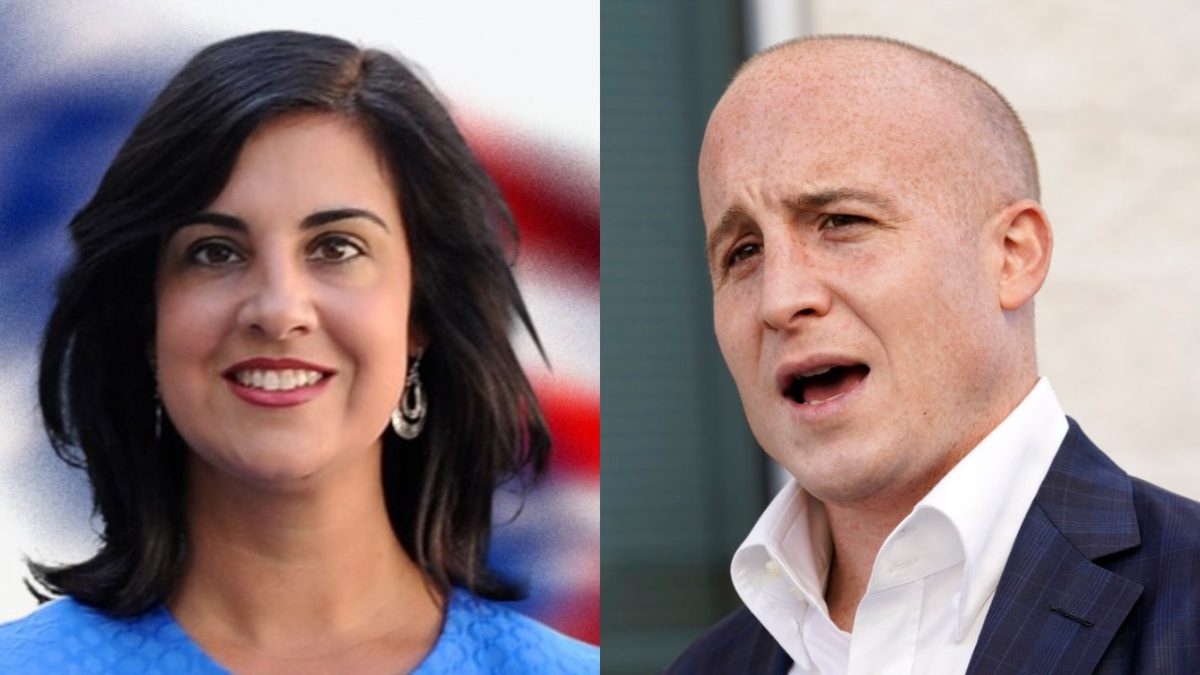 In an email to supporters this week, Rep. Max Rose’s (D-NY) campaign manager admitted that the first-term congressman’s seat in New York’s 11th congressional district is in danger of flipping.

“In the past few weeks alone, political experts at Roll Call, CNN, and now the National Journal have singled Max out as one of the most vulnerable incumbents anywhere in the country,” read the message. A similar email, sent out by the campaign of Nicole Malliotakis read, “Roll Call named Max Rose the 3rd most vulnerable member of the House.”

The emails underscore just how close the race has become in recent weeks ahead of Rose’s first reelection battle. The 11th district is considered the most conservative part of New York City — won by President Donald Trump in 2016 by 10 points — and one of the couple dozen districts the Cook Political Report rates a “toss-up.”

A NBC4/Marist poll released on Monday showed a neck-and-neck race, consistent with polling in recent weeks.

In a recent interview with Jewish Insider, Rose, a Purple Heart recipient and National Guard veteran of the war in Afghanistan, said he tries not to pay attention to the polls, instead choosing to focus on serving “the interests of my community, according to my own values and according to my never-ending commitment to give everything for this country, including my life. I will give my life to this country. I’m a patriot through and through.”

Ultimately, Rose believes that Republican and Democratic voters alike will appreciate that, despite his membership in the Democratic caucus, he “has been willing to stand up to both parties” when he thinks things in Washington are heading in the wrong direction.

Rose also prides himself on standing up for what he believes is right, regardless of which party originated the idea or legislation. He pointed to his support of Trump’s executive order to combat antisemitism on campus, issued last December, and his approval of the targeted killing of Qassim Soleimani, the commander of Iran’s elite Quds Force, earlier this year, as instances where he chose values over politics.

An elected official “can’t be thinking about parties, the polls, the next election and what your donors want,” Rose explained. “That very false commitment is why people hate politics. And when we talk about changing politics, that’s what we have to change.”

Malliotakis contested Rose’s effort to portray himself as an independent by highlighting his vote to impeach Trump as well as backing he received from a super PAC aligned with House Speaker Nancy Pelosi (D-CA). “It’s very disingenuous to tell the community that you are independent when you turn around and go to Washington and vote [96%] of time with Nancy Pelosi, including for the most partisan measure we’ve seen in years — which is the impeachment vote against the president,” Malliotakis told JI.

She further suggested Pelosi’s investment on behalf of Rose — who voted against Pelosi in her bid for House speaker last year — is an attempt to “save him because she wants to keep him as a rubber stamp” in Washington.

Outside political groups have been pouring millions into the race for the swing-district seat — adding to the string of attack ads the two candidates have aired. Rose outraised his opponent 3-to-1, raking in about $8.3 million, according to recent FEC filings.

In the interview with JI, Rose avoided attacking his opponent — a pivot away from campaign ads and viral campaign clips that targeted Malliotakis. “Service is a privilege for me,” Rose explained. “I count my lucky stars for the love and the support of my family and the commitment that the community has shown towards building a better country, and I just strive to be there for them. That brings great joy and a great sense of fulfillment.”

Both candidates have strong ties to the Jewish community and enjoy a nearly even amount of support among members of the large Sephardic segment of the community in the portion of the district that lies in Brooklyn, according to conversations with a handful of constituents.

For Rose’s supporters, his record speaks for itself. In his short time in Congress, the Democratic congressman has stood out as a staunch supporter of Israel and an important voice in the effort to combat rising antisemitism, which has included speaking out against controversial language used by members of his own party.

Rose has also earned points in the Orthodox Jewish community — which has aligned more with the Republican Party in recent years — by supporting the president’s executive order to protect Jewish college students, inviting the administration’s antisemitism envoy to the district and being openly critical of New York City Mayor Bill de Blasio.

Jack Ashkenazie, a community activist in Brooklyn, told JI that as a member of Congress, Rose “has shown his support for the issues that are important to us, and it’s prudent for us to support moderate Democrats who share our values.”

Ashkenazie, a registered Republican, said that the community is split in its support for Rose, largely because of his vote on impeachment. While the Sephardic Community Federation, based in South Brooklyn, endorsed a number of candidates for state office, it chose not to endorse either Rose or Malliotakis. Similarly, it did not make an endorsement in the presidential race.

But Ashkenazie said he’d vote for Rose as the incumbent, calling him “a staunch leader within his own party on the issues that affect us.”

“I can vote for President Trump, and I can also vote for Max Rose,” Ashkenazie told JI, “because it’s the right thing to do.”

Malliotakis has represented parts of Brooklyn and Staten Island in the New York State Assembly since 2010. She also ran for mayor in the 2017 election, losing to De Blasio by nearly 40 points, but winning her home borough. Malliotakis first visited Israel in 2019 with former Arkansas Gov. Mike Huckabee.

Former New York Assemblyman Dov Hikind told JI that he chose to endorse Malliotakis to take a stance against the rise in antisemitism, because when it comes to support for Israel, both candidates are on the same page. Hikind — who is not a resident of the district — suggested the incumbent hasn’t been forceful enough, just “fulfilling the most minimum requirements” to challenge the progressive members of his party.

“These days are different from normal days. During a time of unprecedented antisemitism, when people are concerned about their future, we need people who are dedicated and devoted to fight antisemitism and hate,” he explained. “And especially someone like Rose, with his background — he’s no pushover. He has a strong personality, he could have done so much more within the Democratic Party to take a stand against the hate that exists in that party.”

“Voters in this district deserve to know what values he’s referring to,” she said.

In a statement to JI, Rose said, “No one should compare anything to the atrocities of the Holocaust,” adding, “Nicole [Malliotakis] lacking the self-awareness to realize how offensive it is to lecture a Jew about the Holocaust demonstrates exactly who she is and why she doesn’t belong anywhere near Congress.”

In a recent letter of support for Rose, more than two dozen prominent members of the Jewish community in Brooklyn — including a number of Republicans — noted that “electing a Republican to Congress will guarantee that our voice remains in the minority for the coming years. Max unequivocally supports every piece of legislation promoting the US-Israel relationship, and we should support those who are fighting to keep the Democrat party firmly pro-Israel.”

But for some, Rose doesn’t deserve credit for the diplomatic successes of the Trump administration when it comes to Israel.

“To give him any credit for anything that happened to Israel in the last two years, while Trump was in office, it would be akin to thanking Pharaoh for letting the Jews out of Egypt,” Morris Benun, a local activist supporting Malliotakis, told JI.

In his interview with JI, Rose maintained that his support for Israel is absolute, regardless of who sits in the White House or has a majority in the House, pointing out that he’s a lead sponsor of a bipartisan House resolution that expresses support for the recently signed Abraham Accords. “It’s got to be ‘country first.’ You cannot be blinded by partisanship,” he explained. “When we change those two things, we will dramatically fix our politics for the better. And I believe with all my heart and soul, that that is the direction we’re gonna take this country.”

“That’s why I’m in Congress to focus on things like this. This is why I’m there,” Rose added.

Rose has put his bipartisan credentials on display as a member of the Problem Solvers Caucus, a group of 50 Republican and Democratic legislators who meet regularly and work to craft legislation that can garner support from both parties.

Asked whether she would join the bipartisan panel if elected to Congress, Malliotakis was noncommittal. “I’ll certainly look into it, but I have to learn more about every caucus and what they stand for” before making a decision, she said.

But she was quick to point out that as a minority member of the New York State Assembly, “I’ve been willing to cross party lines and work with my colleagues to achieve positive things, but at the same time, I’m going to hold anybody who is going to be hurting the people in my district accountable.”

Malliotakis was also reluctant to point to instances where she would stand with a future President Joe Biden if they are both elected next month. “We haven’t really heard much from Joe Biden, other than he is not going to support law and order fully, and that he’s going to raise taxes. But I think one example, both [candidates] said they want to preserve [health care] coverage for pre-existing conditions. That’s something that I agree with,” she said.