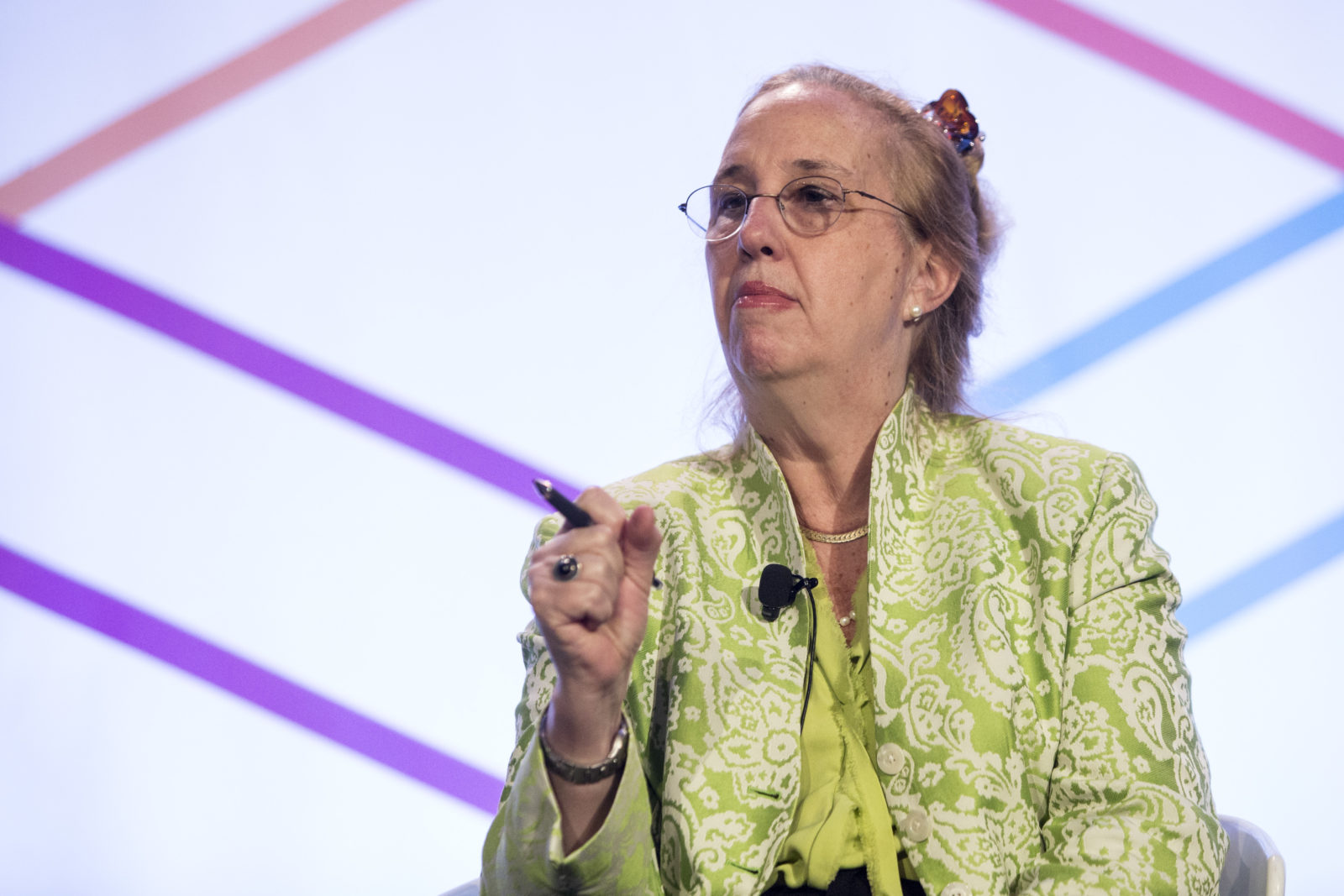 Brewer, the outgoing two-term Manhattan borough president, is returning to a vastly different Council than the one she occupied from 2002 to 2013

With two-thirds of the New York City Council’s 51 members stepping down next month, the legislative body is poised for more diversity than it has ever seen.

Among other historic firsts, the new class will include a Muslim woman, two openly gay Black women and a number of South Asian and Korean-American members. Women, for the first time ever, will hold a majority.

Gale Brewer, the outgoing two-term Manhattan borough president, is in many ways returning to a vastly different Council than the one she occupied from 2002 to 2013.

But the 70-year-old Democrat — a good-government workhorse whose round-the-clock commitment to constituent services has provided her with an unusually intimate understanding of Manhattan’s many problems — believes that some things never change.

“To be honest with you, the issues are the same,” she told Jewish Insider recently over breakfast at a retro-style diner on the Upper West Side, where she has lived for more than four decades. “I’m about the issues.”

As borough president, Brewer’s portfolio was somewhat limited because the role is largely ceremonial, including such duties as community board appointments and land use recommendations. Brewer says the role is, for the most part, what one makes of it, but the self-professed “budget nerd” admits that she is looking forward to rolling up her sleeves once again and working on more substantive matters.

“What I love about the City Council is the budget and hearings,” she said, tucking into a plate of sunny-side-up eggs. “I know that sounds strange, but I do love that. I love being in the constituent office.”

Brewer, who will represent her old district on the Upper West Side, is among a small group of incoming members who have previously served in the City Council. She had been term-limited when she left office in 2013 after 12 years holding the position.

But having completed two consecutive terms as borough president, Brewer was allowed to run for the Council seat again. She won her primary handily, fending off five opponents with nearly 54% of the vote, and sailed through the general election in November. Brewer will succeed Helen Rosenthal, who has held the seat since 2014.

Until recently, Brewer had been in the running for the City Council speakership, but she withdrew from consideration this week and threw her support behind Adrienne Adams, a Queens councilwoman who is one of two leading candidates in the race.

Brewer said she knows a number of the new members, many of whom are considerably younger than her, with whom she will serve in the Council. “A lot of them are super smart,” she told JI. “They may be, in some words, super progressive. But they also have strong academic backgrounds and strong policy backgrounds and they’ve worked in different places.”

“They got elected based, in some cases, on a strong work ethic,” she added. “I’ll work with anybody who’s willing to work and who is smart. You have to really do the work, and you have to really care.”

While she brings deep experience on such bread-and-butter issues as landmarks, public safety, zoning and schools, Brewer suggested that she is entering office with a sense of humility. “I don’t want to be the type of person who says I know a lot, because I don’t,” she said. “That’s not my style, I’m very low-key. But I’ll fight like a dog with a bone if it’s something I believe in, and people know that.”

Still, Brewer imagines that there will likely be some instances in which her colleagues can learn from her. “I love new ideas,” she explained. “We need new ideas in this city, and we have to implement them. That’s a little problem that I think I can address: ‘OK, that’s a great idea on green jobs, but how do you actually get it done?’”

Mitchell Moss, a professor of urban policy and planning at New York University, confirmed that claim in an effusive email to JI. “Brewer,” he said, “understands how to get important projects done and how to achieve critical policy goals with intelligent and patient leadership.”

During her time as borough president, Brewer maintained a constant, on-the-ground presence throughout Manhattan, earning a reputation for herself as an unusually attentive local elected official. The borough president opened a store-front office in Harlem, for instance, that she says allowed for a level of personal service her constituents have appreciated. “That helped for me to be considered [to be] what I think I am,” Brewer told JI, “which is very supportive and responsive.”

And perhaps even ubiquitous. Some have jokingly speculated that Brewer must have at least one clone given that her schedule so often seems impossible to maintain single-handedly.

“The joke among her colleagues is that she has impersonators that she sends out every morning to events and meetings,” Brad Hoylman, a New York state senator who ran unsuccessfully for Manhattan borough president in the Democratic primary last June, told JI. “Having a presence from Washington Heights down to the Battery and beyond is really part of the job, but she’s done it in an incredibly skillful and tireless way.”

If Brewer is always on the scene, it is likely because she feels there are too many problems and not enough time to address them all — and she indicated that the demands of the job had taken their toll.

At breakfast, Brewer, who had placed two cell phones on the table before her — one city-issued and the other personal — sounded mildly exasperated as she ran through her schedule for the day ahead. “It’s just like, how does it end up like this?” she said self-effacingly. “I have Zoom meetings on, like, a million problems until one, and then I have in-place [meetings] until 10 o’clock tonight. It’s horrible.”

“I get frustrated when I haven’t responded to problems,” Brewer added, “because people have so many problems.”

It is hard to imagine what else she would spend her time doing, though. Brewer estimated that she has only left the city once or perhaps even twice since the beginning of the pandemic in March 2020. “I don’t take much time off,” she said, noting that she does enjoy reading and bicycling with her husband, who is “very supportive.”

“The thing that most comes to mind about Gale is that she shows up,” Gideon Taylor, executive vice president of the Jewish Community Relations Council of New York, told JI. “The big events she shows up for, and she shows up for the small events, too. She’s there for conversations one-on-one. That’s what’s needed.”

Brewer has built close relationships with Jewish community leaders in Manhattan throughout a decades-long career in public service that extends back to the late 1970s, when she began a 12-year stint as Ruth Messinger’s chief of staff in the City Council.

The veteran public servant says she is often asked if she is Jewish herself.

“All day long,” said Brewer, who isn’t Jewish. “Upper West Side, you know.”

David Pollock, director of public policy and security at JCRC-NY, said that Brewer’s political base on the Upper West Side is “one of the most Jewish political geographies in New York City.”

“Throughout her career, she has a reputation for being everywhere: schools, shuls, churches, hearings and civic group meetings,” Pollock told JI. “Within the Jewish community she is equally comfortable working with Orthodox and progressive Jewish leaders so long as their goal is to better New York.”

Brewer has traveled to Israel a number of times, both as a private citizen and on sponsored trips with organizations like JCRC-NY. While she describes herself as a strong supporter of the Jewish state, however, Brewer said she anticipates that pro-Israel sentiment will likely face some resistance in the new Council.

In August of 2020, the New York City chapter of the Democratic Socialists of America distributed a questionnaire asking that City Council candidates pledge not to visit Israel if elected. Amid fierce backlash, including accusations of antisemitism, the group clarified that it was opposed only to sponsored trips with such organizations as JCRC-NY, which has been leading missions to Israel for more than two decades.

The DSA, which formally endorsed the Boycott, Divestment and Sanctions movement in 2017, helped elect two candidates to the City Council this year out of six it had endorsed in the primaries.

The City Council passed a resolution condemning BDS in 2016.

Brewer, who also opposes BDS, said she weathered conflicts over Israel during her previous tenure in the legislative body, not least when a former member, Charles Barron, drew controversy over comments in which he compared Israel’s actions in Gaza to Nazi Germany. Barron, who has spent the last seven years in the New York State Assembly, is also returning in January.

Though the Council wields no direct influence over foreign policy, Brewer believes that pro-Israel members will “have to be careful” given recent tensions in Congress that, she suggested, could trickle down to the local level.

Brewer said she had been surprised by opposition among some House Democrats to legislation that would provide supplemental funding for Israel’s Iron Dome missile-defense system. “I’ve been twice to Iron Dome locations, and they’re miraculous,” she said.

Still, the inveterate problem-solver believes there are limitations to what she can do personally to bring Israel critics to her side. “I’ll do what I can, but I can only do so much,” she said. “I can be just as progressive as anybody else.”

“Me telling them something is not going to work,” Brewer added. But Israel, she said, could prove instructive. “When I’ve seen some of the reports of people returning from Israel, particularly with JCRC,” she elaborated, “they see the absolute need to support the country.”

As attacks against Jews and Asian-Americans have increased across the city, Brewer believes that public schools need to step up when it comes to educating students about age-old hatreds.

“I don’t know how to approach it out on the street, but I do think the schools do nothing, and that’s where you have to do a lot more education,” particularly around the Holocaust, she said. “I don’t know what else to do. You need a leader.”

She speculated that Eric Adams, the incoming New York City mayor and current Brooklyn borough president, might be more effective in forcefully speaking out against antisemitic hate crimes than his soon-to-be predecessor, Bill de Blasio. “I don’t know how many people listened,” she said of the outgoing two-term mayor, who has developed strong relationships with Jewish leaders despite his low approval ratings.

On the other hand, “Adams knows enough about Brooklyn and the Jewish community there to say that on a regular basis,” Brewer said.

Brewer has, by her account, never considered running for mayor herself, nor does she ever plan to. “I like Manhattan,” she said simply, joking that she feels somewhat disoriented on rare visits to other boroughs like the Bronx or Brooklyn.

With just a couple of weeks remaining until she steps down from the borough presidency and transitions to the Council, Brewer said she will miss representing all of Manhattan, even as she is eager to engage in weightier policy discussions.

Yet Brewer indicated that she wasn’t feeling  overly sentimental about leaving the post. “I know the problems more than I know the people,” she said. “I know all the problems.”