Rep. Ilhan Omar’s primary challenger believes ‘strongly that we are in a position to win’ 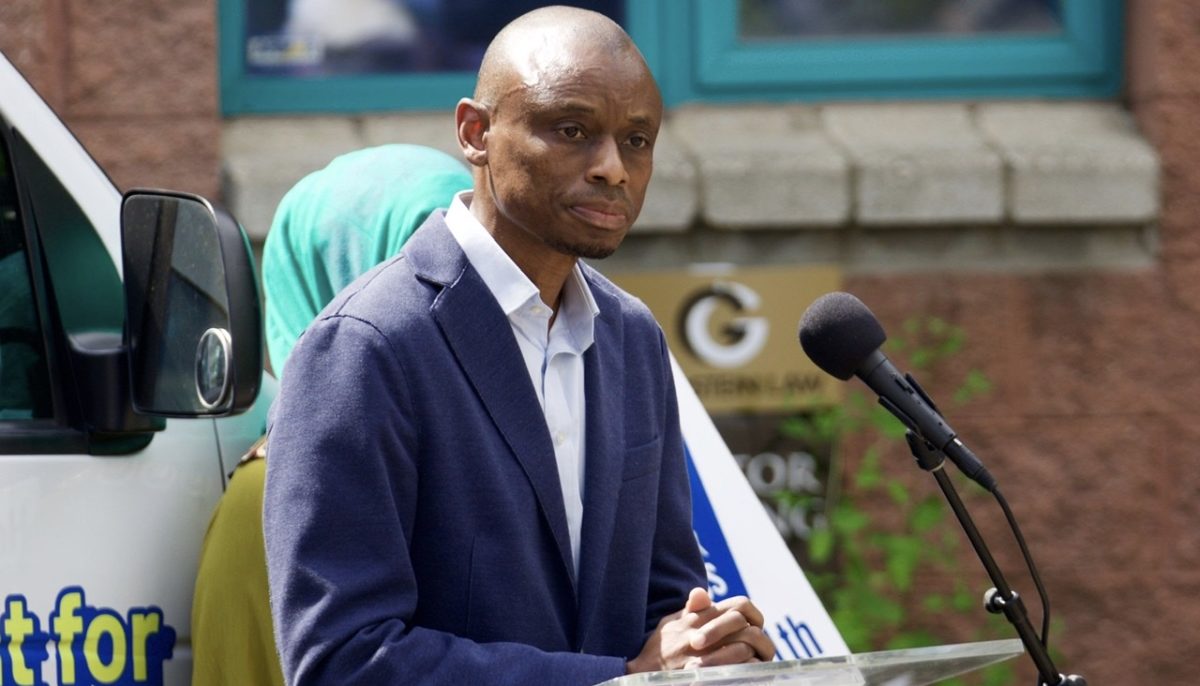 In the run-up to Tuesday’s primary in Minnesota’s 5th congressional district, freshman Rep. Ilhan Omar’s first-time challenger, Antone Melton-Meaux, is feeling confident that voters will give him a boost.

“I am pleased with the work that we’ve done throughout this campaign to connect with residents and to offer them an opportunity for change, and I think we were successful in doing that,” Melton-Meaux said during an interview with Jewish Insider late last week.

Melton-Meaux, a professional mediator, has run one of the most high-profile — and expensive — congressional bids this election cycle.

His staggering fundraising totals and rise as a viable candidate turned national attention to the Minnesota 5th primary. According to the most recent filings from the Federal Election Commission, the candidates for Congress in the district have collectively raised more than $13 million. Omar and Melton-Meaux each raised more than $4 million in the five-person Democratic primary.

“The amount that Antone raised made him a serious contender because he was able to match the money Omar had in her war chest,” Rabbi Avi Olitzky, a senior rabbi at Beth El Synagogue in St. Louis Park, told JI.

Last week, The Star Tribune — the largest newspaper in Minnesota — endorsed Melton-Meaux, noting that Omar’s early missteps, statements on Israel and campaign finance issues were a distraction for the district.

In an email to supporters of the Working Families Party on Sunday, Ocasio-Cortez suggested that Melton-Meaux “is being propped up by Republican Super PACs and GOP mega-donors who are threatened by our Squad’s collective power.”

The challenger laughed off Ocasio-Cortez’s accusation, saying Omar “clearly” has become part of the establishment in Washington, D.C. Touting his background as a mediator and a civic leader, Melton-Meaux said voters “just don’t want more dividers. They want people that are coming in with a commitment to the community, to build partnerships to get things done, and that’s why we’ve been so successful.”

Rhona Shwaid, a Minneapolis attorney who has known Melton-Meaux for several years, told JI that while Ocasio-Cortez and Tlaib are popular in their respective districts, Omar “has not been very connected to her constituents and they feel she hasn’t been representing their views.” Both Shwaid and Olitzky, who are supporting Melton-Meaux, said that the feeling within the district is that it’s a close race. “Everyone here is cautiously optimistic,” Shwaid said of Melton-Meaux’s Jewish supporters.

Jeremy Iggers, a Minneapolis resident who led a recent open letter signed by Jewish voters in the district who support Omar, told JI he’s concerned that the millions being spent on negative ads by outside groups could be effective. But he was hopeful that the ads might have the opposite effect on “people who are disgusted by this kind of politics.”

Melton-Meaux has been reluctant to attack Omar over her comments in early 2019 suggesting AIPAC was paying U.S. lawmakers to support Israel, but the issue resurfaced in the weeks leading up to the election. In a recent mailer, Omar’s campaign accused Melton-Meaux of being “in the pocket of Wall Street,” only naming three Jewish donors — Stanley Weinstein from Miami Beach, Blackstone’s Jonathan Gray and Boston hedge fund manager Seth Klarman. In a FAQ sent out in an email to supporters, Melton-Meaux said the campaign contributions he’s “received from the Jewish community” won’t “influence” his policy decisions on Israel, a statement for which he has apologized.

“We tried to answer that question just because we want to be forthcoming, but in doing so we conflated the notion of the Jewish community being focused on Israel, and I was wrong for doing that and I’ll continue to own up,” Melton-Meaux told JI. “When you make a mistake as an elected official, your job is to acknowledge it, to not make excuses, learn from it and move forward. That’s exactly what I did and that’s exactly what I’ll do going forward.”

Omar’s spokesman, Jeremy Slevin, told JI in a statement: “We’re confident we’re going to win. That’s because our district believes in the progressive values Ilhan fights for every day — the right for people to have healthcare, to have a roof over their head and to afford an education. Despite being subject to routine threats and bigotry from the president of the United States and his supporters, Ilhan Omar refuses to cower — and continues to fight for a more equitable America.”

To those who think he has not been aggressive enough to take on a vocal candidate like Omar, Melton-Meaux says, “Whether you are a politician, a teacher or a doctor, you always have to be who you are, because people resonate with authentic individuals. I am an authentic person that believes in working hard to bring people together and to get things done.”