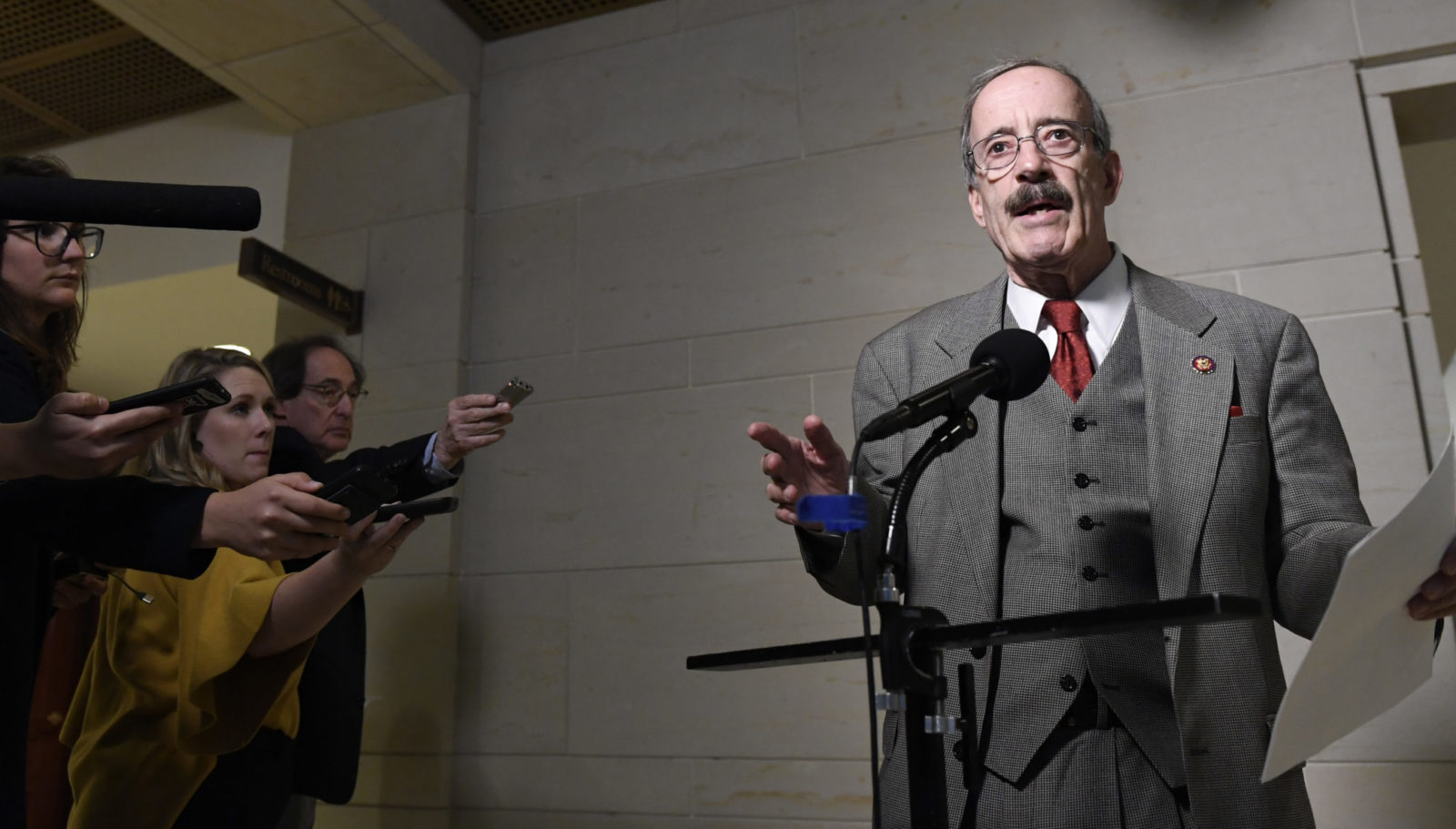 Is Eliot Engel in trouble?

A little more than three decades ago, Rep. Eliot Engel (D-NY) ascended to the House of Representatives from his seat in the New York State Assembly when he defeated Mario Biaggi, the long-serving Bronx congressman, in the Democratic primary.

Engel, 73, is now one of the most powerful Democrats in Congress as the chair of the House Foreign Affairs Committee. His current agenda items include leading an investigation into President Donald Trump’s recent decision to fire the State Department’s inspector general.

Though polling in the district is scarce, a September 2019 survey from the left-leaning think tank Data for Progress suggested that, while constituents still favored Engel by a margin of 19%, six out of 10 voters weren’t sure who they’d support in the June 23 primary. Bowman’s odds received a boost on Monday when another of Engel’s far-left challengers, Andom Ghebreghiorgis, dropped out of the race and endorsed Bowman.

“I have faith that Jamaal can deliver a progressive win and unseat Rep. Engel,” Ghebreghiorgis said in his announcement.

Bowman, too, is optimistic that he can defeat Engel, despite the coronavirus pandemic, which has disrupted primary elections around the country. “We feel that our prospects are still very strong,” he told Jewish Insider. “We’ve done a good job and worked really hard to build good relationships with voters all across the district from the very beginning.”

Bowman, who lives in Yonkers, touts his connections in the 16th congressional district, which covers portions of the Bronx and Westchester and includes New Rochelle, the initial epicenter of the coronavirus in New York.

“We’ve been canvassing and phone banking and engaging the district since then, very, very urgently and aggressively,” said Bowman, the founding principal of the Cornerstone Academy for Social Action. Bowman has raised more than $500,000 in his effort to unseat Engel, according to Federal Election Commission filings.

Bowman alleged that Engel has been absent from the district. “If you’re going to represent the district, you should be present in the district physically,” he said. “It’s hard to understand the magnitude and the gravity of this pandemic if you’re not here, particularly considering that this district was hit first.”

But Engel takes issue with that characterization. “First of all, how would he know?” the 16-term congressman said in a recent conversation with JI. “I don’t recall him ever doing one thing in the district in terms of working with communities. He’s done his education stuff, that’s for sure.”

“I just think that he was a teacher,” Engel added, sounding annoyed by his challenger. “You know what? I was a teacher too. And he was a guidance counselor, I believe. So was I. But I do think that you have to convince the people that you have something for them, not just — ‘Well, I want to be a congressman, so who’s ever in that seat now I want to throw out because I deserve it.’ I mean, he just hasn’t been around. People don’t know him.”

Randi Weingarten, president of the American Federation of Teachers — which has endorsed Engel — disputed Bowman’s claim as well. “I’ve found he’s a phone call away,” she said, adding that as recently as about two weeks ago Engel helped secure funding for New York public schools in the $3 trillion House relief bill known as the Heroes Act.

A dilemma for Engel, Weingarten said, is that high-ranking House members need to spend time on congressional leadership issues in Washington, D.C., as well as tending to local issues. “Take people like [Reps.] Jerry Nadler and Hakeem Jeffries, where they’ve had to be in Washington a lot more than they wanted to,” she told JI, noting that Engel was in the same boat.

Weingarten knows Bowman personally and says she admires him. She describes the congressional challenger as “an up-and-coming, wonderful advocate and activist” with a future in politics. “But the issue now is Eliot Engel has been running a marathon. He’s a former educator. We have endorsed him repeatedly because he’s earned that trust.”

Bowman’s criticisms of Engel have also centered on the congressman’s foreign policy. Engel opposed the Iran nuclear deal and is a staunch supporter of Israel — stances that have made him unpopular among some progressives, even as Engel has supported pet causes of the party’s left-leaning wing including Medicare for All and the Green New Deal.

Waleed Shahid, a spokesman for Justice Democrats — which has called Israel a “human rights violator” — said Engel’s hawkish record has alienated him from his constituents.

“I think there is a large subset of voters who feel that his priorities are on issues that don’t seem to impact them, such as taking taking fairly bold stances on foreign policy,” he told JI, “rather than on bold stances related to domestic concerns around the need for healthcare and housing and jobs in the district.”

Bowman supports rejoining the Iran deal and advocates for a two-state solution to the Israeli-Palestinian conflict, while arguing that the United States should condition aid to Israel.

“This is not about singling out Israel and targeting Israel,” said Bowman, who noted he does not support the Boycott, Divestment and Sanctions movement. “This is about any country that we provide aid to that’s committing human rights violations — we need to have a conversation about conditioning some aid if those violations continue.”

Bowman believes that his views on Israel do not differ all that drastically from his opponent’s.

The congressional hopeful singled out Israeli Prime Minister Benjamin Netanyahu for condemnation, arguing that his “aggressive policies toward the Palestinian people, particularly around occupation, annexation and the detaining of Palestinian children,” were unacceptable.

“I may be just more open to having those conversations about the humanitarian crisis happening in Palestine than Eliot Engel has been all through his career,” Bowman said.

Engel vehemently disagreed that Bowman’s approach to Israel was anything like his own.

“I would certainly regard him as anti-Israel,” Engel told JI. “Conditioning aid for Israel is one of the stupidest things I’ve ever heard. Foreign aid doesn’t only benefit the countries that we are giving it to — it benefits the United States.”

“This nonsense about conditioning aid is a bit arrogant,” Engel added, “because we’d essentially be telling Israel, if you don’t toe the mark, if when we crack the whip you don’t jump, we’re gonna pull it away from you. That’s not how one ally treats another ally.”

Engel, who considers himself to be the strongest supporter of Israel in Congress, suggested that Bowman was ill-informed when it came to the Middle East and Israel — and that he was regurgitating talking points he had learned in order to campaign.

“I’d be happy to teach him if he’d like to learn,” Engel told JI.

But Rachel McCullough, political director of the Jewish Vote, which has endorsed Bowman, said the former school principal was well-attuned to issues of concern in the Jewish community. She recalled the time, not too long ago, that she shared with him a paper on antisemitism published by Jews for Racial and Economic Justice, a sister organization of the Jewish Vote that has characterized BDS as “a powerful tool and successful strategy of nonviolent resistance.”

“Jamaal took it home and read and responded to me, and he sent me an email that was like a book report,” McCullough said.

Still, Halie Soifer, executive director of the Jewish Democratic Council of America, said she believes Bowman’s views should concern those who support Israel. “It seems that the very far left, in this case, is attempting to exploit the issue of Israel to create a wedge,” she told JI.

“What’s notable about this race versus many of the others we’re watching is that Israel does appear to be a distinction between these two Democratic candidates,” said Soifer, whose organization endorsed Engel. “You don’t see that in a lot of races. And it’s clear that Bowman has a very different view, which is why we thought it was so important to come out publicly in support of Chairman Engel.”

Hank Sheinkopf, a veteran campaign consultant in New York, said an Engel defeat “would be a great blow to the pro-Israel community.”

Engel has raked in more than $1.6 million in donations and notched a number of key endorsements, including one this week from Sen. Kirsten Gillibrand (D-NY), who described the long-serving congressman as “one of the most effective advocates in Congress for his constituents and all New Yorkers.”

Shahid of Justice Democrats predicts that Bowman’s effort to unseat a longtime incumbent such as Engel will be successful this election season, though several candidates supported by the progressive organization have failed to move past their primaries this year, including Morgan Harper in Ohio and Jessica Cisneros in Texas.

“There were a series of issues that made him vulnerable,” Shahid said of Engel, “the primary one being that he was perceived as being absent.”

For his part, Engel doesn’t appear to be taking his seat for granted. “Everybody who runs for office has to be prepared for someone to challenge them. It’s not my seat or somebody else’s seat — it’s the people’s seat,” he said in the conversation with JI. “I’m more than ready to defend my record.”

It is unlikely that Engel will go down this round, according to Sheinkopf, even in an unpredictable election year that has been unsettled by mass protests and a deadly pandemic.

But Sheinkopf was agnostic when it came to Engel’s primary chances beyond this year.

“Might he be beaten in the future?” Sheinkopf asked. “The answer is, it’s not impossible.”