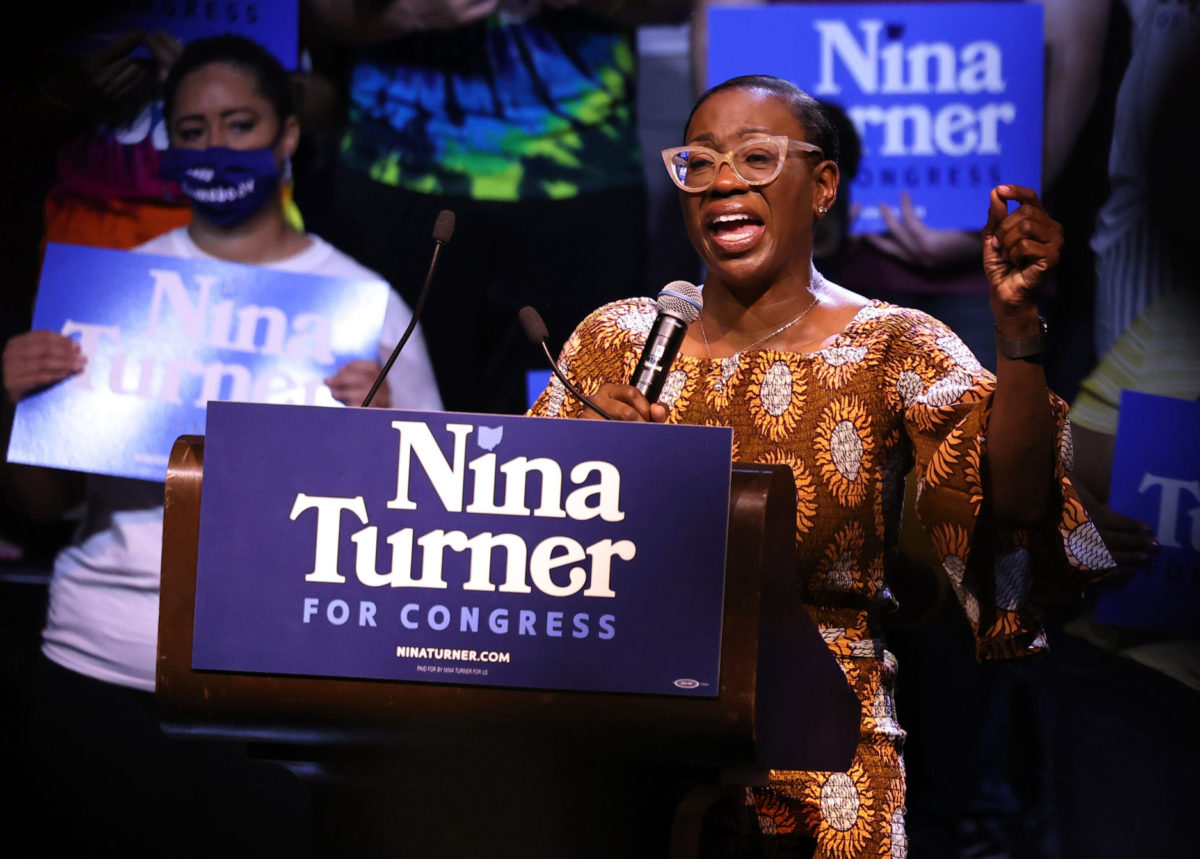 Nina Turner speaks during a Get Out the Vote rally at Agora Theater & Ballroom on July 31, 2021, in Cleveland, Ohio.

The sun had barely risen on Wednesday morning, but Pinchas Landis, an Orthodox Jewish rabbi from University Heights in suburban Cleveland, was already fielding a cascade of text messages as media reports of a surprise rematch between Nina Turner and freshman Rep. Shontel Brown (D-OH) began circulating among members of his community.

Turner’s announcement arrived only five months after Landis had helped unite large segments of Cleveland’s sizable Orthodox community in opposition to the former state senator and progressive stalwart, largely over views she expressed last year during the course of her campaign that many Jewish voters saw as hostile to Israel.

With just over three months remaining until the scheduled May primary, Landis told Jewish Insider that he was “springing to action” hours after Turner declared her primary challenge. But he also voiced a note of optimism that Brown, who received widespread support from the local Jewish community and positioned herself as a friend to Israel, would have no trouble defending the seat.

Such assertions of confidence were somewhat harder to find at the beginning of the race a year ago. In her stunning upset over Turner on election night last August, Brown overcame an initial polling deficit of more than 30 points in the hotly contested special House election to succeed Rep. Marcia Fudge (D-OH), who vacated the seat for a Cabinet position in the Biden administration.

In an interview last week on JI’s “Limited Liability Podcast,” Brown credited the Jewish community with helping her “get over the finish line” in a tight race. “This was an organic, authentic relationship that had been forming for years,” said Brown, who prevailed over Turner by a margin of six points. “I have been working in the community as a legislator for nine years, six of them as a county council representative representing communities with a significantly large Jewish population.”

Brown outperformed Turner in heavily Jewish enclaves of Ohio’s 11th Congressional District, including Shaker Heights and Beachwood, which saw some of the highest turnout in the race. The majority-Black district, which is home to an estimated population of 22,000 Jewish voters, currently encompasses Cleveland as well as a sliver of Akron and the suburbs in between. While the boundaries have remained unsettled since the state Supreme Court struck down a GOP-drawn map as unconstitutional in mid-January, the redrawn district is expected to take in more of Cleveland.

The race was widely viewed as Turner’s to lose thanks in part to her high name recognition throughout the district as well as her status as a former presidential campaign surrogate for Sen. Bernie Sanders (I-VT), which would help activate a national grassroots fundraising network she used to establish an early cash advantage.

But now, some political observers in Cleveland believe the reverse dynamic is more likely to play out as Turner mounts her comeback campaign during an election year in which Democrats will presumably be tending to more immediate concerns as they seek to defend their tenuous majority in the House.

“Let’s face it, there are bigger fish to fry,” David Cohen, a professor of political science at the University of Akron’s Ray C. Bliss Institute of Applied Politics, told JI. “This is a very steep uphill battle for her,” he said of Turner. “I just don’t see how she’s going to make it to the summit.”

Jeff Rusnak, a Democratic strategist in Cleveland who supported Brown in the primary but wasn’t involved with her campaign, agreed. “Maybe it’s kind of odd for Nina to pick this fight at this moment,” he mused. “I think it’s a lot tougher now than it was last year.”

“She’s decided to run when you have an incumbent who is serving and doing a very solid job and performing and making important votes,” he said, arguing that voters in the district “don’t need any more divisiveness” after a bruising primary that played out prominently on the national stage.

In the final weeks of the race, a number of leading Democrats, including House Majority Whip Jim Clyburn (D-SC), in Brown’s camp, and Rep. Alexandria Ocasio-Cortez (D-NY), backing Turner, descended on the district in a high-profile showdown between competing moderate and progressive factions within the party.

In a statement provided by Brown’s campaign, the congresswoman, 46, touted her efforts to advance the policy objectives of the Biden administration since she entered the House more than two months ago after coasting through the general election in the heavily Democratic district.

“I hit the ground running, and I look forward to continuing to fight and deliver for the 11th Congressional District,” said Brown, who emphasized that she had voted in favor of the $1 trillion infrastructure package that passed the House with overwhelming Democratic support last November.

Turner, for her part, opposed immediately approving the infrastructure package, aligning herself with the group of Squad members in the House who voted against the funding in protest of the Senate’s delay in passing a broader social safety net and climate package.

“These are unprecedented times,” Turner, 54, said in a campaign kickoff video she shared with her more than 500,000 Twitter followers on Wednesday. “Our leaders can’t settle for ‘just enough.’ They must fight for what we deserve. I’m Nina Turner and I’m running for Congress because we deserve a voice for change in Washington.”

The two candidates’ opposing views on infrastructure in particular may come into focus as the primary heats up, experts who spoke with JI predicted, because the issue illustrates a key difference between their approaches to Democratic cooperation. Last cycle, Turner struggled to recover from past comments in which she had suggested that voting for Joe Biden was akin to eating a “bowl of shit,” while Brown, a former Cuyahoga County councilwoman and party chair, presented herself as faithful to the Democratic establishment.

Such contrasts also took hold around Middle East foreign policy, particularly during the May conflict between Israel and Hamas. As Brown expressed support for Israel’s “right to defend its citizens,” Turner shared a social media post likening Israel to an apartheid state that alarmed a number of Jewish voters in the district.

Earlier in the race, Turner had also endorsed conditioning aid to Israel, echoing calls from some far-left members of Congress who have criticized U.S. funding for the Jewish state.

“Nina Turner deciding to run against Shontel demonstrates how out of touch she is with the district’s constituents, especially after blaming ‘dark money’ for her last loss,” said Jessica Cohen, an Orthodox resident of Cleveland Heights who campaigned for Brown last summer.

Turner has spoken out against political action committees that poured money into the race, including Democratic Majority for Israel (DMFI), which spent more than $2 million on Brown’s behalf. During her concession speech last August, Turner alleged that “evil money” had “manipulated and maligned” the election, drawing scrutiny from critics who charged that she had promoted an antisemitic trope, though her campaign later clarified that she had been referring to “corporate” and “Republican money.”

Cohen wasn’t buying it. “Nina’s dog whistles and her antipathy to Cleveland’s Jewish community will not be forgotten,” she said.

“Nina Turner continues to oppose the money that came into her special election race from Republican and Trump-aligned sources,” Kara Turrentine, Turner’s campaign manager, said in an email to JI on Wednesday. Turner “will continue to fight against the rising tide of hate, division and racism fueling the growing number of antisemitic attacks across this nation.”

Marty Gelfand, an attorney and Jewish community activist in Cleveland Heights, supported Turner in the primary and believes she was treated unfairly by outside groups during the election. “I do think that she was defamed in the last primary race by a lot of dark money,” he said.

Despite some reservations about opposing a Democratic incumbent, Gelfand suggested that he was considering backing Turner again in the midterms because he thinks so highly of her. “I intend to speak with Nina in the near future about what her thoughts are,” Gelfand told JI, “and then I’ll make a decision.”

In an interview with JI last February, A.D. Motzen, the former Ohio regional director for Agudath Israel of America who is now the group’s national director of state relations, described Turner as attentive to the needs of Orthodox constituents, particularly around school choice, when she served as a state senator in Cleveland between 2008 and 2014. “This came from her belief in helping struggling families in her district to get the education they needed,” he said shortly after Turner announced her candidacy in the special election.

How the Ohio 11 election went against the grain

Turrentine said the campaign “intends to reach every person, every family and every community” within the newly drawn district, the lines of which the Republican state legislature has until Feb. 13 to enact following the first map’s rejection..

Meshulam Ungar, a student at Brandeis University who is originally from Maryland and helped canvass for Brown last summer in Orthodox communities throughout the suburbs of Cleveland, said he expected “that the Jewish community that came out for” Brown “in 2021 will come out in 2022” as well.

Pro-Israel groups that backed Brown last cycle also expressed their continued support for the congresswoman. Mark Mellman, the president of DMFI’s political arm, said Brown “has proven to be an effective advocate for Northeast Ohio and for the Democratic agenda.”

Jeff Mendelsohn, the executive director of Pro-Israel America, the bipartisan advocacy group whose political arm raised $800,000 for Brown’s campaign last year, said his organization is “proud to support” the congresswoman as she seeks her first full term in the House. “We look forward to mobilizing our community again,” he told JI.

The Jewish Democratic Council of America also endorsed Brown in the primary but did not respond to an email inquiry from JI about future support.

It remains to be seen whether Turner will garner support from such influential progressives as Sanders and Ocasio-Cortez now that Brown has joined their ranks in Washington.

Speaking with JI’s “Limited Liability Podcast” last week, Brown described her relationship with the Squad as “collegial,” noting that there have been “some areas” where they have been able to work together. “Where there are areas that we are unable to work together, I hope to be able to convince them to maybe change their opinions about things,” Brown said. “It’s a work in progress.

A spokesperson for Justice Democrats, the left-wing political group that endorsed Turner last year and has frequently targeted Democratic incumbents, did not respond to a request for comment.

With several important primaries now on the horizon, it is also an open question as to whether individual campaign contributions and other spending from outside groups will flow as freely into the race again. Last year, millions of dollars supporting both Brown and Turner poured into the district.

Turner’s campaign said on Thursday that she had raised more than $100,000 on the first day of fundraising.

By comparison, Brown was sitting on more than $276,000 as of mid-November, according to the most recent filings from the Federal Election Commission.

Not long after Turner announced her candidacy, DMFI’s political arm indicated a measure of caution in an email blast on Wednesday afternoon, including a bright-red siren emoji in the subject line that suggested the pro-Israel group was still keeping a vigilant eye on the race as it asked that supporters kick in a donation.

“While we have many tough fights ahead to defeat extreme anti-Israel candidates,” the message warned, “Nina Turner leads the pack.”