The progressive Democrat downplayed the threat of left-wing antisemitism, arguing Jews should unite with progressive activists 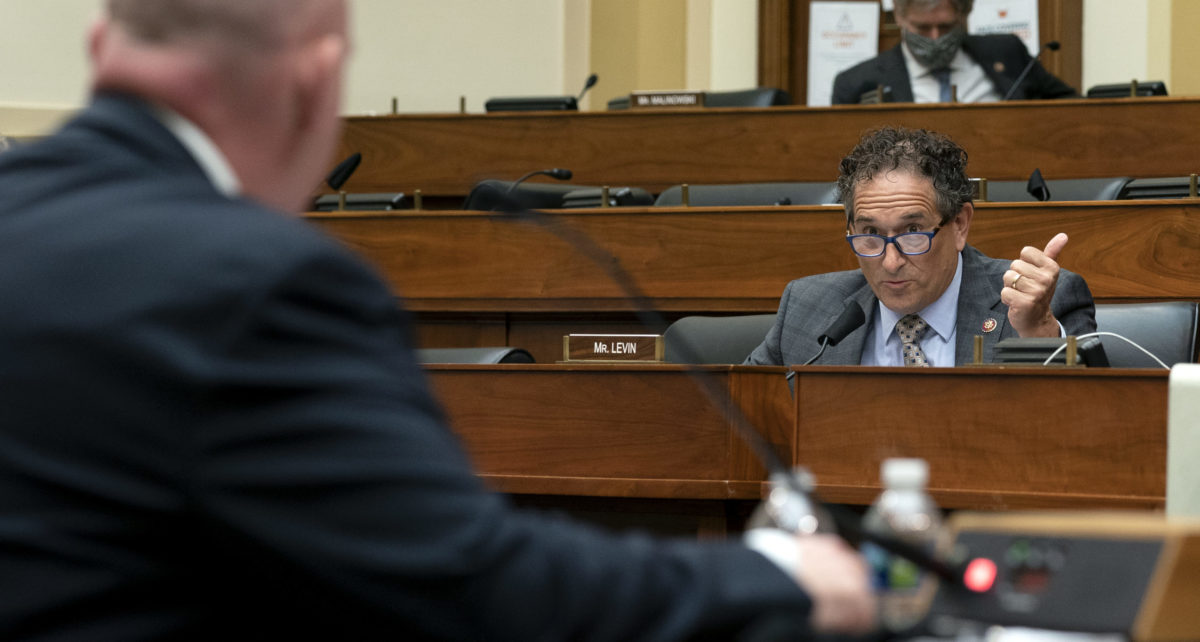 Rep. Andy Levin (D-MI) has been in Congress for only two years, but the former union organizer and Michigan labor official has distinguished himself in both the Democratic Party and the Jewish community.

Unlike many of his fellow Jewish lawmakers, Levin argues that antisemitism is not a serious issue on the left, strenuously defends colleagues Reps. Ilhan Omar (D-MN) and Rashida Tlaib (D-MI) against accusations of antisemitism and allies himself closely with progressive activist movements.

At home, the congressman radically overhauled his Detroit synagogue to focus on progressive activism and social justice issues, and founded a Jewish activist organization with the goal of reframing Jewish identity in his community. His outspoken advocacy on behalf of Palestinians has put him at odds with some in the Detroit Jewish community.

In a lengthy interview with Jewish Insider last week, the Michigan congressman said that attempts to equate left- and right-wing antisemitism represent a “breathtaking” false equivalence. Levin sought to back up his argument by citing the Tree of Life Synagogue shooting in Pittsburgh, the Unite the Right rally in Charlottesville, and claims by former President Donald Trump that George Soros was responsible for a range of false conspiracies.

“I don’t really [think left-wing antisemitism is an issue],” Levin said initially, then continued, “On one level, yes, it’s an issue everywhere. Because antisemitism is so alive in this world. And I think like other forms of bigotry and othering of people — many folks aren’t aware of that, even. It’s not to say there isn’t.”

Accusations of antisemitism against the left, Levin said, are “part of a larger machinery to stoke fear and division and, in particular, to divide progressive forces.”

The congressman, who was elected in 2018, explained that he believes Jews “can’t win the battle against antisemitism unless we Jews fight against racism against Black people, against Islamophobia, against anti-LGBTQ feelings, against anti-immigrant xenophobia,” adding, “the progressive community is the community that’s leading those fights.”

Levin attempted to address concerns about comments made by progressive activists and legislators by defending Tlaib, the Palestinian-American congresswoman who represents another Detroit-area district.

“I’ve known Rashida since long before either of us thought about running for Congress. And she has been a comrade in the battle for racial and economic justice,” he said. “Rashida is not antisemitic, full stop. Full stop. Rashida has no use for [Nation of Islam founder Louis] Farrakhan, full stop.”

Tlaib published a column on The Final Call, a blog founded by Farrakhan, in 2006, but claims no personal ties to the controversial preacher.

Levin pivoted to Tlaib’s views on Israel, explaining that he does not believe people should “demonize” Tlaib over her support for a one-state solution.

“I think that to have this Jewish boy and Palestinian girl in Congress from Detroit, who can model a relationship of soulfully and authentically representing our communities and having a solid relationship with each other, bodes well for actually achieving a just solution to the Israeli-Palestinian conflict,” he said.

Pressed on comments that Omar made prior to taking office — specifically a tweet claiming that “Israel has hypnotized the world,” echoing an antisemitic canard about Jews controlling the world — Levin demurred.

“I don’t know what she said or everything she did back in the day. And I don’t accept somebody saying that at all,” he said. “I’ve talked to her. And I want to build a relationship with her, where I feel like I can help her understand my reality, and she can help me understand her reality. And I think that’s the best way to build support for the Jewish people and build understanding of antisemitism.”

Levin suggested that some on the left may not even be aware they are employing antisemitic language, explaining that “we all have a lot of learning to do.”

“We have to approach each other with humility and respect and love,” Levin said. “But we have to be clear about what hate speech is, and hate groups are and what they’re not.”

Levin has a long pedigree in Michigan politics. He is the son of former Rep. Sander Levin (D-MI) and the nephew of longtime former Sen. Carl Levin (D-MI). The two-term congressman insists that he has been “super proactive about antisemitism and antisemitic language or tropes that may come up in Congress.”

In 2019, Levin helped organize a meeting between Jewish and Muslim members of Congress in the wake of divisive comments made by Omar weeks into her first term. The meeting turned sour after a fellow Jewish member of Congress, Rep. Dean Phillips (D-MN), asked Omar to apologize for her past comments — a request Levin said “kind of misread the room.” Levin nevertheless characterized such meetings as effective, noting that he was not aware of similar accusations of antisemitism since then.

Levin has sought to distinguish himself as a vocal advocate for both the State of Israel and for Palestinian rights. The congressman, a member of the House Foreign Affairs Committee, praised President Joe Biden and his advisors as strongly placed to make progress, given their foreign policy backgrounds.

Levin laid blame on both sides, claiming that “the Palestinian Authority doesn’t have a lot of legitimacy in the minds of the Palestinian people” and that Israel needs “a government that is a little bit more stable.”

“I hope there can be some new actors on the scene who will be really committed to [solving the conflict],” Levin continued, “because we haven’t always had that on the two sides.”

Levin said that, prior to visiting Israel in 2019, he was concerned that Israeli settlement expansion may have foreclosed a two-state solution. But meetings with both Israeli and Palestinian leaders convinced him that it was not only possible, but critical.

“There are tremendous barriers, but I just don’t think we can achieve the Zionist dream — which I believe in, deeply — of a democratic and safe homeland for the Jewish people in Israel unless we find a way to help the Palestinian people realize their political aspirations of having a Palestinian state that’s actually there.”

Levin — who recently said on an IfNotNow webinar that “unless Palestinian human rights are respected, we cannot fight antisemitism” — called annexation and settlement expansion counterproductive to the peace process.

Under Biden, he added, the U.S. should engage in a multilateral push toward restarting negotiations, rebuilding its relationship with the Palestinians, supporting democracy in both Israel and the Palestinian territories and setting concrete goals for the peace process.

On Iran, Levin said the U.S. shoulders significant blame for the current tensions between Washington and Tehran, attributing the frosty relationship to the U.S. withdrawal from the 2015 nuclear agreement.

“By all accounts, Iran was doing what it was supposed to do when we left,” Levin said, though Israeli intelligence reports from 2018 dispute that premise.

Biden is “doing a good job” of attempting to balance competing concerns and work toward rapprochement with Iran, Levin continued, hinting at efforts “behind the scenes diplomatically” to “work with our allies and even people who aren’t so much our allies to find a way forward.” He added that he could not discuss those efforts further. Chinese officials said they have spoken with Iran envoy Rob Malley, although the U.S. government did not comment on the call.

While Levin stopped short of directly encouraging Biden to unilaterally roll back U.S. sanctions against Iran, he indicated that he was not entirely opposed to the concept.

“Since we’re the ones who left [the deal], it’s kind of reasonable for other parties that say, ‘Well, if you want to get back in this agreement, get back [into] the agreement, and then we’ll go from there,’” he said. “But they have a little more ambition in what they’re trying to accomplish with Iran. I think that’s a difficult but a laudable position to take.”

At the core of Levin’s work is his commitment to social justice. He explained to JI that he sees his progressive ideals and his Judaism as deeply linked. Although his family was “not very observant” when he was young, he faced antisemitic taunts as a child in a neighborhood with few Jewish families; other children targeted him with comments like “You can’t be Jewish, you don’t have horns” and “You’re Jewish, you killed Jesus.”

He later went on to become the president of his local synagogue and serve on its board, as well as found Detroit Jews for Justice, an activist group focusing on social, racial and economic justice in Detroit. He also “re-envisioned” his synagogue — which had a small and aging congregation when he joined — as “the social justice shul.”

He compared this approach to churches in the Black community, which often prominently incorporate political and social discourse.

“My Judaism is all about justice.”