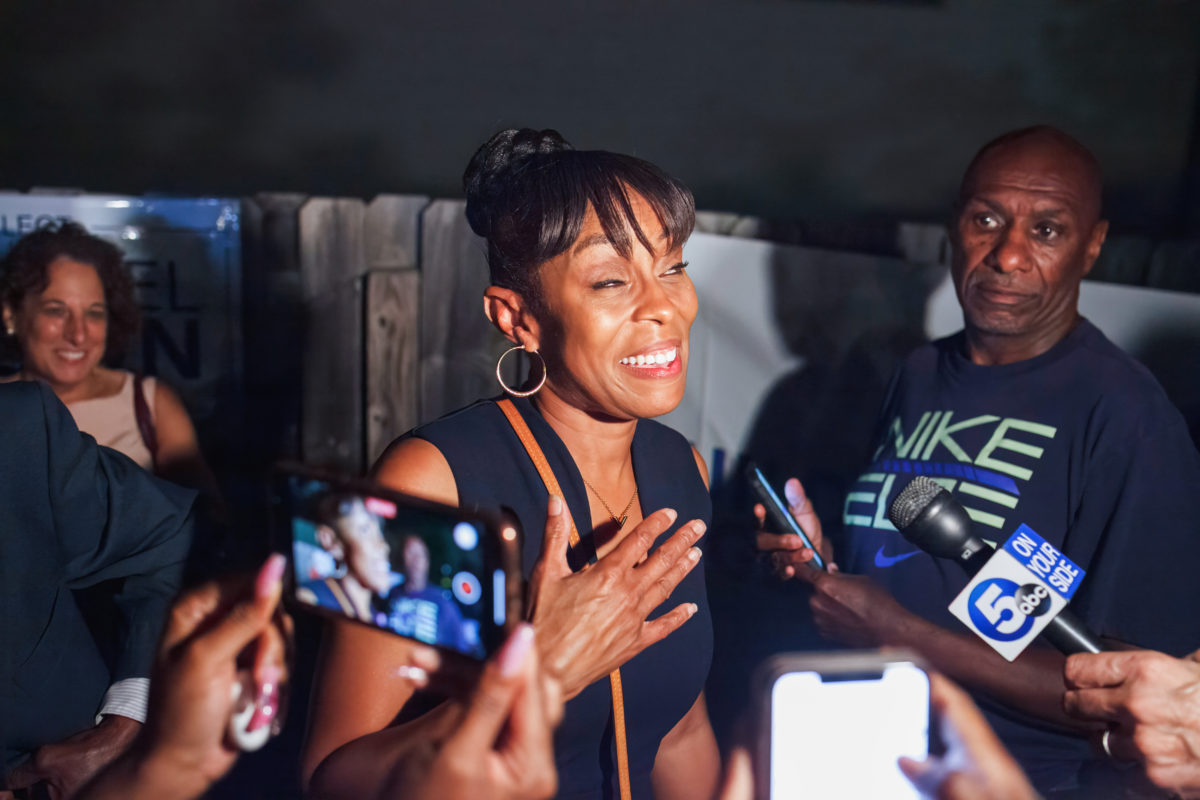 On the night of her election win in the primary race to succeed now-HUD Secretary Marcia Fudge in Ohio’s 11th Congressional District, Rep. Shontel Brown (D-OH) — then a former Cuyahoga County Democratic Party chair — spoke before a crowd of supporters assembled outdoors, thanking them for their help in her come-from-behind win against former Ohio state Sen. Nina Turner. In her off-the-cuff remarks that night in August, Brown, who would go on to defeat Republican Laverne Jones Gore in the general election, made sure to thank “my Jewish brothers and sisters” who had played a role in her victory.

“This was an organic, authentic relationship that had been forming for years. I have been working in the community as a legislator for nine years, six of them as a county council representative representing communities with a significantly large Jewish population,” Brown said during an appearance on Jewish Insider’s “Limited Liability Podcast” on Tuesday.

Nationally, last year’s off-cycle primary race was widely characterized as a battle between the progressive and moderate wings of the Democratic Party. But speaking on the podcast, Brown maintained that framing had little bearing locally. “I think that the local race was really about results. It didn’t get into this progressive-moderate issue,” she said. “I know the national narrative was different. But it definitely, on the ground, was about who has been doing the work and who has been delivering for the people. And I think that is why I was able to earn the support of so many local elected officials in this race.”

Brown’s public support for the U.S.-Israel relationship and her opponent’s critiques of the Jewish state played a prominent role in the race. “It got pretty, I would say, rough at times,” Brown said of the campaign. “But for me, it was an easy, clear decision,” Brown maintained, noting that her 2018 trip to Israel helped her form a better understanding of the region.

Following the intense fighting between Israel and Hamas in May, U.S. support for Israel became one the most contentious issues of the race. Local and national pro-Israel groups boosted their support for Brown.

When asked by podcast co-host Richard Goldberg about Turner’s “concession speech,” in which Turner largely avoided conceding, Brown quickly quipped, “Was it?” In that speech, Turner drew criticism for claiming, “We didn’t lose this race, evil money manipulated and maligned this election.”

Asked on Tuesday about her opponent’s remarks, Brown sought the high road. “I am a person that likes to focus on the positive. I am one that has not really engaged in that type of rhetoric or even acknowledged it in that way, because we know that good, certainly, won over evil in that race,” Brown said.

“When I hear things like that, I gotta, you know, just pray for my enemies. That’s all I can say is pray for the enemies and hope that the Lord blesses them in a way that they will be too busy to focus on me,” she added, while acknowledging that a potential rematch with Turner in 2022 is possible.