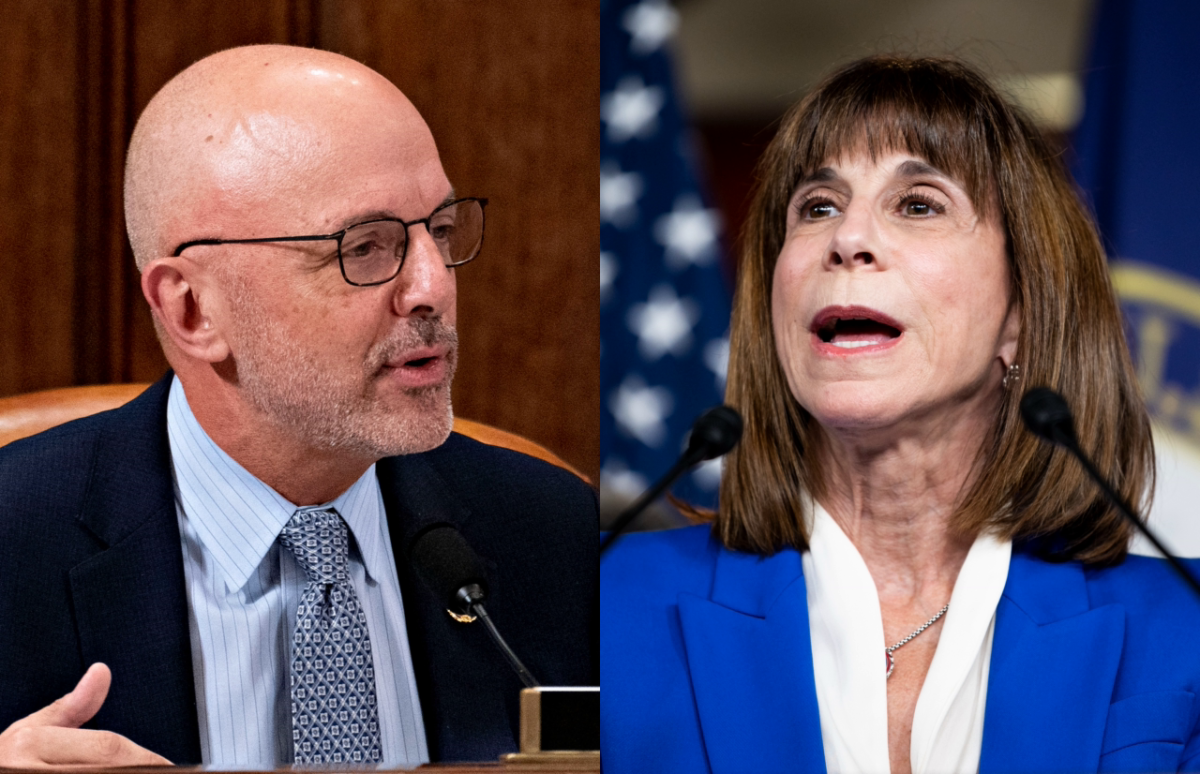 The House of Representatives will vote Thursday on legislation that will authorize the transfer of $1 billion to Israel to resupply its Iron Dome missile defense system, after a group of far-left Democrats pressured House leadership on Tuesday to remove the funding from a continuing resolution.

House leadership released the text of the continuing resolution — a stopgap funding bill designed to raise the debt ceiling and avert a looming government shutdown — on Tuesday morning. Included in the initial resolution was $1 billion in supplemental funding for Israel’s Iron Dome system, fulfilling a request made by the Israeli government in June. The system was used extensively in May, when Hamas fired rockets from Gaza toward Israel, the vast majority of which were intercepted by the system.

The opposition to the Iron Dome provision from a small group of House Democrats — reportedly including Reps. Pramila Jayapal (D-WA), Alexandria Ocasio-Cortez (D-NY), Ilhan Omar (D-MN), Ayanna Pressley (D-MA), Jamaal Bowman (D-NY), Cori Bush (D-MO) and Betty McCollum (D-MN)  — who are critical of Israel was enough to endanger the continuing resolution as a whole; Republicans unanimously opposed each form of the bill.

Pro-Israel Democrats had pushed for the funding but were not informed that it would be included in Tuesday’s continuing resolution.

“A number of us had been looking for the best places to secure funding to replenish Iron Dome. And the funding wound up going into the [continuing resolution],” Rep. Ted Deutch (D-FL) said. “A lot of us weren’t aware of that until it made news, one, that it went in, and, two, that some unnamed members in our caucus objected to it and that ultimately the language was taken out.”

“This problem was created by a very small, very vocal group who insisted on getting their way or they were going to shut down the government,” Rep. Kathy Manning (D-NC) told JI.

Manning said she was going into a meeting when she heard that the Iron Dome funding had been pulled from the continuing resolution, and told JI she was “extremely disappointed and decided that we had to take action.”

The group met to discuss how best to address the issue, Manning said, ultimately deciding “we had to go to the leadership and tell them we needed a vote on Iron Dome brought to the House floor this week.”

Deutch told JI that the group asked leadership for a commitment that the Iron Dome funding would move forward in the coming week.

Prior to the continuing resolution vote Tuesday evening, Hoyer announced that Iron Dome funding would be fast-tracked to the House floor as an independent measure later this week. Deutch said he expects the legislation to come up for a vote on Thursday. The bill, which will require the support of two-thirds of the House for passage, was officially introduced early Wednesday evening.

Manning said “a variety of other members” approached the group on Tuesday outside the House chamber, asking whether they had secured a commitment from House leadership. “When we said yes, they said, ‘That’s great to hear,’” she added.

During deliberations on Tuesday, House leadership discussed adding the Iron Dome supplement to the National Defense Authorization Act for 2022, the mammoth defense spending bill expected to pass the House later this week or defense appropriations legislation that will be passed later this year. 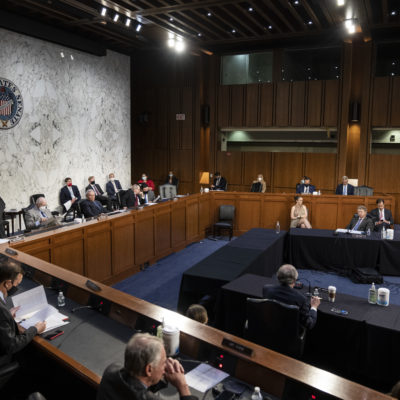 “We got assurances from… DeLauro that she would put it in the defense appropriations [bill], but we just felt that this was, first of all, a critical issue for Israel’s security. Second of all, what happened yesterday sent the wrong signal,” Manning said. “We wanted it very clear that the Democrats in Congress stand with Israel.”

In a statement issued Wednesday night, alongside the release of the new legislation, DeLauro noted that the funding would normally be part of the defense appropriations bill.

“Replenishing interceptors used to protect Israel from attacks is our legal and moral responsibility,” DeLauro said. “While this funding would ordinarily be included in a year-end spending package, we are advancing this legislation now to demonstrate Congress’ bipartisan commitment to Israel’s security as part of a Middle East with lasting peace.”

Deutch told JI on Wednesday that he was “disappointed when the decision was made to take [Iron Dome funding] out,” but added, “I think we’ll be able to look at this as a really unfortunate hiccup.”

Tuesday’s proceedings prompted a renewed round of speculation about where the Democratic Party is headed on Israel, and whether the anti-Israel left flank is becoming more accepted within the party.

The upcoming vote will likely provide a clear barometer of how many hard-line Israel opponents are in the House. Some progressives have claimed that they opposed the Iron Dome funding in the continuing resolution because it was advanced too quickly and was not otherwise relevant to the resolution. Others have expressed categorial opposition to the Iron Dome resupply in protest of Israel’s policies toward the Palestinians.

“[There’s] a handful [of members critical of Israel],” Deutch said. “That’s what we’re going to see tomorrow and the rest of my colleagues will have the opportunity to show their support for how important this is.”

Manning agreed. “What we were able to do yesterday was because we do have so many Democrats in Congress who believe in the importance of the U.S.-Israel relationship.”

Manning told JI that the campaign was a “real team effort,” which Deutch emphasized included both Jewish and non-Jewish House members.

Tuesday’s showdown also raised concerns among Israeli officials, including MK Nir Barkat, who is in Washington this week to lobby lawmakers against reopening the U.S. consulate in Jerusalem. Barkat, a member of the Likud party, said he also discussed the Iron Dome issue.

“It was very unfortunate to hear yesterday, the extreme members of Congress tried to… hurt the Israeli-American relationship, the work we do together to combat global terrorism,” Barkat said. The former Jerusalem mayor blamed “extreme… aggressive and anti-Israel” members of Congress for both the debate over Iron Dome funding and the effort to reopen the consulate.

Barkat said that after discussions with legislators on Wednesday and Hoyer’s pledge, he felt reassured that the Iron Dome funding would go forward.

The incident prompted a call from Israeli Foreign Minister Yair Lapid to Hoyer. In a statement following the call, Lapid blamed former Israeli Prime Minister Benjamin Netanyahu’s government for having “neglected the Congress and the Democratic Party, and caused considerable damage to Israel-US relations.”

“We are today rebuilding a relationship of trust with the Congress,” Lapid continued.

Sen. Chris Murphy (D-CT) said on Wednesday that he wanted funding for Iron Dome advanced alongside additional funding for Palestinian aid, setting up further battles once the measure reaches the upper chamber.

Murphy told JI he saw “a bunch of different pathways” forward, including the potential appropriation of additional reconstruction funds for Gaza and the release of Palestinian aid which, until recently, had been held back by Sen. Jim Risch (R-ID) — a move Murphy called “indefensible.” Risch had been attempting to prevent funds from ending up in the hands of terrorists, a spokesperson has said. The Idaho senator has since lifted the hold, a spokesperson announced late Wednesday.

“I’m 100% for Iron Dome, I can get my head around the $1 billion number,” Murphy said. “But I think it’s important for us to use this as a moment to make clear that we are still in the business of setting a table for peace. And that involves U.S. support for Israel, and it also involves some support for Palestinians.”

Deutch, who emphasized that he has “steadily been supportive of providing much-needed humanitarian assistance to the Palestinians,” said he did not understand why the two issues would be linked together.

“Either it’s important to save civilian lives [with Iron Dome], or it isn’t. Likewise, it’s important to support humanitarian programs that help Palestinians,” Deutch said. “I think both of them stand on their own. I don’t understand why we wouldn’t do everything we can to advance our values, which I know is important to Sen. Murphy.”