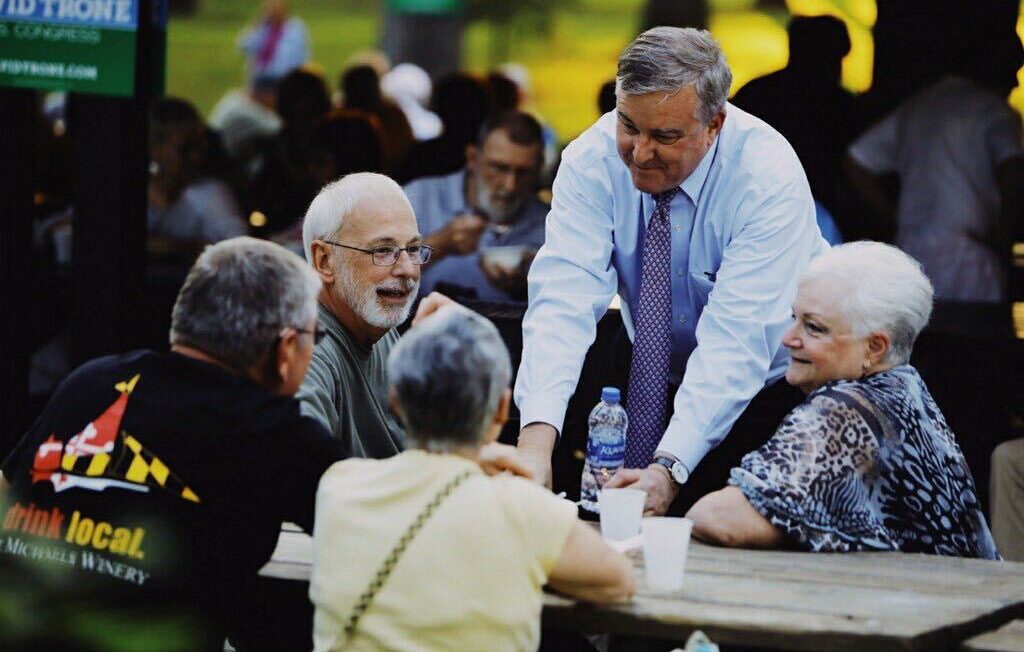 Rep. David Trone (D-MD), the co-founder of Total Wine & More, has a long and noteworthy record when it comes to philanthropy.

He is believed to be one of the only sitting members of Congress who is an AIPAC “minyan” donor, which requires a minimum annual gift of $100,000 and is the highest membership level in the pro-Israel group. Trone has also donated millions to the American Civil Liberties Union, establishing the Trone Center for Justice and Equality.

But in recent years, Trone, who represents Maryland’s 6th congressional district, has had to choose between the two groups because of his vehement opposition to the Boycott, Divestment and Sanctions movement. While AIPAC supports legislation that bars companies from participating in boycotts targeting Israel, the ACLU opposes such efforts on free speech grounds.

Trone, who voted last year in favor of a House resolution condemning BDS, disagrees with the ACLU. “We’re categorically opposed to BDS,” said the 64-year-old freshman congressman, who is a staunch supporter of the Jewish state and regards the movement as antisemitic. “A company shouldn’t be coerced into boycotting Israel.”

For Trone, such statements are hardly theoretical. Total Wine, which operates more than 200 stores across 24 states, is the largest retailer of Israeli wine in the U.S., according to the congressman, and its website makes clear that it opposes BDS as much as Trone does personally. “From Judea, Stop the BDS Movement,” reads a description below some wines that are produced in the West Bank.

The company has “worked hard to have one of the best selections in the country of Israeli wines,” Trone said, praising the wineries in the Golan, a region he characterized as an up-and-coming wine destination akin to Austria’s Wachau Valley. “And not just kosher, but Israeli wines themselves, some of which are kosher.” Despite his enthusiasm for Israeli wine, Trone was reluctant to name a favorite. “That’s just fraught with problems,” the freshman congressman said diplomatically after a brief pause.

Trone has long supported Jewish causes — at least since he married his wife, June Trone, who is Jewish and insisted their four children be raised in the religion. The family attends two synagogues in Maryland: Temple Beth Ami, which is Reform, and B’nai Israel Congregation, a Conservative synagogue June attends regularly.

“I told him, I want to raise my family Jewish, so if that was something that he wasn’t interested in, we shouldn’t pursue this,” June recalled to JI in a rare interview, adding that there was never any discussion about her husband converting. “He said that was fine with him, and of course he’s been extremely supportive of my being Jewish, and the kids.”

Ralph Grunewald, the executive director of the Jewish Federation of Howard County, who worked as Trone’s liaison to the Jewish community during his last campaign, described the congressman, who was raised Lutheran, as an “honorary Jew.”

“I’ve told him that many times,” said Grunewald, who took Trone on his second trip to Israel in February 2018 and solicited the congressman’s donation to AIPAC. “He just gets it in his kishkes.”

Trone said he was intimately attuned to the recent uptick in antisemitic violence in the United States. He lived in Pittsburgh for 15 years, and his oldest daughter, Michelle, received her Hebrew name at the Tree of Life Congregation, the site of a 2018 shooting that killed 11 people.

“We need to be there to support Israel, and that’s something that we are happy to do both in our personal capacity and in our official capacity,” said Trone, who serves as vice chair of the Middle East, North Africa and International Terrorism subcommittee.

Andrew Friedson, a Montgomery County councilmember who sits on Trone’s Jewish community advisory group, backed up that assertion. “David has been a very strong advocate for the U.S.-Israel relationship,” he said.

Robert Stillman, a Maryland doctor who sits on the local board of the American Jewish Committee, agreed. “He’s co-sponsored every piece of legislation in Congress since he’s been there, that I’m aware of, regarding the safety and security of the U.S.-Israel relationship,” Stillman said. “He hasn’t just been a vote,” Stillman added. “He’s been a collector of votes, an influencer.”

Trone is safely ensconced in Washington after handily winning his primary on June 2 — and he is in good shape to defend his seat come November. But his path to Congress was by no means seamless.

A failed run for Congress four years ago cost him more than $13 million of his own money, according to Federal Election Commission filings. Last cycle, he poured approximately $18 million more into his successful campaign to represent Maryland’s 6th district, which includes the state’s northwestern portion. Trone is enlivened by his congressional service, he said, despite a tumultuous first term that has included a global pandemic as well as mass protests against police brutality.

“I created a great, wonderful company, but I found I couldn’t move the needle enough to help those that don’t have a voice,” said Trone.

During his time in Congress, Trone has been focused on addressing mental health issues as well as opioid addiction. In May, the congressman — whose nephew died of a fentanyl overdose four years ago — was appointed by House Speaker Nancy Pelosi (D-CA) to a commission that will address the opioid crisis in the U.S.

“It’s really an opportunity to create legislation that’s going to save tens and tens of thousands of lives in addiction,” he said, “so I’m excited about that.”

Trone — who is aware that he is fortunate to have self-funded both of his campaigns — also wants to help out other aspiring candidates during a year in which the Democrats are hoping to flip the Senate while maintaining their hold on the House.

Not that political donations are anything new for the wine mogul. But Trone said there was an added urgency to his mission as the coronavirus crisis has upended traditional campaigning.

“It’s very hard for them, in today’s environment, to hold fundraisers and really get the money that it takes to run a campaign,” he told JI. “So if we’re able to step up because we’ve been fortunate financially, and help them out, that’s certainly, I think, the right thing to do.”

Trone is dispersing his money among more than 40 candidates, according to his wife, who is also making donations. Those candidates include Senate hopefuls Theresa Greenfield in Iowa, Sara Gideon in Maine, Mark Kelly in Arizona and John Hickenlooper in Colorado — all of whom are running in battleground states.

“They’re the ones who will have the tougher elections,” she told JI.

In late April, Trone gave his most sizable personal donation in 2020 — nearly $250,000 — to the Democratic Congressional Campaign Committee.

“He wants to now give back,” said Grunewald, comparing the congressman to other wealthy politicians of generations past such as former Sens. Frank Lautenberg (D-NJ) and Howard Metzenbaum (D-OH), who moved into public service later in life.

It is clear that Trone is hoping for a long tenure in politics as he tackles the issues that mean the most to him, while working to assist Democratic congressional and senatorial candidates in their effort to make it to Washington — which he knows, from personal experience, can be a difficult task.

“It’s crucial to be there to help,” he said.

This story has been updated for clarity.