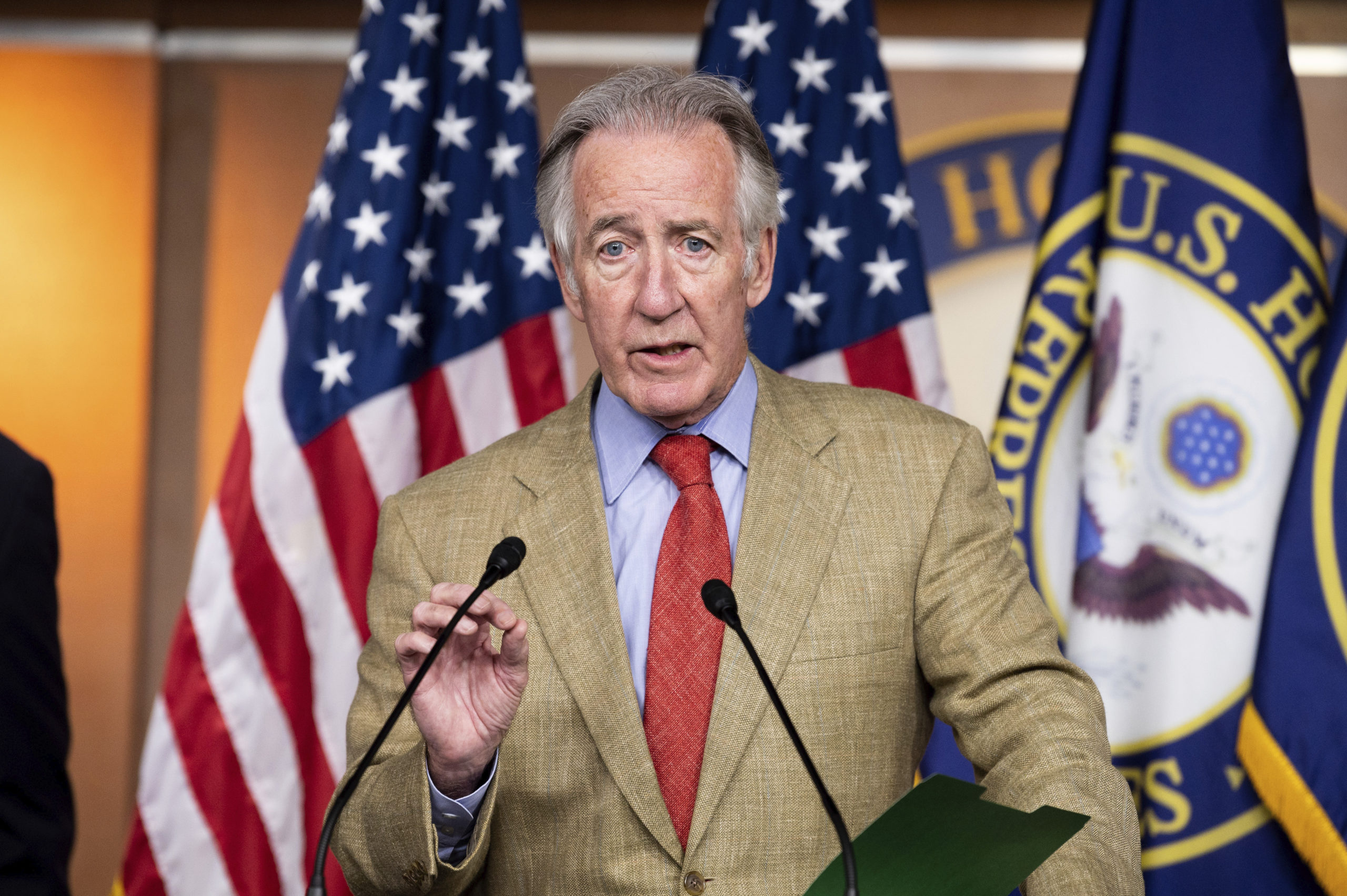 Can Richard Neal avoid the same fate as Eliot Engel?

If that sounds familiar, it may be because DMFI, a pro-Israel group, recently reared its head in another race, spending nearly $2 million on attack ads targeting Jamaal Bowman, a former middle school principal who defeated Rep. Eliot Engel (D-NY) in New York’s June 23 primary by 15 percentage points.

Mark Mellman, DMFI’s president and CEO, isn’t cowed by Engel’s loss, and defended his organization’s effort to boost Neal in an email statement. “Chairman Neal has consistently supported a strong U.S.-Israel relationship. Mayor Morse does not,” Mellman told Jewish Insider. According to Mellman, Morse — who supports conditioning aid to Israel — “fails to meet the standard set by over 95% of House Democrats.” Mellman added that Morse had “enthusiastically accepted support from IfNotNow,” a group that Mellman characterized as “an organization that refuses to recognize Israel’s right to exist, in any borders.”

IfNotNow, for its part, did not hesitate to taunt DMFI’s failure in New York. “They spent $2 million trying to defeat Jamaal Bowman,” said Yonah Lieberman, a co-founder of IfNotNow. “This is another last-ditch effort that will fail again.”

Morse himself, who is Jewish, appeared unbothered by the ad spend at a moment when pro-Israel donors are struggling to adapt to a new campaign finance and advertising landscape.

“As a congressman, I will use my voice to amplify the grassroots activism of Palestinians and Jewish Israelis to achieve a just future for both peoples, as well as make sure that U.S. support for Israel is used to address security concerns, not perpetuate human rights violations,” Morse told JI through a spokesperson on Wednesday.

The 31-year-old upstart congressional candidate, who has served as the mayor of Holyoke since 2012, has reason to think that he can dethrone Neal, the powerful chair of the House Ways and Means Committee.

This cycle, a number of upstart challengers — including Bowman in the Bronx, Cori Bush in St. Louis and Marie Newman in the Chicago suburbs — have succeeded in toppling long-serving Democratic incumbents. Each candidate was backed by Justice Democrats, the progressive political action committee that previously described Israel as a “human rights violator.”

Morse, who was endorsed by Justice Democrats when he launched his campaign last summer, is hoping he can join his compatriots in the House.

“I certainly admire the members of ‘The Squad,’” Morse told JI in an early August interview, referring to the quartet of left-leaning congresswomen including Reps. Alexandria Ocasio-Cortez (D-NY), Ilhan Omar (D-MN), Rashida Tlaib (D-MI) and Ayanna Pressley (D-MA). He added that he “would be proud to be among their progressive voices in Washington.”

Though there is scant publicly available data on the race, an internal poll from Morse’s campaign, released this week, put Morse just 5 points behind his opponent, with 41% of the vote and 13% of voters still undecided. “We’re confident we have a pathway to victory,” Morse declared.

Still, Morse’s campaign, which has pulled in approximately $841,000, was nearly upended about two weeks ago, when the College Democrats of Massachusetts alleged in a letter that Morse, who is gay, and worked as an adjunct professor at the University of Massachusetts Amherst, had taken advantage of “his position of power for romantic or sexual gain.”

Since then, reporting from The Intercept has challenged that narrative, suggesting that the College Democrats were in cahoots with the state Democratic Party to sabotage Morse’s campaign. Neal has denied that he knew anything about such plans.

Rather than tanking his prospects, the scandal only appears to have increased Morse’s profile.

“It drew more attention to Morse, not just within the district but from people outside,” said Robert Boatright, a professor in the department of political science at Clark University in Worcester. “Before the scandal, I think he would have probably come up a little bit short,” Boatright told JI. “Now, it’s pretty hard to predict.”

Morse, who supports Medicare for All and the Green New Deal, cites his nearly decade-long tenure serving Holyoke as evidence that he is prepared to represent the 1st district, a vast swath that includes western and central Massachusetts.

“I would arrive with nine years of governing executive experience on so many issues that people think are reserved for the federal government or national issues,” he said, alluding, among other things, to his support for recreational cannabis use as well as his efforts weaning Holyoke off of fossil fuels.

When it comes to foreign policy, Morse holds views that have become de rigueur among members of his far-left cohort — particularly as they relate to Israel. He supports, for instance, conditioning aid to the Jewish state.

“As an American, I believe our foreign policy must be grounded in our values, and U.S. support for Israel must be used to address security concerns,” he said, adding, “We should be very clear about not allowing our tax dollars to be used to subsidize the expansion of settlements, the destruction of Palestinian homes or the detention of Palestinian children.”

Morse has visited Israel once, on a Birthright trip in 2008 during his freshman year at Brown University. His brief visit to the Jewish state, he said, was a meaningful one.

“The Holocaust museum, in particular, was a really powerful experience,” he said of his visit to Yad Vashem. “It made me feel more connected to fellow Jews in a way that I hadn’t been connected before, just given our people’s common struggle for freedom and humanity and what happened in history and just knowing and realizing the evil that humans can perpetuate against others. I think that’s a lesson that we have to live with every day.”

While he doesn’t back the Boycott, Divestment and Sanctions (BDS) movement, Morse told JI that he would not take action, if he is elected to Congress, to legislate against the views of those who do. “Despite my personal position,” he said, “I would continue to oppose legislation that would criminalize or prevent other folks from exercising their free speech and First Amendment rights in regards to BDS.”

Neal positions himself as a firm supporter of the Jewish state. “Israel is a representative democracy,” he told JI in a recent interview. “They embrace the tenets of a constitutional democracy, free speech, freedom of the press and the right to assemble. And I’ve seen the debate in the Knesset. It’s pretty stormy.”

Candy Glazer, a longtime Democratic activist in Massachusetts and an AIPAC national council member, said Neal has been a reliable ally of the Jewish community in western Massachusetts.

“We can always depend on Richie Neal,” she told JI, noting that the congressman has been a strong advocate against the BDS movement. “He has just been a very loyal supporter on almost every issue.”

Glazer added that Neal’s deep involvement in the peace process in Northern Ireland has given him unique insight into Israel’s plight. “I think he has empathy about how important homeland is,” Glazer mused. “It’s not just a political thing.”

Morse and Neal are in alignment on some issues when it comes to the Middle East. Both candidates support a two-state solution to the Israeli-Palestinian conflict and believe that the United States should reenter the 2015 Iran nuclear deal.

President Donald Trump’s move to pull out of the Iran deal, Morse said in a candidate questionnaire solicited by JI, “was a baseless and unprovoked decision that put the U.S. in a compromising position. The U.S. should rejoin JCPOA in exchange for Iran returning to full compliance with the accord, and should seek to build on the deal with further negotiations.”

Neal, too, is critical of Trump’s approach in the region. “Trump vacillates on these issues, and I think that a steady hand would be very important to getting to the establishment of delicate negotiations,” he said. “I hope that a President Biden will have a chance to serve as an honest broker as it relates to those issues after November.”

Even though they hold some views in common, Morse still regards Neal as a kind of antediluvian presence on the Hill.

“Congressman Neal has had more than 30 years to make a difference here, and I thank him for his service,” Morse said, while alleging that his opponent has become beholden to corporate interests. “It’s time that we actually have a member of Congress that is more interested in changing outcomes and improving lives than moving up the ladder of seniority and getting access to power.”

Neal, who has raised nearly $3.4 million in his reelection effort, swats away such critiques. “I enjoy very much being amongst the people in the 1st congressional district,” said the 16-term congressman, who served as the mayor of Springfield, the largest city in his district, before he was elected to the House. “I’ve had a long track record, I’ve won a lot of elections, and I think that I’ve delivered for my constituents, but also I’ve been a player on the national stage.”

He is confident that he will not share the same fate as Engel, with whom he entered Congress in 1989.

“The narrative that has been created has not been met by the evidence,” he averred. “There are individual circumstances in each congressional district that tend to dictate the outcome. So I think trying to nationalize an answer on that is inaccurate.”

Howard J. Gold, a professor of government at Smith College in Northampton, agrees that Neal represents a district that is different in its makeup than some of the urban areas in which progressive candidates have recently unseated Democratic incumbents. The 1st congressional district, he said, is a “mixed bag” of depressed cities, poor rural areas and some progressive communities, which Morse is relying on to give him an edge in the primary.

“Richie Neal is very well established in some of these areas of the state,” Gold told JI. “He’s got a really strong constituency service.”

Nicole LaChapelle, the mayor of Easthampton, represents one of the more progressive cities in the district. “There are more Morse signs here than Neal signs,” she observed. Still, she believes that Neal has been a reliable congressman, and worries that if Morse is elected he will have considerably less sway in D.C. than the current congressman.

“I not only need to have communication with my representative in Congress, I need to know they can deliver,” LaChapelle said. “There’s no denying the fact that the U.S. Congress works on seniority, so to say that seniority doesn’t matter anymore or whatnot — fact-check— it does.”