The freshman congresswoman from Illinois offered an Israel critic a job as her foreign policy advisor to avoid a primary fight, probe alleges 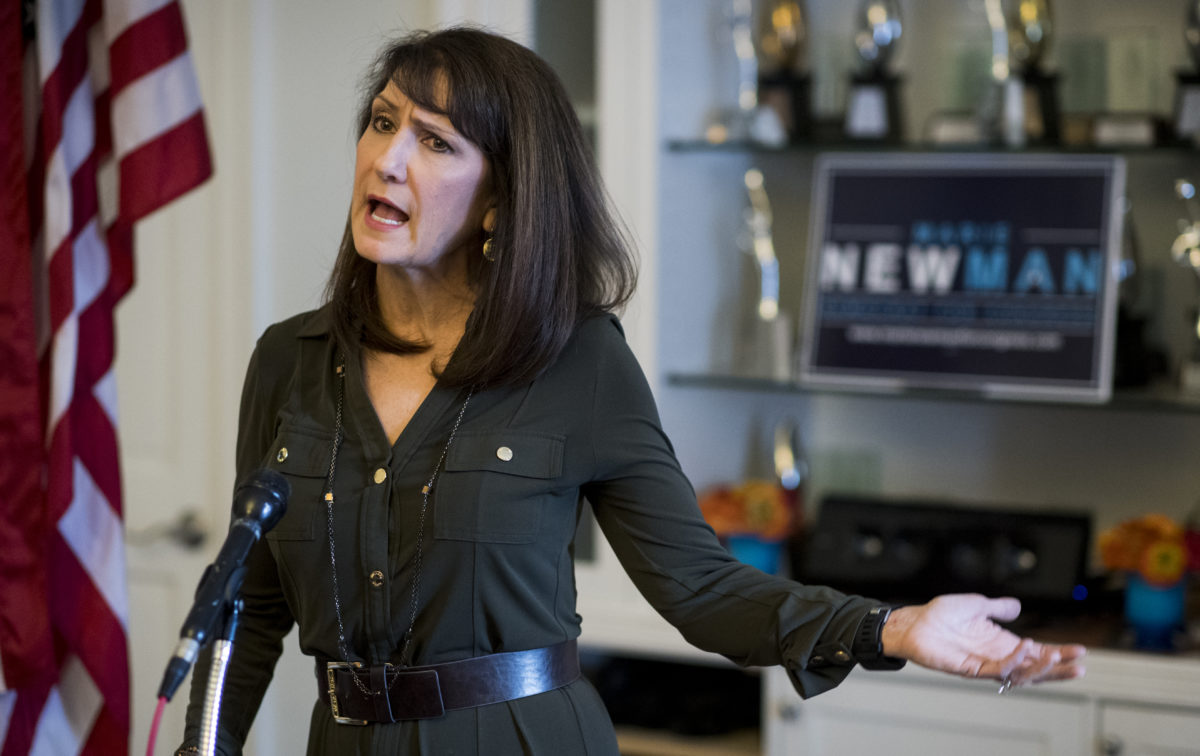 Marie Newman, candidate for Congress in IL-03, speaks during event to receive the endorsement of Reps. Jan Schakowsky, D-Ill., and Rep. Luis Gutierrez, D-Ill., in Washington on Wednesday, Jan. 17, 2018.

A congressional ethics probe uncovered “substantial reason to believe” that Rep. Marie Newman (D-IL) attempted to induce a potential 2020 Democratic primary opponent not to run against her by offering him a position as her foreign policy advisor, with a particular focus on Israeli-Palestinian issues.

Before being elected to Congress in 2020, Newman allegedly pledged to hire Palestinian-American professor Iymen Chehade as her foreign policy advisor if she were elected in exchange for his agreement not to run against her, according to a report from the Office of Congressional Ethics (OCE) released Monday.

The OCE is a nonpartisan, independent government entity that reviews misconduct allegations and refers some to the House Committee on Ethics, made up of members of Congress.

Newman first ran against former Rep. Dan Lipinski (D-IL) in the 2018 primary, but lost, before unseating him in 2020.

She said in a deposition to the OCE that she believed her 2018 defeat came in part because “I did not understand the Palestine-Israel issue very well.” As she explored a second campaign, she said she sought to provide the Arab and Muslim American community in her district with “a very clear commitment” that she would advocate for their positions on the issue, in part by working with Chehade.

The freshman representative said Chehade volunteered to write a policy paper on the Israeli-Palestinian conflict for her in the summer of 2018, as she was considering a second run for Congress. Following initial discussions with him about the policy paper, Newman offered Chehade a position in her future congressional office.

Chehade is a vocal supporter of the Boycott, Divestment and Sanctions movement targeting Israel and spoke at a 2014 National Students for Justice in Palestine conference. He is now mounting a congressional run in a newly drawn Illinois district.

In a draft contract emailed to Newman in October 2018, Chehade outlined a proposed agreement, writing, “Chehade agrees not to announce or submit his candidacy for election to Congressional Representative of the 3rd District of Illinois. In exchange, Newman will hire Chehade as her Chief Foreign Policy Advisor.”

Newman signed an employment contract with Chehade — which did not include the language about his potential candidacy — in December 2018. That contract guaranteed an initial salary of at least $135,000. The two later had a falling out and she did not ultimately employ him. Chehade filed a breach of contract lawsuit over the issue, which Newman settled last summer. Both parties signed non-disclosure agreements.

According to the OCE report, Newman may have violated both federal law and House rules.

“The OCE found that Mr. Chehade’s policy expertise was not the only reason she contracted to employ him in the future,” the report read. “Instead, Rep. Newman likely was motivated to enter the agreement to avoid competing against Mr. Chehade in the [2020] Democratic primary.”

Newman claimed in her deposition that she was unaware Chehade had been considering running for Congress and that she was “outraged” by the language in the proposed contract regarding his candidacy. In one email, Newman wrote, “most of [the proposal] looks good. Couple of concerns — mostly phraseology.”

In part citing these emails, the OCE report reads, “The evidence gathered during the OCE’s review strongly contradicts Rep. Newman’s testimony that she did not have any knowledge of Mr. Chehade’s intent to run for congressional office.”

“Recently, a right-wing organization filed a politically motivated complaint with the Office of Congressional Ethics (OCE) regarding a dismissed lawsuit. The materials produced during the OCE’s review overwhelmingly demonstrate that the ethics complaint is completely meritless,” a Newman spokesperson said in a statement to JI on the report.

Foundation for Accountability and Civic Trust, a conservative nonprofit, originally submitted the ethics complaint. Any member of the public can submit allegations to the committee. The OCE’s board, made up of private citizens, determines if any investigation should be opened..

In a November 2021 letter to the Ethics Committee, Newman’s lawyer claimed that she provided “hundreds of pages of contemporaneous documents undercutting the charges” — including a text message where Chehade allegedly said he “never asked you for anything” — and that the OCE “consistently omitted” facts favoring Newman.

Newman’s attorney also claimed that the OCE and Ethics Committee have no authority to investigate the incident, which involved events before Newman officially entered the 2020 race. The attorney also noted that Chehade never declared his candidacy or lived in the district. (House candidates are not required to live in the district in which they are seeking office.)

Chehade refused to testify for the OCE, citing his nondisclosure agreement with Newman. The OCE report recommends that the Ethics Committee subpoena him. His campaign did not respond to a request for comment.

The OCE referred the probe to the Ethics Committee in October. In conjunction with the OCE’s announcement, the House Ethics Committee’s leaders said they would continue to investigate the alleged conduct, noting in a statement that the Committee’s review “does not itself indicate any violation has occurred or reflect any judgment on behalf of the Committee.”

During Newman’s first term, she has established herself as one of the House’s most consistent Israel critics. In September, she was one of nine House members who voted against supplemental funding for Israel’s Iron Dome missile-defense system.

Newman said in her deposition that she did not ultimately publish the policy paper Chehade had authored because it was “not acceptable.” She added that she ultimately broke with Chehade in part because of policy differences: she would not support a one-state solution to the Israeli-Palestinian conflict or the BDS movement.

In his proposed agreement with Newman, Chehade asked that she agree to oppose any “ADDITIONAL military sale or aid to Israel,” anti-BDS legislation and Israeli military offensives in the Middle East, among other positions critical of Israel. He also asked for “complete discretion” over her itinerary on potential trips to the Middle East and a commitment that she would work with Jewish Voice for Peace and other U.S. groups critical of Israel.

That language about specific policies does not appear in the final employment contract signed by the parties.

The OCE report and continuing Ethics Committee investigation could be fodder for Rep. Sean Casten (D-IL) who is currently running against Newman in a primary in Illinois’ new 6th Congressional District.

A Casten campaign spokesperson declined to comment on the issue.

Israel policy has emerged as a prominent dividing line between Casten and Newman — whose voting records are otherwise very similar — in that race. Newman’s vote on Iron Dome in particular has worried some Jewish constituents in the Chicago-area district, who see the more centrist Casten as reliably pro-Israel.