A new report from IMPACT-se finds additional objectionable material even after the U.N. agency said it had eliminated problematic content 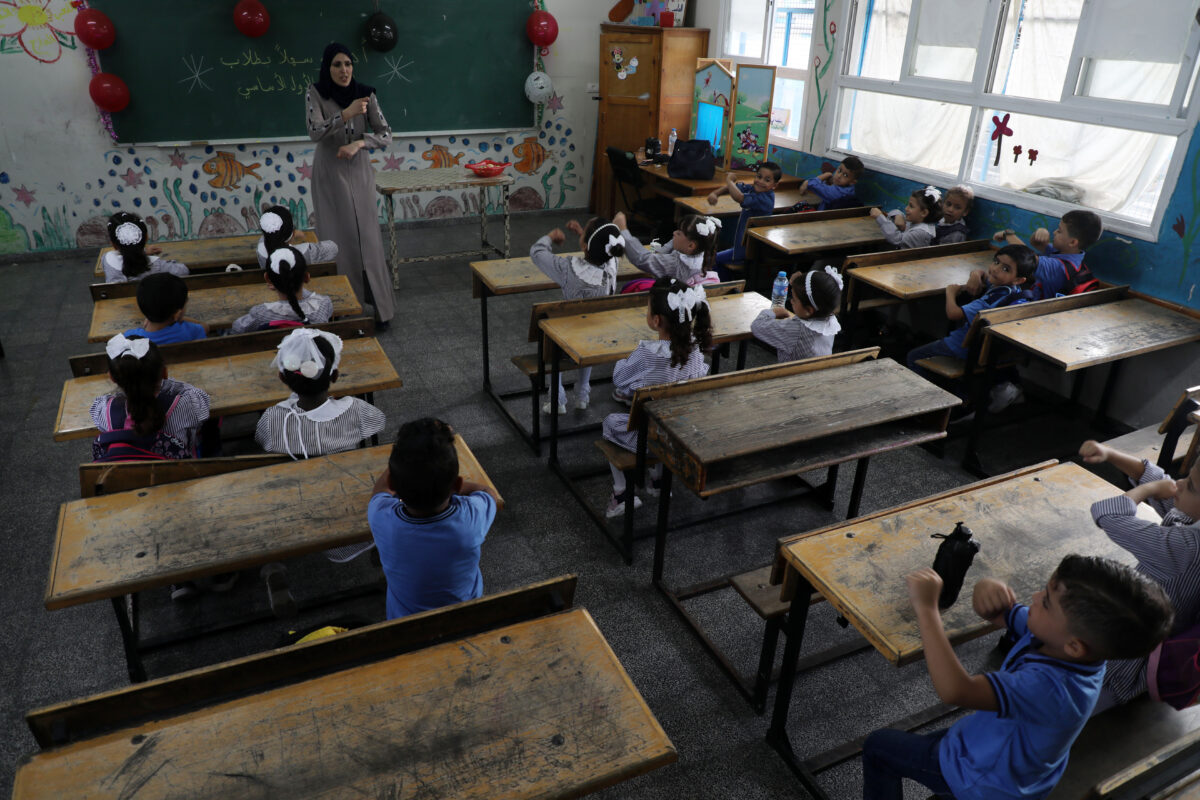 A teacher interacts with students in a classroom at a United Nations-run school in Gaza City, Saturday, Aug. 8, 2020.

The report by the Institute for Monitoring Peace and Cultural Tolerance in School Education (IMPACT-se), a London- and Ramat Gan, Israel-based group that monitors the content of educational materials distributed by the U.N. Relief and Works Agency for Palestinian Refugees in the Near East (UNRWA), discovered the content after UNRWA had said that all such material had been removed from self-produced materials, according to an IMPACT-se statement.

The new materials, labeled as having been produced by UNRWA staff in Gaza for use in the 2021-2022 school year, include self-study booklets as well as social studies exams. The “material contains texts that glorify waging war and sacrificing one’s life and blood to liberate the ‘motherland,’” according to the report.

The material also includes repeated descriptions of Jews as “inherently treacherous and hostile to Islam and Muslims” and “impure,” and accuses them of attempting to murder the Prophet Mohammad and “defiling” the Al-Aqsa Mosque.

The materials also ignore the existence of Israel, labeling cities and sites within Israel as Palestinian; refer to Israel as “the Zionist Enemy,” “the Zionist Occupation” and “the Zionist Entity”; and describe Israel as a “colonial entity created by European colonialism to divide the Arab world.” They further accuse Israel of intentional mistreatment of Palestinian prisoners, and portray Israeli forces as “demonic.”

UNRWA has said it would share all of its self-produced educational materials on a public web platform, but these materials were not available online, according to the report. The agency has also previously said it had rectified issues with its internally produced materials and that they are subject to an extensive approval process.

“After a similar scandal last year, UNRWA promised that all offending material produced by them would be removed. It seems that UNRWA has interpreted this as removal from the website where it can be scrutinized, rather than removal from actual classrooms,” IMPACT-se CEO Marcus Sheff said. “UNRWA was again made aware of our concerns just two months ago.”

UNRWA and U.S. officials have previously blamed host governments, including the Palestinian Authority, for producing the objectionable content, and argued that they have no ability to alter the learning materials. But IMPACT-se reports have repeatedly found that materials produced by UNRWA staff have also contained antisemitic material and incitements to violence.

U.S. Ambassador to the U.N. Linda Thomas-Greenfield has said that the U.S. is working to eliminate antisemitic and anti-Israel material from UNRWA curricula, and has praised the agency for what she described as efforts to remove such material.

“[I] told them that this was really a red line for all of us,” Thomas-Greenfield told the House Foreign Affairs Committee in June. “They hear your voices on this. They hear our voices on this… We will be watching what they do on these textbooks. There are other issues of management that we’re working with them very closely on and have monitored their work.”