Bragg requested $1.7 million to expand his office’s hate crimes unit, as 2022 incidents have already more than doubled over last year 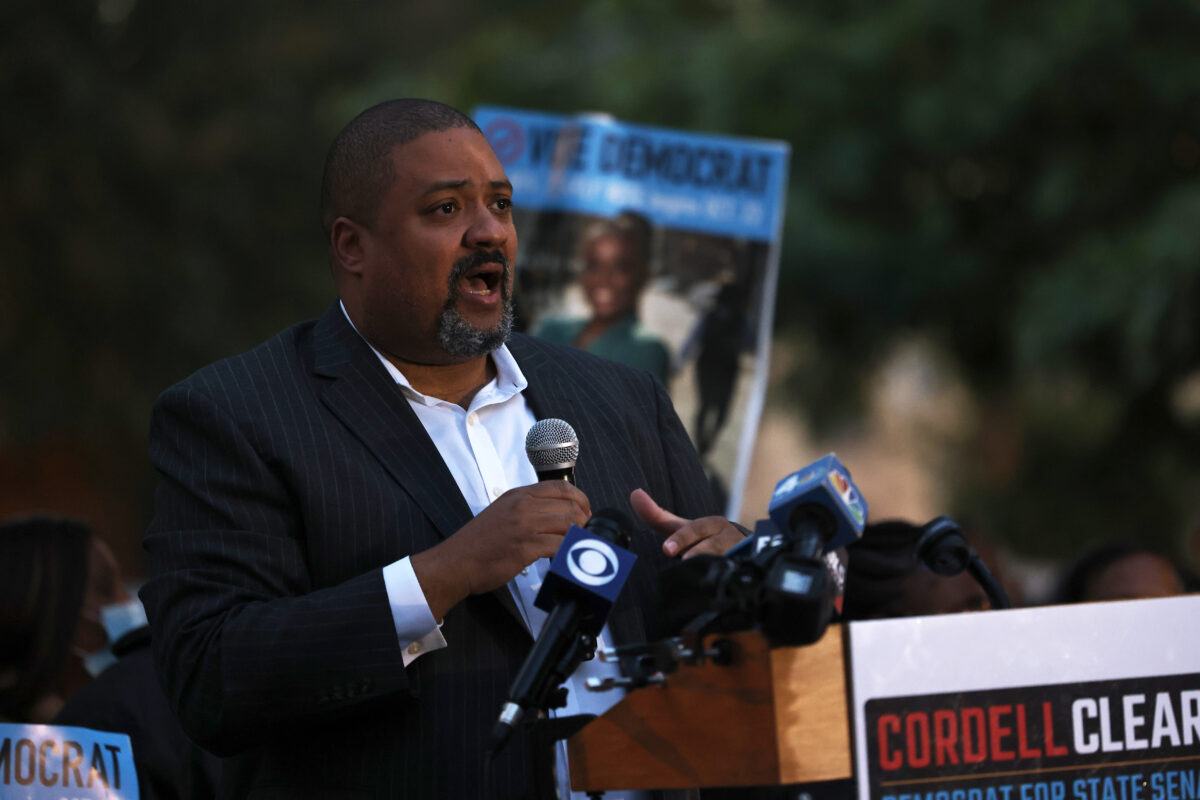 Alvin Bragg speaks during a Get Out the Vote rally at A. Philip Randolph Square in Harlem on Nov. 1, 2021.

Amid a sharp increase in hate crimes across New York City, Alvin Bragg, the district attorney of Manhattan, is devoting a significant measure of new money and manpower to combat such incidents, which rose by a staggering 160% last year in his borough alone.

Last week, the New York City Council officially approved Bragg’s request for $1.7 million in funding to expand his office’s hate crimes unit — resources he had described as sorely needed in recent testimony to the legislative body.

There is currently no funding in the city budget dedicated specifically to the Manhattan DA’s hate crimes unit. A separate hate crimes prevention office, created by the City Council in 2019, has received funding but, unlike the DA’s office, has no investigatory purview.

“We made the request because it’s a top priority,” Bragg said in an interview with Jewish Insider on Tuesday. “So we’re going to be prioritizing it.”

The new funding, which will go into effect on July 1, comes after a rocky start for Bragg, who assumed office in January. The political newcomer began his first term amid fierce backlash from critics on both sides of the aisle who, for varying reasons, took turns deriding his approach to criminal justice reform as unreasonably opaque in at least one case and excessively lenient in others.

Even as he has tempered some of his most staunchly progessive policies in recent months — including a controversial vow to seek prison sentences only for the most severe offenses — Bragg, a Democrat, has continued to face scrutiny as well as calls for his ouster from a chorus of hardcore detractors.

The embattled DA gained some much-needed bipartisan support when the City Council voted to pass its record-breaking $101 billion budget for the upcoming 2023 fiscal year more than a week ago. Along with funding to bolster the hate crimes unit, Bragg’s office also received more than $400,000 for its gun violence prevention team.

Bragg had promised to address rising hate crimes when he ran for office last year in a crowded primary to replace Cyrus Vance Jr., whose efforts he had criticized as underwhelming amid an uptick in attacks against Asian Americans, Jews and other minority groups.

In Manhattan, hate crimes rose by 160% in 2021, according to written testimony from the Manhattan DA’s office released in March and provided to the City Council’s Committee on Public Safety as part of the request for more funding. Across the city, such incidents have already more than doubled over last year’s numbers.

Bragg’s office is currently working through a docket of nearly 90 cases, most of which — between 35 and 40% — constitute anti-Asian hate crimes, according to information provided to JI by a spokesperson. Hate crimes committed against members of the LGBTQ community make up the second-largest number of cases. The majority of incidents involving the Jewish community, 12 in all, are property crimes, including antisemitic graffiti such as swastikas scrawled onto public establishments.

“The docket is at the most it’s ever had for the unit,” Bragg told JI.

Thanks to the new infusion of resources, Bragg is now on the lookout for two full-time deputy chiefs to work exclusively within the hate crimes unit, currently led by Hannah Yu, who has served in the Manhattan District Attorney’s Office since 2014.

In a recent interview, Yu said the work “strikes a personal chord” as the eldest daughter of Korean immigrants. “I grew up being the mouthpiece for my non-English-speaking parents,” she told JI. “I think that’s shaped the way I view the world and the way I view victimization and discrimination.”

“If you can’t be free to be who you are and be free in who you love, what God you worship and what community you associate with,” Yu added, “then we’ve got a big problem.”

The funding will also help bankroll a supporting group of investigative analysts, assistant district attorneys, community partnership coordinators and victim services advocates, among others, according to Bragg, who advocates for a holistic approach to the law. “We want to have a hate crimes unit that is staffed not just with lawyers, but also bringing in outreach folks who have language capabilities and cultural sensitivity and competency,” he said.

“The language capabilities are not what we want them to be in the office,” Bragg acknowledged. “I think that is, one, important for investigations, for interviewing witnesses and interviewing victims. It’s also important to get people to come forward and to get them to trust us.”

Bragg, who has described his own personal experiences with police brutality as a kid growing up in Harlem, emphasized that such tools can help foster ties with marginalized groups that have been hesitant to report hate crimes and other bias incidents to law enforcement officials. “People aren’t always necessarily going to come forward to the government,” he told JI. “But they’ll come forward to a civic group” or a “community partner.”

“There’s fear and concern about these issues, understandably, and I think engaging with people and letting them know we’re here has been quite helpful,” Bragg added, stressing that outreach has been ongoing in schools, synagogues and other places during his initial months in office. “In fact, we’ve been told that by groups, and absolutely we want to continue to do it. It’s a work in progress.”

Gideon Taylor, executive vice president of the Jewish Community Relations Council of New York, said he was encouraged by Bragg’s “commitment” to such advocacy.

“These additional resources for the unit will strengthen the office’s capability to address these awful crimes which undermine our society and weaken our city,” he told JI. “Combating hatred needs both strong law enforcement and also effective programs to bring people closer together. This is not just about attacks on Jews, it is about crimes against all ethnic communities.”

In 2021, the Anti-Defamation League “tracked more antisemitic incidents in Manhattan than anywhere else in New York State,” according to Scott Richman, regional director of the ADL’s New York and New Jersey chapter.

“The DA’s efforts, including, in particular, expanded community engagement and enhanced partnerships with community-based organizations will be critical to addressing the root causes of extremism and hate and providing much-needed support for communities in the wake of these crimes,” Richman said in a statement to JI.

Meanwhile, among the challenges Bragg hopes to address more exhaustively on the investigative side is the often complicated process of establishing a motive, which his office does not “have to prove in almost all other cases,” he told JI.

“With hate crimes, it is an element of the proof necessary to make up a charge,” Bragg explained. “We’re looking at things like social media and email, text messages, things that give us a window into the person’s mind, and not limiting ourselves to whether there’s an exclusive epithet said at the scene.”

Matt Nosanchuk, co-chair of the Jewish Coalition for Criminal Justice Reform and president of the New York Jewish Agenda, a progressive advocacy group, suggested that Bragg’s approach is overdue.

“There hasn’t been enough of a recognition that social media has been serving as a breeding ground or a swamp for hateful views,” he said, adding that the Manhattan DA’s office has “a critical role to play” in the fight against hate crimes.

According to Yu, the hate crimes unit chief, another big component of that fight includes finding alternatives to prosecution such as restorative justice, at least in instances where less punitive measures are deemed suitable for the defendant.

“Restorative justice is certainly part of our holistic approach to resolving our cases,” Yu told JI. The method “requires that both the victim and the defendant want to be across the table from each other,” she explained. “It’s not appropriate for all cases. We certainly don’t want to re-victimize our victims. But where appropriate, and where both parties are willing to do it, we are all on board.”

The unit also offers an array of other options, including substance abuse programs and mental health court. “We’re certainly working closely right now to expand our education training and programming,” Yu said. “We want to really have a robust bias program that we can refer defendants to.”

“Accountability matters, as does prevention that gets at the root causes — because we can’t simply prosecute our way out of this crisis,” said Amy Spitalnick, executive director of Integrity First for America, the nonprofit behind a recent lawsuit against a group of white supremacists who participated in the 2017 “Unite the Right” rally in Charlottesville, Va. “The expansion of the hate crimes unit marks an important step forward in this fight, going beyond the business-as-usual approach that’s so clearly failed us.”

While the funding has yet to be released, Bragg said he was “in the process” of searching for new candidates from across the office and in other divisions as he seeks to build a unit “that is going to be enduring and fitting these cases.”

“This beautiful island and city we have, we’ve got a lot of talent,” he told JI. “I’m hopeful that we’ll be set up in a matter of months.”