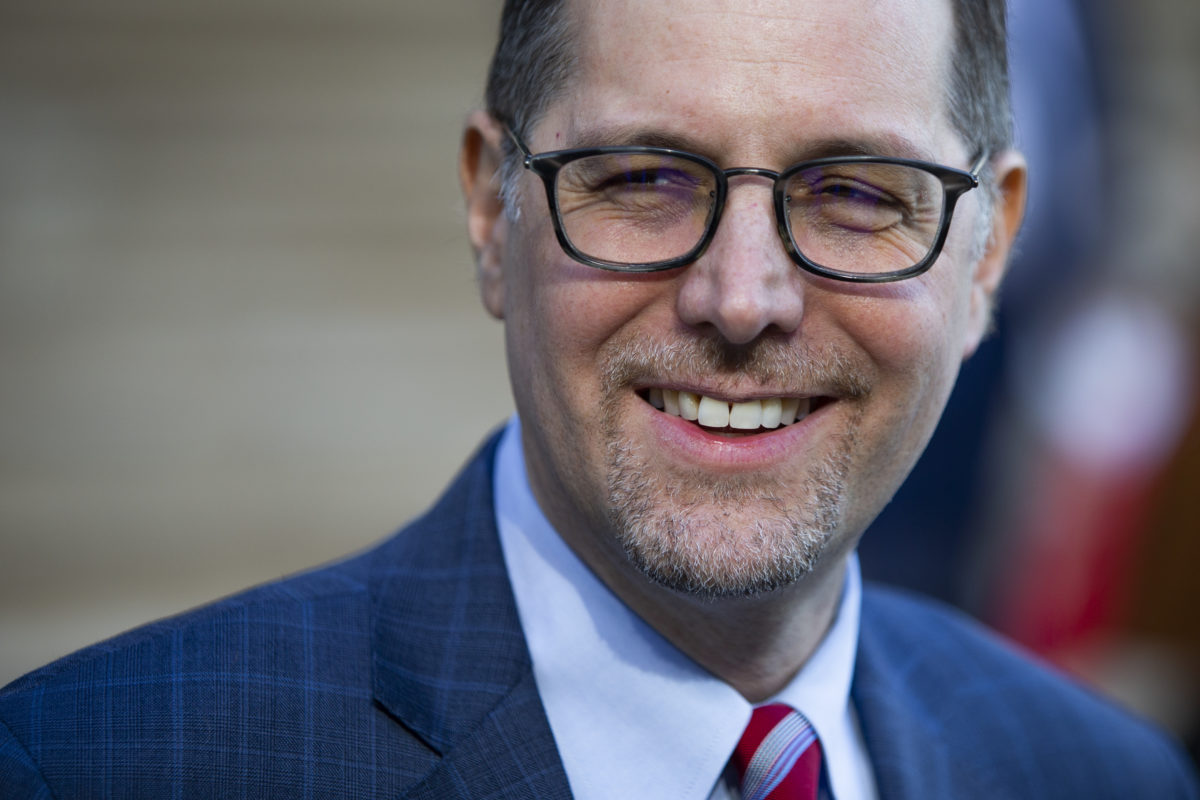 NYC Councilmember Mark Levine speaks to media as people take part in a rally at the steps of City Hall after New York City Council vote on legislation to ban flavored e-cigarettes on November 26, 2019 in New York City.

Mark Levine, a New York City councilmember running for Manhattan borough president, is calling for a dramatic budget increase for the Office for the Prevention of Hate Crimes as acts of violence against Jews and Asian-Americans have risen sharply in recent months.

The office currently operates with an annual budget of approximately $700,000 for a staff of seven, along with $3 million for an initiative that helps fund six organizations, including the Jewish Community Relations Council of New York, dedicated to the advancement of community-based solutions for preventing hate crimes.

“We want both of those doubled,” Levine, who introduced legislation creating the office in 2019, said in an interview with Jewish Insider on Tuesday. “This is a big mandate for an office that only has seven staff, and it’s why we want to increase the resources at this time of crisis in our battle against hate crimes.”

According to a recent report from the New York City Police Department, anti-Asian hate crimes surged by 335% this year, with 87 known incidents between January and May. Last month, amid mounting violence between Israel and Hamas, the NYPD documented 26 antisemitic hate crimes in New York, a significant increase over the previous year.

Expanding the hate crimes budget, Levine said, would allow the office to contract more efficiently with community groups while working with city agencies that can be mobilized to prevent hate crimes, such as the departments of education, health and mental hygiene and homeless services as well as the Mayor’s office of Criminal Justice and the City Commission on Human Rights.

“All of them need to be mobilized now,” Levine said. “This is a critical moment in this battle, and the work of this office is more important than ever.”

Levine argued that the office should also prioritize revamping the city’s public school curriculum as part of the effort to combat hate. “It needs to focus more on the history of the Jewish people and all marginalized people,” he maintained. “We need to do much better in teaching the history of the Holocaust and other forms of antisemitic oppression over the generations, and also teach the wonderful contributions and the richness of Jewish history.”

“Ignorance is fertile ground for hate,” said Levine, who is Jewish, “and so improving the curriculum in our schools to tell the story of the Jewish people and African-Americans and Asian-Americans and others is absolutely critical.”

Levine, a leading candidate for Manhattan borough president in the June 22 Democratic primary, would have no formal role in the hate crimes office if he is elected. But the outgoing city councilman said preventing hate crimes will be a “top priority.”

The borough president, whose duties include community board appointments, land use recommendations and coordinating with city agencies, “needs to be a part of this effort,” Levine told JI. “They’re on the ground working with impacted communities,” he said. “They have a huge bully pulpit.”

Levine said he is advocating for increased funding around hate crime prevention after having witnessed what he described as an “appalling rise in hate crimes in New York City as we are coming out of this pandemic.”

“Other categories of hate are on the rise, and we just can’t take this sitting down,” he said. “We have to act.”