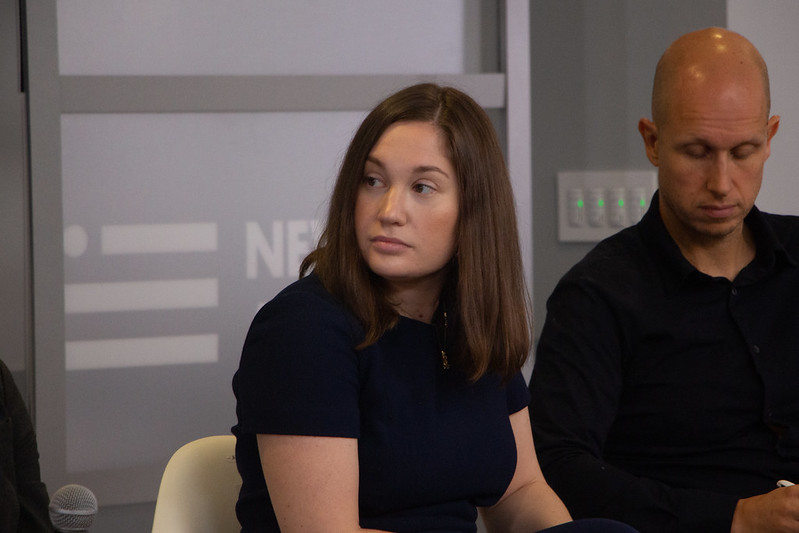 With the closely watched trial against neo-Nazi activists alleged to be behind the deadly 2017 “Unite the Right” rally in Charlottesville, Va., underway, Amy Spitalnick, executive director of Integrity First for America, the organization behind the lawsuit, joined Jewish Insider’s “Limited Liability Podcast” to discuss the ongoing litigation. Spitalnick, who spoke during a recess in the trial, offered her insights into the legal and security difficulties in confronting neo-Nazis in court.

Accountability: “The general lack of accountability in the aftermath of Unite the Right is really why we believe this case is so important. What became crystal clear in the days after the violence is that what happened was no accident, but rather it was planned meticulously in advance on social media, where leaked Discord chats that came out in mid-2017 illustrated how these defendants — the people who are now defendants in our lawsuit and their co-conspirators — talked about everything in advance, from what to wear, what to bring for lunch, to which weapons to carry, to whether they could hit protesters with cars and then claim self-defense. And it was very clear that again, [it] wasn’t an accident, wasn’t a simple clash between two sides, but rather was a meticulously planned, racially motivated conspiracy to attack people.”

Price to pay: “Suing Nazis isn’t cheap or easy in general. It’s harder when those neo-Nazis try every trick to avoid accountability, including dropping phones in toilets or otherwise. And it’s even harder when we have a global pandemic. And so all of those factors combined made it take about four years to get to this moment. We first filed this case [in] October of 2017. The trial started nearly four years to the day. In 2018, the court threw out the defendants’ motions to dismiss the case in a really, I think, well-written, important opinion… Since then, for the last three years, we’ve been in this discovery process.”

Security costs: “By far security is our top expense, and that’s because threats against our team, our plaintiffs and otherwise have been significant over the years. I can’t talk to some of the specifics right now while the trial is ongoing, but suffice it to say that we are not taking precautions out of an abundance of caution, we’re taking precautions because every expert in the security space has agreed with us that they are very necessary. And unfortunately, that’s been proven true over the last few weeks. I’m not sure how you prepare anyone for this; I wish I had probably better prepared my own family and my team and their families for this. It’s not something you ever really can expect until it’s part of your life.”

Financial win: “We’ve won five-figure financial penalties against some of the defendants who have had bench warrants out for their arrests, including one who’s already set in jail. And going into trial, we actually won a number of what’s called ‘evidentiary sanctions,’ which establishes some of the core allegations of our lawsuit as fact, in this case against some key defendants. And so, despite how challenging the defendants have made this, we headed into trial with significant impacts on these defendants already. Richard Spencer [a neo-Nazi leader on trial] has called the case ‘financially crippling.’ Defendants have talked about how we’ve effectively bankrupted some of their organizations and their operations. Even before trial, we’ve marginalized some of these neo-Nazi leaders and defendants through the accountability they’ve already faced. So even with the challenges, it’s been heartening to see the impact it’s had on some of these leaders and groups.”

Legal case: “If they had come to Charlottesville with their swastikas, with their chants, with their views and their symbols that all of us might abhor and simply stood on the corner and waved those flags and chanted those things, [that] would have absolutely been protected conduct as abhorrent as any of us might find it. That is protected speech in America, and they have every right to do that. But that’s not what they did. They planned violence meticulously in advance through text messages, and those Discord chats and other communications that we’ve talked about. They came to Charlottesville and engaged in that violence. And then they celebrated that violence afterwards. And so again, that’s not simply speech, that’s a conspiracy.”

Right vs. left? “As far as I know, there hasn’t been a ‘Unite the Right’ on the left or some sort of comparable event. And that isn’t to say that there isn’t very real antisemitism on the left — there obviously is. It is real, it is alarming and it is manifesting in new and certainly emboldened ways, particularly over the last few years, as we’ve seen. I think it’s important to make that clear. But I also think that there is no equivalency in the moment that we’re in between antisemitism on the left and the right… We are living in a moment where neo-Nazis are so emboldened that they are walking into synagogues and killing people during Shabbat services and chanting ‘Jews will not replace’ us on our streets before they violently attack people. We are seeing the ideology that fuels this extremism become increasingly normalized. This idea of the Great Replacement [theory], in which Jews are the puppet-masters orchestrating the replacement of the white race of white genocide, through support for immigrants and refugees, Black and brown communities and a variety of other people. And we’re seeing how that sort of extremism is seeping into the mainstream… I don’t think it’s partisan to call that out. It can’t be partisan to call that out.”

Masochist? Spitalnick, who previously worked as press secretary to New York City Mayor Bill de Blasio, observed her propensity for difficult jobs. “I must be a masochist, because over my career I’ve worked in the Jewish community and [on] Israel issues, I’ve worked in politics and now I work on neo-Nazis. So it’s hard to know which is more difficult because they all have their own unique challenges. I will say, in some ways, being a flak in New York politics is harder than running an organization that holds neo-Nazis accountable. In certain ways. Of course, the risks of that job were perhaps less than the risks of this job. But certainly the challenges were significant.”

Lightning Round: Favorite Yiddish word? “Mishegas.” Favorite Jewish food? Bagel with smoked fish and a schmear. “I have not had that in a few weeks here in Charlottesville. I’m sure there is a delicious place to get Jewish food here in Charlottesville, but I have not been there yet. And so I think one of the first things I’ll do when I get back to New York is [go to] Russ & Daughters.” Book on reading list? Harlem Shuffle by Colson Whitehead. Favorite legal film character? “The cast of ‘My Cousin Vinny.'”