With politics in his blood, Gideon Taylor takes on Jewish community relations 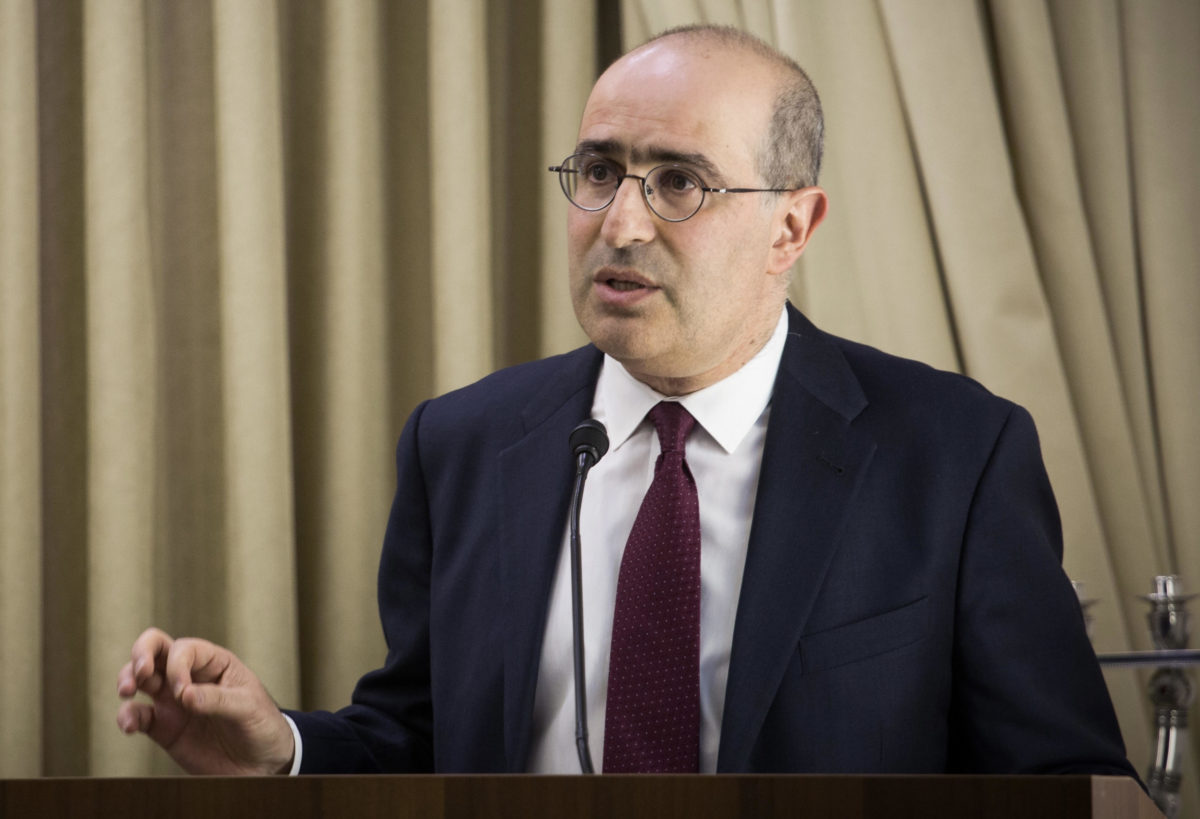 Gideon Taylor is no stranger to politics. The son of the first Jewish cabinet minister in Ireland, Taylor is now building his own political career of sorts as the recently appointed executive vice president of the Jewish Community Relations Council of New York.

Responsible for pulling together an increasingly polarized Jewish community and reaching out to an increasingly hostile wider community, Taylor – whose father was Mervyn Taylor, minister for equity and law reform in Dublin during the 1990s, and who passed away last September – understands the vast complexities of his new position.

He is also aware that the scale and scope of the Jewish community in New York are somewhat different from where he grew up. “I live on the Upper West Side and there’s more Jews on my block than there were in the whole of Ireland,” he quipped to Jewish Insider in his first interview since taking over in July.

“I think that New York is going through a time of incredibly radical change socially, economically and politically,” Taylor continued. “If there was a way to measure that change in simple terms and indicators, I think you would come to the conclusion there’s been more change in New York in the past few years than there was in the previous 20 years.”

Taylor recognizes the myriad challenges of uniting an extremely diverse Jewish population, as well as building ties with a rapidly changing general population, but he believes it is all possible with a bit of patience and a lot of education and outreach.

“New York is a big, complicated, diverse place, with many hundreds of thousands of people who grow up barely meeting or interacting with any Jews,” he said, adding, “In some ways, New York is a melting pot city, and, in some ways, people live in their own worlds, their own bubbles, and their own segments. I think the role of the JCRC is to break down those barriers and connect people –– that’s what community relations is all about.”

Taylor moved to New York in the 1980s after studying law in Dublin and at Oxford University and began his career in Jewish communal service at the American Jewish Joint Distribution Committee (JDC), participating in missions to rescue Jews in Syria, Yemen and Ethiopia. He went on to serve as executive vice president of the board of directors of the Conference on Jewish Material Claims Against Germany (Claims Conference), overseeing efforts to recover property that once belonged to Holocaust victims and distributing Holocaust restitution and compensation to survivors. More recently he worked in commercial real estate before taking over the JCRC.

He succeeds Michael Miller, who headed the organization for 36 years and became one of the city’s most prominent Jewish leaders. Miller’s tenure covered some of the more turbulent times in recent New York City history, including the Crown Heights riots of 1991, in which two people died and more than 200 were injured. In a sign of Miller’s enduring influence, Senate Majority Leader Chuck Schumer (D-NY) thanked him (along with Taylor) for his work at an event last month.

Speaking to JI, Taylor noted the contrast between today’s political and societal structures compared to when he first arrived in the city. “Then, the power structures were all very well-defined and concentrated in the hands of relatively few people, but now, the demographics have shifted tremendously and so have the structures of power,” Taylor said, citing a decline in Jewish members of the City Council from 27% just two years ago to 12% today.

He also identified New York’s rapidly changing demographics – with more divergent religious beliefs and increasing numbers of new immigrants – as another challenge to building bridges between the Jewish community and the rest of the city.

“I think a priority for us is building relationships with the people who are going to be running New York in three years, five years, and 10 years time,” Taylor said. “We want to expand our fellowships in schools, take in children from public schools, private schools, from Jewish, Catholic, and Islamic schools.”

And on college campuses, Taylor said the JCRC is already working with diversity officers. “We need to be at that table and engaging with those voices because they’re becoming more and more influential on issues around race and society,” he said.

Taylor also noted that if the Jewish community wants outside groups to care about the issues that are important internally, then it is essential for Jews to engage with issues important to those external partners.

“The JCRC needs to be the voice of the mainstream Jewish community at the tables where those critical issues of the day are being discussed in New York,” he continued, highlighting issues such as criminal justice reform and combating all forms of hate.

“The second one is a big priority for us,” Taylor highlighted. “Antisemitism is one example of hate crimes, but hate crimes, in general, are like cancer that corrodes the city, and what we’ve seen is that a person who attacks a Jew on the street is often the same person who will attack a person of color, or will be promoting anti-Asian hatred, Islamophobia or homophobia. Hatred knows no boundaries.”

He emphasized education as a way to combat racial hate and antisemitism, pointing out that the goal is to engage exactly with those “who’ve been immersed in a world of hate, or even in a world of BDS” because often they’ve grown up in that world and heard nothing else.

“We are trying to begin the conversation at a much earlier stage,” Taylor explained.

Among the many activities facilitated by the JCRC, Taylor points to its educational fellowships aimed at promising young leaders, as well as its efforts to shape state’s educational curriculum and tackle anti-Jewish content or sentiments. The programs it uses to train upcoming leaders also include addressing conversations around Israel, which has become a catalyst for antisemitism.

One way of doing that is by offering local leaders a chance to visit Israel. In the past, before the COVID-19 pandemic, the JCRC brought up-and-coming elected officials, including the recently inaugurated Mayor Eric Adams, to Israel, where programming offered a glimpse into Palestinian life. The pandemic has slowed those down but, said Taylor, they are hoping to resume them in the coming months, including with an invitation extended to the state’s new governor, Kathy Hochul.

Whether local politicians will accept those invitations is another matter. In 2020, the Democratic Socialists of America (DSA), which supports efforts to boycott, divest and sanction Israel, asked its candidates not to travel to Israel. When Democratic Rep. Jamaal Bowman (D-NY), a DSA member, went on an Israel trip with the dovish J Street last year, the Madison, Wisc., chapter called for his expulsion, a move the national DSA briefly considered.

“The goal is for them to come back from Israel and understand the complexity,” said Taylor of JCRC’s outreach efforts to elected officials. “It’s not a trip to try to convince a person to be one way or another, we want them to hear a diversity of opinions and issues within Israeli society and within Palestinian society and reject the simplistic assertions that tend to drive so much the discourse.”

Taylor is aware, however, that while such efforts have more long-term goals, they may fail to address a growing sense of alarm within the Jewish community in light of violent attacks such as the Tree of Life synagogue shooting in Pittsburgh and the more recent hostage-taking event in Colleyville, Texas.

“Sometimes threats like these create unity, but I think there needs to be ongoing work,” he said. “We need to be having discussions about this on an ongoing basis and not just when there’s a crisis, but obviously tackling this [violence] is also a priority for us going forward.”