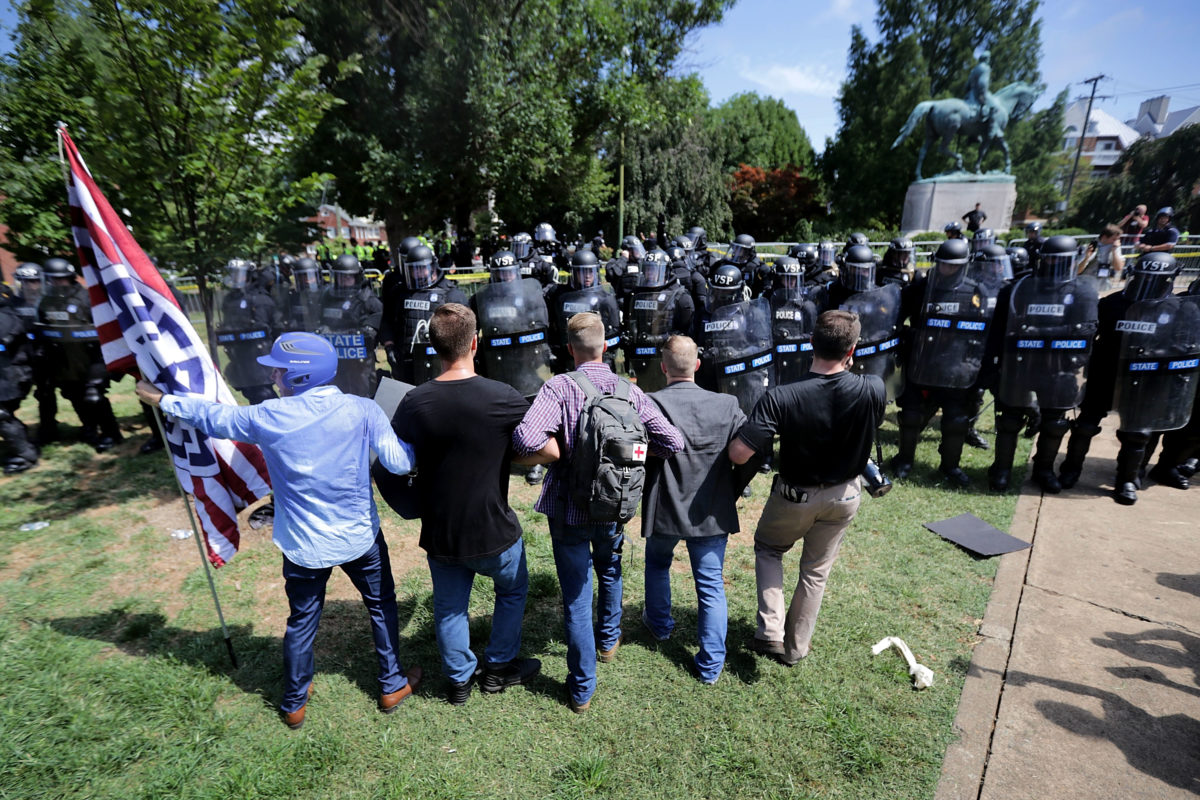 CHARLOTTESVILLE, VA - AUGUST 12: A small group of white nationalists, neo-Nazis and members of the "alt-right" face off with Virginia State Police in front of the statue of General Robert E. Lee after the "Unite the Right" rally was declared an unlawful gathering August 12, 2017 in Charlottesville, Virginia. After clashes with anti-fascist protesters and police the rally was declared an unlawful gathering and people were forced out of Emancipation Park, where a statue of Confederate General Robert E. Lee is slated to be removed. (Photo by Chip Somodevilla/Getty Images)

White supremacists and neo-Nazis will return to Charlottesville, Va., this week, four years after they marched through the sleepy college town’s streets chanting Nazi slogans in the violent Unite the Right rally. This time, they’ll be in a courtroom — defendants in a sprawling lawsuit filed against them in federal court, seeking to hold them accountable for what plaintiffs allege was a carefully coordinated violent riot.

The plaintiffs bringing the suit, which is set to begin today with jury selection, are Charlottesville residents who charge that they experienced physical and psychological trauma on Aug. 11-12, 2017.

“It was really frightening to be here and to watch Nazis march down the UVA Lawn saying, ‘You will not replace us,’” said Micah Schwartzman, a law professor at the University of Virginia and board president of Congregation Beth Israel, the city’s only synagogue, which has about 400 members. “For Nazis to walk past the synagogue between the [Robert E.] Lee monument and the [Andrew] Jackson monument in full body armor with semiautomatic weapons was shocking.”

The case is called Sines v. Kessler, named for plaintiff Elizabeth Sines — a University of Virginia law student who has suffered “severe emotional distress” since witnessing a car drive into a crowd — and defendant Jasson Kessler, one of the rally’s organizers and a member of the Proud Boys, a far-right extremist group. Lawyers for the defendants argue the organizers’ actions are protected under the First Amendment.

The civil lawsuit argues that the Unite the Right rally’s organizers were steeped in a form of racial prejudice that holds antisemitism at its core. A call to arms posted on the Daily Stormer ahead of the rally said, “We will eventually win this struggle and secure the existence of our people and future for white children. It is our destiny. Next stop: Charlottesville, VA. Final stop: Auschwitz.”

Deborah Lipstadt, President Joe Biden’s nominee to serve as the State Department’s special envoy to monitor and combat antisemitism, will be called to testify as an expert witness. She had to be granted a special waiver from the State Department to participate in the trial.

A copy of her expert report filed in the case argues that “the white supremacists see Jews as one of their primary targets. In fact, the racist ideology associated with white supremacist organizations is inexorably linked to its Jew-hatred.”

The plaintiffs’ case hinges on a statute that reaches back to the years following the Civil War. “The lawsuit is a conspiracy case brought under the Ku Klux Klan Act of 1871, and this 150-year-old statute, specifically, is meant to protect against racially motivated violent conspiracies,” said Amy Spitalnick, executive director of Integrity First for America, the nonprofit that is funding the suit. “The violence in Charlottesville was so clearly motivated by racial animus that included not just racism and xenophobia, but obviously very obvious and explicit antisemitism.”

Spitalnick told Jewish Insider that security is the largest line-item expense in IFA’s budget when it comes to the lawsuit. Greg Ehrie, the Anti-Defamation League’s vice president for law enforcement and analysis, said his team has been monitoring social media discussions around the trial closely and working with local law enforcement officials in Virginia to secure the event.

“We’re not seeing any of what we would call ‘active threats,’” Ehrie said. “That could always change. That’s why it’s not a one-time [situation] — it’s not like predicting the weather, and then you leave it. This will continue all throughout the trial.”

The 2017 Unite the Right rally began on Aug. 11 with the infamous Friday night scene of white men walking the streets of the city with tiki torches, chanting “Blood and Soil” and “Jews will not replace us.” The next morning, neo-Nazis marched by the synagogue. Alan Zimmerman, then the president at CBI, called it an “eye-opening experience.” He was at the synagogue that day for Shabbat services.

“It really changed my view as to the place of Jewish Americans in our country. It made me feel more different than I’ve ever felt as a Jew in America ever,” Zimmerman said.

After the rally and the burst of national attention that followed, “our security totally changed. We spent a great deal of money installing security systems,” Zimmerman noted. “The way that our synagogue was run, previous to 2017, was the doors were not locked. Nobody paid attention to who would come into the building or who was going out of the building. There was no security to speak of.”

Now, the synagogue locks the doors. Members are told not to let in people they don’t recognize, and to follow a “see something, say something” policy. “These steps had a financial impact. We have paid for them. That’s money in our community that could have gone towards some other form of programming,” said Zimmerman. CBI has received funding from the federal Nonprofit Security Grant Program to help pay for security costs.

Many members of Charlottesville’s tight-knit Jewish community of about 800-plus families plan to closely watch the trial, which is expected to last up to a month. And while they are hopeful about the effect it could have in targeting racial violence, they are hesitant to say it will bring this chapter of their lives to a close.

“I do have hope that the trial will have the effect that Integrity for America wants, which I think has a lot to do with exposing the organizers of the Unite the Right rally and really showing that it was not really a hodgepodge, randomly organized event but was really well orchestrated and carefully planned,” said Rabbi Dan Alexander, rabbi emeritus at Congregation Beth Israel. He stepped down as senior rabbi in 2016, although he remains involved at the congregation and has lived in Charlottesville for more than 40 years.

Schwartzman said that the persistence of the hateful ideologies on display in Charlottesville four years ago means that it is hard to simply declare this event to be over.

“I don’t know that it will generate closure, because I think we continue to see events that involve some of the same players, or those with similar ideologies,” Schwartzman said. “I have especially in mind the events of January 6 [at the U.S. Capitol]. I think some of the individuals who are represented here, the defendants here, represent a broader movement and ideology.”

For Zimmerman, who was “literally in the middle of it on the day that it happened,” healing and moving on is an “internal process.”

“The idea that some verdict from a judge that neo-Nazis conspired to come here and commit violence, it’s just not going to affect that for me,” he explained.

That the events of August 2017 took place in a college town means that very few of the roughly 25,000 students at the university were in Charlottesville at the time, which has led to a disconnect between students and the faculty and other professionals affiliated with the university around the trial.

“There seems to be a gap,” said a UVA professor who asked not to be identified to speak candidly about the campus. “I think the local community is pretty freaked out, to put it simply. They’re anxious. A lot of trauma stirred up, a lot of worries. I think students are not as aware of what’s going on. They don’t seem to be actually aware it’s about to begin. Many students don’t know that. There hasn’t been a lot of chatter about it.”

The case is being litigated by several powerhouse liberal attorneys, including prolific trial lawyer Karen Dunn, who also served in the Obama administration, and Roberta Kaplan, who is best known for running the TIME’S UP Legal Defense Fund and for arguing on behalf of Edith Windsor in the seminal 2013 gay marriage case that led to the Supreme Court overturning the Defense of Marriage Act.

The plaintiffs have already won default judgments from the judge against seven of the defendants who did not participate in pretrial discovery or respond to pretrial motions.

“If there were things to say on their own behalf, they haven’t done that. I think that’s important and quite telling that there aren’t defenses for some of the actions that they engaged,” said Schwartzman. “I think that there is a general consensus that they acted well beyond their constitutional rights and engaged in criminal conspiracy [leading to] direct and immediate harms and civil rights violations.”