The Democratic majority whip stumped for the freshman rep in her second go-round against progressive Nina Turner; contest for Jewish vote heating up 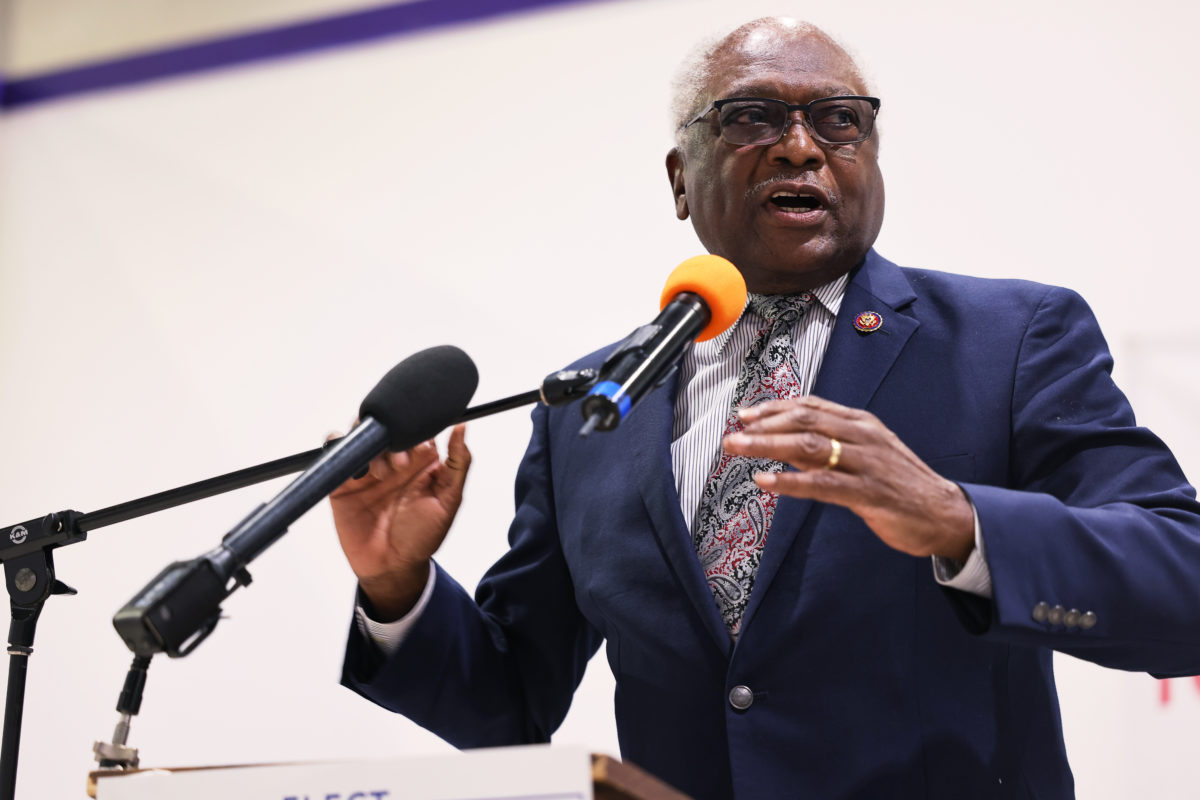 Rep. James Clyburn (D-SC) speaks during a Get Out the Vote campaign event at Mt. Zion Fellowship on July 31, 2021, in Cleveland, Ohio.

CLEVELAND — Rep. Jim Clyburn (D-SC), the powerful House majority whip, was back in Cleveland this weekend to gin up support for freshman Rep. Shontel Brown (D-OH) as she seeks her first full term, just under nine months after the closely watched special congressional primary in Ohio’s 11th District.

“She has acquitted herself very well as a member of Congress,” Clyburn said in an interview with Jewish Insider on Friday before leaving for Ohio. “She told everybody when she campaigned that she was going to go to Washington and be supportive of the Biden administration and its agenda, that she would represent the people of the 11th Congressional District in a way that would make them proud, and I think she’s done that.”

Brown, a former Cuyahoga County councilwoman, had cast herself as a faithful steward of President Joe Biden’s legislative pursuits when she squared off against Nina Turner last August in the high-profile race to succeed retired Rep. Marcia Fudge (D-OH). In an upset in August, Brown prevailed over Turner, a high-profile progressive stalwart, by a margin of nearly six percentage points, despite having entered the race as an underdog. Brown handily defeated her Republican opponent in the November general election.

Now, Turner is trying for a rematch in Tuesday’s regularly scheduled primary election.

The race hasn’t drawn as much attention as the last primary battle, as it takes place during a midterm cycle in which Democrats have had their eyes on a number of consequential matchups that could determine whether they hold on to their tenuous majority in the House.

Still, a number of Brown’s new colleagues in Washington remain invested in keeping her there. In addition to Clyburn, who touched down in Cleveland on Saturday, Reps. Nikema Williams (D-GA), Ritchie Torres (D-NY) and Hakeem Jeffries (D-NY), the chairman of the House Democratic caucus, all stumped for Brown this weekend.

Members of Cleveland’s sizable Jewish community — along with a range of national pro-Israel groups — are also working to help Brown get reelected.

The political arm of Democratic Majority for Israel, for instance, which spent more than $2 million on her behalf in 2021, last month released its first TV ad of the cycle in support of Brown’s campaign. AIPAC’s newly formed super PAC has spent money in the race as well, including $77,000 supporting Brown and $143,000 opposing Turner, who alienated a wide swath of Cleveland’s sizable Jewish community after she criticized Israel as an apartheid state during the conflict with Gaza last May.

Despite such entreaties, the local Jewish community still seems largely aligned with Brown, who campaigned alongside Jeffries and Williams on Sunday at an Orthodox synagogue in Beachwood, a heavily Jewish suburban enclave that saw some of the highest turnout in the race last year.

The district’s updated boundaries, which were only recently approved, now include all of Cleveland and new sections of western Cuyahoga County such as the city of Lakewood.

Turner, sensing opportunity, has estimated that approximately a third of the district’s voting population is new.

In the interview with JI, Clyburn argued that the Jewish community had done “the right thing in supporting” Brown last summer. “I think they ought to redouble their efforts to reelect her.”

The congressman did not appear at the synagogue event but spoke afterward during a campaign rally at Cleveland’s Mount Olive Baptist Church on Sunday that was also attended by Jeffries and Williams.

Elaborating on his affinity with the congresswoman, Clyburn described himself as a longstanding admirer of Harry S. Truman, in part because of his appreciation for the former president’s decision to officially recognize the State of Israel just minutes after its creation in 1948. “Jim Clyburn, as everybody in the Congress will tell you, is a Truman Democrat,” he told JI, “and Shontel is of that same notion. She doesn’t care how new it is. She wants to be fair.”

Last cycle, the primary between Turner and Brown took special prominence on the national stage as a fierce proxy battle featuring what many viewed as opposing moderate, progressive and even generational forces within the Democratic Party.

Brown, a Fudge protégé with strong ties to the local Democratic establishment, drew a contrast with Turner, a Squad-aligned former Ohio state senator, backed by Justice Democrats, who had served as an outspoken presidential campaign surrogate for Sen. Bernie Sanders (I-VT).

But Clyburn — who was part of a procession of leading House Democrats who descended on the district in the final weeks of the race last year — dismissed such characterizations, noting that Brown, 46, had in many ways bridged such divides over the course of her first months in Congress.

“She’s from a bit of a different generation than mine, and I think that she demonstrates to people that this whole notion about there being this generational divide is not quite the case,” Clyburn, 81, argued. “She’s certainly been a big support to the Biden administration. I think that Biden would tell you that.”

On Friday, Biden — who benefited from Clyburn’s pivotal endorsement in the 2020 presidential primary — threw his support behind Brown’s campaign, describing the recently elected incumbent as an “ardent advocate for the people of Ohio and a true partner in Congress.”

For his part, Clyburn said Brown had offered crucial assistance as he sought to usher the $1 trillion bipartisan infrastructure package through the House last November, pointing in particular to her support for legislation that would include more than $65 billion for broadband investments.

“Broadband is not a traditional infrastructure issue, but it had to be a significant part of this,” Clyburn told JI. “Shontel was one of my lieutenants when I was working to get people understanding why broadband was so important, not just” in “rural but also urban” areas.

By contrast, Turner opposed immediately approving the infrastructure package at the time, aligning herself with a vocal coalition of far-left House members who voted against the funding while protesting the Senate’s delay in passing a broader social safety net and climate package.

Clyburn expressed frustration with such efforts in conversation with JI. “That vote was huge,” he said bluntly. “I was very disappointed when I heard people characterizing it — someone even called it racist or something, I can’t remember what that was — it was really crazy.”

“It goes to the notion that I often say to especially young people: You’ve got to make up your mind,” he explained. “Are you interested in public service in order to make headway, or is your interest to make a headline? Lots of people got some headlines saying uncomplimentary things about that infrastructure bill. But I would like to know who can show me any piece of legislation regarding our country’s infrastructure that’s been more consequential.”

The long-serving congressman, who is also up for reelection this cycle but is at no risk of losing his seat, said he was not surprised that Turner, 54, is back at it this cycle. “People tend to subscribe to the notion that any member of Congress, especially in the House, is most vulnerable in the first reelect than any other time,” he told JI, shying away from direct criticism of her efforts.

Clyburn has emphasized that he simply favors Brown over Turner, noting that he has worked with the congresswoman “quite a bit” since she assumed office in November 2021. “I seek her advice and every now then she seeks mine,” he told JI somewhat self-effacingly. “I’ve been very, very pleased to work with her.”

Still, some more personal motivations appeared to have been at play when he waded into the race last cycle. His endorsement came shortly after Turner appeared at a town hall where the rapper Killer Mike had criticized Clyburn as “stupid” for endorsing Biden without first having “cut a deal” to attain more “tangible” results for Black voters than the subsequent adoption of Juneteenth as a federal holiday. Turner, for her part, nodded along in agreement.

“They called me dumb,” Clyburn said in an interview with JI last July, ahead of his first trip to Cleveland for the Brown campaign. “I smiled and said, well, I was called dumb or stupid.”

While Brown and Turner are broadly aligned on a number of domestic policies — including Medicare for All, a marquee item in the progressive policy agenda — Turner has argued that the district is in need of a “fighter” who will aggressively champion such causes in the House.

“These are unprecedented times,” Turner said in a campaign kickoff video while announcing her second House bid in January. “Our leaders can’t settle for ‘just enough.’ They must fight for what we deserve.

Brown’s victory was by no means assured when Clyburn, who is viewed as something of a Democratic kingmaker, issued his endorsement last summer, only a month before the primary and a couple of weeks after former Secretary of State Hillary Clinton had announced her support for Brown’s campaign.

This time, Brown is better poised to defend the seat. She has raked in endorsements from a number of high-ranking local leaders, including Cleveland’s new mayor, Justin Bibb, as well as the Congressional Progressive Caucus, of which she is a member. The caucus previously backed Turner, who has earned a repeat endorsement from The Cleveland Plain Dealer and pulled in support from several local progressive groups.

Brown was sitting on nearly $760,000 in campaign contributions as of mid-April, according to the latest filings from the Federal Election Commission. Turner, with just over $480,000 in the bank, had comparatively less cash on hand heading into the final stretch.

There is no publicly available polling on the race.

The victor of Tuesday’s Democratic primary will be heavily favored in the November election because the district remains safely blue.

Some other seats, however, are less clear-cut, as Clyburn suggested at the end of the interview.

On Wednesday, the majority whip will travel on to San Antonio to campaign for another Democratic colleague, Rep. Henry Cuellar (D-TX), who is going up against a progressive primary challenger, Jessica Cisneros, for a second consecutive cycle. Cisneros, an immigration attorney backed by Justice Democrats and J Street, recently forced the conservative-leaning congressman into a runoff on May 24.

Cuellar — perhaps the only remaining House Democrat who opposes abortion — represents a district of South Texas, the 28th, that is rated a “toss-up” by the nonpartisan Cook Political Report.

With such dynamics in mind, Clyburn made clear that he was standing with Cuellar as he engages in a broader strategy of maintaining a Democratic majority in the House. “I don’t want to take any risk of getting somebody nominated who can’t win the seat in November,” Clyburn explained. “I don’t lose votes, and one reason I don’t lose votes is because of Henry Cuellar,” he added. “He is a critical part of my whip operation, and I cannot see myself not supporting a person who’s been so supportive.”