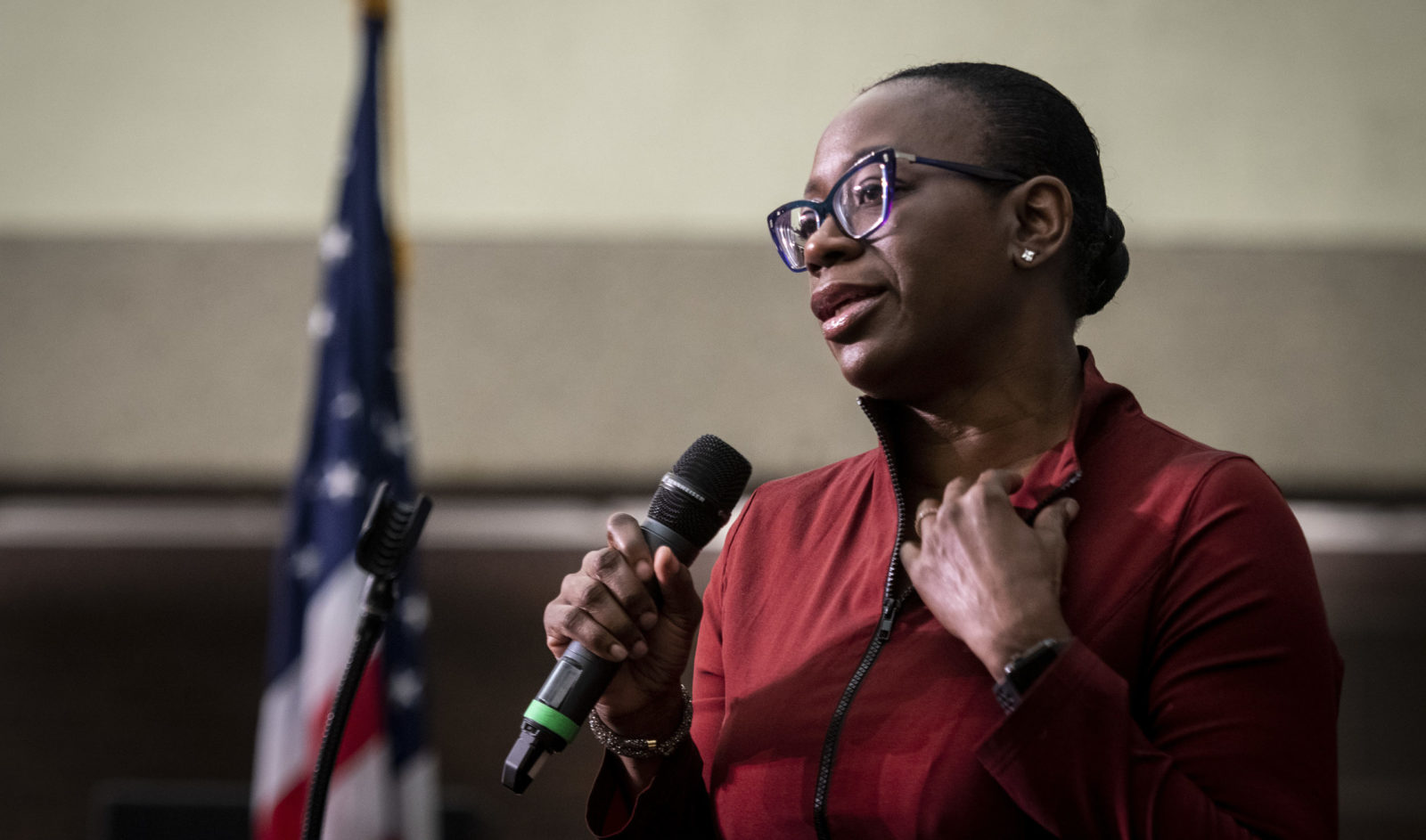 Shontel Brown has the support of establishment Democrats, while Nina Turner is vying to join ‘The Squad’

As Rep. Marcia Fudge (D-OH) awaits confirmation to lead the Department of Housing and Urban Development, the race to claim her soon-to-be-vacated seat in Congress is intensifying by the day. No fewer than five candidates have lined up to compete in the crowded Democratic primary — and more are likely to declare ahead of the highly anticipated special election, which has yet to be scheduled by Ohio Gov. Mike DeWine, but is expected to be held on May 4.

Whoever wins is all but certain to prevail in Ohio’s sapphire-blue 11th congressional district, encompassing a large portion of Cleveland and a sliver of Akron. Though it is still early in the race, two candidates, Shontel Brown and Nina Turner, have emerged as frontrunners, according to Democratic strategists in Ohio, and their differences in many ways typify what has come to be seen as a growing divide within the Democratic Party between moderates and progressives.

Brown, a Cuyahoga County councilwoman, is a center-left consensus-seeker who, as chairwoman of the Cuyahoga County Democratic Party, has developed strong mainstream party connections thanks to her close mentor relationship with Fudge. “I want to go to D.C. to be a partner to the Biden-Harris administration and help Speaker Nancy Pelosi pass an agenda that will help the people in this district,” Brown, 45, told Jewish Insider in a recent interview.

Turner, on the other hand, is an outspoken progressive who served as a Cleveland City councilwoman and an Ohio state senator before raising her national profile as the president of Sen. Bernie Sanders’s (I-VT) political group Our Revolution. Most recently, Turner served as national co-chair of Sanders’s 2020 presidential campaign. The 53-year-old congressional hopeful once likened voting for President Joe Biden to eating “a bowl of shit,” and identifies as an honorary Squad member — a message she has hammered home in fundraising emails. “I’ve been able to build a relationship with each one of the Squad members, some deeper than others,” Turner said in a phone conversation with JI this week. “We have an affinity for each other.”

The contrast between the two candidates becomes more stark around Israel, a topic that is increasingly a point of tension within the Democratic Party. While Brown is quick to cast herself as a strong supporter of the Jewish state, having recently visited on a trip sponsored by the AIPAC-affiliated American Israel Education Foundation, Turner calls for conditioning aid to Israel and avoids clarifying her own personal position on the Boycott, Divestment and Sanctions movement.

“From a foundational perspective, it’s just a free speech issue for me,” Turner said of BDS. “I haven’t taken it any further than that.”

Turner’s foreign policy views, as well her alliance with the far-left flank of the Democratic Party, have given pause to Jewish constituents in the 11th district, who represent a sizable voting bloc and have had a strong relationship with Fudge throughout her time in office. “I view her candidacy with some degree of concern,” said Rob Zimmerman, a Shaker Heights city councilman and pro-Israel advocate who got to know Turner when she was in the state Senate between 2008 and 2014.

Zimmerman described his relationship with Turner as a warm one, but said they have lost touch as Turner has gained prominence on the national stage. Now Turner’s political affiliations — including an endorsement from Justice Democrats, which had previously labeled Israel a “human rights violator — have given Zimmerman reason to question whether she will be interested in engaging with Jewish community members whose views she might disagree with.

He isn’t alone. “She is more concerned, I think, with promoting an agenda than serving her constituency,” said Michael Siegal, a Cleveland resident who is the chairman of the Jewish Agency for Israel’s board of trustees.

Turner emphasized to JI that she developed a “very strong relationship” with the Jewish community in her old senate district. “That will continue,” she said. Looking back on her time in the state legislature, Turner pointed to her support for allocating funds to religious schools. “All Jewish people are not wealthy,” she said, “and it was important that the state helped to fund some of that.”

A.D. Motzen, who worked closely with Turner when he was Ohio regional director at Agudath Israel, recalled the former state senator being attentive to the Orthodox Jewish community’s needs, particularly around school choice. “This came from her belief in helping struggling families in her district to get the education they needed,” said Motzen, who is now Agudath Israel’s national director of state relations.

“I see her as very constituent-oriented,” echoed Marty Gelfand, a lawyer, Jewish community member and former South Euclid city councilman who is supporting Turner’s congressional bid. Though he imagines that he will disagree with her on Israel if she makes it to Congress, he believes they can still find common ground on certain domestic issues. “She’s no stranger to the Jewish community.”

But as the race heats up, the Jewish community appears to be coalescing around Brown, whom Siegal approvingly described as a “moderate Democrat who leans on social justice but is willing to have an open mind on foreign affairs.” Siegal, who previously chaired the Jewish Federations of North America, said he spoke with Brown personally before deciding to support her. “She wants to learn, she is inquisitive and she has a track record of being collaborative,” he told JI. “She is concerned about the issues of the Jewish community.”

Siegal donated $1,000 to Brown’s campaign in late December, according to filings from the Federal Election Commission.

Most pro-Israel groups have yet to make endorsements in the open-seat race, but one grassroots organization, Pro-Israel America, shared exclusively with JI that it is planning to back Brown. “We need leaders in Congress who value the U.S.-Israel relationship and will work to strengthen security, economic, scientific and cultural relationships between our two nations,” said Jeff Mendelsohn, Pro-Israel America’s executive director, “and that candidate in the 11th district race is Shontel Brown.”

In conversation with JI, Brown recalled her first trip to Israel in 2018, which she said gave her a heightened sense of appreciation for the country’s security measures. “It gives you a much greater and tangible and realistic appreciation for the vulnerability of this state,” she said. “Admittedly, I was eager to go to see the holy sites,” Brown added, “but really kind of got equally enamored by the energy and the bustling democracy that was on display before me. It was really a sight to see.”

Brown rejects the BDS movement, supports a two-state solution to the Israeli-Palestinian conflict and opposes withholding or conditioning aid to Israel. “I believe Biden said it was outrageous to leverage that, and I agree,” she said. “We can have disagreements without threatening financial penalties, and that approach does not promote the special relationship that I think that we share with Israel.”

Turner sees things differently. “For 60 years,” she told JI, “the Congress has said that our foreign assistance should respect human rights in any country.” But she was ambiguous as to how conditioning aid would be accomplished, even when asked if she was in alignment with her former boss’s suggestion that some U.S. aid to Israel should be redirected to Gaza. “The will of the American people has been that our money is used for humanitarian causes,” she said, adding: “It doesn’t have to be an either or.”

Despite her more critical views, Turner said she was “open” to visiting Israel if she is elected, adding the caveat that she is “also open to seeing what’s happening with our Palestinian sisters and brothers too.” For Turner, “one of the most important things that I can do as an elected official and that we can do as a nation is continue to dialogue amongst the community, the Jewish Americans, our Palestinian-American sisters and brothers,” she said, “both here and also over there.”

Turner is building a formidable coalition of supporters as she makes her bid for federal office, racking up endorsements from progressive stalwarts including Minnesota Attorney General Keith Ellison as well as Reps. Cori Bush (D-MO) and Ro Khanna (D-CA). “So much of our politics is dominated by power, privilege and class,” Khanna told JI. “Nina Turner is one of those rare leaders who champions the underdog and who believes that all people have purpose and value.”

Turner’s high-profile donors include Mark Ruffalo, Marianne Williamson, Susan Sarandon, Cynthia Nixon and Andrew Yang — and she has raised nearly $650,000 according to the latest FEC filings, far outpacing Brown, who has only pulled in around $40,000 with support from the likes of Cedric Richmond, the former congressman who was recently appointed to be the Biden White House’s director of public engagement, along with Cleveland business leaders Dave Heller and Al Ratner.

“She’s been afforded a national audience, but when you consider the resources, much of that money is coming from outside of the district, the majority of it, in fact,” countered Brown, who claims that most of her donations come from local supporters. “I trust that those are the folks that will come out and have a vested interest in who will represent them.”

Jeff Rusnak, a veteran Democratic strategist in Cleveland, offered a similar view. “Handicapping this race is difficult at this point,” he said. “Obviously at this early stage, Nina Turner has the money advantage. Do I think that could easily change? Yes, I think that could change.”

John C. Green, director emeritus of the Ray C. Bliss Institute of Applied Politics at the University of Akron, said it would be unwise to count Brown out, particularly in a multi-candidate race. “In primaries and special elections,” he said, “party connections turn out to be extremely important.”

But somewhat conspicuously, Democratic Party leaders have steered clear of the race as Turner has dominated the headlines. Congressional Black Caucus heavyweights like Reps. Hakeem Jeffries (D-NY) and Joyce Beatty (D-OH) did not respond to email inquiries about an endorsement, nor did Fudge, despite Brown’s claim that they are aligned on most issues. “I’m pretty confident that I have her support,” Brown said. Majority Whip Jim Clyburn (D-SC) does not plan to make an endorsement in the race, according to a source familiar with his thinking.

“The problem is, it’s hard to endorse anyone other than Nina when it seems like Nina is going to win and join your caucus even when you don’t want her to win,” said a national Democratic operative with ties to Ohio who asked for anonymity to speak candidly.

And in a safe Democratic district, Turner’s far-left agenda is unlikely to hinder her prospects, according to the operative. “The only way someone could use it against her would be to paint her as anti-Biden.”

Speaking to JI, however, Turner was largely conciliatory, despite her past criticism of mainstream Democrats. “I do believe that between the Congressional Black Caucus and the Progressive Caucus, if we come together, there are some great things that we can do,” she said, adding that she had spoken with Fudge about her run and that she wishes the longtime congresswoman the best ahead of her confirmation.

Turner even reserved some praise for Biden, pointing to his effort to raise the federal hourly minimum wage.“The progressive movement,” she said, “has continued to push politicians to where we need them to be.”

“I see this run,” Turner concluded, “as an extension of a ministry.”