Speaking at a Cleveland synagogue, the Democratic leader compared Brown and challenger Nina Turner to David and Goliath 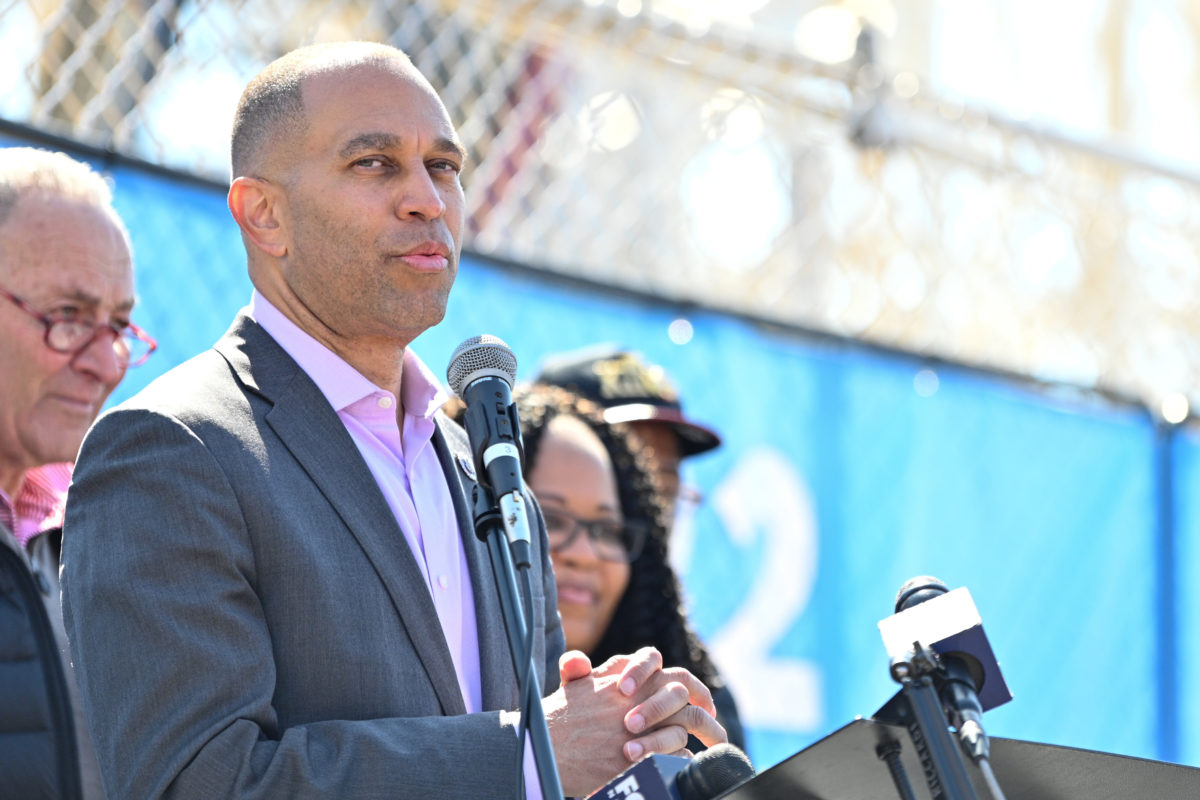 Rep. Hakeem Jeffries (D-NY) speaks at Luna Park on the opening day of the season at Coney Island on April 2, 2022, in Brooklyn.

CLEVELAND — Standing before a modestly sized audience at an Orthodox synagogue here on Sunday, Rep. Hakeem Jeffries (D-NY), the influential chairman of the House Democratic caucus, voiced his enthusiastic appreciation for the sizable number of Jewish voters who turned out for Rep. Shontel Brown (D-OH) last summer in a hotly contested special House election that was among the most high-profile races of the previous cycle.

“I’m thankful for the work that all of you did in electing Shontel Brown in what was a high-profile, difficult and, in the view of many, uphill struggle, certainly a David-versus-Goliath struggle,” Jeffries said of Brown’s come-from-behind victory over Nina Turner, a former state senator and prominent progressive leader, in Ohio’s 11th Congressional District. “With your support, and with this tremendous candidate, we’re thankful that David prevailed.”

Jeffries, whose New York City district includes portions of Brooklyn and Queens, was in Cleveland this weekend to help ensure that Brown prevails once again as she faces a rematch with Turner in Tuesday’s Democratic primary only six months after assuming office.

“She’s come to Washington and been such a force for good, both in terms of domestic policy and in terms of standing on the side of this special relationship that the United States has with Israel, a relationship that I’ve been proud to try to uplift and undergird during my time in Washington,” Jeffries told the crowd of Jewish community activists and local elected officials at Green Road Synagogue in the heavily Jewish suburb of Beachwood, which saw some of the highest turnout in the race last year.

The Democratic leader was joined by another recently elected congresswoman, Rep. Nikema Williams (D-GA), the chairwoman of Georgia’s Democratic Party. “I didn’t wear heels today,” Williams said to laughter, “because I came to knock on doors.”

Jeffries, who has built close ties with Jewish leaders in New York City and beyond, drew some chuckles himself as he peppered his remarks with the witticisms he has long used to endear himself to Jewish audiences during his time in Congress and before that as a state assemblyman. “Back at home, we consider Jerusalem to be the sixth borough,” said Jeffries, who also quipped that he represents the “16th most Jewish” district in the country.

He emphasized that Brown had swiftly established herself as an “outspoken voice” against rising “antisemitism and hate crimes” that have been directed at the Jewish community. “We’re going to do everything we can to stamp it out,” he said, describing recent violence as “shocking, appalling and unacceptable.”

Opposing such incidents, Jeffries suggested, includes standing “firmly with” Israel to support its “right to exist” as a Jewish state in what he characterized as increasingly inhospitable territory. “As I often say, one of the toughest neighborhoods in the world,” Jeffries noted. “Hamas in Gaza, a dangerous situation in the Sinai, Hezbollah to the north, chaos in Syria, a mess in Iraq,” he elaborated, “and Iran, with nuclear aspirations, threatening to wipe Israel off the face of the earth.”

“I’m from Brooklyn,” Jeffries, 51, told the audience. “Shontel is from out here in Northeast Ohio. We know what it takes to live in a tough neighborhood. The only thing at the end of the day that people respect is strength. You can achieve peace and prosperity and a whole lot of other good, but in a tough neighborhood, you’ve got to be strong. That’s why I’m thankful that Shontel has been clear from day one when she arrived that we’re going to do everything necessary to make sure that Israel maintains its qualitative military edge today, tomorrow and forever.”

Jeffries made no mention of Turner at the synagogue event, but it was clear he was in some ways drawing a contrast between the two candidates, not least because Turner, a former presidential campaign surrogate for Sen. Bernie Sanders (I-VT) who aligns with the Squad, has expressed support for conditioning U.S. security assistance to Israel, among other things.

Shortly after the primary last August, Jeffries spoke in somewhat feistier terms as he assessed the race. Turner’s defeat had demonstrated that voters were rejecting “extreme left” candidates who are “obsessed with talking trash about mainstream Democrats on Twitter,” he said in a sharply worded interview with The New York Times, “when the majority of the electorate constitute mainstream Democrats at the polls”

In a brief interview with Jewish Insider after he had stepped away from the lectern, Jeffries praised the Cleveland Democrat — a former Cuyahoga County councilwoman and current party chair — as “a unifying voice” as well as “a common-sense, pragmatic, get-stuff-done representative.”

“Shontel Brown has hit the ground running and has been a tremendous supporter of lifting up the special relationship between the United States and Israel,” he added, reiterating his initial remarks. “We expect great things from her both in terms of domestic policy and international policy moving forward.”

Following the event on Sunday afternoon, Jeffries and Williams traveled on to a campaign rally at Cleveland’s Mount Olive Baptist Church, where Rep. Jim Clyburn (D-SC), the House majority whip who touched down in the district on Saturday, delivered remarks to drum up support for Brown’s campaign as the race enters its final stretch.

Jeffries, for his part, concluded the synagogue speech with a benediction of sorts.