The Florida congressman, who will become the CEO of the American Jewish Committee later this year, made the comments at a gathering of Jewish communal leaders from around the country 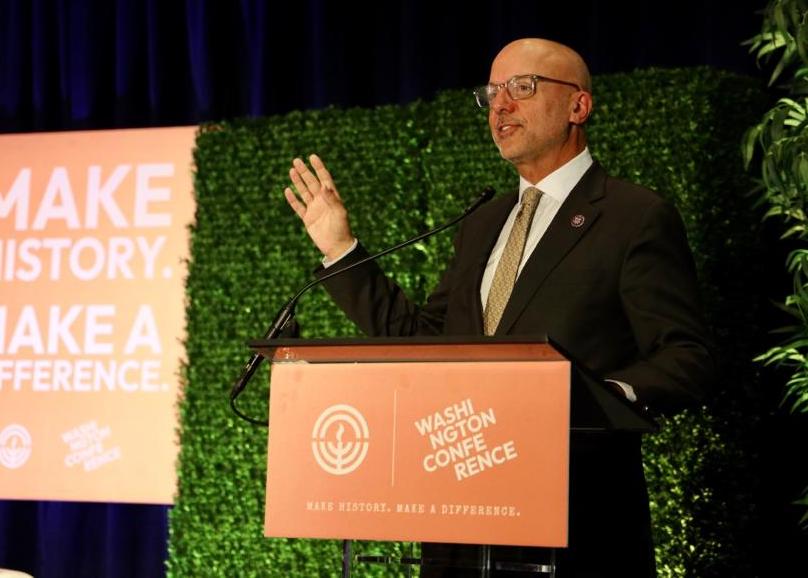 The Jewish Federations of North America

Activists who are hostile to Israel “don’t want to talk about” the “changing nature of the Middle East,” Rep. Ted Deutch (D-FL) said on Wednesday, pointing to the Abraham Accords as a “perfect example” of Israel forming alliances in the region.

“It’s no longer a question of being critical. It is an outright hostility to Israel… They don’t want to talk about the fact that more and more countries want to align themselves with Israel and everything Israel has to offer,” Deutch said at The Jewish Federations of North America’s Washington Conference. “The Abraham Accords will grow. I have no doubt there will be more countries to join there, as people look at what we know as the modern miracle, the modern State of Israel.”

Last June, the Florida congressman decried comments from far-left House members, linking domestic antisemitism to the previous month’s conflict between Israel and Hamas. On Wednesday, Deutch doubled down on the comments he made on the House floor last year, during which he accused some legislators of making antisemitic comments.

“When your position is that the only state in the world that shouldn’t exist is the one Jewish state, then we have an obligation to make sure that people understand that that’s antisemitism,” he told Jewish communal leaders. “We need other people to understand that as well.”

Deutch was asked about the recent decision by a Lufthansa crew to bar a group of Jewish travelers in Frankfurt, Germany, from continuing on to their destination, after some in the group had not worn masks on the prior leg of their flight. The congressman, who co-chairs the Congressional Study Group on Germany, called for “accountability” over Lufthansa’s actions.

“I reached out and will engage more directly with them to understand. I don’t want to rely just on what I’ve read. But what I read is terrible… the singling out of people because they appear to be Jews. And I think we need to get to the bottom of it.”

Deutch was speaking in one of his first in-person addresses to a major Jewish organization since announcing that he will leave Congress later this year to helm the American Jewish Committee, which has worked extensively in Germany.

Deutch also addressed right-wing antisemitism, sharing details about his experience during the Jan. 6 riot at the Capitol.

“I did all the things that the Capitol Police told me to do. I got into the back corner of my office in a cubicle. The lights are off, I pulled down the blinds, I silenced my electronics. And I sat there and I listened to people in the hallway, having no idea whether it was insurrectionists, if they were coming close or not. How pathetically sad is it that the first thing that went through my mind is, ‘Well, I just moved into this office. So thank God, I haven’t yet had the opportunity to hang a mezuzah.’”