'If your position is that there’s no place for a Jewish state, there are people in the United States who hear that the entire state of Israel is some unacceptable creation,' the lawmaker said 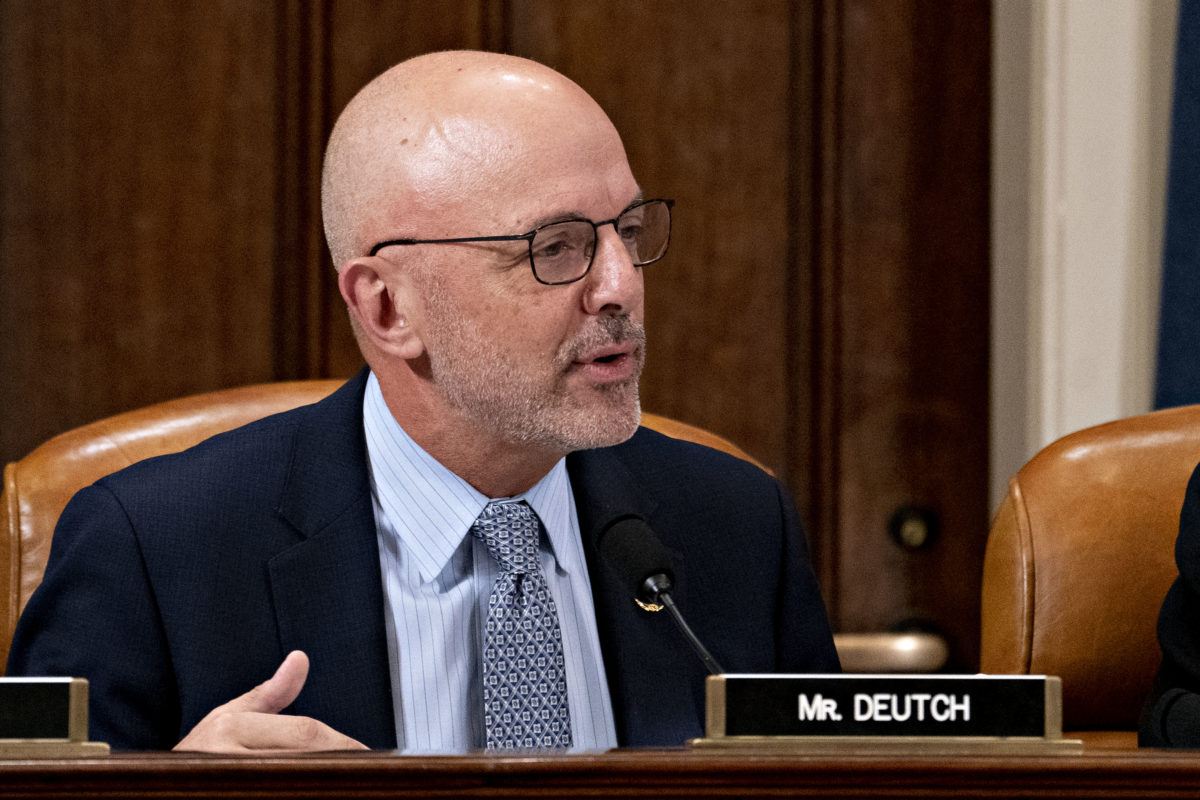 Rep. Ted Deutch (D-FL) linked comments by fellow members of Congress critical of Israel to recent incidents of antisemitic violence across the United States in remarks during an event with fellow Democratic Florida legislators on Thursday.

“If your position is that there’s no place for a Jewish state, there are people in the United States who hear that the entire state of Israel is some unacceptable creation…and all this is the fault of the Jews, then the antisemites take to the streets in New York and [Los Angeles], and then Boca [Raton] and Bal Harbour,” Deutch continued. “So of course there is a connection.”

The Florida congressman’s remarks appear to be a reference to positions expressed by Israel critics in the House, such as Rep. Rashida Tlaib (D-MI), who favors a one-state solution.

“When we have colleagues whose position is ‘Palestine from the river to the sea,’ which includes no place for a Jewish state, and when our colleagues…wrongly and falsely describe Israel as an apartheid state, there is a context for all of this,” Deutch said, referring to fellow House Democrats like Reps. Alexandria Ocasio-Cortez (D-NY) and Cori Bush (D-MO), who have called Israel an “apartheid” state.

“Attacks like that against Jews have led to antisemitism and expulsion, and violence around the world,” he continued.

In his own remarks, Greenblatt echoed Deutch.

“When you make unhinged claims and conspiratorial accusations that, for example, the Jewish state is systematically slaughtering children or intentionally committing genocide, don’t be surprised when unhinged people act on those conspiracies,” he said.

“Somehow when you attack people who are saying terrible things, you help them raise a lot of money,” Frankel explained.

Panelists at Thursday’s event repeatedly drew contrasts between how public figures have addressed recent surges in anti-Asian and antisemitic violence.

“There is no one who would say that… attacks [targeting Asian American and Pacific Islanders] are happening and we will condemn them independently, full stop, only when China stops the genocide against the Uyghurs, China stops violating human rights in Hong Kong, China stops considering the invasion of Taiwan,” Deutch argued. “There is likewise no reason that anyone should be able to say that there is some condition that needs to be met in Israel before we condemn antisemitism full-stop.”

Greenblatt added that he believes reactions to the recent spike in antisemitism — which has come in the wake of last month’s conflict between Israel and Hamas — have been muted compared to reactions to anti-Asian and other bigotry.

“I think it’s true that our community has not gotten the same clear, unequivocal, without conditions, rejection of this hate that we’ve seen… [for] the Muslim community, the AAPI community,” Greenblatt said.

Also during the event, Wasserman Schultz discussed her desire to regulate “algorithmic amplification” of extremist content by social media companies.

“This year demonstrated that social media companies simply cannot be relied upon to act fast enough or accurately enough to ban or block radicalized content, and we need legislation that holds large social media companies accountable for their algorithmic amplification of harmful radicalizing content that promotes offline opinion and activity,” Wasserman Schultz said.

“We need a 21st-century version of a law that allows for regulation when you have the online version of shouting fire in a crowded theater,” she continued.

Wasserman Schultz and Deutch are both cosponsors of the “Protecting Americans from Dangerous Algorithms Act,” which was introduced for the second time in March. That bill would amend Section 230 of the Communications Decency Act — which provides websites immunity from liability for content posted by their users — to make social media companies liable when their algorithms spread content “directly relevant” to a civil rights violation.

Wasserman Schultz also said that she and Deutch, in their roles on the World Jewish Congress’ International Council of Jewish Parliamentarians, are working with fellow lawmakers abroad to pursue similar efforts on a global scale.

“We are working with our parliamentary colleagues across the globe to, in each of our countries, come up with the best way to try to [regulate] these huge tech companies who are refusing to regulate this hate speech in a way that is going to short-circuit it,” she explained.

Wasserman Schultz also revealed that she’s working to found a Congressional Asian-Jewish Caucus, similar to the House Black-Jewish Caucus, which seeks to bring together lawmakers to raise awareness and combat bigotry.