in the name of the father

Eleven candidates are vying to succeed the elder Hastings, who died earlier this year 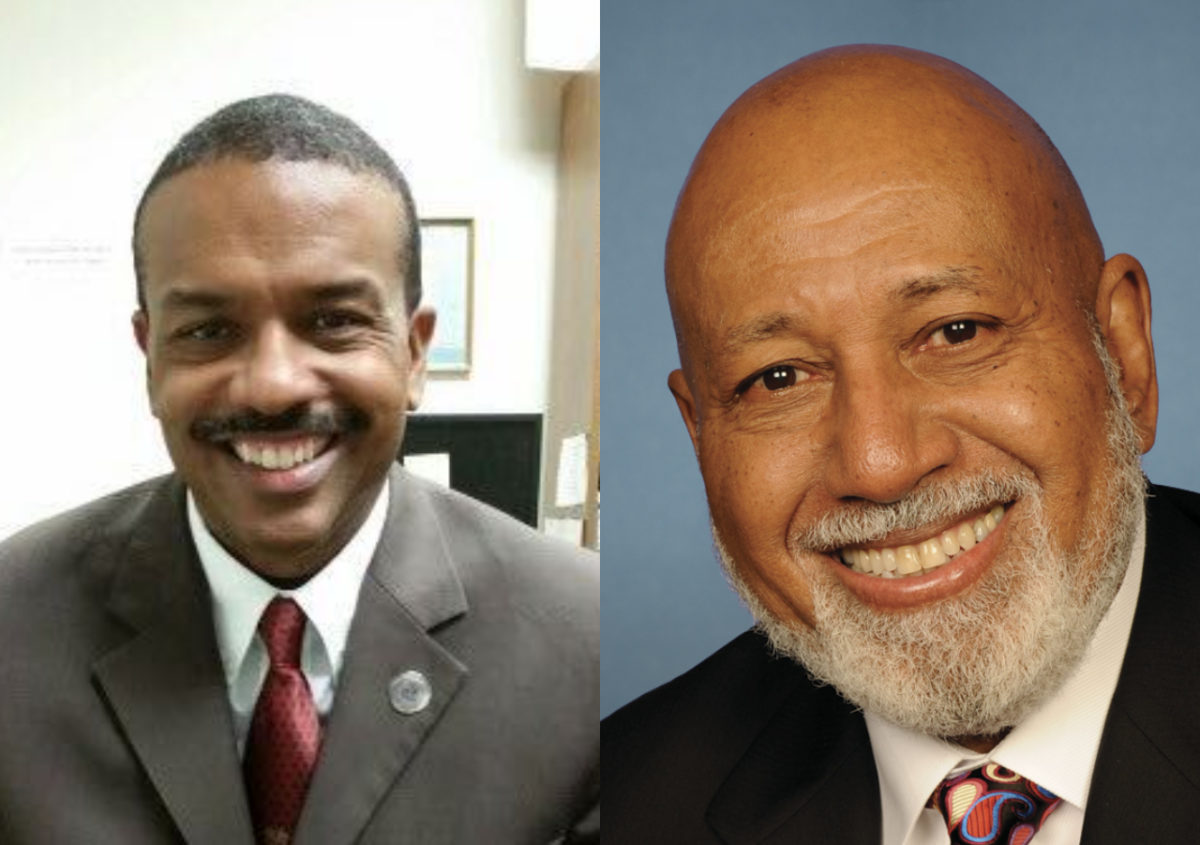 Alcee “Jody” Hastings II, the son of the late Rep. Alcee Hastings (D-FL), said in an interview on Tuesday that his father would be “highly disappointed at several of the candidates” now vying to succeed the former longtime dean of Florida’s congressional delegation in next week’s crowded special House primary.

But he singled out only one candidate by name. “Most importantly, the young man Omari Hardy, absolutely,” Hastings II told Jewish Insider, referring to the 31-year-old state representative from Palm Beach County, who is one of 11 candidates in the crowded field, describing him as “well out of his league to being a member of Congress at this point.”

Hastings took particular issue with Hardy’s critical stance on Israel, which includes his support for the Boycott, Divestment and Sanctions movement targeting the Jewish state. Hardy also favors withholding U.S. military assistance to Israel and stated his opposition to recent legislation that would provide Israel with $1 billion in supplemental aid for its Iron Dome missile-defense system.

Hardy’s views, first made public in an extensive interview with JI two weeks ago, have been controversial among Jewish community members in the district and elsewhere in South Florida. His positions are in stark contrast with the late congressman whose seat he hopes to fill.

Hastings, who died in April, was an outspoken supporter of Israel who visited the country an estimated 20 times over nearly three decades in the House. “Ultimately, my dad was pro-Israel all day long,” Hastings II remarked. “My dad believed in equal rights for all people,” he told JI. “He thought Israel was an oasis of democracy within a very difficult area of the Middle East.”

“He happened to be a very strong, outspoken critic when it came to anyone that voiced any kind of a displeasure or disconcern or anything that had to do against the people in Israel,” Hastings II added.

The congressman’s son, who works as the director of strategic partnerships and planning at Keiser University, expressed disbelief that Hardy is advocating in favor of policy positions that he suggested are a rebuke of his father’s legacy. “Just unbelievable,” he scoffed. Hastings II argued that the first-term lawmaker is “well out of his arena to understand the dynamic of what Congress is about and what the importance of Israel is to America as an ally.”

“I don’t think he has the capability of handling his job,” he said of Hardy.

Hardy, for his part, rejected that argument in an interview with JI on Tuesday night. “Everyone in this race has a healthy respect for Rep. Hastings, but none of us are running to be his clone,” he countered. “I understand some folks might want to speculate as to what Rep. Hastings would think about my support for human rights. I think it’s hard to tell what he would think, being as he and I have never had an opportunity to converse. I’ve never had an opportunity to explain to him my thoughts on the issue. So the speculation as to what he might believe about my position is just that: speculation.”

Even as he has doubled down on his views, Hardy said he has engaged in “many conversations” with members of the Jewish community about his position on Israel over the past two weeks, including a lengthy discussion with state Rep. Joseph Geller that he described as “deeply philosophical.”

“It was certainly a cordial exchange, but we did not agree,” said Geller, an Aventura Democrat who is supporting state Sen. Perry Thurston in the primary. “He understood my point of view and why I was uncomfortable with his point of view, and we’re going to talk about it more.” 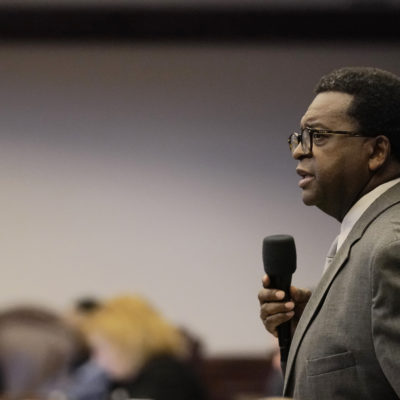 A former Florida House minority leader has his eye on Washington

Josephine Gon, the vice president of the Jewish Community Relations Council of Palm Beach County, has also spoken with Hardy since he went public with his support for BDS. She described the state representative as “polite” and “civil” if wholly unreceptive to her entreaties. “I said, ‘You’ve got to understand what you’re signing up with,’” she recalled telling him. “‘What does the movement you’re supporting actually mean?’”

Critics of BDS contend that the movement is antisemitic as it singles out the Jewish state. But Hardy dismisses such arguments, likening the cause to nonviolent resistance movements including the fight against South African apartheid and the Montgomery bus boycott coordinated by Martin Luther King, Jr.

Rabbi Mark Winer, the president of the Florida Democratic Party Jewish Caucus, agreed. “We had a lovely conversation,” he told JI. “I didn’t get anywhere with him.”

Winer said he laid out his case against BDS over a recent dinner at Ristorante Paradiso, Hardy’s favorite restaurant, in Lake Worth. “I emphasized to him that, as far as I’m concerned, personally, I’m not in favor of the settlement policies of Israel, but that Israel can hardly be called an apartheid state when every Palestinian citizen of Israel can vote,” he told JI.

Hardy was unconvinced, according to Winer. “He’s very locked in,” the rabbi said. “He’s very excited to be embracing the Palestinian cause. That’s where he is.”

Hardy confirmed that impression. “I enjoy hearing from people whose perspectives differ from mine, but when I have reasoned my way to a position, I find it difficult to change my mind unless someone can offer an argument that is persuasive,” he told JI on Tuesday.

Hardy said he would “continue to have open dialogue with members of the Jewish community” in South Florida. “Those are the kind of conversations that I find to be productive,” Hardy elaborated, taking a veiled jab at the younger Hastings. “Not speculation as to how this or that supposed authority would respond to my arguments.”

But the door may be closing. In a joint statement last week, Winer came out against Hardy’s candidacy, writing that he “does not follow in the footsteps of the late Alcee Hastings when he supports BDS and opposes Iron Dome.” The statement was also signed by Richard Stark, who chairs the Broward County Democratic Party Jewish Caucus, and Rachelle Litt, president of the Palm Beach County Democratic Party Jewish Caucus.

Jewish voters in the 20th Congressional District, which includes parts of Fort Lauderdale and West Palm Beach, have also been turned off by Hardy’s stance on Israel.

“I’m very angry with the Sun-Sentinel for endorsing him,” Sharon Jacobs, a 75-year-old retiree in Tamarac, griped in an interview with JI this week at Rob’s Bageland, a popular local diner as well as a frequent gathering spot for candidate meet-and-greets.

Norman Bykofsky, 82, said Hardy’s views had given him pause. “Not that a person can’t be against a policy of the Israeli government,” he told JI one recent morning at the diner. “We all have to fight for somebody’s right to be able to do that, and I don’t consider that antisemitic. By no means did I consider him antisemitic. But it was a negative.”

“It was a strong negative,” his tablemate chimed in.

“That was the end of him,” Len Ronik, 89 and a longtime resident of the Kings Point retirement community in Tamarac, said of Hardy’s support for BDS. “It’s the kiss of death.”

One exception is Burt Scholl, an 89-year-old retired public school administrator, who said he and his wife had voted for Hardy by mail two weeks ago. “Since then, of course, we’ve heard all these stories about his stance on Israel and his proposals about the BDS and to do something punitive,” he told JI. “That distresses us a little bit.”

Still, Scholl made clear that he didn’t “entirely” regret his vote — yet. “Omari stood out because the others were all, I think, pretty much the same stripe,” he said of the packed field. “They were standard Democrats, and I felt that this guy was young, perhaps innovative and more progressive in some of his views.”

Hardy, however, has struggled to capitalize on his position in the jam-packed primary, where several more established elected officials are competing for votes from overlapping bases. The Jewish community represents an estimated population of 41,000 and leans overwhelmingly Democratic but doesn’t appear to have coalesced behind a single candidate despite significant opposition to Hardy.

“When we try to make these races litmus tests on Israel, progressives tend to lose,” said a progressive strategist who believes Hardy’s candidacy represents something of a missed opportunity.

While Cherfilus-McCormick has personally loaned her campaign millions of dollars, Hardy has lagged in fundraising, pulling in around $172,000, likely discouraging national progressive groups such as Justice Democrats and the Working Families Party from getting involved, according to the progressive strategist.

The other top contenders in the race include Thurston, state Rep. Bobby Dubose and Broward County Commissioners Dale Holness and Barbara Sharief. The primary winner will be the prohibitive favorite in the Jan. 11 general election to represent the safely Democratic district.

Though Hastings had suggested that his father would have disapproved of a number of the candidates, he declined to reveal who else had in mind.

Hastings expressed a strong preference for Holness when the commissioner announced his candidacy last April. “It’s an honor for me, my late father, Alcee Hastings, and my family to stand here and support Broward County Commissioner Dale Holness to succeed my father as the next member of Congress for the 20th District,” Hastings said at the time.

But Hastings was reluctant to discuss the race in-depth and made no direct mention of Holness in the interview with JI.

Holness has claimed he earned an endorsement from Hastings before the congressman died last spring — an assertion his opponents have disputed because the elder Hastings, whom Holness describes as a “mentor,” never made an official announcement. Hastings II declined to comment when asked for clarification on the matter.

Several candidates in the race have boasted of their connections to the late congressman while vowing to uphold his legacy on Israel, even as Hardy has threatened to dismantle it.

“I hope that somebody fills the void,” Hastings said. “I hope that there is a candidate that is capable and competent enough to understand the dynamic of the pro-Israel relationship as it’s tied to the United States, and understand the importance of Israel that it plays on the world stage.”