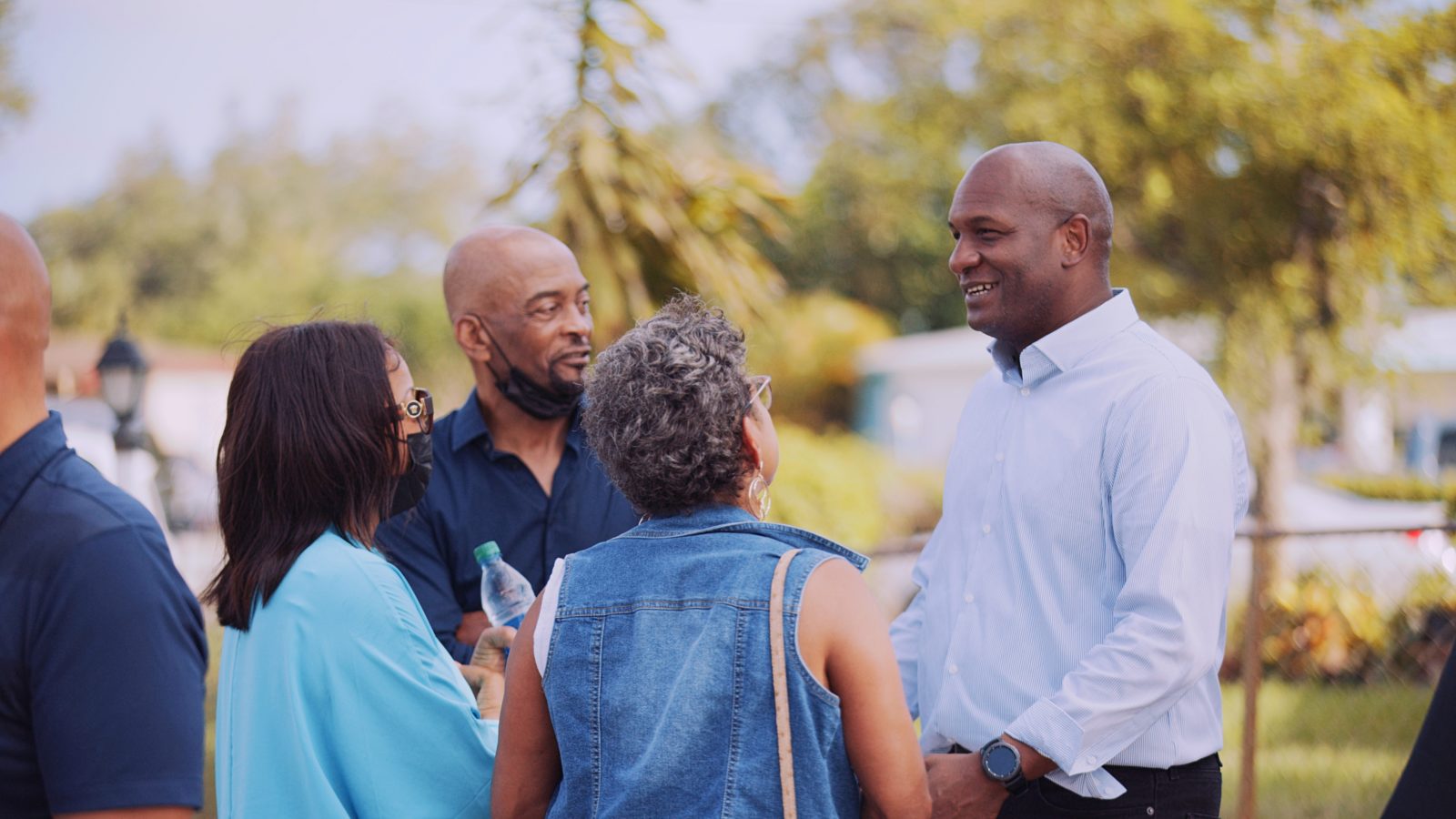 Bobby DuBose wants to bring his Tallahassee experience to D.C.

Bobby DuBose, a Florida state representative who serves as co-leader of the Democratic House minority caucus, believes his experience navigating a charged political climate this past legislative session sets him apart in the crowded special election to replace the late Rep. Alcee Hastings (D-FL).

“We had a very toxic session in Tallahassee that was very similar to D.C.,” DuBose, 50, told Jewish Insider in a recent interview, referring to a series of controversial Republican-backed efforts targeting protesters in Florida, as well as the state’s voting infrastructure that his party has decried as draconian. “But I was still able to pass key legislation.”

One bill he is particularly proud of, co-sponsored by Democratic state Sen. Lauren Book, prohibits harsh disciplinary tactics against students with disabilities, which DuBose hopes will be adopted at the federal level. Another law, which DuBose passed with Republican state Sen. Dennis Baxley, will create Florida’s first rare disease advisory council, hailed by proponents of the legislation as a crucial and long-overdue resource.

“They called us ‘the unlikely pair,’” DuBose said of his somewhat improbable partnership with a staunch conservative in the upper chamber.

The term-limited state lawmaker, who represents Fort Lauderdale, is optimistic that voters in Florida’s 20th Congressional District, which also includes West Palm Beach, will feel that his vision aligns even more broadly with their priorities as early voting begins on Saturday. The Nov. 2 primary is all but certain to indicate who will head to Congress next year because the district is heavily Democratic.

“Bobby has a history of working across the aisle to pass legislation that is important to his constituents,” said Justin Day, a Democratic strategist in Florida who has contributed to the DuBose campaign but is otherwise uninvolved in the race. “He doesn’t surrender his principles, but has an understanding of the legislative process, and the ability to build relationships that have led to his success.”

DuBose is one of five elected officeholders — including state Sen. Perry Thurston, state Rep. Omari Hardy and Broward County Commissioners Dale Holness and Barbara Sharief — whom experts are assessing as viable contenders in the race. Healthcare executive Sheila Cherfilus-McCormick is also aggressively vying for the seat, having spent $2.5 million of her own money on the race.

“Bobby DuBose is a proven vote-getter,” Joseph Geller, a state legislator in Aventura, told JI. “He’s a viable candidate who has a shot.”

While Holness has raised the most in outside contributions, pulling in $575,000, according to a spokesperson, DuBose has strongly positioned himself among the leading fundraisers in the field, garnering $227,000 as of June. A spokesperson for his campaign declined to provide an updated figure when asked by JI.

DuBose, a former Fort Lauderdale city commissioner and vice mayor who entered the race last April shortly after Hastings’s death at 84, said his top three priorities are healthcare, public school funding and criminal justice reform, a cause to which he has long been devoted as a life-long member of the NAACP.

That some of the civil rights group’s founders were Jewish, said DuBose, who is Black, has only deepened what he describes as a longstanding commitment to forging similar coalitions as an elected official. “Collectively, we’re still in this together, even in this modern-day America,” DuBose told JI. “I get it historically. I understand. We’ve always kind of acknowledged the connection and the relationship.”

He is well aware that Hastings was viewed as a stalwart in that regard, known for his close relationship with Jewish constituents, as well as being an outspoken voice against antisemitism. “He was someone who understood the Jewish community,” Ron Klein, a former Florida congressman who chairs the Jewish Democratic Council of America, said of Hastings, describing the late congressman as “unabashedly supportive of Israel.”

DuBose said he recognizes that Middle East foreign policy is a particularly salient issue among the sizable minority of Jewish community members who make up a population of 41,000 voters in the mostly Black 20th District, according to a recent report from the Jewish Electorate Institute.

“I don’t think they would have to worry about my stance,” DuBose told JI.

The congressional hopeful supports the continuation of U.S. military assistance provided to Israel through a 10-year memorandum of understanding and rejects calls to condition aid that have increased since the conflict last May between Israel and Hamas in Gaza.

In addition, DuBose said he agreed with the majority of House Democrats who voted in favor of sending Israel $1 billion to replenish its Iron Dome missile-defense system, despite resistance from an outspoken yet small faction of left-wing party members who objected to the measure.

He also opposes the Boycott, Divestment and Sanctions movement targeting Israel, characterizing the effort as “antisemitic” in a position paper. DuBose signed on to a House resolution condemning the movement in 2016, and, according to a candidate questionnaire solicited by JI, agrees with public efforts to divest from companies that engage in BDS, such as a recent effort in Florida that placed Ben & Jerry’s parent company, Unilever, on a list of “scrutinized companies that boycott Israel.”

“I recognize the need for a continued and strong commitment to Israel, including its right to exist and defend itself,” DuBose writes in his position paper. “In addition to strengthening relations, there is a need for dialogue between our nations as the issues are more than justice issues. Economic growth, technological advances and cultural exchange are equally important for the continuation of the strength of our commitment to Israel. The United States gets as much as it gives to Israel.”

The state legislator also advocates for expanding the Abraham Accords, the historic series of diplomatic agreements signed last year between Israel and several Arab nations in the region.

In the position paper, DuBose lauded the Biden administration’s ongoing effort to reenter the Iran nuclear deal, but cautioned against lifting sanctions “as a gift to open negotiations.” While Hastings opposed the deal in 2015, DuBose broadly pledged to continue the congressman’s legacy on foreign policy matters as they pertain to Israel.

“He was unapologetic about his stance on Israel and the unconditional friendship shared by our two nations,” DuBose writes of the former dean of Florida’s congressional delegation. “Although he will never be replaced, my desire is to have a similar reputation as it relates to being pro-Israel.”

DuBose has never visited Israel but hopes to do so if he is elected.

Recently, the Israeli-Palestinian conflict has become something of a hot topic in the 20th District race, following an interview with JI last week in which Hardy expressed his support for BDS, as well as conditioning aid to Israel over its treatment of the Palestinians. He also stated his firm opposition to additional Iron Dome funding, aligning himself with some of the most vocal anti-Israel critics in the House.

Hardy has faced pushback since going public with his views, not least because they represent a stark reversal from just a month prior, when he expressed broad support for Israel in a candidate forum hosted by the Broward County Democratic Party Jewish Caucus.

The editorial board of the Sun-Sentinel, which endorsed him earlier this month, criticized Hardy’s approach in a follow-up on Tuesday. The paper also published an opinion piece this week by a local rabbi who had castigated the progressive first-term lawmaker as “the Hitler of South Florida” before the epithet was summarily scrubbed because readers found the comparison offensive.

In a statement provided to JI on Wednesday, three prominent Jewish leaders in South Florida came out against Hardy because of his positions. “Omari Hardy does not follow in the footsteps of the late Alcee Hastings when he supports BDS and opposes Iron Dome,” they wrote. “One of the hallmarks of Congressman Hastings’s long career was his collaborative partnership with Florida’s Jews in supporting the survival of the State of Israel.”

DuBose, who works alongside Hardy in the state legislature, said he was perplexed by his colleague’s about-face with regard to Israel. “I don’t know what got him there,” he told JI. “I don’t know. I don’t know. Sometimes political winds cause people to do certain things. I really have no idea.”

Hardy doubled down in a virtual candidate forum hosted by the Jewish Democratic Council of America on Wednesday afternoon, even as Rep. Debbie Wasserman Schultz (D-FL), addressing viewers at the beginning of the discussion, put forth an implicit rebuke of Hardy’s stance on the issues. “Let me be clear, Democrats are united behind Israel,” she said. “Republicans try to politicize the U.S.-Israel relationship.”

Wasserman Schultz does not plan to make an endorsement in the race, according to a campaign spokesperson. Neither does Rep. Ted Deutch (D-FL), who also gave introductory remarks at the forum. Rep. Lois Frankel (D-FL), who completes the trio of Jewish Democratic House members in South Florida, endorsed Sharief earlier this month, citing the commissioner’s support for Israel in a statement to JI.

In July, DuBose notched an endorsement from Rep. Nikema Williams (D-GA), who is among a small handful of sitting House members from outside the state to have publicly weighed in on the race.

Throughout the forum, Hardy positioned himself as the lone Israel critic among the nine candidates who attended. All of the candidates except Hardy supported Iron Dome funding while rejecting BDS as well as calls to withhold U.S. aid to Israel. Thurston was not in attendance but echoed those views in a recent interview with JI. Siddiqui seems to have eschewed public engagement in the race despite qualifying for the primary.

At the end of the discussion, Hardy took a moment to address what he described as “the elephant in the room” while offering his concluding statement. “As an idealist, I must believe that there is nothing incompatible about supporting Israel’s right to exist and Israel’s right to defend itself and also supporting the inalienable right of the Palestinians, which are grounded not just in their humanity but also in international law,” said the first-term lawmaker.

His voice began to catch as he appeared to be fighting back tears.

“As a Black man, I have asked people who are not of color to stand with me and affirm that my life matters,” Hardy said, visibly shaken, “and what that means is that I cannot rail against a discriminatory criminal justice system in this country and ignore the fact that five to 700 Palestinian children are detained every year and prosecuted in military courts. I cannot not decry gentrification on Sistrunk and keep my mouth closed about settlements. I can’t talk about Flint, Mich., and keep my mouth closed about the fact that many Palestinians don’t have access to clean water.”

“I have love in my heart for everyone here, and I will maintain an open dialogue with the community,” he said. “Thank you.”

DuBose, for his part, was even-tempered in his sign-off. “I’ll keep my closing simple and just say Jewish people, people of color, Israel, we all have a lot in common,” he said. “Congressman Hastings understood that. Jewish people and antisemitism and racism — he understood that well, and so do I.”

In conversation with JI, the House Democratic leader acknowledged that foreign policy is “not something we really had to focus on at the state level,” but he said Hastings’s unwavering support for Israel had introduced him to a form of advocacy he is grateful to have witnessed. “It really opened my eyes.”

That awareness, coupled with his self-described record of legislative achievement in Tallahassee, is what DuBose suggested will propel him to a successful first term in Congress.

“I feel I’m battle-tested and ready to go on day one,” he told JI. “It’s good to scream and shout and fight real hard that way, but you’ve got to be able to produce and get things done.”