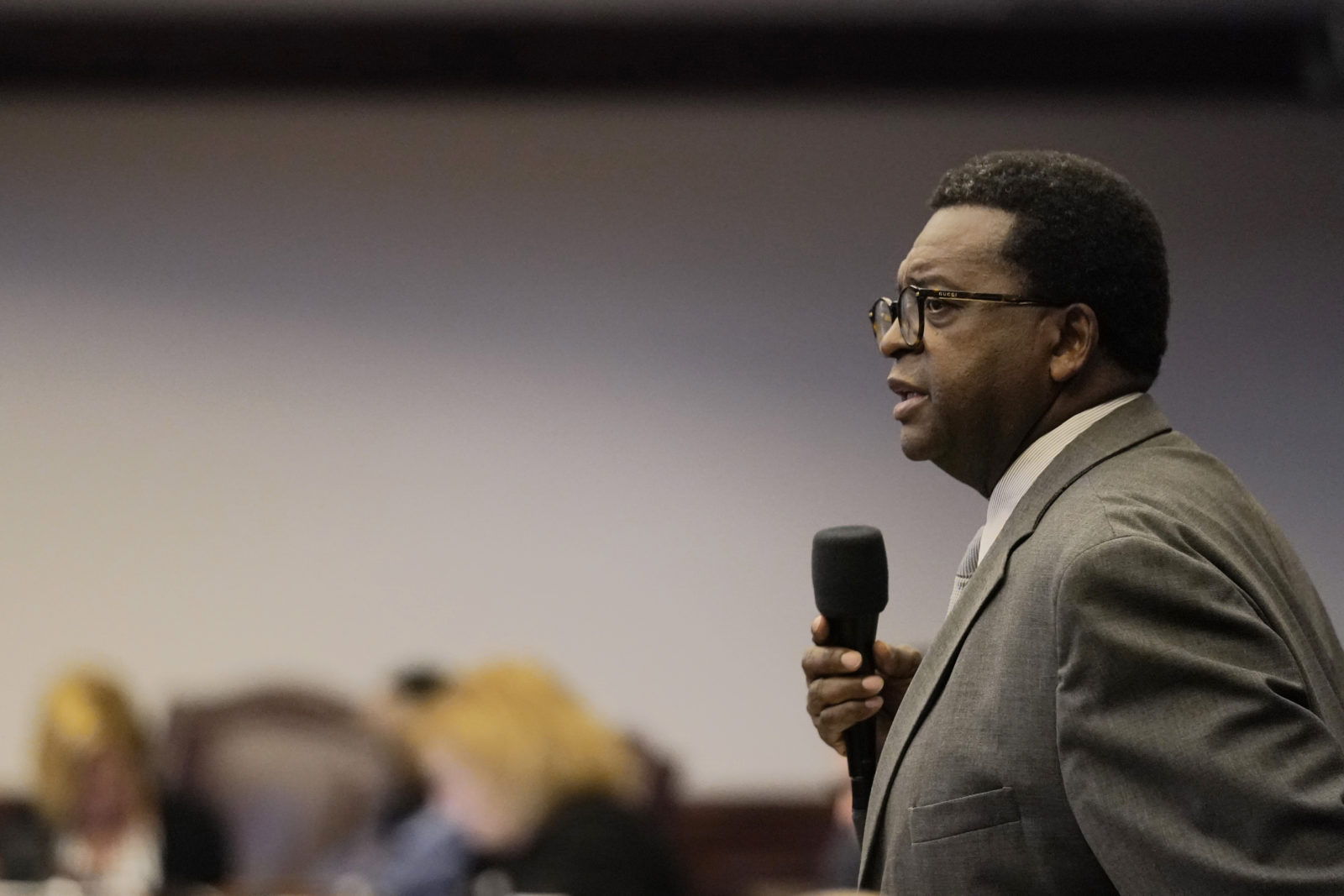 A former Florida House minority leader has his eye on Washington

Among the 11 candidates now jockeying for the seat, five elected officials at the state and local levels are counting on existing relationships with voters in the state’s 20th Congressional District, which includes Fort Lauderdale and West Palm Beach, to make them stand out.

Because turnout is expected to be lower than usual in the off-year election, scheduled for Nov. 2, the threshold for victory may come down to just a small percentage of votes, particularly as there is no frontrunner in the divided field.

“It’s really going to be who can get their base out,” said state Sen. Shevrin Jones, a Broward County Democrat, who is not publicly supporting anyone in the race.

Perry Thurston, a state senator from Lauderhill who previously served as minority leader during his final term in the Florida House of Representatives, is the only candidate in the race to have served in both legislative bodies. He argues that his 15 years in public office have positioned him for success.

“Quite frankly, I’m the most qualified candidate if you look at relevant past service and leadership,” Thurston, 60, told Jewish Insider last week. “I served in a body similar to what we’re looking at in D.C. But not only have I served in that capacity, I’ve led in that capacity.”

Thurston had been poised to take over as Senate minority leader next year, but he relinquished the position because Florida’s resign-to-run law required he give up his seat — as have the other elected officials in the race — in order to launch his campaign for Congress. He declared his candidacy shortly after Hastings’s death last April.

The senator’s pitch to voters echoes that of another contender with a similar background. State Rep. Bobby DuBose, the outgoing Democratic leader in the House, touts his experience navigating what he described to JI as a particularly “toxic” recent session in which he passed “key legislation.”

“I think Perry or Bobby both have an excellent chance to win this race,” said Justin Day, a Democratic strategist in Florida, who has contributed to the DuBose campaign but is otherwise uninvolved in the race. “While sitting members of the Florida legislature don’t tend to have high name ID, Bobby and Perry do have an advantage in that they have been on the ballot before.”

Moreover, he said, portions of their House or Senate Districts are, fortuitously, within the congressional district. “That should give them a leg up on their primary competitors,” Day told JI, adding that voters in the 20th District “have voted for Bobby and Perry before, and I would expect many of them to vote for one of them again.”

The other candidates who, by varying degrees, are viewed as viable include Barbara Sharief and Dale Holness, both of whom serve as Broward County commissioners. Omari Hardy, a first-term state representative from Fort Lauderdale, is something of a wild-card candidate, while Sheila Cherfilus-McCormick, a healthcare executive, is pouring millions of dollars of her own money into the race as she mounts her third bid for the seat.

The primary winner will be the prohibitive favorite in the general election on Jan. 11 because of the partisan makeup of the district.

In a primary battle that is “largely breaking down by geography,” as the think tank Data for Progress put it in a July poll that found a plurality of voters were undecided, Thurston may be better situated than the rest. He is the sole candidate in the race who represents Tamarac, a city in Broward County that is home to the massive Kings Point condominium complex whose approximately 9,000 residents — including the senator’s mother-in-law — have historically played a consequential role in determining election outcomes.

The complex, whose residents include a sizable and politically active Jewish community, sits in the 20th District. “Kings Point will play a disproportionate role,” said a former longtime Broward County Democratic Party chair who is not supporting anyone in the race.

“I think that they’re receptive,” Thurston said, assessing his standing among Jewish voters in Kings Point and elsewhere in the district, which is mostly Black.

Still, it remains to be seen whether the Jewish community — which represents a population of 41,000 eligible voters in the district, according to a recent report from the Jewish Electorate Institute — will coalesce around one particular candidate.

During his nearly three decades in office, Hastings developed a strong relationship with the Jewish community, not least because of his staunch support for the U.S.-Israel relationship.

Most candidates in the jam-packed primary have vowed to uphold Hastings’s legacy in that regard, if not others, which has made differentiating among the contenders something of a hazy proposition — at least on matters concerning Middle East foreign policy.

One exception is Hardy, who, in an interview with JI, recently expressed his support for the Boycott, Divestment and Sanctions movement targeting Israel and claimed that he would have voted against last month’s  $1 billion supplementary aid bill to replenish Israel’s Iron Dome missile-defense system. He also favors conditioning U.S. foreign aid to the Jewish state guaranteed in a memorandum of understanding between the two countries.

“I don’t agree with his approach,” Thurston said of Hardy’s positions. “I think that I’ve pretty much made it known what my approach is, and I haven’t had a similar evolution that he’s had.”

Thurston said he supports continued U.S. security assistance for Israel including the additional Iron Dome funding that is currently stalled in the Senate. He also rejects BDS.

“I am committed to Israeli security and believe that Israelis should live in safety and peace,” Thurston writes in an Israel position paper provided to JI by his campaign. “As an American, I am proud our government invested in Israel’s Iron Dome system, which has saved countless Israeli lives and is now deployed to protect our own U.S. service members. I believe Israel has a right to defend itself and that the United States must continue to help Israel retain its qualitative military edge.”

The congressional hopeful takes a somewhat more draconian approach to Iran than some of his competitors, despite expressing his support for the Biden administration as it seeks to renegotiate a new nuclear deal with Iran.

“Iran’s quest to develop nuclear weapons, its support of international terrorism and its threats to wipe Israel off the map cannot be tolerated,” Thurston said in a candidate questionnaire solicited by JI. “These threats must be addressed with the full force of the United States government. I support continued congressional efforts to place severe sanctions on the Iranian regime. However, while the United States has taken important steps against foreign governments and companies doing business in Iran, there is significant evidence that current efforts have been insufficient. We must punish any nation that helps Iran evade U.S. and international sanctions.”

The only candidate in the race who expressly opposes the 2015 Iran deal — which Hastings voted against in 2015 — is Dowling. “I do believe that it is a distinguishing factor from myself and all of the other candidates,” he told JI in an email.

But Thurston, who said he interned for Hastings early in his career, contends that he is best suited to carry forward Hastings’s legacy in Washington, D.C., even as Holness claims to have earned an endorsement from the congressman before he passed away. “I’m often asked about the big shoes that we have to fill, and with my leadership in the past, I often tell people I will be able to stand on Congressman Hastings’s shoulder, so I should do an even better job than the Congressman.”

On Israel, however, he acknowledged that Hastings was “the champion in the league.”

“He’s been the number one advocate of a strong U.S.-Israel relationship, and I would hope to continue that,” said Thurston. He has never visited Israel but said he intends to go. “Certainly, I would do everything I can to continue it.”

Thurston said he helped foster a close working relationship between the Black and Jewish caucuses during his time in the House, an effort he hopes to advance if he is elected. “When I see the antisemitism that’s going on in the country,” he elaborated, “I’m certainly reminded of the marches up there in Virginia, where they were talking about anti-Jewish, anti-Black rhetoric, and it just shows me that we need to stay together and work together.”

Thurston, a former criminal defense attorney, believes that prosecutors need to “ramp up the enforcement of hate crimes,” but argues more broadly in favor of using the bully pulpit to address rising incidents of bigotry. “Wherever the hate is occurring we’ve got to call it out for what it is,” he said. “That’s why it’s good for our communities to stick together, especially like communities with like problems.”

Thurston began his career in civil service working in the Broward County public defender’s office. He was a state representative from 2006 to 2014, where he established himself as a vocal advocate of Medicaid expansion, before being elected to the Senate.

He served as House minority leader between 2012 and 2014 and ran unsuccessfully for attorney general of Florida in 2014. Thurston has served in the Senate since 2016, a period he described as particularly treacherous for Democrats as they have battled with Republicans over issues like health care and voting rights.

“Our politics are divided like they are on a national level, and quite frankly, I think that I’ve been able to get a lot accomplished notwithstanding being in the minority party in the House and the Senate,” he said. “I think that type of leadership is missing when I see people like my good friend Congressman Hastings passing away.”