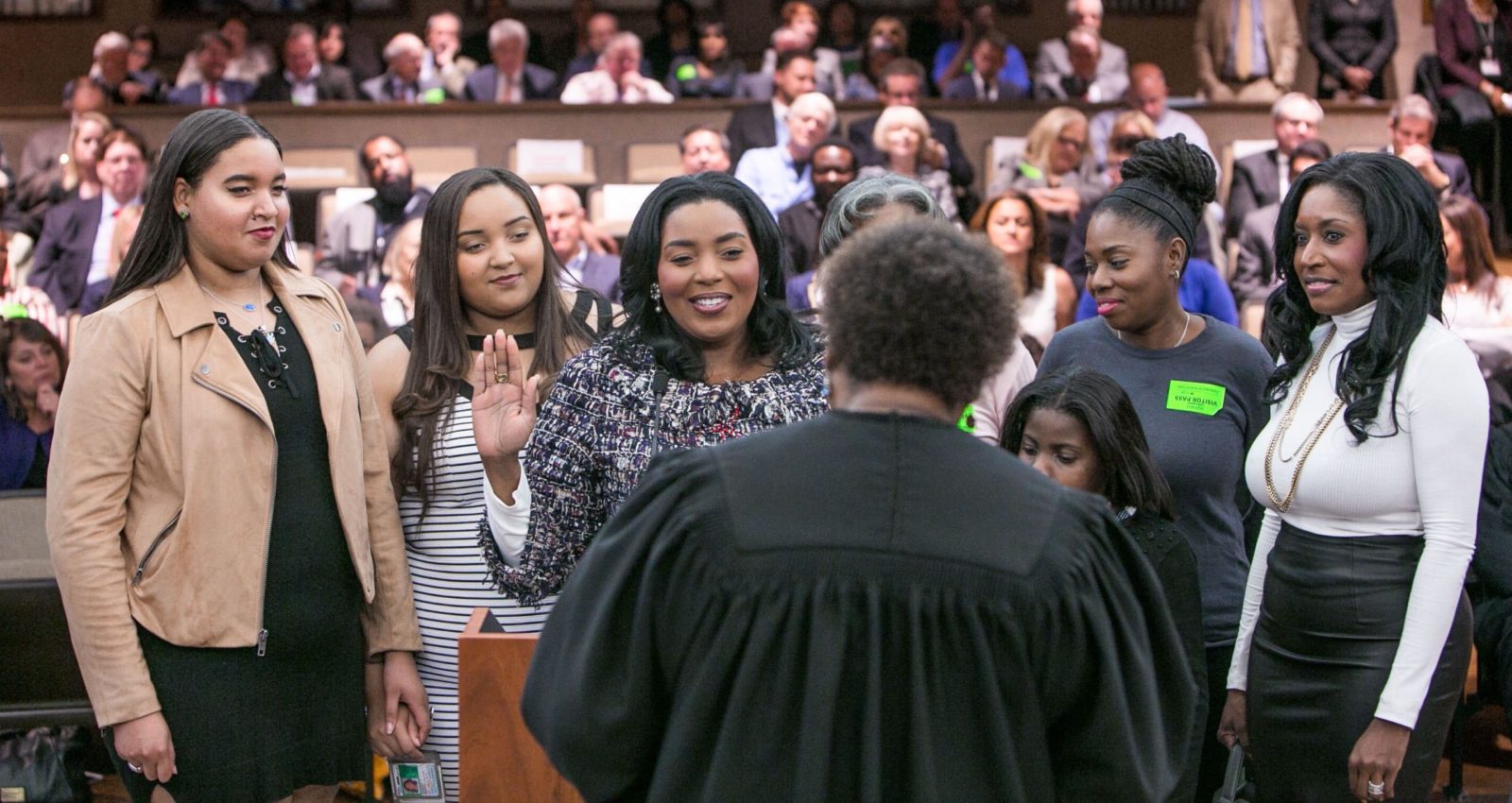 'I think people look at me and say, "Oh, my god, she's Muslim and she likes Israel,”' Barbara Sharief exclaimed

When Rep. Alcee Hastings (D-FL) died last April, the longest-serving member of Florida’s congressional delegation was widely remembered for his passionate commitment to strengthening the U.S.-Israel relationship while fostering meaningful ties between the Black and Jewish communities.

With 11 Democratic candidates now vying to fill his seat in South Florida’s wide-open special House primary, scheduled for Nov. 2, the question of who, if anyone, will advance Hastings’s legacy on Jewish issues remains unanswered, even as a number of contenders have claimed commonalities with the late congressman.

“Whoever emerges or whoever wins,” said Shevrin Jones, a Democratic state legislator in Broward County who is not publicly supporting anyone in the race, “it’s my hope that their view on the U.S.-Israel relationship is consistent with Congressman Hastings.”

At least one candidate seems eager to boost her credentials among Jewish community leaders and pro-Israel advocates who have struggled to parse the crowded race, where no single frontrunner has yet to emerge. Barbara Sharief, a Black Muslim commissioner in Broward County, casts herself as a staunch supporter of the Jewish state, a position she describes simply as “common sense.”

“I think people look at me and say, ‘Oh, my god, she’s Muslim and she likes Israel,’” Sharief, who is 49, said in an interview with Jewish Insider on Wednesday. But such insinuations, she suggested, are not only offensive but ultimately misguided. “Israel has something that we have to protect.”

Sharief recalled traveling through Israel two years ago on an AIPAC-sponsored African-American leadership tour, an experience — which included meetings with Palestinians — she credits largely with influencing her ongoing concern for Israel’s stability. “When I finished my nine days there, what I realized was that Israel was under constant attack,” she explained. “That was one of the reasons why I came back and said, ‘I support the aid to Israel continuously.’”

“When she came back from Israel, she shared a lot of the same feelings that I have,” said Ilene Lieberman Michelson, a retired lawyer and pro-Israel advocate in Fort Lauderdale who previously served with Sharief on the Broward County Commission. “I know it affected her.”

Sharief — the only candidate in the crowded race whose campaign site thus far includes an issues section exclusively touting her “support for Israel” — argues strongly in favor of maintaining annual U.S. military assistance for the Jewish state. She also supports legislation that would provide Israel with $1 billion in supplemental aid to replenish its Iron Dome missile-defense system after the May conflict with Hamas. The bill is now stalled in the Senate following a House vote during which eight Democrats and one Republican opposed the measure while 420 members supported it.

Without such aid, “the Middle East will become destabilized very quickly,” Sharief said. “That represents a threat for America, and I don’t think people get that.”

“The trip did me good in terms of just giving me a different level of understanding of what was going on,” Sharief told JI.

Her foreign policy message appears to be resonating, at least combined with an array of center-left domestic proposals, as she consolidates endorsements, including two this week from Reps. Cheri Bustos (D-IL) and Lois Frankel (D-FL).

“Sharief is the right woman for the job across a range of issues — she’s a fierce advocate for protecting voting rights, expanding healthcare coverage, advocating for the middle class, and, yes, advancing a strong U.S.-Israel relationship,” Frankel said in a statement to JI. “That’s what folks in South Florida want and what the American people want — because they know that support for Israel supports America by advancing our values and our security.”

Despite such recognition, polling has demonstrated that the primary is still somewhat in flux and will likely remain so when early voting begins next week. “It will be a very tough race to predict because there are so many qualified candidates running,” said Steve Tauber, a professor of political science at the University of South Florida.

Most of the candidates have expressed varying levels of support for Israel, according to Richard Stark, who chairs the Broward County Democratic Party Jewish Caucus and co-hosted a candidate forum last month. But an outlier is Hardy, who has recently changed course.

In an interview with JI this week, he came out in favor of the controversial Boycott, Divestment and Sanctions movement targeting Israel. Hardy also called for conditioning aid to the Jewish state and said he was against the supplemental Iron Dome funding bill.

However, Sharief vehemently objected to Hardy’s recent comments, charging that his views betray a lack of experience “when it comes to understanding the geopolitics and the dynamics” in the region. She suggested that Hardy had only changed his stance in an effort to court support from the progressive left, though he insists his evolution is authentic.

“For me, I am a Muslim-born woman, and I have a completely different opinion,” Sharief said. “BDS, you see, is never going to be successful, number one, because Hitler tried that on the Jews in 1933 and it didn’t work very well. So why is that concept, when we know how horrible it is, still being proffered today? I think it’s wrong.”

Sharief, a former Broward County mayor, announced a primary challenge against Hastings last December, but since the congressman’s death a number of additional candidates have jumped into the race. Florida’s 20th Congressional District, which includes Fort Lauderdale and West Palm Beach, is majority-Black but includes a robust Jewish community in Tamarac.

“I’m going to be a congresswoman that represents a diverse community,” she said, “and I have to be able to listen to both sides and make an informed decision.”

For her part, Sharief added her belief that calls to further condition aid are ultimately unhelpful in engendering the conditions that could lead to a two-state solution to the Israeli-Palestinian conflict. “We already know that the bombs are flying, and we know that they’ve been going on for hundreds of years,” she said. “What we have to do as Americans is provide the aid, keep the Middle East stable and then try to get these people to the table to create a peace treaty and a two-state solution.”

In a position paper provided to JI by her campaign, Sharief clarifies her views on a number of Middle East foreign policy issues, including her belief that the U.S. embassy should remain in Jerusalem. She is also in favor of strengthening the Abraham Accords, a series of normalization agreements between Israel and several Arab nations brokered by the Trump administration, and supports a return to the Iran nuclear deal negotiated by the Obama administration.

“I will work with our strategic partners around the globe to make sure Iran remains in check and does not acquire or develop nuclear weapons,” she writes in the paper. “I support tough economic sanctions as a way to curb Iran’s bad behavior and use as leverage to bring them back to the negotiating table for a better deal.”

No single candidate appears to have locked up the Jewish community’s vote, which could prove decisive in what is expected to be a low-turnout election, though Sharief has established “decent ties to the Jewish community,” according to Stark. Sharief said she has campaigned at Kings Point, a condominium complex in the district that is home to a sizable Jewish community. “I’ve probably visited every club that they have out there,” she told JI. “They’re very interested voters.”

The Broward County native, a medical professional who founded a pediatric home healthcare company, has loaned her campaign $230,000 of her own money, according to the latest filings from the Federal Election Commission. She had pulled in just $67,000 in outside contributions as of the last quarterly filing deadline. New fundraising numbers, to be released on Friday, will indicate whether she has gained more meaningful support over the past few months.

She argued that several candidates in the race “are trying to imitate” Hastings, whose legacy she describes as “invaluable.” But while her goals, particularly with regard to Israel and fostering strong Jewish community connections, echo those of the late congressman, Sharief suggested that she had arrived at them not entirely out of fealty to Hastings — whom she once intended to unseat — but because of personal conviction.

“I want to be as supportive as I can with Israel,” she concluded, “and I want to continue to educate our African-American community about the importance of that relationship.”