At tonight’s debate, candidates will once again take aim at frontrunner Biden 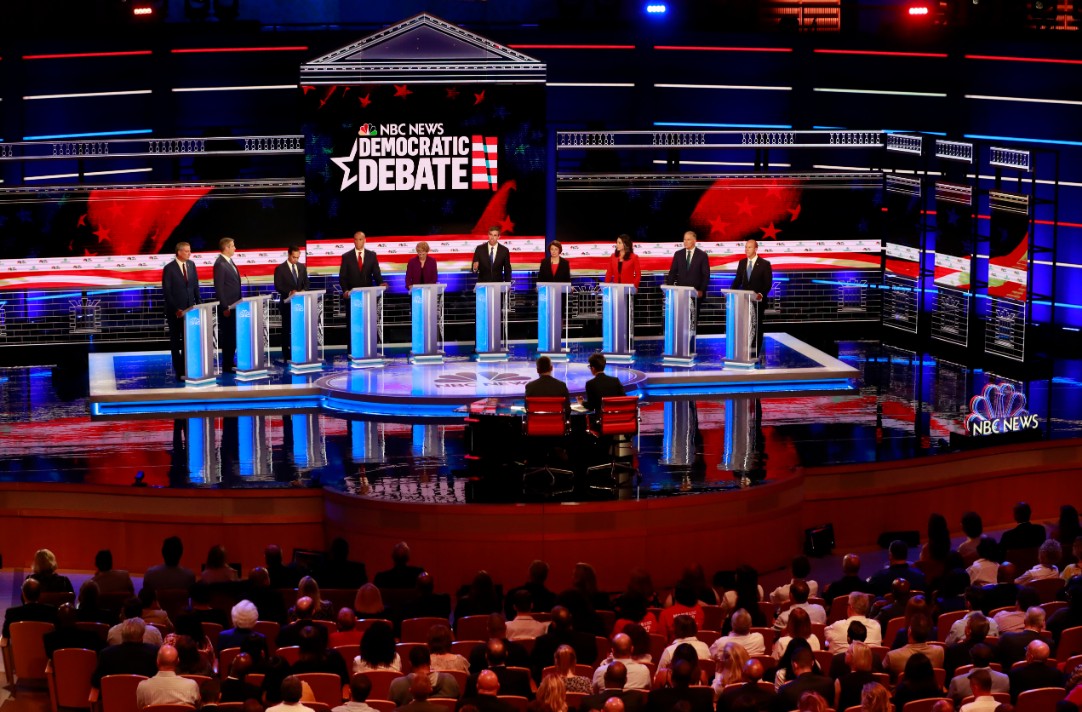 Democratic presidential candidates listen to a question during the Democratic primary debate hosted by NBC News at the Adrienne Arsht Center for the Performing Arts, Wednesday, June 26, 2019, in Miami.

HOUSTON — At long last, the Democratic presidential primary debate is scheduled to be just a one-night affair. But with 10 candidates taking the stage in Houston for three full hours, it may seem much longer to viewers.

The criteria imposed by the Democratic National Committee have thinned the herd for the third debate. A number of candidates with serious resumes — including a purple-state senator, a red-state governor and the mayor of the largest city in the nation — will not be on stage. But, finally, all of the top-tier candidates will be together in one room, instead of spread out over two nights during the first two debates.

Tonight the leading candidate, former Vice President Joe Biden, will take the stage flanked by his two strongest rivals, Senators Elizabeth Warren (D-MA) and Bernie Sanders (I-VT). The three top-tier candidates will be joined by South Bend, Indiana Mayor Pete Buttigieg and Senator Kamala Harris (D-CA) at center stage, bringing together the five candidates who have consistently polled above the five percent mark since the spring.

Further out, businessman Andrew Yang, who has mounted an astonishing campaign to achieve national relevance, will appear along with two candidates formerly hyped as potential front-runners, Senator Cory Booker (D-NJ) and former Congressman Beto O’Rourke (D-TX). At the far edges of the stage, former HUD secretary Julian Castro and Senator Amy Klobuchar (D-MN) will vie for the moderators’ attention.

Will the debate’s contours change now that many of the lower-tier candidates have been weeded out? The first two debates featured moderate candidates who polled at roughly the margin of error taking wild jabs at leading contenders. But the moderate at the edge of the stage in this debate isn’t former governor John Hickenlooper or former Congressman John Delaney (D-MD) — it’s Klobuchar, a three-term senator who is still in a far stronger position than either of those two candidates were over the summer.

Some things, however, will stay the same. Biden will remain at center stage and still have a target on his back. Although the former vice president has been bloodied in past debates — most notably when Kamala Harris attacked his past opposition to busing — he has not sustained any lasting damage. The question for those seeking to take him down is whether the third debate will finally be the charm.