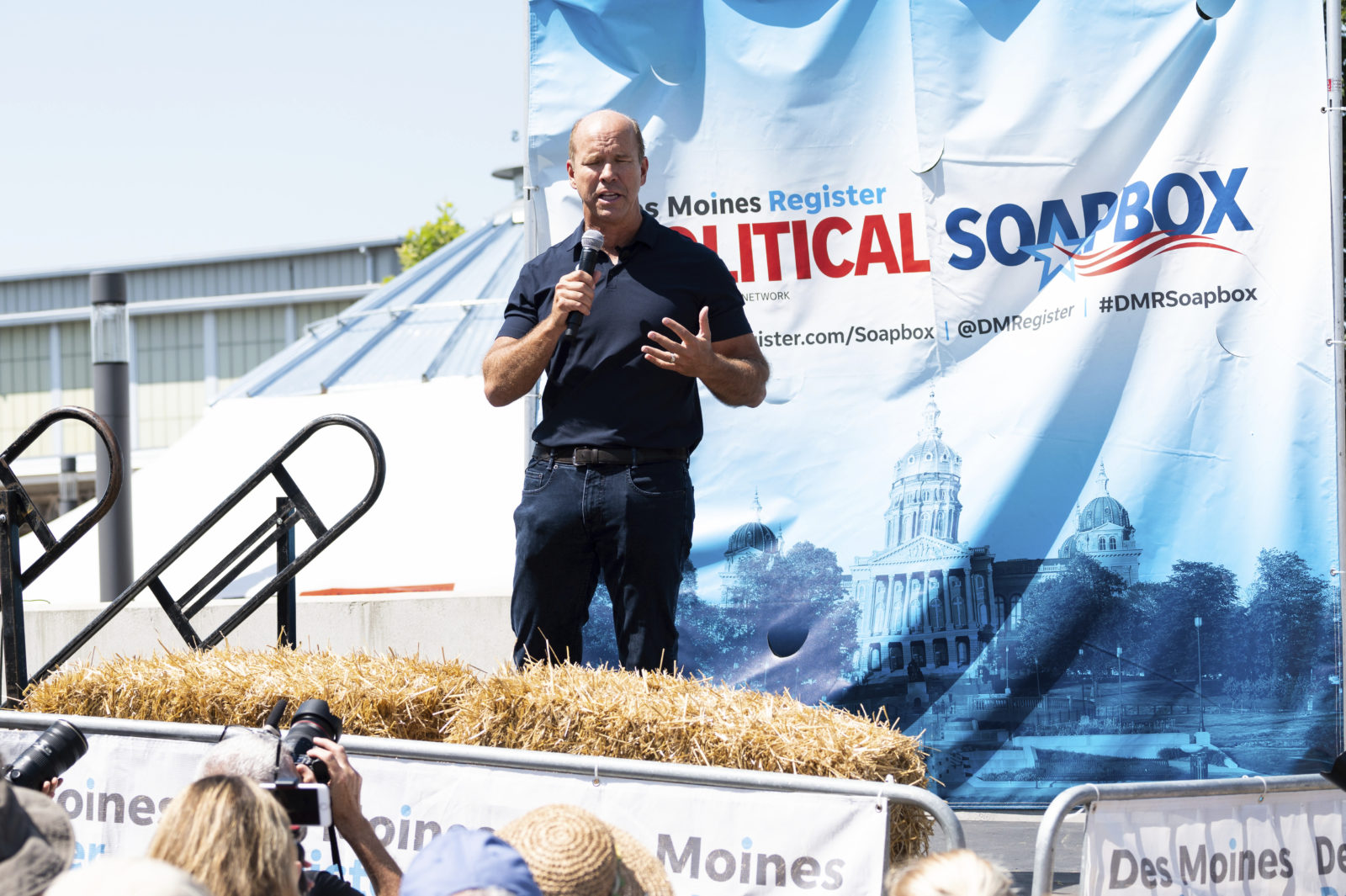 John Delaney: When others drop out of the 2020 race, I will shine

‘There seems to be a bit of an obsession with criticizing Israel right now in the Democratic Party,’ said the former Maryland congressman

Des Moines, Iowa — John Delaney is ready for his moment. The former Maryland congressman believes “the field is probably going to shrink soon, and that’s going to be a good moment” for his campaign. Once those who are running “thematically similar campaigns” drop out, he said, he’ll be able to take advantage.

Delaney has been running for president for more than two years. He’s spent millions of dollars of his personal fortune and repeatedly crisscrossed the state of Iowa — and is polling below the margin of error.

This process has left Delaney with frustrations about the 2020 primary. “We have several people running for president and they’ve never done any public service in their life,” Delaney told Jewish Insider in a recent interview. “Never served in office. Which is what our current president has. That’s crazy. And the American people should reject that out of hand. But they’re not.”

Delaney is particularly concerned that “the social media primary” has become the first contest of 2020. The Maryland Democrat argued “historically you had the Iowa caucuses first and the New Hampshire primary second. And those were vetting processes. That didn’t determine the president, but they told the American people: ‘We’ve kicked the tires on those individuals as human beings. And we’ve decided that these couple of people are really worthy of your serious consideration based on sitting down with them person to person.’”

For the 2020 race, the Democratic National Committee (DNC) set a polling and fundraising threshold to participate in the televised debates. For the next round of debates, candidates need to hit 2% in four different polls and reach 130,000 unique campaign donors. The latter threshold has irked a number of candidates, who have been forced to spend up to $70 in prospecting for a single new donor.

Delaney, who has self-financed his campaign, sees the DNC as an accomplice in the creation of the social media primary he believes forces candidates to “play to the audience” of Democrats who donate to campaigns online. “I think that’s dangerous because I think it degrades the seriousness of politics,” he said. He further argued that online donors are “a relatively small percentage of the population” who are mostly from California and New York and “by and large are fairly well off.”

The Democratic presidential hopeful also expressed his befuddlement with many prominent members of his party who have gone out of their way to criticize Israel.

“I don’t understand what’s going on in the Democratic Party because there’s a lot of bad actors around the world,” said Delaney. “I don’t understand why we become so preoccupied with what a very good ally of ours is doing… Israel is a very, very strong ally of the United States — one of our strongest, not just in the Middle East, but anywhere in the world. We share a lot of things with them, including a set of values.

“Can you criticize your friends? Of course,” Delaney continued. “You know that. But there seems to be a bit of an obsession with criticizing Israel right now in the Democratic Party and there’s a lot of other more questionable actors and bad actors obviously around the world that deserve our attention.”

Delaney also broke with a number of other Democratic candidates, including former Texas Rep. Beto O’Rourke and Senator Bernie Sanders (I-VT), when he demurred from labeling Israeli Prime Minister Benjamin Netanyahu “a racist.”

“I’m not a big fan but, at this point I don’t follow his speeches and his sayings every day to make that kind of an accusation about him,” he said. “I don’t think it’s constructive to spend a lot of time beating up on the leader of a very important ally.”

The former congressman said he would continue to recognize Israeli sovereignty over the Golan Heights, a decision made by President Donald Trump earlier this year. However, Delaney would have preferred the decision had been part of a broader negotiated peace process between Israel and the Palestinians, rather than a unilateral decision.

“I’ve been to the Golan. I don’t believe that should go back to Syria, which at this moment in time, I mean that’s a crazy idea,” said Delaney. “I don’t know why would we want… to give anything to Syria at this point.”

On other foreign policy challenges facing the United States, the former three-term congressman said “trade policy is foreign policy” and insisted once again that only a candidate who supports reentering the Trans-Pacific Partnership can beat Donald Trump. In contrast, he scorned Senator Elizabeth Warren’s (D-MA) trade policy, describing it as “the Medicare for all of trade policy,” comparing it to the universal healthcare that he has repeatedly attacked on the stump and in debates.

Delaney also weighed in on Brexit, ahead of the United Kingdom’s looming “no deal” withdrawal from the European Union at the end of October. “I thought Brexit was a bad decision,” said Delaney. “You know personally I’d love to have a second referendum. But in many ways that doesn’t work.”

Instead, he said, “my view is let them do their Brexit, let them do it as hard as they want. And if it doesn’t work they’ll get back in [the European Union]… I actually kind of agree with Boris Johnson on this point which, as you know the decision was made by the people, that they gotta do it and then if it doesn’t work, you’ll fix that problem.”

Despite his pledge to work on only bipartisan issues in his first 100 days in office, Delaney said bipartisan agreement “has not been possible” on gun control. “I’m not naive to think that the NRA is not going to continue to be an insidious force bending the will of government away from the needs of the people,” said the moderate Marylander. “That’s what I believe they do. You get 90 percent [of] America supporting something and then the NRA buys off members [of Congress]. And we can’t get it done.” However, Delaney insisted that bipartisan agreement was possible on issues like fixing the Affordable Care Act, immigration reform and combating climate change.

Looking forward, Delaney conceded that his campaign was “an Iowa bet.” He explained: “I’ve spent a lot of time in Iowa and invested heavily in Iowa. And to me the only poll that matters is how I do [in] the Iowa caucus. I said that if I don’t do well in the Iowa caucus, there’s obviously won’t be a lot of momentum for the campaign.”

In the meantime, Delaney said his two years on the trail have “been fun. It’s a tough slog but listen, I’m in no position to complain about anything in my life. I think it’s an amazing privilege to be able to try to live a meaningful life and make a difference in the lives of people.” After all, he added, “it’s my third time at the Iowa fair, who can complain?”