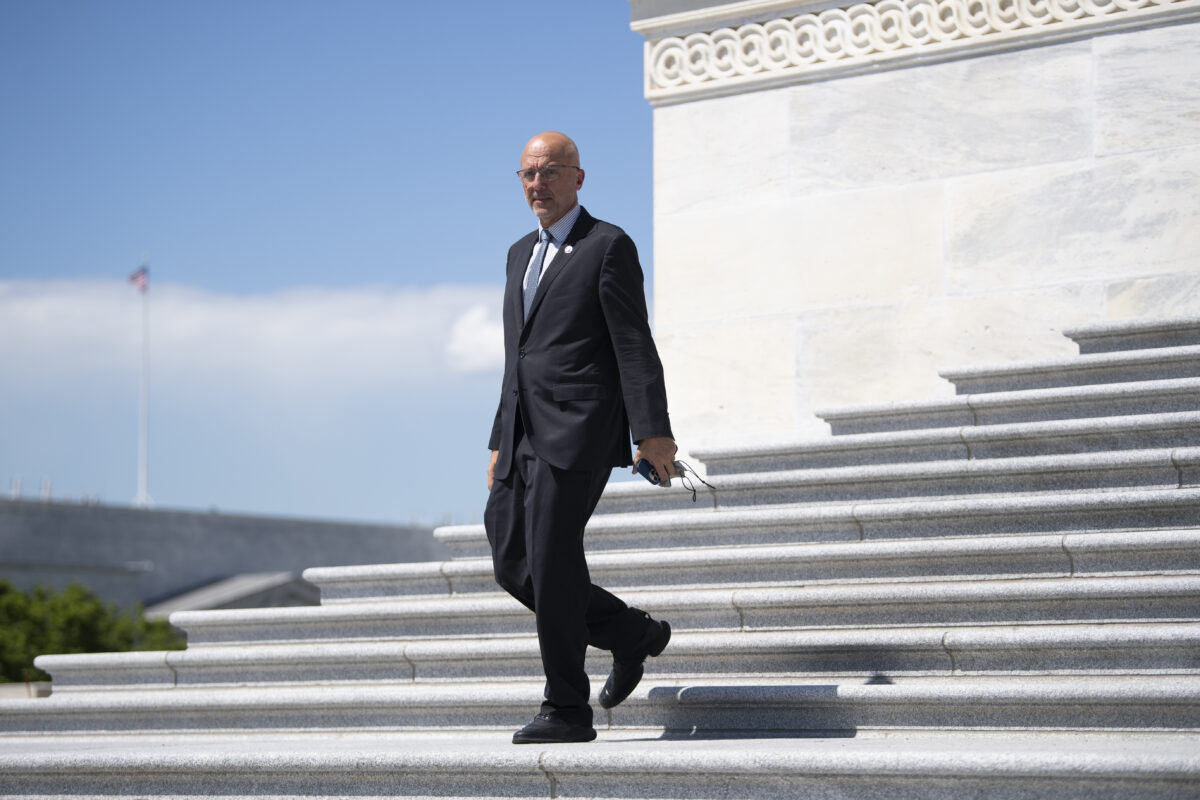 Rep. Ted Deutch (D-FL), walks down the House steps of the Capitol after a vote in Washington on Friday, May 14, 2021.

In a tearful speech on the House floor on Wednesday, outgoing Rep. Ted Deutch (D-FL) — who has been a prominent advocate within the House for the Jewish and pro-Israel communities, and has pushed back forcefully against anti-Israel sentiment in his own party — traced his service in Congress back to his roots in the Jewish community and his father’s service in World War II.

Deutch, 56, is retiring at the end of the month to lead the American Jewish Committee. On Wednesday, he led his final hearing as the chairman of the House Foreign Affairs Committee’s Middle East subcommittee, where he gave some final recommendations to his colleagues on the direction of Middle East policy.

He touted the range of issues he’s worked on in the Jewish community as a member of Congress, including founding the House’s bipartisan antisemitism task force, leading the Middle East subcommittee, championing the U.S.-Israel relationship, pushing for Iron Dome funding and supporting Holocaust survivors.

“My colleagues and constituents know me as a proud Jewish member of the American Congress,” Deutch said. “My involvement in the community, my travel to Israel, those have been such a fundamental part of what I’ve done since I’ve been here.”

The outgoing subcommittee chair gave specific recommendations for how his colleagues should approach a nuclear deal — “support for any deal must, at minimum, depend on satisfactory answers” to three questions: what the path is from a renewed JCPOA to a broader and permanent agreement; whether the benefits of the deal outweigh the risks to Israel and U.S. partners and proxies from increased funding for terrorism; and what the U.S. and its allies’ plans are today to stop Iran’s nuclear program with or without a deal.

He also said he has “concerns about how any nuclear deal can be verifiable and enforceable,” given Iran’s moves to obstruct International Atomic Energy Agency investigations. He further noted that Iran has no inherent right to enrich uranium and is now enriching uranium at 60% — well above the level needed for civilian nuclear energy — “without seemingly any repercussions.”

Aspirations for increased Middle East defensive cooperation have gained popularity both on Capitol Hill and in the Defense Department. The expert witnesses who testified before the committee — former U.S. Ambassador to Israel Dan Shapiro, former Deputy Assistant Secretary of Defense for the Middle East Andrew Exum, former Assistant Secretary of State for Near Eastern Affairs David Schenker and Linda Robinson, former director of the Center for Middle East Public Policy at RAND Corporation — highlighted a series of potential obstacles to those dreams in their testimony.

Exum also cautioned euphemistically that an inevitable risk of fostering military ties among Arab states and Israel is that they could “head off in more, shall we say, entrepreneurial directions” than the U.S. might prefer. Schenker added that the proposed air-defense infrastructure would not be an effective counter to a nuclear-threshold Iran.

Looking further into the future, should defense cooperation progress, panelists offered their visions of what a broader Middle East security and cooperation architecture could look like — downplaying the chances of a NATO-style alliance in the region. Shapiro suggested that the Association of Southeast Nations (ASEAN) model could be a long-term goal, while Robinson and Exum suggested a model based on the Organization for Security and Cooperation in Europe, addressing issues like the Palestinians in addition to defense matters.

Nearly all of the subcommittee members offered praise for Deutch during their own remarks, and many said they expect to continue to work closely with him in his new role at AJC.

Rep. David Cicilline (D-RI), who has expressed interest in replacing Deutch as subcommittee chair, told him, “You are one of the two people that I look to when I have difficult votes on the House floor as sort of my North Star.”

Schneider, another competitor for the spot, is a close ally of Deutch on Middle East policy issues.

He said Deutch had been “an extraordinary friend and mentor… Your outstanding leadership has been demonstrated with your vision, passion and wisdom, and we are going to sorely miss you.”

Disclosure: Deutch is the father of Jewish Insider reporter Gabby Deutch. Gabby Deutch was not involved in the reporting of this story.