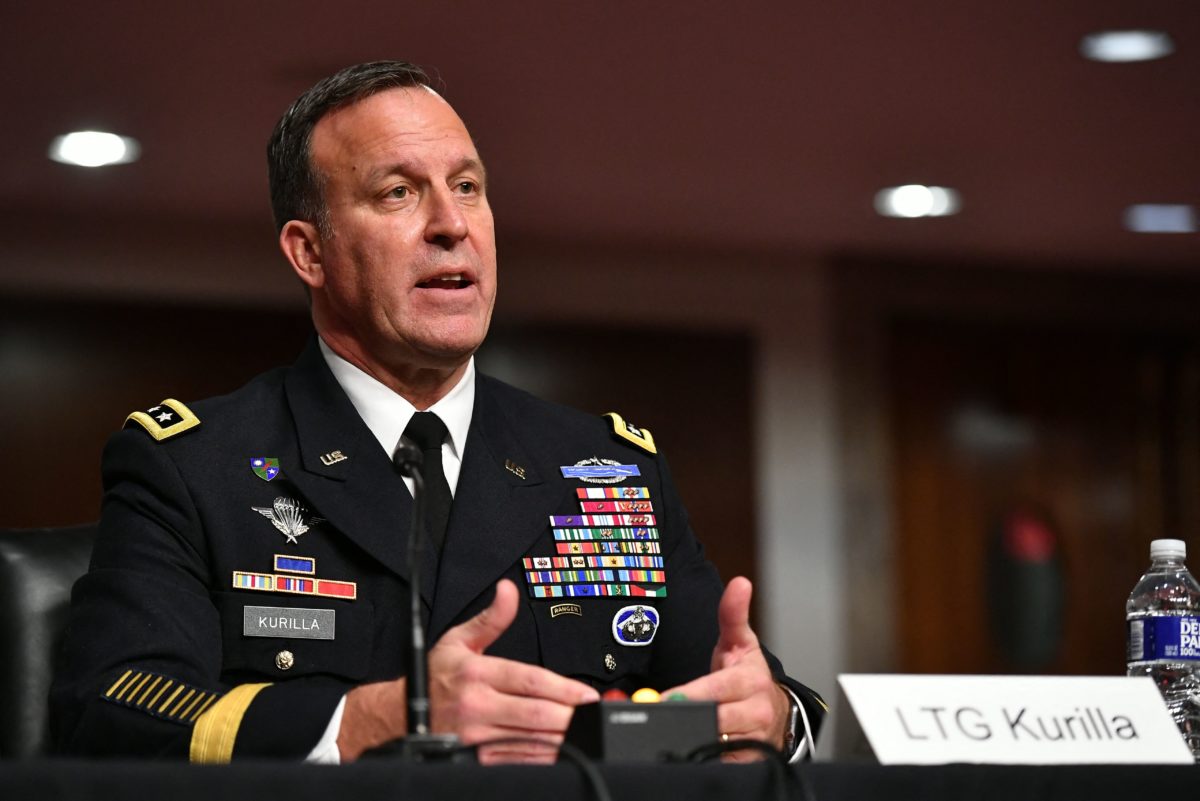 US Army Lieutenant General Michael Kurilla testifies before the Senate Armed Services Committee on his nomination to the next commander of the US Central Command.

Lt. Gen. Michael Kurilla, the nominee to lead U.S. Central Command (CENTCOM), warned about Iranian threats and discussed options for increasing cooperation between the U.S., Arab nations and Israel at his confirmation hearing on Tuesday.

Kurilla, testifying before the Senate Armed Services Committee, called Iran “the number one destabilizing factor in the Middle East with their malign behavior,” and called for an “enforceable agreement” ensuring that Iran does not obtain a nuclear weapon as the Biden administration engages in talks in Vienna over a possible return to the 2015 nuclear deal.

He also acknowledged “a risk” that sanctions relief through a potential deal could be used to support proxy and terrorist groups that target U.S. forces in the region. The Army officer added that he’s found that exposing Iran’s support of terror groups is a key step to countering them.

In written responses provided to the committee prior to the hearing, Kurilla said that it is “premature to assess” the potential implications of a nuclear agreement without knowing what it might entail, but warned, “Renewed negotiation efforts must consider the significant changes that have occurred in the security and geopolitical environments since the 2018 American withdrawal from the agreement.”

The general said he was not aware of the military options currently on the table for a strike against Iran’s nuclear capabilities, but said he would conduct such an assessment if confirmed.

“My only concern would be that you could never take away the intellectual knowledge that they have on how to increase their nuclear capability and then the reaction that Iran would have to any strike on them,” he added.

In his written responses Kurilla offered a further warning about Iran’s expanding influence throughout the Middle East.

“Iran’s negative influence in the region continues to grow and is incompatible with U.S. national interests, as well as those of our allies and partners,” Kurilla wrote. “Iran views the U.S. as its greatest enduring threat and continues a multifaceted approach to remove U.S. forces from the region while avoiding escalation into major conflict. The risk of miscalculation and escalation remains high.”

To counter Iran’s non-nuclear capabilities, Kurilla suggested continued efforts to increase interoperability with partners and investments in technology like artificial intelligence. He also argued that the U.S.’s current military presence in the Middle East helps hold together regional partners and counteract Iranian influence.

Kurilla also offered praise for increasing cooperation between Israel and Arab states, fueled by the 2020 Abraham Accords, which normalized relations between Israel, the United Arab Emirates and Bahrain, and Israel’s move to CENTCOM.

He said that there is “significant opportunity” for security cooperation — especially on issues like drone and missile defense and cybersecurity, as well as potential joint military exercises between Israel and the Gulf states that face similar threats from Iranian proxies.

“When you’re talking, you’re lowering the temperature in the room. There’s talk of security cooperation as well, and I think that’s only a good thing,” he said. “I’m a big fan of joint exercises because I believe that collectively, rising tides raise all boats. When you make the elements train together, they get better.”