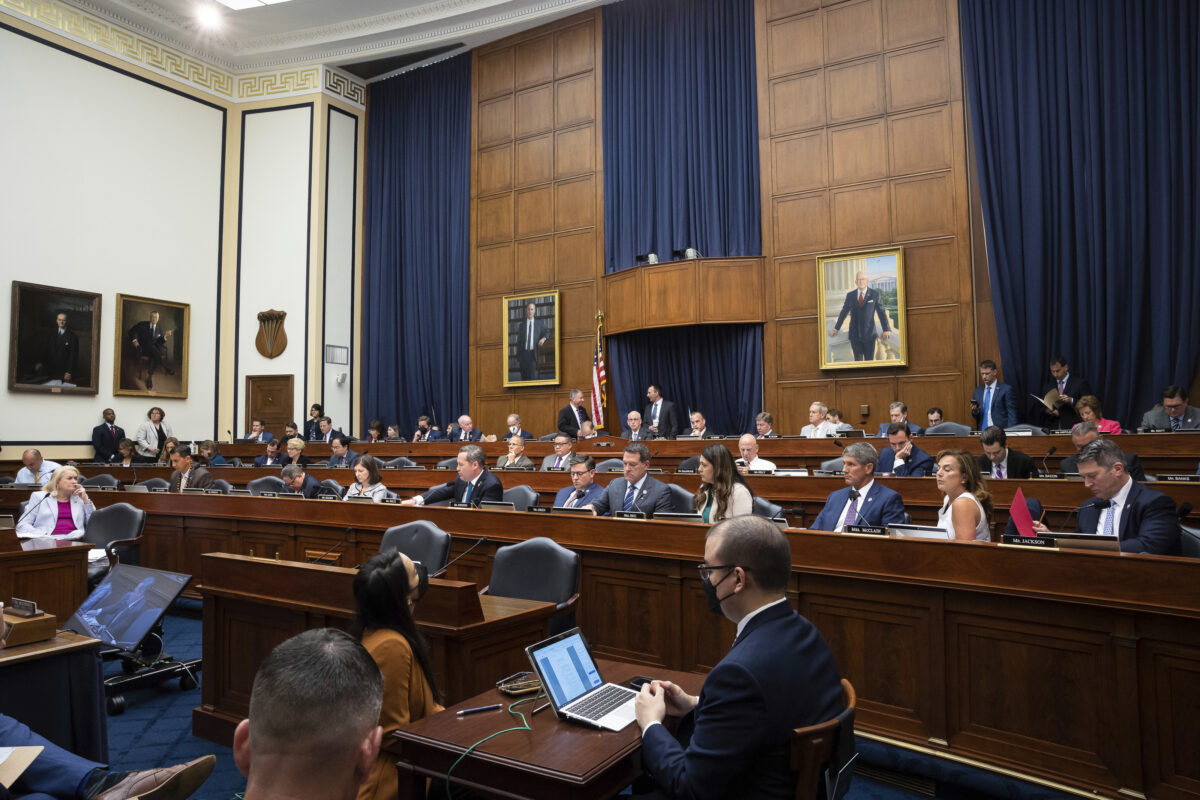 Members of the House Armed Services Committee take part in a markup of the National Defense Authorization Act on Capitol Hill on June 22, 2022.

The House of Representatives backed legislation to work on establishing a joint Middle East air-defense alliance as part of the passage of the 2023 National Defense Authorization Act on Thursday.

President Joe Biden is expected to urge such an approach during his meetings in the Middle East this week. The House’s passage of this provision, the DEFEND Act  — which instructs the secretary of defense to coordinate and draft a strategy for a wide-ranging regional defense architecture — highlights the support for such an initiative among U.S. lawmakers.

The bill, which passed by a 329-101 vote, also proposes $500 million for U.S.-Israel missile-defense cooperation — consistent with the 2016 Memorandum of Understanding; $40 million for anti-drone systems including directed energy weapons — an increase of 60% over last year; and $5 million to test an Israeli aerial loitering munition for potential U.S. purchase. It also establishes a grant program for joint U.S.-Israeli Post Traumatic Stress Disorder research.

The bill further requires additional Defense Department reporting to Congress on Iranian proxy groups, as well as Chinese ties to Iran and its proxies.

The annual NDAA sets out Defense Department policy and recommends funding levels that must be later fulfilled in a separate defense appropriations package. As a whole, this year’s bill proposes a record-breaking $840 billion in defense funding for the upcoming year. The appropriations package currently in the works in the House comes in substantially lower, at $762 billion.

The Senate has yet to pass its proposed version of the NDAA, which also includes the DEFEND Act. The final bill could undergo significant modifications as the House and Senate reconcile their separate versions of the legislation.

Lawmakers proposed more than 1,200 amendments to the bill in total this year, a fraction of which were ultimately added to the bill on the House floor.

By voice votes, the House approved amendments expressing Congressional support for the U.S.-Israel relationship and continued security aid to Israel, requiring a report to Congress on the role of antisemitism in violent extremist movements and the threat that antisemitism poses to the armed forces and national security and requesting a report on the extent of the national security threat posed by domestic terrorist groups, particularly those motivated by white supremacy.

The House voted 244-179 to block the president from selling F-16s or upgraded technology for the fighter jets to Turkey, and 277-150 to limit offensive arms sales to Saudi Arabia.

Within a larger “en bloc” package of multiple amendments approved by a voice vote, the House requested a report on Iran’s internet censorship and digital surveillance, condemned Iran’s human rights abuses and expressed Congress’ “commitment to ensuring Iran will never acquire a nuclear weapon.” Within another en bloc, passed by a 362-64 vote, the House requested a report on the effectiveness of the United Nations arms embargo and how the U.S. is seeking to constrain Iranian arms proliferation without it.

In a third amendment package, passed by a vote of 277-150, the House proposed repealing the 2002 and 1991 Authorizations for Use of Military Force in Iraq — which some critics worry could remove authorities necessary to counter Iranian proxies, as well as requested a report on the humanitarian situation in Lebanon.

Another amendment, passed by a vote of 330-99, requests a report on instances of antisemitism in equal opportunity programs at the Department of Defense.

One, passed by a party line vote of 218-208, requires regular reporting on white supremacist and neo-Nazi activity in the military and federal law enforcement, and strategies to combat it. Another, which passed with four Republican votes, requests further details from the FBI and Department of Homeland Security on why required reports to Congress on domestic terrorism have routinely been delayed and incomplete. A third, which passed by a vote of 217-206, instructs the Defense Department to implement additional policies to counter extremism within the armed forces and screen recruits for ties to extremist groups.