Lawmakers reflect on trips to Israel 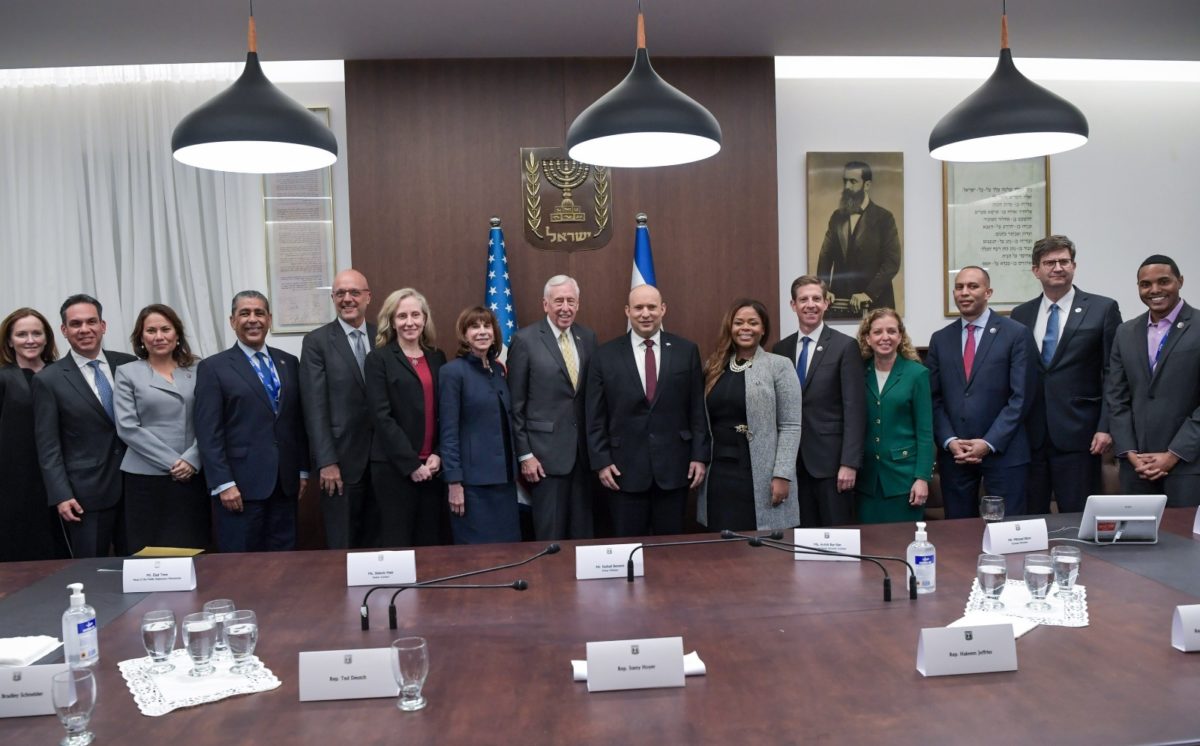 Congressional trips to Israel can bring lawmakers into intimate touch with the knotty reality of Israelis’ lives. The experiences can be shocking, but also unexpectedly hopeful.

Visiting a kibbutz on the Gaza border, Garbarino spoke to a grandmother who pulled out several missiles and incendiary balloons that had landed on her property, near where her grandchildren were playing.

“It’s a scary life over there — to see what they have to deal with day in and day out — it was scary. You think about what would happen if something like that was happening in America… I think it would change a lot of [people’s] minds.”

Also at a kibbutz near the Gaza border, Rice met a woman on the Israeli side who keeps in touch with a woman just over the line in Gaza.

“She maintains a relationship with a woman who lives in Gaza and they just try to keep the relationship going there,” she said. “And her story was incredibly inspirational.”

Jewish Insider caught up last week with a total of six representatives, four Republicans and two Democrats, from the two separate delegations of 30 Republicans and 14 Democrats who visited the country for a week in late February.

“The love of the Israeli people for Israel and the passion that they feel for their nation — it’s so evident — it was amazing,” Garbarino said of his experience overall, offering as an example a 22-year-old officer manning an Iron Dome battery. “To have that responsibility at 22, they just take it — they love it, they accept that responsibility… You don’t see that everywhere, not at all, and not with everyone.”

Rep. Young Kim (R-CA) said that she “felt the hope and resiliency of the Israeli people,” as well as their pride in the country’s technological and business advancement.

The two GOP freshmen said that they were struck to see for themselves the scope of Israel’s security challenges as a small nation surrounded by potential threats on multiple sides.

“Israel… has always faced constant threat on all sides… getting out there, being in the region in person physically was really surreal. it puts everything in perspective that we talk about in Washington,” Rep. Young Kim (R-CA) said.

Kim, who was born and grew up in South Korea, compared the situation to the Demilitarized Zone between North and South Korea.

Despite the perpetual security concerns, some members on return visits to Israel said they felt a stronger sense of optimism than they had seen previously, stemming in part from the Abraham Accords.

“I saw a lot more optimism,” Rep. David Valadao (R-CA), who had last traveled to Israel in August 2013, said. “I do believe the Abraham Accords are very positive. And you can see that in the meetings with the ambassadors from other countries that had come for one of our evenings.”

Rep. Ted Deutch (D-FL), who before the February trip traveled to Israel in the summer of 2021, described a joint event with the ambassadors from the United Arab Emirates, Bahrain and Morocco as feeling “natural” and said the ambassadors were “excited… to be in these new positions.”

“That’s a really positive story,” Deutch continued. “And it was really great to see it play out in Jerusalem while we were there.”

“There was a feeling just of hope that they had a government that was addressing the day-to-day needs of people living in the country — specifically passing a budget,” Rice said. “I was struck by how hopeful the tone was in the majority of the meetings that we had, whether they were regarding the Abraham Accords or the new coalition government or that lovely woman… who lives right there on the other side of Gaza.”

Kim said that she was “pretty impressed” with Bennett, praising what she described as his strategy to keep his diverse governing coalition together by focusing on issues — particularly security issues — on which the different parties agreed.

Valadao noted that Bennett is a “little bit different of a personality” than former Prime Minister Benjamin Netanyahu, who also met with the lawmakers while they were in Israel last month.

He added that Netanyahu “probably just gets to the point a little bit stronger.”

The members said Iran, and the Biden administration’s efforts to reenter the Iran deal, were another major concern for Israeli officials.

During the GOP meeting, according to a senior Israeli official, Bennett emphasized his friendship with President Joe Biden and his focus on keeping the U.S.-Israel relationship bipartisan.

“I think it was a valid point by him and I echo it — and I think it’s not only Israel, it’s a lot of things,” Rep. Tony Gonzales (R-TX) said. “I wish we could have spent the whole trip together, honestly.”

“I think it was more a way of [Bennett] saying, ‘I’m friends with [Biden] but I don’t think he appreciates the anti-Israel wing of the Democratic Party,’” Garbarino said of that exchange.

The New York congressman also said that — while the Biden administration has appeared to put the issue of reopening the U.S. consulate in Jerusalem, which traditionally served Palestinians, on hold — Israelis remain acutely concerned about the administration’s efforts, although the issue did not come up in official meetings.

Both groups also met with members of the Palestinian Authority’s leadership, including Prime Minister Mohammad Shtayyeh.

Valadao and Garbarino said that, under questioning from House Minority Leader Kevin McCarthy (R-CA), Shtayyeh dismissed Hamas rocket attacks against Israel — more than 4,000 of them during the latest outburst of violence in May of 2021— as “fireworks.” The attacks killed 10 people. Thousands of rockets targeted toward Israeli population centers were intercepted by Israel’s Iron Dome missile-defense system.

Garbarino said that Shtayyeh’s remark “really annoyed people” in the delegation and reinforced a view that “[the Palestinians] are not ready to have an adult conversation.” Valadao added that Shtayyeh’s own staff seemed taken aback by this comment.

JI has also learned that, during the Democrats’ meeting, a heated exchange took place between House Democratic Caucus Chair Hakeem Jeffries (D-NY) and Shtayyeh when Shtayyeh accused Israel of engaging in apartheid and Jeffries forcefully pushed back.

Prior to the trip, Jeffries said in a statement about Amnesty International’s report accusing Israel of apartheid that accusations of Israeli apartheid are “demonstrably false, dangerous and designed to isolate Israel in one of the toughest neighborhoods in the world.”

Three of the Republicans who spoke to JI said the PA leaders listed off a number of concerns, including water and electricity charges from the Israeli government and claims that the Israeli government was preventing the PA from holding elections, and asked the U.S. delegation to intervene with the Israels on their behalf. Kim described the PA leaders as having “such victim mentality,” and blaming Israel for the lack of progress toward peace.

“The meeting is valuable — going in and actually seeing the region… and then sitting down with him and listening to him talk is helpful for us to understand the situation,” Valadao said. “But I just didn’t get the impression that [Shtayyeh] is someone who is looking for long-term peace with Israelis in the region.”

Rice said that PA officials engaged in “revisionist history” but they had a “robust discussion.” She added that, as in previous visits, she saw “firsthand the Palestinians and Israelis living peacefully as neighbors for the most part.”

Gonzales described the meeting with Shtayyeh as “one of my more enjoyable meetings.”

“It’s not every day anyone, much less an American, can travel safely through Palestine, and another is you’ve got to sit across and have that conversation… America’s role is to just facilitate more conversation, more real conversation that ultimately turns into real results,” he said, describing heading from PA leadership as “productive.”

“I would just like the United States to play a bigger role in pushing forward on the Palestine-Israel negotiations,” he added.

The Republican delegation was more than twice as large as the Democratic delegation, and only three of the 19 Democratic freshmen joined the trip. Several of the Democrats on the trip had also been to Israel in recent months as part of a House Foreign Affairs Committee delegation.

Rice said that COVID-related delays, the trip’s timing at the beginning of an election year and the smaller Democratic freshman class may have contributed to the smaller-than-normal turnout.

“There were almost 50 members there at the same time, which I thought was good,” she added.

Rice, who is retiring from Congress at the end of her term, said that anti-Israel rhetoric from far-left Democrats is a “huge concern” for her, adding, “It’s really important that people continue to travel to the region because it’s really hard to engage in anti-Israel rhetoric when you go there and you actually see on the ground what’s going on there.”

“My hope,” she continued, “is that people understand how important it is to stand by Israel and maintain this alliance that we have with them.”

Rice’s exhortation to travel to Israel was one that was echoed by several other lawmakers.

“We all walked away feeling like everyone needs to come to Israel,” Kim said.

“Someone told me this and I thought it was spot on: If it can’t be your first trip to Israel, the next best thing is going with someone else who it’s their first trip,” Gonzales added.