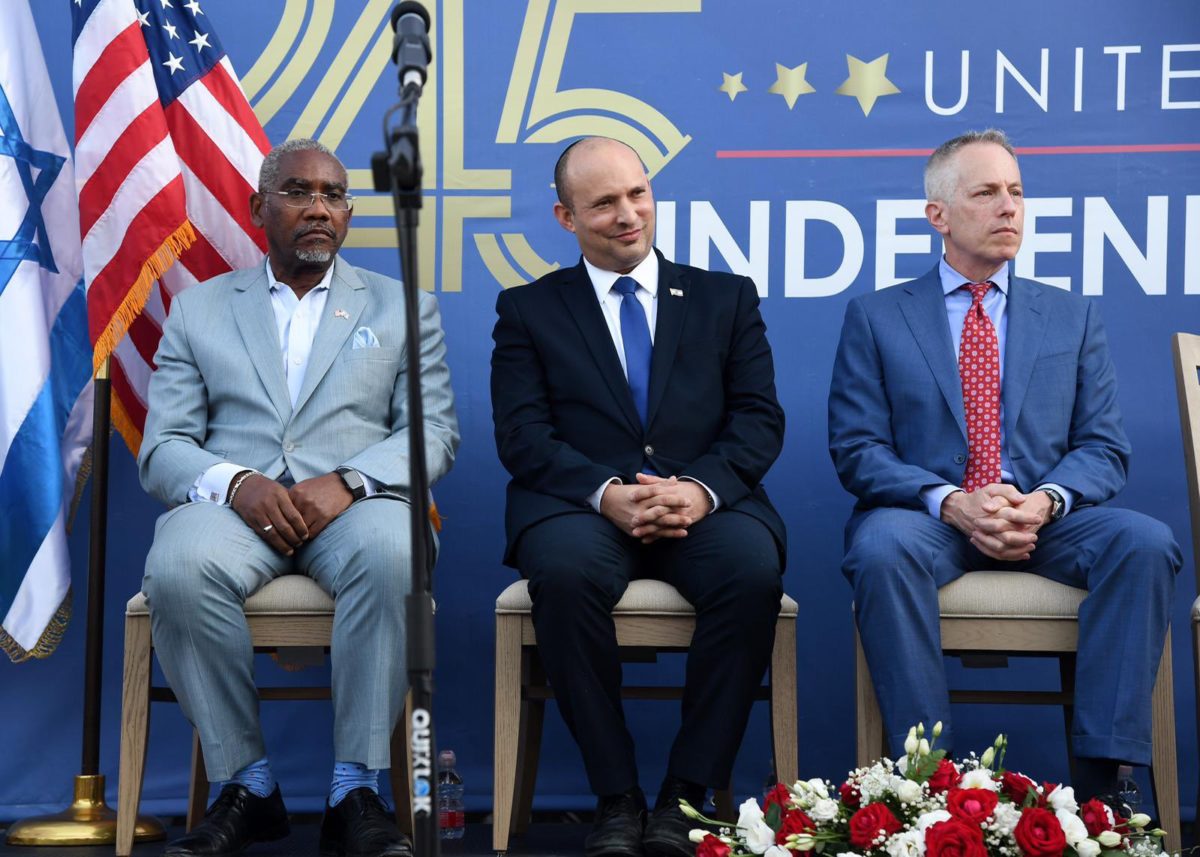 Months after partisan fights over Israel reached a fever pitch during the recent war between Israel and Hamas, seven House lawmakers who traveled to Israel, the West Bank and Qatar last week told Jewish Insider that they were heartened by the new Israeli government’s commitment to ensuring that the U.S.-Israel relationship remains bipartisan.

“One of the things I take great encouragement from was the commitment of everyone we spoke to within the government, to ensuring that support for the U.S.-Israel relationship within Congress remains a bipartisan issue,” Rep. Brad Schneider (D-IL) told JI.

Rep. Kathy Manning (D-NC) added that “there is a sense of excitement of the possibilities that our two [new] administrations may bring to the table… there is a feeling of hope and optimism.”

The 2015 Joint Comprehensive Plan of Action, and Israel’s opposition to the agreement, was also a primary topic of conversation with Israeli leaders, according to several lawmakers on the trip, as were concerns about how U.S. aid to Gaza might end up inadvertently benefitting Hamas.

Multiple members highlighted the unlikely nature of Israel’s new governing coalition, which includes a spectrum of parties from the right wing to a left-wing Arab party, but expressed confidence that it could hold together.

“I’m going to give [Bennett] the benefit of the doubt,” said Rep. Andy Barr (R-KY), the most senior Republican on the trip. “I’m optimistic that they can [hold together]… It’s not that they agree on everything, it’s that their tone was upbeat, positive. You can tell there’s a genuine affinity for one another. And let’s face it, Prime Minister Bennett, his survival [politically] depends on making this work.”

Rep. Abigail Spanberger (D-VA) — who was visiting Israel for the first time — said she appreciated that coalition members were upfront in acknowledging that the political grouping is unorthodox.

“Sitting down and having very human conversations with all these people I have read so much about was the most remarkable part of the meetings for me,” she said. “Hearing them all actually say, ‘We know that this is an interesting coalition… We know that it’s going to be difficult,’ helps make sense of something that on paper seems very confusing.”

The group met for approximately two hours with Bennett, who received high praise from both Republicans and Democrats.

“Prime Minister Bennett is really committed to ensuring an open and honest relationship with the United States as the close friends and allies with shared values that we have,” Rep. Ted Deutch (D-FL) said. “We had a terrific conversation with him about both the challenges that Israel faces, especially on the security front… but also about the promise and the optimism from the high-tech industry, to working hard to ensure opportunity for all Israelis, Jewish and Arab.”

Republicans, with whom former Israeli Prime Minister Benjamin Netanyahu had forged increasingly close ties, said they were confident that the relationship between Republicans and Israel would remain strong amid the change in government.

“We still admire Prime Minister Netanyahu on [the security] front. But I was impressed with Naftali Bennett. I really was,” Barr said. “I saw a similar strength and resolve on countering terrorism and countering Iran in Bennett.”

Republicans who spoke to JI were somewhat less effusive in their praise of Lapid— who is center-left politically, in comparison with the right-wing Bennett — although Rep. Nicole Malliotakis (R-NY) noted that the group’s meeting with Lapid was much shorter than the meeting with Bennett.

Barr called Lapid “charismatic, jovial, committed to the U.S. alliance and friendship” but added that “clearly he does have a different kind of approach than Bennett and Netanyahu.”

“My hope would be that we would have a continuity of the friendship and the security relationship under Lapid as well,” Barr continued.

The new Israeli government, and Lapid in particular, have made it a priority to repair bipartisan relations with the U.S., which became strained under the Netanyahu government. Democrats said they have every expectation those efforts will succeed.

“We had some frank conversations [with Lapid] about how that has ebbed and flowed over the past couple of years, and how, in some circumstances, the United States’ relationship with Israel was used as a bit of a wedge issue back home here in the United States,” Spanberger said. “He made clear his honest appreciation of the fact that we had come with a bipartisan delegation and his desire to see the U.S.-Israel relationship be one that is firmly bipartisan.”

When the delegation traveled to Ramallah, the PA’s “pay for slay” programs to the families of imprisoned and deceased terrorists were a major focus in a three-hour conversation with PA leadership, lawmakers said, although they offered differing accounts of the PA’s receptiveness to those discussions.

“I heard a lot of doublespeak,” Barr said. “What Abbas said was, ‘We will work with the new administration to address their concerns about martyr payments.’ And then in the same breath they said, ‘What do you expect us to do? We’re going to help these families who longer have a support system.’”

Schneider added that “from other conversations that I’ve heard and had, my sense is that there has been some movement.”

Rep. French Hill (R-AR) fell somewhere in the middle, saying that the officials initially appeared to have softened on the issue, compared to previous conversations, but backpedaled during the meeting to a more hardline stance.

“As the meeting went on… other people responded to that question and they were much more aggressive saying, ‘You can’t expect us to change that. That would have a major impact on our population’ and sort of retracted some of the technical speak about reforming it,” Hill said.

The Arkansas congressman said that Abbas also voiced strong opposition to the Abraham Accords, which normalized relations between Israel and several Arab nations.

“He said that there is no other substitution or approach acceptable to them beyond the 2002 Beirut [Arab League] agreement,” he said.

A number of the lawmakers indicated that they did not find the PA meeting to be productive.

Schneider said that he “heard the same thing we always hear from them,” and Manning emphasized she “didn’t hear much movement from [Abbas]… or from any of his leadership team” on the PA’s demands for a two-state solution along 1967 borders.

Many of the lawmakers appeared more enthusiastic about a visit with Palestinian business leaders from the Palestinian American Chamber of Commerce. Hill said the conversation included a discussion of problems for West Bank businesses with both the Israeli government and the PA.

According to Spanberger, “They were talking about economic prosperity as a counterpoint to the message of desperation. That the economic investment and the strength of the internal economy that the West Bank could have — that they’re trying to create — how that can function as an inoculating factor against the way Hamas was able, at least in Gaza, to really integrate.” The Virginia Democrat added that the business leaders also supported peace with Israel.

Hill said that the businesspeople also indicated little “faith in the Palestinian Authority’s ability to change the current political direction.”

During the Qatar leg of the trip, lawmakers raised the question of normalizing relations with Israel with Qatari officials, but they did not seem amenable to the idea.

“Qatar views its position as being a neutral arbiter between the Israelis and the Palestinians,” Manning said. “They think their current positioning works to everyone’s advantage.”

According to Malliotakis, Israeli officials said they’re looking to countries like Oman and Indonesia for potential future normalization agreements, as well as Saudi Arabia in the longer term.

Meeks, Deutch, Manning, Schneider, Spanberger, Barr, Hill and Malliotakis were joined on the trip by Reps. Sara Jacobs (D-CA) and David Cicilline (D-RI), who did not respond to interview requests.
Two Republican lawmakers — Reps. Peter Meijer (R-MI) and Joe Wilson (R-SC) — who told JI ahead of the trip that they would be participating in the delegation did not ultimately go. For Wilson, the trip conflicted with a delegation to Norway for the Helsinki Commission, for which he is a commissioner. A Meijer spokesperson did not respond to requests for comment.