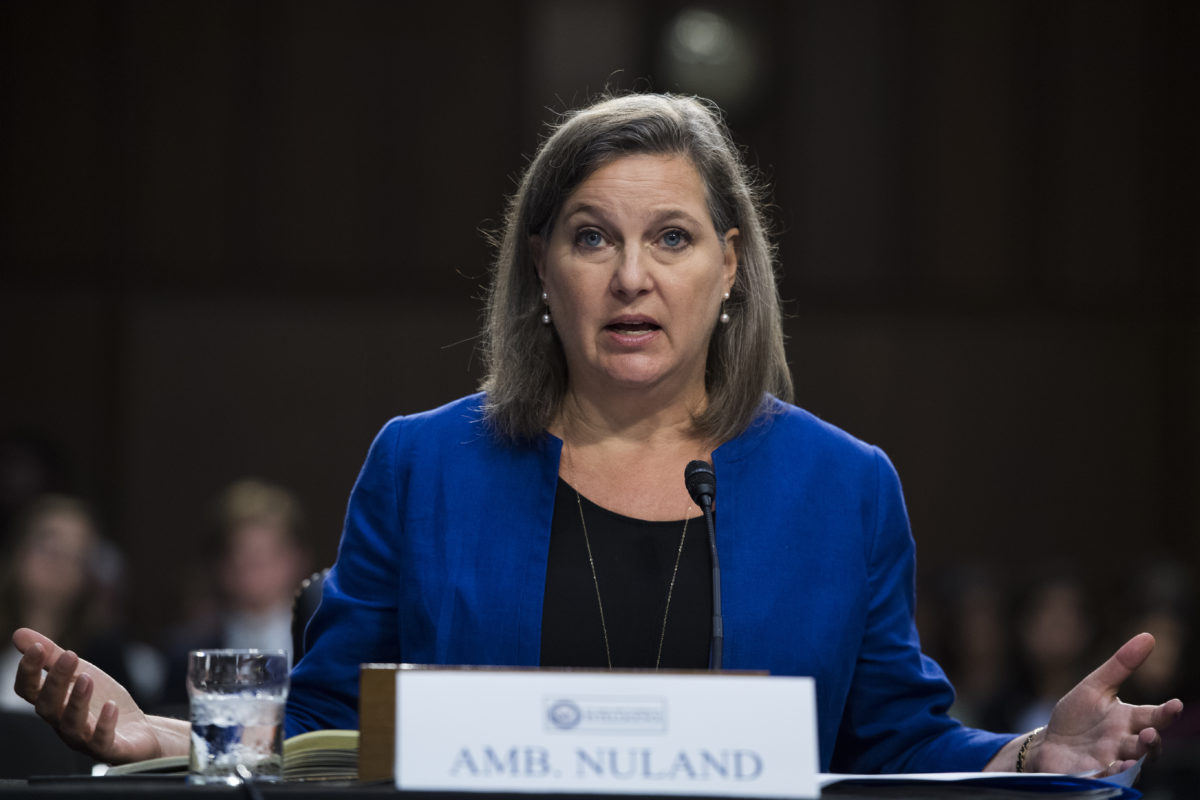 Victoria Nuland, the Biden administration’s nominee to be under secretary of state for political affairs, avoided committing to a specific strategy to address Iran’s nuclear program while highlighting the administration’s determination to bring Tehran into compliance with the 2015 nuclear agreement during a Senate Foreign Relations Committee confirmation hearing on Thursday.

Nuland previously served under President Barack Obama as assistant secretary of state for European and Eurasian affairs and as U.S. ambassador to NATO under President George W. Bush, as well as a foreign policy advisor to Vice President Dick Cheney. In 2014, she led the U.S. response to the Ukraine crisis.

In an exchange with Sen. Chris Murphy (D-CT), Nuland declined to definitively endorse the position on the Joint Comprehensive Plan of Action (JCPOA) that Murphy and more than two dozen other Senate Democrats expressed in a letter to Secretary of State Tony Blinken earlier this week. The letter called for a swift reentry into the 2015 Iran nuclear deal, a contrast with a recent bipartisan letter from 43 senators which called on the U.S. to negotiate a more comprehensive deal addressing nuclear and non-nuclear issues.

“I think we’ve got to pursue all of these problems in tandem. Whether that is a question of a comprehensive agreement, I think there are many players and many different pieces of this,” Nuland said. “Walk and chew gum would be my answer.”

Nuland also made clear that the nuclear issue is the administration’s priority.

“What is most urgent today is that Iran is breaking out — again — of its nuclear box. It is enriching at 20%, it is using these advanced centrifuges. We’ve got to get them back in the box on the nuclear front. But at the same time we can and should be countering their malign regional influence,” she said. “Its breakout time is shortened, so [the] first job [is to] get them back in the box. And then together define what ‘longer and stronger’ means.”

Intelligence officials have predicted that last weekend’s blackout on the Natanz nuclear facility may have extended Iran’s breakout time by nine months. In the wake of the incident, which Iran has claimed was an Israeli attack, the regime announced it would begin enriching uranium to 60%.

Critics of the Biden administration’s approach argue that it is not viable because Iran may not agree to follow-on negotiations. According to Mark Dubowitz, CEO of the Foundation for Defense of Democracies, the administration’s talking points also fail to articulate whether Iran’s other malign activities will be part of the negotiations to lengthen or strengthen the Iran deal or whether they will be negotiated separately.

“I think Nuland is keeping the administration’s options open… even though so far they’ve already committed to return to the JCPOA as their priority,” he said.

Danielle Pletka, a senior fellow at the conservative American Enterprise Institute, agreed that Nuland’s answers were vague and accused the Biden administration of being “desperate to make a deal with Tehran.”

During the hearing, Nuland pledged to engage with Congress consistently during negotiations with Iran, and particularly on any final deal.

“Whatever agreements we reach with Iran need to be supported in a bipartisan fashion, not only on this committee but across the Congress and across America. That will ensure that they are binding across administrations and for the long term. So we have to do our job and consult at every phase and hear your ideas and incorporate them,” Nuland said. “I would pledge to be here as often as we need to be to ensure that we all support what’s happening.”

Even among critics of the 2015 nuclear deal and the Biden administration’s approach, Nuland is highly regarded. Dubowitz called her a “tough negotiator” and “very clear-eyed and sober-minded” about the threat from authoritarian regimes. Pletka called her “a pro, not an ideologue” and “a smart woman and a shrewd diplomat.” But, Dubowitz said, Nuland is unlikely to be a major player on Iran policy, given her background in Russia issues and the proliferation of Iran experts already within the administration.