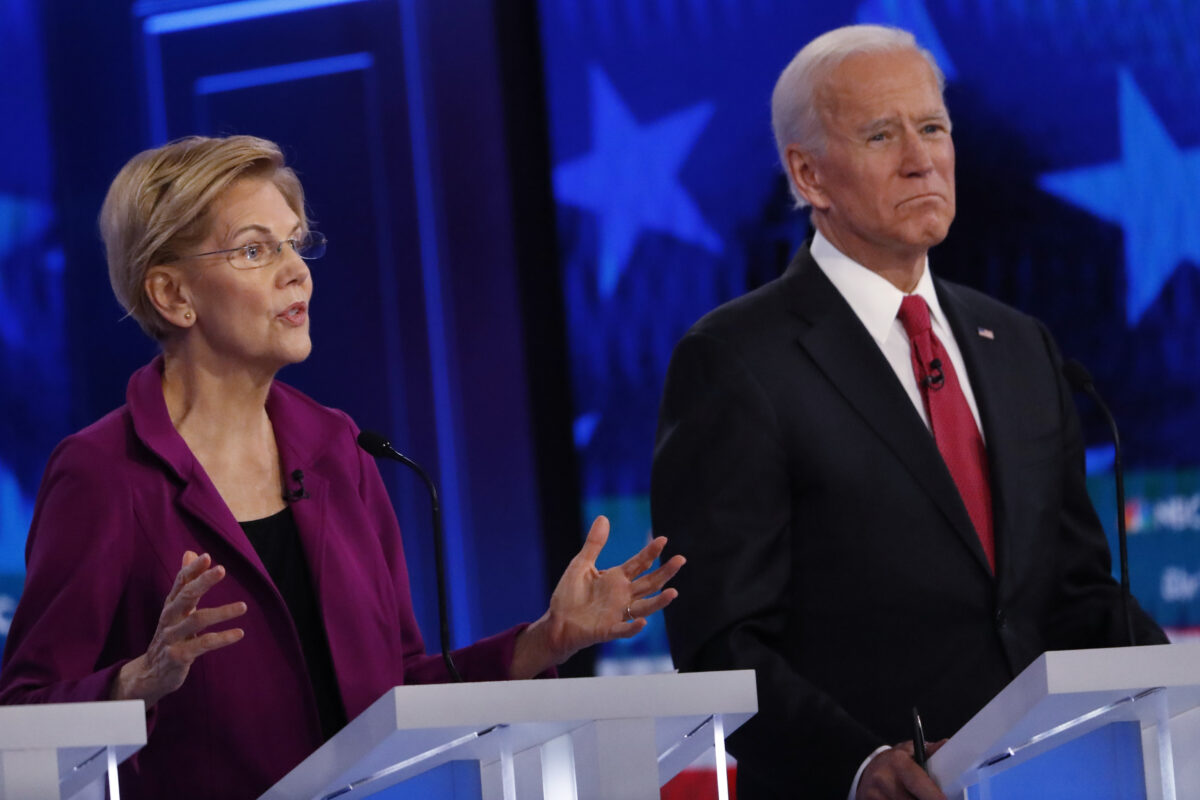 With ten weeks to go until the Iowa caucuses, a presidential debate during the most wide-open Democratic presidential race in a generation was relegated to a sideshow by the ongoing impeachment inquiry against President Donald Trump.

As ten presidential hopefuls gathered on a soundstage in southwest Atlanta, headlines around the world were dominated by Ambassador Gordon Sondland’s testimony earlier Wednesday acknowledging “quid pro quo” in connecting a White House summit with the Ukrainian president in exchange for a politically motivated investigation. On stage, impeachment was the first topic covered to consensus from those vying to oppose Trump in 2020.

Yet the debate, condensed into just over two hours, featured robust discussions of issues ranging from childcare to foreign policy in addition to sharp criticisms on substantive issues.

Sen. Cory Booker (D-NJ) directly attacked former Vice President Joe Biden for the latter’s opposition to legalizing marijuana, a position Biden reiterated on Saturday when he suggested the substance was “a gateway drug.” The New Jersey senator gibed at Biden, “I thought you might have been high when you said it.” Then — adopting a more serious tone — Booker pointed to the vast racial disparities in arrests for marijuana possession and described legalization  as an issue of racial justice.

Afterwards, Rep. Katie Porter (D-CA), who has endorsed Sen. Elizabeth Warren (D-MA), described Biden’s comment to Jewish Insider as “an unfortunate mistake.” When asked if it concerned her, Porter took a long pause and said, “There were a number of moments in the debate where I thought different candidates displayed strengths and weaknesses.”

The Booker campaign took a victory lap, despite the New Jersey senator facing the potential of being crowded off the debate stage in December. Addisu Demissie, Booker’s campaign manager, told Jewish Insider, “I think everytime Cory Booker is on one of these stages, he showed why he belongs there and he did that tonight. He was forceful, he was emphatic, and ultimately he showed why he showed why he should be president because he can bring us together.” Demissie added, “If we get another chance in December, we’re going to do exactly the same thing and ultimately I think we’ll be successful in February.”

Both Senator Amy Klobuchar (D-MN) and Harris were asked about their plans for paid family leave, the first time the issue was directly addressed in a Democratic debate. Klobuchar pitched her proposal for new mothers to receive three months of paid leave, taking veiled shots at candidates on the party’s left flank. “I’m not going to go for things just because they sound good on a bumper sticker and then throw in a free car,” she said, “We have an obligation as party to, yes, be fiscally responsible, yes, think big, but be honest.”

The only candidate to mention Israel was Sanders, who echoed remarks he made last month at the J Street national conference in Washington. “It is no longer good enough for us to be simply pro-Israel,” the Vermonter said Wednesday night. “I am pro-Israel, but we must treat Palestinian people as well with the respect and dignity they deserve. What’s going on in Gaza right now with youth unemployment at 70 percent or 80 percent is unsustainable. We need to be reconsidering who our allies are around the world and not supporting brutal dictatorships.”

Unlike Biden, top-tier candidates Warren and South Bend Mayor Pete Buttigieg left the debate largely unscathed after rivals telegraphed attacks against them. After clashing at the October debate, Biden and Warren largely avoided confrontation. Biden instead directed his attacks at billionaire Tom Steyer for his past investments in coal mines.

Most notably, Buttigieg, whose poll numbers have surged in recent weeks, managed to only take glancing blows from his primary rivals despite direct prodding from moderators. When given an opening to attack the South Bend mayor over his relationship with the African-American community, Harris pivoted to the importance of black voters in the Democratic coalition. Earlier this week, Buttigieg polled at 0% among African Americans in South Carolina, behind candidates like author Marianne Williamson, who did not qualify for Wednesday’s debate stage.  Booker also offered subtle criticism of Buttigieg, noting, “I happen to be the other Rhodes Scholar mayor on the stage.”

Buttigieg took only one frontal attack — from Rep. Tulsi Gabbard (D-HI), who attacked his judgment for his willingness to allow the U.S. military to provide security aid to combat cartels in Mexico. “Do you seriously think anybody on this stage is considering invading Mexico?” Buttigieg responded. The South Bend mayor blasted Gabbard for her 2017 meeting with Syrian dictator Bashar Al-Assad. “If you’re talking about experience, let’s talk about judgment,” Buttigieg said. “I would not have sat down with a murderous dictator like that.”

“I gotta think Pete was an absolute winner,” a Buttigieg aide told JI. [He] came out not just unscathed but he managed to turn the few attacks he did face around on those who came after him.” Harris and Gabbard also renewed their dispute from the July debate when Gabbard attacked Harris’s prosecutorial record. After Gabbard threw a jab at 2016 Democratic nominee Hillary Clinton, Harris said Gabbard ”spent four years full-time on Fox News criticizing President Obama [and] buddied up to Steve Bannon to get a meeting with Donald Trump in the Trump Tower.”