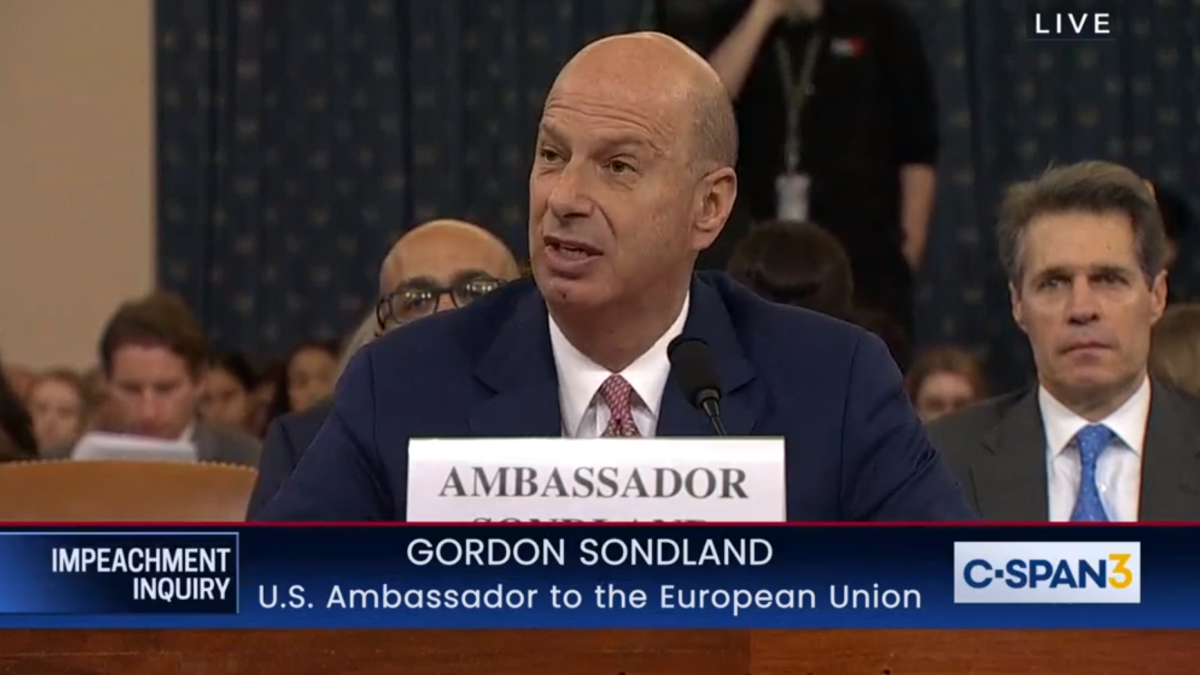 U.S. Ambassador to the European Union Gordon Sondland on Wednesday delivered a damning testimony of President Donald Trump’s involvement in the Ukraine scandal during a public hearing of the House Intelligence Committee.

During the hearing, Sondland told the committee members that he worked with Rudy Giuliani on issues related to Ukraine at the “express direction” of the president. In his sworn testimony, Sondland addressed claims that support for Ukraine was conditioned on an investigation into a company with ties to Trump’s political opponents: “Was there a ‘quid pro quo?’ With regard to the requested White House call and White House meeting, the answer is yes.”

Speaking to Fox News, Kenneth Starr, who spent years investigating former President Bill Clinton, said “This obviously has been one of those bombshell days,” and predicted that Democrats will move forward on impeachment procedures.

“I have known Gordon Sondland… for well over a quarter of a century … There is a really small Jewish community in Oregon, and we pretty much know each other. The Ziedals and the Rosenfelds, the Tanzers and the Sondlands. We’re just people who get togethers and back good causes, and try to stand up for our state. And particularly [we] have an interest in global kind of matters because of our family background.”

“We are both — Gordon Sondland and I — we are the children of German parents, and both of our families fled the Nazis in the ’30s. Gordon’s father used his foreign language fluency to help the British army during the war. My dad who lives for a while in Ridgefield, Connecticut, wrote the propaganda pamphlets for our army, that we dropped on the Nazis, and I am telling you — those pamphlets smoked. I mean, it basically told the Nazis they were gonna freeze if they didn’t pack it in and give up to the Red, White and Blue. So both, Gordon’s family and mine, ended up in the U.S. as refugees. And I think we all know that America has always called to our shores from every nation on earth… and, in affect, we had a constant infusion of individuals who share Red, White and Blue values of hard work and love of country.”