An all-out brawl in Detroit

Candidates take their shots, as many realize they are unlikely to return to the next matchup in September. 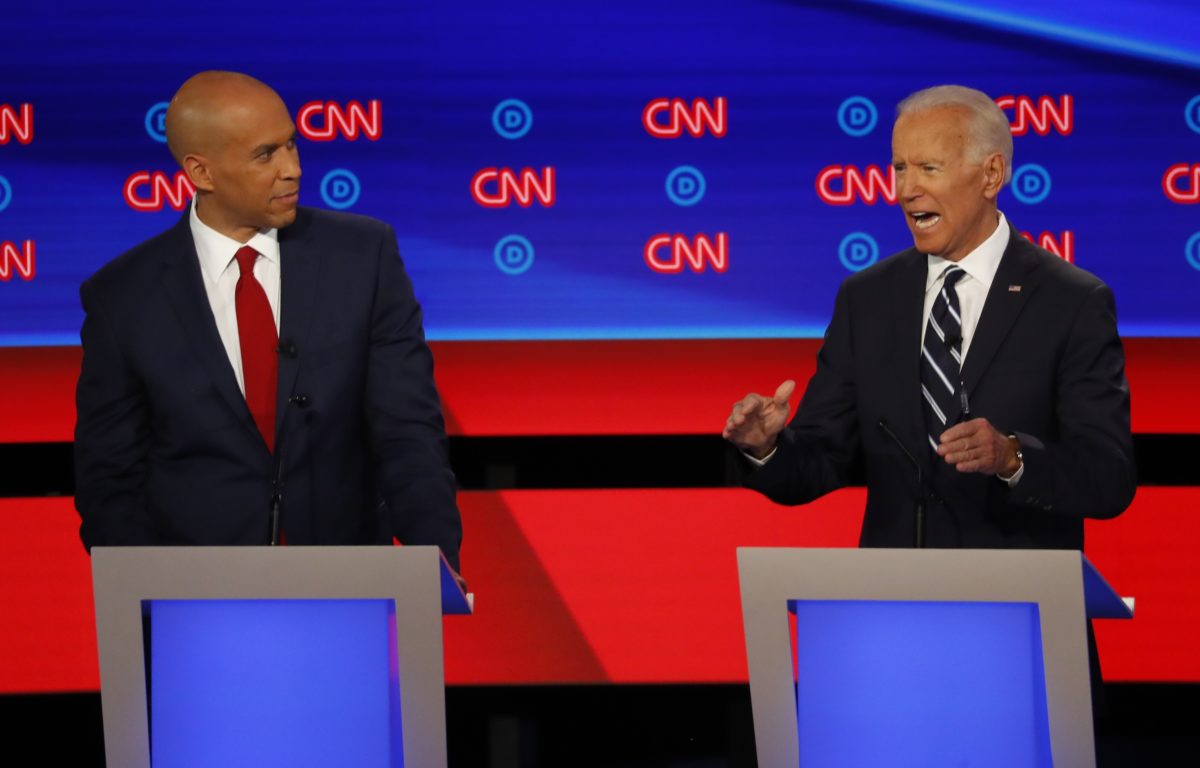 DETROIT — The Democratic debate Wednesday night was an all-out brawl. One night after moderate underdogs spent the evening vainly throwing jabs at the progressives on center stage, punches were seemingly thrown in almost every direction during the second of two debates this week at the Fox Theatre in Detroit, Michigan.

Former Vice President Joe Biden not only took criticisms as the frontrunner, but took some preemptive shots at rival candidates after a poor performance during the first debate in Miami. Most notably, Biden targeted Sen. Cory Booker on criminal justice and his record as mayor of Newark — which prompted the New Jersey Democrat to retort: “You’re dipping into the Kool-Aid and you don’t even know the flavor.” Booker went on to criticize Biden for his past support of policies that led to mass incarceration.

Biden, though, was able to push back on other attacks from New York Sen. Kirsten Gillibrand about a 1981 op-ed written by the then-Delaware senator, expressing his opposition to some tax credits for childcare because it could lead to the “deterioration of the family.”

Many on the stage Wednesday night were aware that this could be their last time participating in a 2020 primary debate. During the next showdown in Houston in September, the field is expected to be significantly culled due to more stringent standards. Democrats will have to meet higher polling thresholds and receive donations from 130,000 individual contributors. This likely led to candidates launching more attacks on their opponents, hoping for attention and a viral moment to keep them in the race. In her closing statement, Gillibrand made a pitch for donations, proving the impact of the new rules.

After experiencing a surge in the polls for attacking Biden’s past opposition to busing in the 1970s in the last debate, Sen. Kamala Harris became a target of attacks as well. Most notably, Hawaii Rep. Tulsi Gabbard attacked her record as a prosecutor, criticism that made Harris appear visibly uncomfortable.

After the debate, Biden’s campaign aggressively touted his ability to “punch back” at attacks against him, which his defenders have called “smears.” Campaign spokeswoman Symone Sanders went so far as to insist that all nine other candidates ganged up on the former vice president but that he “stood strong and stood tall.”

Others, however, pushed back at the concept that Biden was “smeared.”

“This is a competition among people who are aspiring to the highest office in the land,” Rep. Joaquin Castro, the twin brother of 2020 contender Julian Castro, told Jewish Insider. “There comes a time when there are distinctions that are going to be made among candidates and that was tonight.” Castro added that: “I think as long as you are respectful personally to somebody and don’t smear their family or say anything like that, I think it’s fair.”

Washington Governor Jay Inslee, who has been running a campaign focusing on the existential danger posed by climate change, sparred with Biden about what he viewed as the former vice president’s inadequate plan on the issue.

“I certainly pointed out some differences between my plans and his and I was pointed and very accurate,” Inslee told JI after the debate. “The unfortunate fact is, science has given us deadlines and if we don’t meet those deadlines our goose is cooked, we’re toast.”