The annual trip, organized by the Jewish Community Relations Council of New York, had been on pause during the COVID-19 pandemic 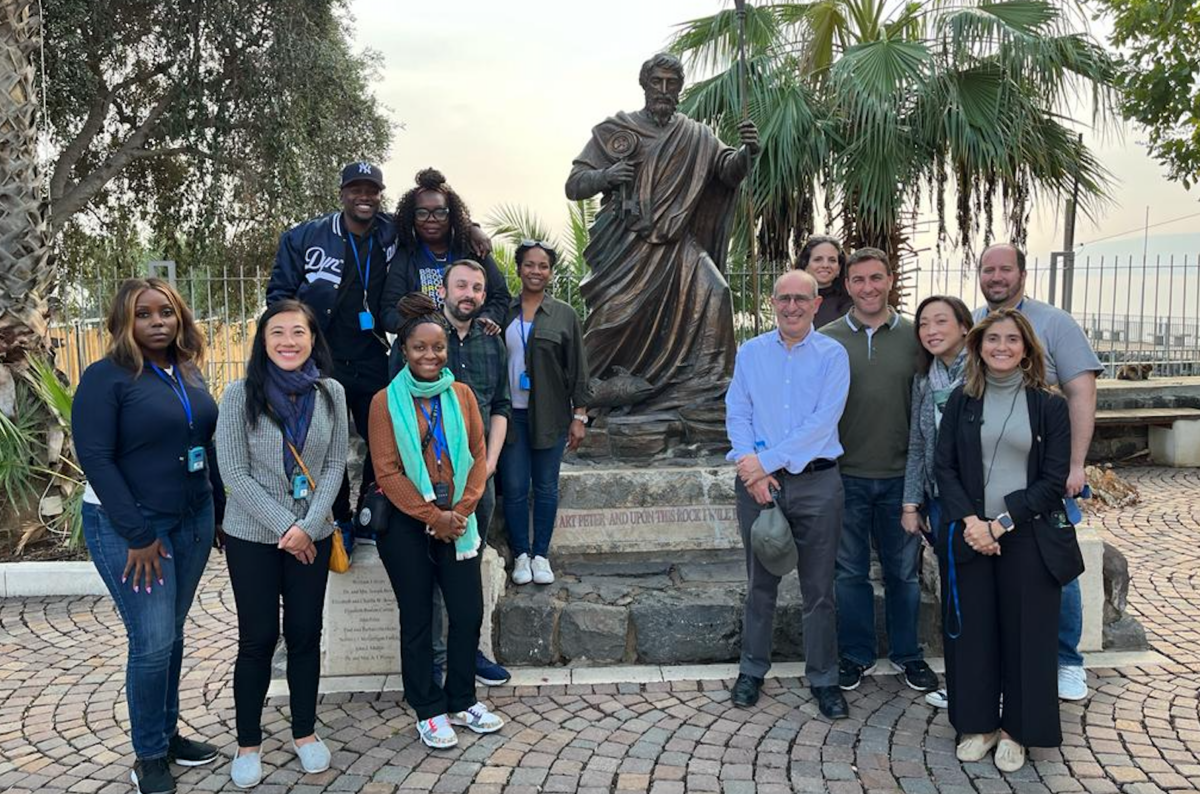 Members of the delegation at Capernaum

What moved New York City Councilmember Marjorie Velázquez most during her first visit to Israel was hearing about the life of an Ethiopian Jewish restaurant owner and the harmony she’s found between her many identities.

“She also is part of this community center that takes the opportunity to talk about what it is to be an Ethiopian Jew and the complexities of being a Black Jew,” Velázquez told Jewish Insider. “I am a Puerto Rican woman living my own truth, right? I am the first person of color to represent my district, but hearing her perspective and how she owned her space, and seeing that, and more importantly seeing how she talks about and educates people in a way that opens up in a safe space, is what we need to expose our communities more to.”

Velázquez, whose district includes the Bronx neighborhoods of Pelham Bay, Morris Park and City Island, was among a cohort from the New York City Council that traveled to Israel for a weeklong “study tour” of the country ahead of the new year.

Sponsored by the Jewish Community Relations Council of New York, the 12 councilmembers — most of whom had never been to the Jewish state before — were given a firsthand look at the diversity of Israeli society, the geopolitical issues it faces and how its opposing communities coexist.

“We aim to show Israel in all its complexity and look to bring people together around education on issues faced in Israeli society and here in New York. Israel and the Middle East are incredibly diverse and we believe learning about that diversity is important for leaders in a city such as New York,” said JCRC-NY CEO Gideon Taylor.

“Meeting folks one-on-one and hearing their stories and how their lives are, what impacts them daily, was crucial to understanding the complicated nature of what is going on in Israel,” Velázquez said.

The annual trip, which the JCRC has sponsored for more than 30 years and which had been on pause since the start of the COVID-19 pandemic, came amid an uptick in antisemitic and other hate crimes in New York City in recent months.

​​”So much of what we lived, learned and experienced in Israel was about the strength and importance of identity, and as a Christian, it was so powerful for me to see the parallels in the history of where I come from and the Israeli people,” Councilmember Kamillah Hanks told JI via email. “This trip further underscored the depth and the insidiousness of antisemitism, and as someone who represents many Jewish constituents on Staten Island, I was grateful for the opportunity to learn more and think about how to better serve this community and continue the fight to eradicate antisemitism and hate.”

The tour was led by Jewish Caucus Chair Eric Dinowitz, a change from years past when the council’s speaker would head the trip. Council Speaker Adrienne Adams did not attend, saying it was “prudent” to remain in New York at the time.

“When we talk about building bridges and fighting hate, it can only happen in our own communities, and we have to learn from one another,” Dinowitz, whose Bronx district includes Riverdale, told JI. “What was extremely powerful is seeing the challenges and success of Israel through the eyes of other members of the council.”

The councilmembers had a packed itinerary that included stops in Jerusalem, Tel Aviv, Haifa and Ramallah to speak with Israeli and Palestinian individuals and representatives.

“I think I have a deeper understanding of the concerns and complexities facing the region that I don’t think I could truly appreciate by just reading the newspaper and other accounts of the region, so I appreciate that,” Councilmember Sandra Ung, who represents parts of Queens, told JI.

Despite the JCRC’s maintained agenda, more than one organization had urged councilmembers not to attend the trip. In 2020, the Democratic Socialists of America announced they would only endorse candidates who pledged not to go on the JCRC-led tour, drawing rebukes at the time from the JCRC, the Met Council and federal lawmakers.

The councilmembers, however, were moved by the experience, with more than one member naming Haifa as having been particularly memorable.

“It is a city where there’s a balance between those who identify as Jews and those who identify as Arabs, and how they’re able to live harmoniously together while still maintaining distinct identities and feeling empowered by their respective traditions,” Staten Island Councilmember David Carr told JI. “I really think that’s kind of an important recipe for success that I think you need in any cosmopolitan community. In particular in New York City, you need the different communities that call the area home to have a supportive sense of identity and pride and sort of acceptance of their cultures, because everybody needs to kind of come to the table as equals in order for us to kind of live together and build things together and reach across the aisle.”

“I think that in Haifa, you see a great example of two communities living side by side who feel a sense of pride and empowerment in being who they are, and kind of approach each other as equals in terms of trying to live together in a civically engaged way,” Carr added.

“My biggest takeaways [from the trip] are that I came to understand better the need that is felt amongst the Jewish community in Israel for a Jewish state,” Carr said. “My other big takeaway is the fragility of the relationships between Israel and those that surround them.”

The most significant takeaway, however, was the importance of learning from others.

“I’m an educator, and I think there is no better way to learn the complexities of a situation than by experiencing it,” Dinowitz said. “It is vital that those of us in positions to make real change educate ourselves as much as possible by engaging in as many experiences as possible — and especially as it comes to the Jewish community, Israel is an integral part of that education.”

Velázquez also stressed the importance of education and empathy in combating bigotry. “How do you stop hate? [It’s] by providing information and it is approaching people from a position and a purpose of love.”