Herzog met with President Joe Biden on Wednesday for a session that focused ‘mainly’ on Iran, he said 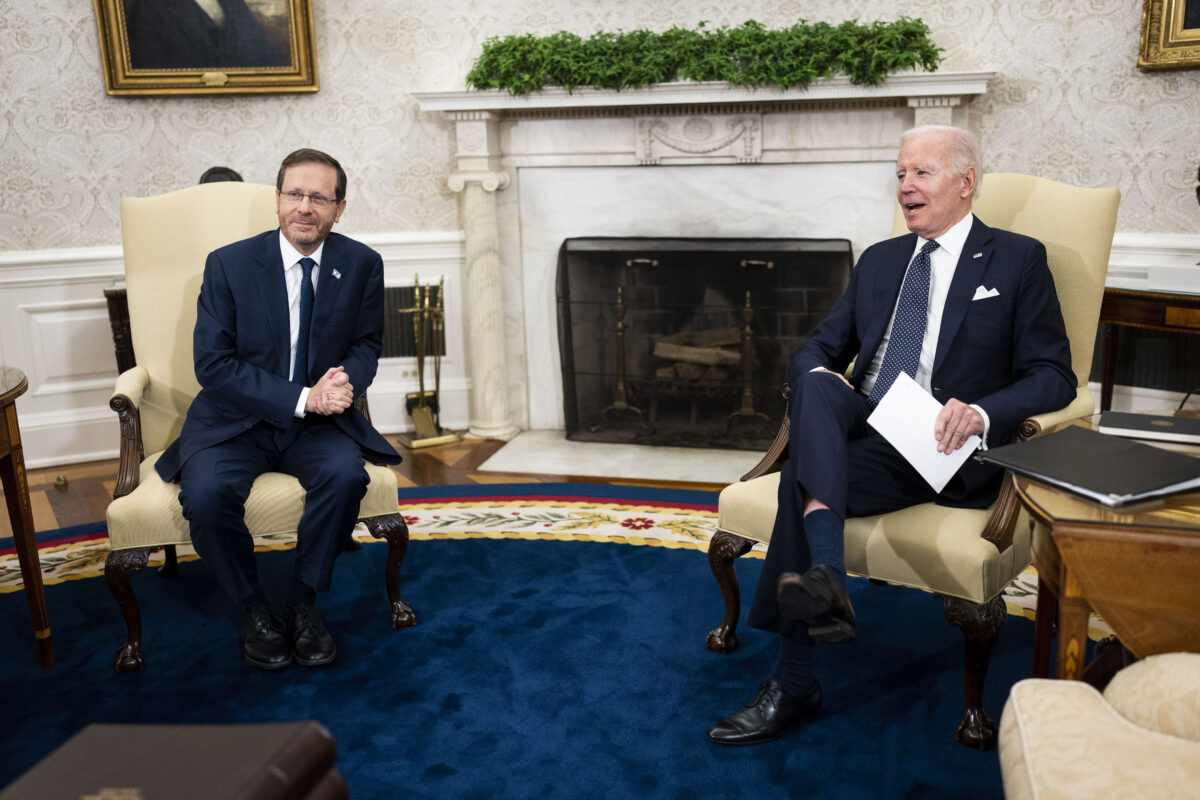 President Joe Biden speaks during a meeting with Israeli President Isaac Herzog meets in the Oval Office of the White House on October 26, 2022 in Washington, DC. Herzog is in Washington for a two-day visit to meet with U.S. leaders and to discuss security issues. (Photo by Doug Mills-Pool/Getty Images)

Israeli President Isaac Herzog met with President Joe Biden in the Oval Office on Wednesday for a meeting that focused “mainly” on Iran, the Israeli leader told reporters outside the West Wing.

The Iran discussion touched on a variety of subjects, including its nuclear ambitions, its crackdown on protesters domestically and its provision of weapons to Russia, which Russia has used in Ukraine, Herzog added.

The latter is a theme the Israeli president has repeated throughout the two-day visit to Washington even as he has avoided directly condemning Russia by name for using the weapons. In a CNN interview following the Oval Office meeting, Herzog said Biden did not ask Israel to provide Ukraine with air-defense systems.

A senior Israeli official said that the Biden administration views talks to revive the 2015 Iran nuclear deal as irrelevant at the current time, having concluded, as Israel has, that there are no serious negotiating partners in Iran’s government. Secretary of State Tony Blinken also offered a pessimistic outlook on the status of talks yesterday, saying that he doesn’t expect a return to the deal in the “near-term.”

The Israeli official also downplayed Israeli concerns about the tensions between the U.S. and Saudi Arabia — which some U.S.-based experts have said it is likely a roadblock to further normalization between Saudi Arabia and Israel — saying the issue did not come up in the Oval Office. The official emphasized that Israel’s engagement with the region is continuing and that when tensions relax, discussions on further regional integration can continue.

Asked by a reporter outside the West Wing whether he was concerned about rising antisemitism in the United States, Herzog confirmed that he and Biden had discussed the subject.

The Israeli president told CNN that Biden had been “crystal clear, was on target in fighting antisemitism with all tools possible” and said he was “extremely pleased to see this overwhelming reaction against the comments by Kanye West.” The White House readout said Biden condemned antisemitism, “including anti-Israel bias in international fora.”

Ahead of hotly contested elections in both countries next month — which some fear could sweep far-right extremists into power in Israel — Herzog has emphasized the durability of the U.S.-Israel relationship, regardless of political changes, a message he reiterated in the Oval Office on Wednesday.

“One thing is clear and I think this visit epitomizes it best is that our friendship and strong bond transcends all political differences and opinions and parties,” Herzog said.

Biden offered a similar message, saying, “I’ve said this 5,000 times in my career, the ironclad commitment the United States has to Israel based on our principles, our ideas, our values.”

The Israeli official said Biden and Herzog did not discuss concerns about the potential implications of right-wing extremists in the Israeli government, noting that the Americans are preoccupied with their own politics.

Herzog said he and Biden also discussed the maritime border agreement with Lebanon, regional integration and normalization. Biden praised Israel for agreeing to the deal.

“I think it’s a historic breakthrough. It took a lot of courage for you to step up,” Biden said. “It takes real guts and I think it took principle and persistent diplomacy to get it done. And I compliment you and I compliment the government.”

A White House readout following the meeting noted the deal would “harness vital new energy resources for the world.”