The Israeli president met with Jewish leaders, the secretary of state and House leadership, and participated in an Abraham Accords forum 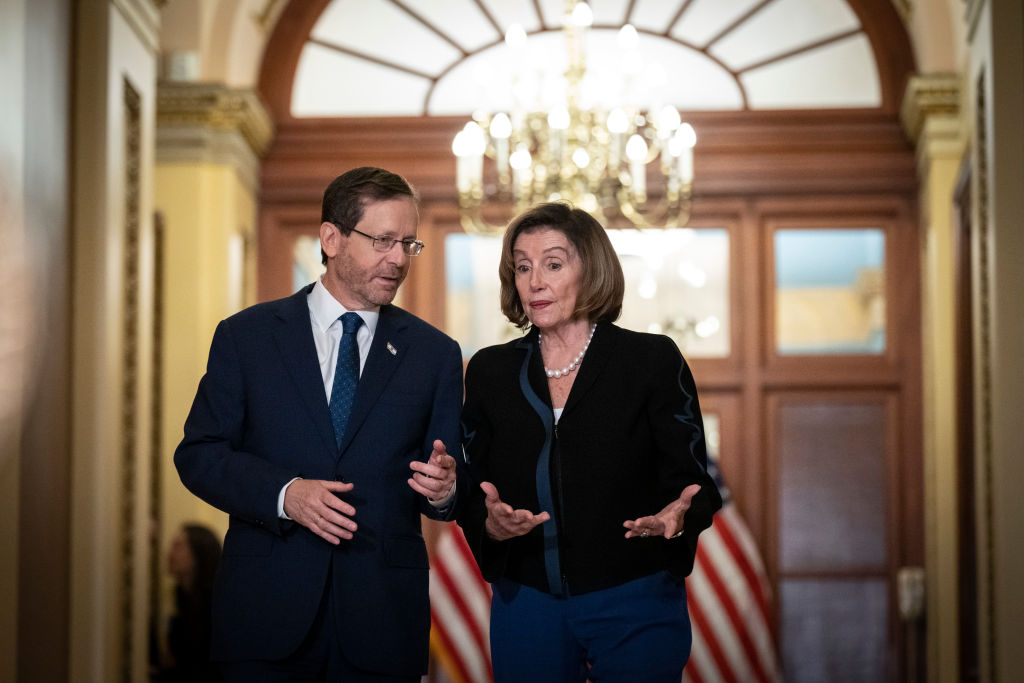 Israeli President Isaac Herzog and Speaker of the House Nancy Pelosi speak with each other as they arrive to deliver remarks to the press before their meeting at the U.S. Capitol October 25, 2022, in Washington, D.C.

Israeli President Isaac Herzog focused on Arab-Israeli normalization and the Iranian drone threat to Ukraine on the first day of a two-day visit to Washington, D.C, his first since being elected as Israel’s president.

Herzog met on Tuesday with leaders from the Jewish Federations of North America, the leadership of dozens of American Jewish groups, Secretary of State Tony Blinken and other senior State Department officials and House leadership, including House Speaker Nancy Pelosi (D-CA). He also participated in an N7 event cohosted by the Atlantic Council and the Jeffrey M. Talpins Foundation to discuss Arab-Israeli normalization.

During the event, moderated by former U.S. Ambassador to Israel Dan Shapiro, who oversees the N7 Initiative, Herzog expressed confidence that there will one day be a Middle Eastern treaty alliance, akin to the North Atlantic Treaty Organization.

“It may take a generation to get there, but we’re not far away on so many issues,” he said, particularly highlighting the region’s potential as a source for renewable energy.

Herzog described his trip earlier this year to the United Arab Emirates as an “eye-opener,” adding that “the enormous amount of energy, of joint projects and ideas that have emanated following these treaties is just incredible.” He also said he plans to visit Bahrain before the end of the year.

“I commend President Biden for taking that trip in the region including going to Saudi Arabia, because I truly believe that Saudi Arabia is a very important player in the region and also a very central pillar in the Muslim world,” Herzog said. “I say that from an Israeli perspective, not related to the American argument with Saudi Arabia these days, but I’m looking at the grand picture. It was an important step moving forward in many respects.”

Throughout the day, Herzog highlighted additional evidence that Israel has collected of Russia’s use of Iranian drones in its invasion of Ukraine, and said he plans to discuss the issue with Biden during their meeting on Wednesday. The comments come as Israel faces criticism from some in the U.S., as well as Ukrainian officials, for refusing to provide weapons to Ukraine.

“We all identify with the plight of citizens in Iran who wish simply to express their desires and liberties,” Herzog said. “And if you take this record of spreading terror, weapons, hate all around the region, and now try to apply it in Ukraine, you see that innocent civilians in Ukraine are killed and hurt and wounded and suffering from Iranian weapons.”

Herzog avoided specifically mentioning Russia, focusing his criticism on Iran, but said that “we object to any violation of Ukraine’s territorial integrity” and emphasized Israeli humanitarian aid to Ukraine.

The Israeli president noted that Israel has supplied civilian early warning systems for missile attacks, “but there are things that we cannot supply, due to our national security interests of utmost importance, and that is, by the way, the rule in many other countries.”

In public remarks before his meeting with American Jewish community leaders, Herzog issued a call for “respect” ahead of the upcoming Israeli elections and the 2022 midterms, which occur a week apart next month. Some Democratic lawmakers in the U.S. have raised concerns about the possible implications of advances for the far-right in Israel’s elections, but major U.S. Jewish and pro-Israel groups that expressed concerns about far-right factions prior to Israel’s 2019 elections have remained quiet on the issue this election cycle.

“We should both respect each other’s democracies. And we should respect the fact that Israelis will go next week to vote and make their decisions,” Herzog said. “And we should, of course, respect, Americans [who] are going to vote in two weeks time, because I know that there will be of course discussions about the outcome of each election once the respective elections [are over]. But first and foremost, the underlying rules should be [that] we all love and respect democracy.”

“My presence here during this politically sensitive time, both in Israel and in the United States, is intended to underscore that our alliance is above all politics. And it transcends all governments and political disagreements,” he said. “I’m here in order to reaffirm the close and deep friendship between us, that will continue whatever the results of the elections in Israel or in the United States.”

While Congress is currently out of session, Pelosi and Senate Majority Leader Chuck Schumer (D-NY) invited Herzog back to the U.S. to address a joint session of Congress in honor of the 75th Anniversary of Israel’s founding, on an as-yet-unspecified date.

Israel’s relationship with the Palestinians largely took a backseat during public sessions on Wednesday, although Secretary of State Tony Blinken said the U.S. has “real concern” about ongoing violence in the West Bank, adding that, “we’re urging everyone to take the necessary steps to try to de-escalate that violence and to avoid actions or statements that would incite it.”

Asked by Shapiro about the prospects for renewed peace talks between the Israelis and Palestinians, Herzog said that “it’s complicated” by divisions between Palestinians in the West Bank and Gaza, terrorism targeting Israel over the past year and Israel’s own political instability.

“But naturally when we live side by side with another people, another nation, we should strive to find ways to have a dialogue on all the topics, and I personally always welcome any opportunity to speak to my Palestinian neighbors,” he continued. “And I’ve said it also to [Palestinian Authority] President [Mahmoud] Abbas when I spoke to him recently, as he called to congratulate me for Rosh Hashanah.”
Herzog also thanked U.S. officials during the Atlantic Council session for their work toward adding Israel to the Visa Waiver Program, emphasizing that “we are looking forward to getting this completed.”