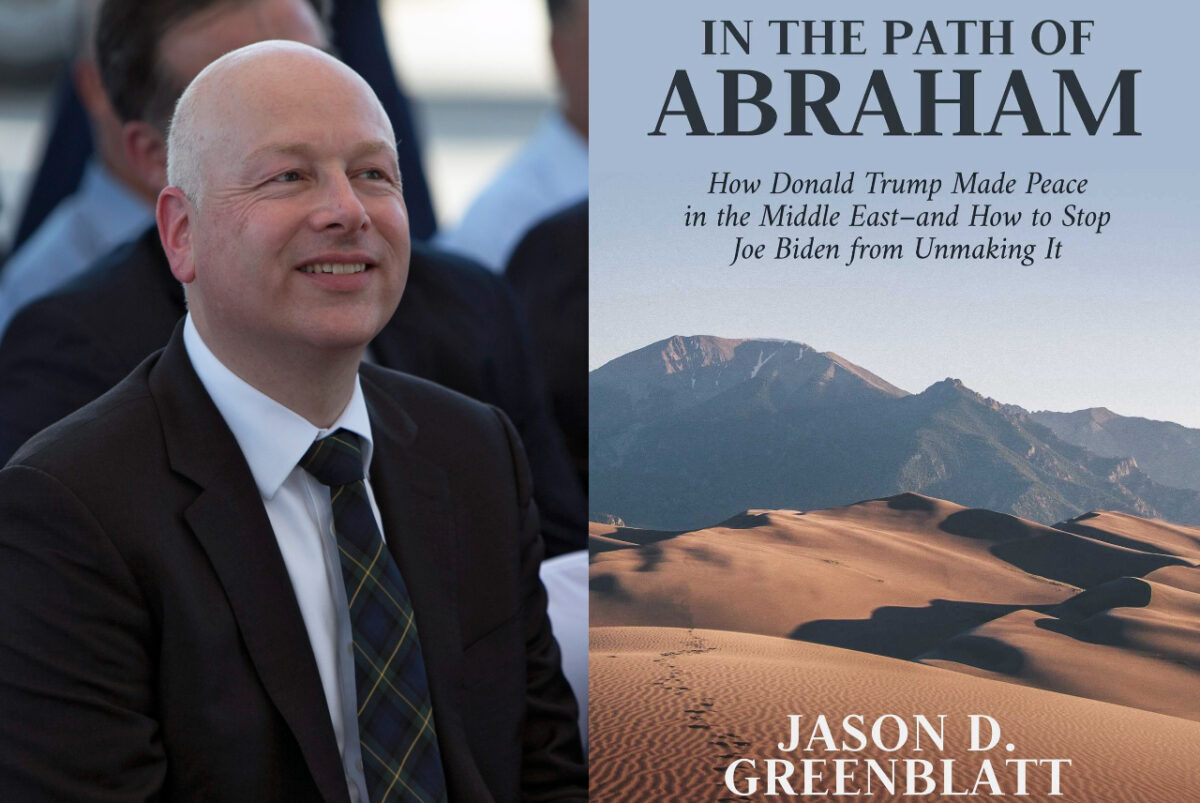 Opining about the Israeli-Palestinian conflict is a cottage industry in Washington, D.C. There are analysts galore, academics, former peace negotiators, think tankers — many appearing as talking heads on TV and writing sharp op-eds on how to resolve the intractable conflict.

And then there was Jason Greenblatt, fresh from the Trump Organization’s legal team and with no political experience recruited by former President Donald Trump to help bring peace to the Middle East.

Now, the ultimate outsider, who served for almost three years as Trump’s Middle East peace envoy, has gotten the last word over Beltway experts in the form of a new memoir, which hits bookstores today.

Unlike other Trump memoirs packed with lurid details about a sometimes chaotic administration, In the Path of Abraham: How Donald Trump Made Peace in the Middle East — and How to Stop Joe Biden from Unmaking It describes a level-headed policy process and skips juicy anecdotes for a reasoned explanation of Trump’s decisions.

“There’s a lot of myths about the Israeli-Palestinian conflict that I wanted to set straight,” Greenblatt told Jewish Insider. “I also want to explain a lot about how we came to our policy decisions, President Trump’s policy decisions, and the road, often many twists and turns, that lead us to the eventual peace proposal that President Trump released and then later the Abraham Accords.”

Arriving in Washington without prior experience in politics or diplomacy, Greenblatt, who now serves on the Republican Jewish Coalition’s board of directors and runs an Israeli crypto investment fund, fit into the “outsider” mold embraced by Trump during his campaign.

“I don’t make any secret about me being an outsider,” said Greenblatt, 55, who described his “sincerity” and “devotion to the cause” as qualifying characteristics for picking up the Middle East portfolio.

“They wanted to get advice from people who loved Israel and supported Israel, which is why they tapped me and David Friedman to become his advisors on Israel during the campaign, and then after he won, he brought me into the White House together with Jared [Kushner],” Greenblatt said. Friedman would become the U.S. ambassador to Israel.

In the book, Greenblatt criticizes the “Washington consensus” with which Trump broke on much of his Middle East policy, explaining that Beltway insiders have failed to resolve the decades-old Israeli-Palestinian conflict.

“I don’t think there is an Israeli-Palestinian expert,” he said.

Greenblatt’s memoir praises Trump’s significant policy decisions, including the decision to relocate America’s embassy from Tel Aviv to Jerusalem — a decision he wrote was “righting an historical wrong” — and America’s recognition of Israeli sovereignty over the Golan Heights.

“I think the policies are consistent and remain consistent in my view,” said Greenblatt. “I don’t think we’ve made errors.”

Greenblatt steers clear of making disparaging claims about his colleagues in the Trump administration and his counterparts in Israel, saving his criticism for Palestinian leaders, such as peace negotiator Saeb Erekat, who died in 2020 (“a master propagandist whose volatile temper could flare with an ill-perceived word or phrase”) and Obama administration officials such as former CIA Director John Brennan, whose reaction to the embassy move Greenblatt compared to the response of the ayatollah of Iran.

The crowning achievements of Trump’s Middle East policy — the Abraham Accords, which opened up relations with Israel and several Arab countries — concluded after Greenblatt left the administration in October 2019, but Greenblatt catalogs the decisions that led to the historic deals.

The Abraham Accords, he suggested, were made possible by “shifting forces in the Middle East” in addition to decisions made by the Trump administration.

Critical to the Accords’ success was the decision to pursue “parallel tracks” of diplomacy with the Palestinians and with Arab countries, so that Israeli-Arab reconciliation was linked to but not contingent on a resolution to the Israeli-Palestinian conflict.

“We were still going to pursue peace and see where it led,” after the Palestinians had left the negotiating table, Greenblatt explained.

“We are the first administration to ever release a very extensive, detailed plan, some 60-plus pages, that goes beyond the phrase ‘two-state solution’ and goes beyond the Arab Peace Initiative,” Greenblatt explained, referring to the 2002 peace plan released by a number of Arab countries. The Trump plan included both an economic component released in 2019 that featured financial investment in a future Palestinian state and a political component released in 2020.

“Yes, [our plan] failed, but I still think it serves an important purpose,” Greenblatt added.

Greenblatt said he would consider working for Trump again, as rumors swirl that the former president may run for reelection in 2024.