in a new york minute 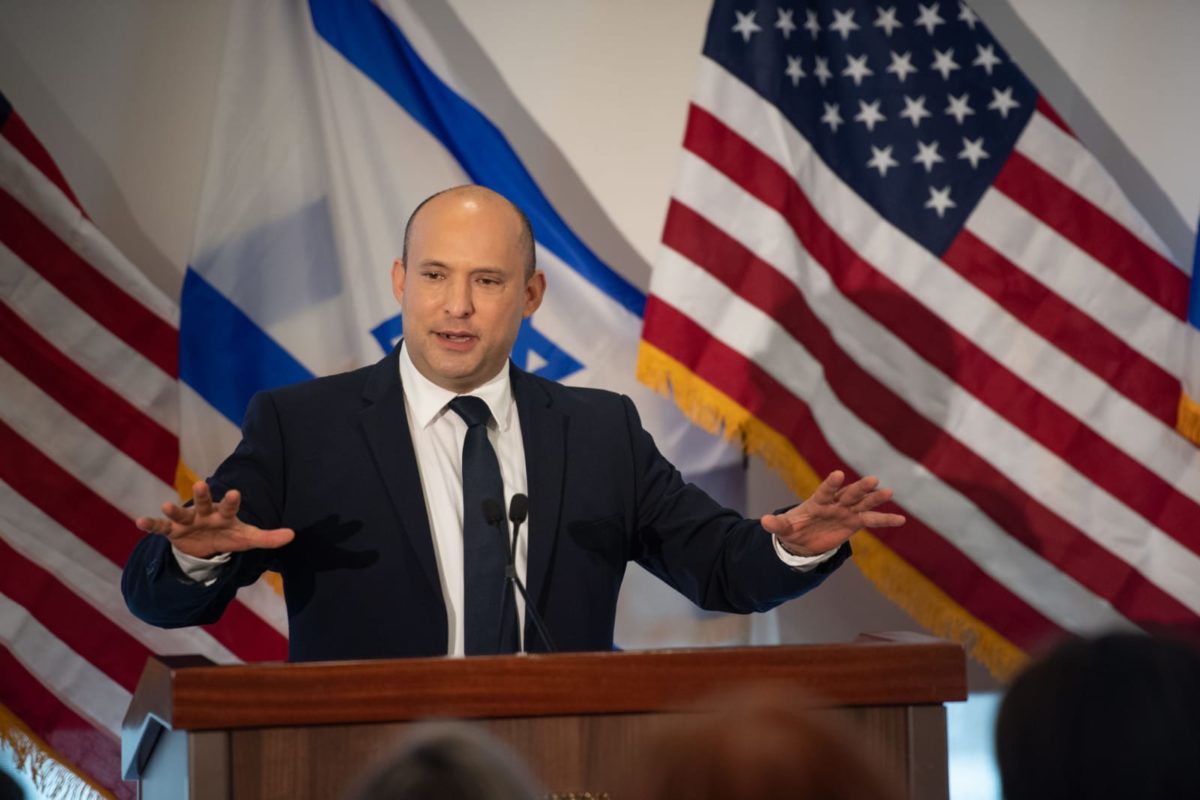 Israeli Prime Minister Naftali Bennett speaks about the U.S.-Israel relationship at an event hosted by The Jewish Federations of North America on Monday, Sept. 27, 2021.

Speaking to Jewish leaders at an event hosted by The Jewish Federations of North America on Monday afternoon in Manhattan, Bennett addressed the House of Representatives vote last Thursday to approve a $1 billion replenishment of the system in a 420-9 vote, saying he was “very happy” with the outcome.

“It’s not only about the fact that Iron Dome is defensive. It’s broader than that,” he said, recalling his own experience on Sept. 11, 2001, when he was running a hi-tech company in Manhattan and evacuated his employees following that morning’s terror attack.

Bennett highlighted the security relationship between Israel and the U.S. during his remarks to Jewish communal leaders, and the importance of Israel’s position in the Middle East. “We are nine million [the approximate population of Israel] boots on the ground. We are fighting. We are day in, day out in touch with those terrorists. We’re gaining intelligence, methodologies. We’re fending them, without ever asking America to send one troop. And we never will,” he said, noting that Israel’s security apparatus has helped allies locate terror threats in their own countries. “We’re not the problem. We’re the solution.”

Bennett’s address received accolades from American Jewish leaders. “He seems to have a deep understanding of the American Jewish psyche, as well as the diversity of our community,” William Daroff, CEO of the Conference of Presidents of American Jewish Organizations, told JI. “The prime minister’s experience as diaspora affairs minister, and as a U.S.-based high-tech entrepreneur businessman provides him with unique insight into our community.”

In his inaugural address to the United Nations General Assembly as Israel’s prime minister earlier in the day, Bennett emphasized the ongoing threats posed by terror groups, noting that “they all want to destroy my country. And they’re all backed by Iran.”

Bennett’s U.N. speech largely focused on Iranian threats in the region, drawing attention to the Islamic republic’s deployment of unmanned aerial vehicles (UAVs) that have targeted Saudi, U.S. and Israeli interests in the Middle East, including the recent attack on an oil tanker that killed two people.

He didn’t mention the Israeli-Palestinian conflict or the peace process in his U.N. address — an absence swiftly picked up by critics and the media.

“He’s a manager – arguably the weakest prime minister in Israel’s history — thinking short-term rather than into the distance about how Israel manages the one issue that could change its character,” Aaron David Miller, a senior fellow at the Carnegie Endowment for International Peace, told JI. “For now, Bennett has secured his U.S., Egyptian and Gulf state flanks. That’s all the foreign policy he thinks he needs now.”

Earlier Monday, Bennett met with U.N. Secretary-General Antonio Guterres. On Monday afternoon, he met with U.S. Ambassador to the U.N. Linda Thomas-Greenfield, who accepted an invitation from Bennett to visit Israel. That evening, he spoke at Congregation Kehilath Jeshurun on Manhattan’s Upper East Side.

The Israeli prime minister returned to Israel on Wednesday.