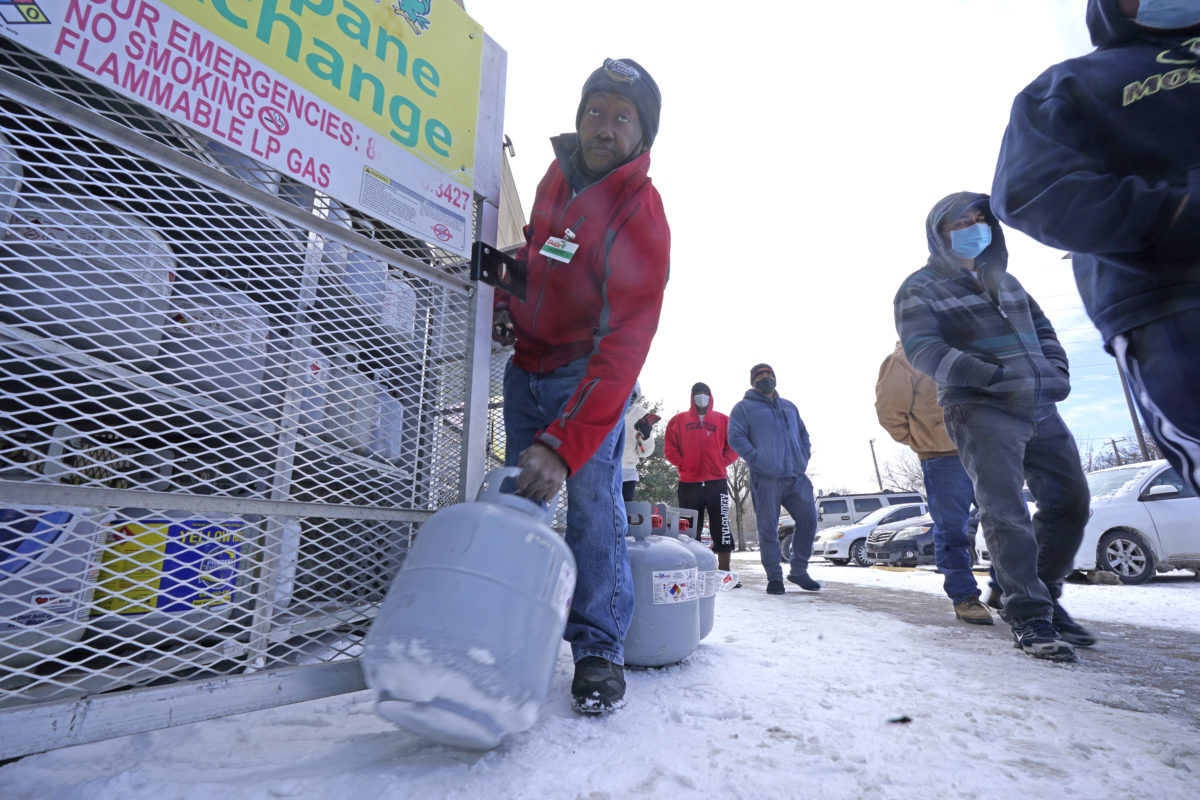 Robert Webster pulls a full canister of propane for sale as customers line up to enter a grocery store Tuesday, Feb. 16, 2021, in Dallas.

Texans are facing a brutal winter storm that has frozen equipment at energy facilities across the country and shut off power to millions in the state, leaving residents struggling to stay warm in an area of the country that, this week, is colder than parts of Alaska.

“Everything comes in threes,” Mariam Shpeen Feist, the CEO of the Jewish Federation of Greater Dallas, told Jewish Insider Tuesday afternoon. First, she explained, was a 2019 tornado that destroyed the federation’s building and homes of members of the Jewish community. Six months later, the COVID-19 pandemic hit, paralyzing the country’s economy and infrastructure. Now, the cold has arrived.

Despite frigid temperatures that have already resulted in more than a dozen deaths across the state, Feist is trying to stay positive. The federation is working with local Jewish organizations to support community members through meal deliveries, temporary housing and providing supplies to keep warm.

This interview has been edited and condensed.

Jewish Insider: Do you feel as though anyone was prepared for this?

Mariam Shpeen Feist: It’s like asking, ‘Are you prepared for the pandemic or the tornado?’… I think yesterday was really a day of shock, because I don’t think anyone expected this. We expected the rolling blackouts, but they were promised to be 15 to 45 minutes at a time… Some people have not lost power at all, thank goodness. I understand from one of our city councilwomen, who is Jewish, I believe she said that those streets are places that have not lost power because the electric company or the fire [department], whoever it is, know that there are people on oxygen or other things that are keeping them alive on those streets. And that’s why they’re ensuring that those areas don’t lose power.

The rhythm that I’ve now seen [at home] since Sunday at 2 a.m. has been: We’re out about 12 hours at a time, and then we’re on for two hours. Off for 12 hours, on for two hours. I have other people on my team or people that we know in the community, they have maybe had four hours of any power since Sunday at 2 in the morning. I’ve got [people’s homes] where pipes are now bursting, so their houses are being flooded on top of the freeze. And there’s no place to go. There’s not a hotel room to be found that has power. There’s just not places to go. And so our JCC tried to be a warming center to open, but we [couldn’t] get the parking lot de-iced. We can’t get it safe.

People are really helping people. We have a ‘Dallas Jewish moms’ Facebook page — the outpouring of strangers literally telling strangers to come to their home, they’ll open up their homes for the babies, for the dogs, for the families. You know, it’s unbelievable. And this is Dallas. This is resilience and just people, they’re putting COVID as second. First is people’s lives. ‘Put a mask on and come to our house’ kind of thing. That’s what they’re dealing with. So it’s pretty incredible.

JI: What is the community doing to support those who are struggling this week?

Feist: Because [of] the pandemic, the federation organized what was called a health crisis management team. And that had rabbis who were the heads of our Rabbinic Association of Greater Dallas, the head of Chabad, and the head of the Orthodox rabbis, and our largest CEOs of our largest agencies, like our JCC, our senior housing, and so forth. So we have the infrastructure. [On Monday], we were all so much in shock that today we started working on who’s open, who can be a warming center, what do we have, what’s happening. We’re just all trying to coordinate with each other to make sure that people are safe… So synagogues are really banding together, where they’re not opening as much as they’re finding family, congregants who will take in other congregants or other Jewish congregants of other synagogues. We’re just all trying to band together to get through this.

JI: What are some of the different needs now?

Feist: So right now, for example, today, one of the kosher restaurants and grocery stores [Kosher Palate] organized free food at two different spots in South Dallas. So we’re working with them, the Dallas Jewish community, the federation and the Dallas Jewish Community Foundation, to help fund those meals for the next two days. Because within two days, we should be in better condition. You know, we’ll reconvene in 48 hours, but Saturday, it’s supposed to be 67 [degrees] and sunny here. So hopefully, we won’t be in the position that we’re in right now. So we’re going to help fund that as he’s working on that, working with all the synagogues. So the rabbis know and can get that information out to their congregants with discretion… But there are people that really have nothing to eat.

JI: Are you in contact with the other federations around Texas?

Feist: I think we’ve all been in so much shock that right now we’re trying to take care of our own community before we start to realize what’s going on everywhere else. So I’ve been in touch with [the director of the Jewish Federation of Greater Houston]. But unlike when Houston had a flood and we were able to deliver 30,000 kosher meals, you know, we can’t help, we’re in the same boat. And like when we had the tornado, they were the first ones to call to say, ‘What do you need?’ We’re both in the same boat now. We’re like the pandemic all over. It’s like the first time in history where Israel and all the Jews all over the world are going through the same crisis. Everyone in Texas is going through the same thing right now.

It’s very humbling to think that this is how a number of Americans live. It’s humbling to know that I’m lucky I have a roof over my head and I have food. So we worry about getting through the night, but so do millions of Americans every night, every day. We continue to count our blessings.