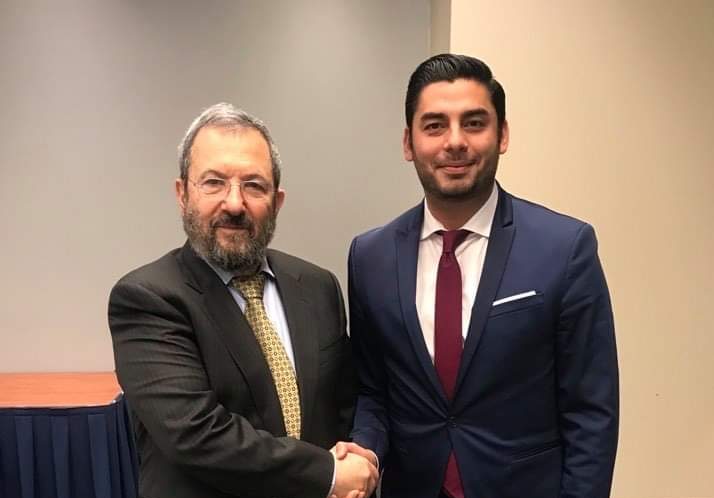 Ammar Campa-Najjar never imagined that he would come face-to-face with the man who, nearly 50 years ago, led the team of Israeli commandos that killed his grandparents. But last October, he found himself shaking hands with Ehud Barak, the former Israeli prime minister who carried out the covert mission during his time in an elite unit of the Israel Defense Forces.

Their hourlong meeting was one that Campa-Najjar, a Democratic congressional candidate in San Diego, says he won’t forget — and he believes their rapprochement carries implications for those who have concluded that there is little hope of finding a resolution to the Israeli-Palestinian conflict.

“What began as a conversation that could have been tense ended up being one of reconciliation and peace, which I felt was important,” Campa-Najjar recalled in his first public comments about the encounter during a recent interview with Jewish Insider. “It was a very cathartic experience.”

Those who are familiar with the story behind the raid will know that Campa-Najjar and Barak would, at first glance, have little reason to get along.

Campa-Najjar’s paternal grandfather, Muhammad Youssef al-Najjar, was a high-level Palestinian intelligence official who is believed to have helped orchestrate the 1972 Munich Olympics massacre. Barak led the raid to assassinate al-Najjar in his Beirut apartment in April 1973. Campa-Najjar’s grandmother was also shot and killed while attempting to defend her husband.

Their discussion took place behind the scenes during a J Street conference in Washington, D.C., according to Campa-Najjar, who said he requested the meeting and that Barak courteously obliged.

Barak did not respond to several WhatsApp messages seeking comment.

Initially, the mood was somewhat strained, Campa-Najjar recalled. “He was a general and prime minister, so he’s not one to just hold at niceties and pleasantries,” he told JI.

But then the conversation softened. “We talked about how he believed that a millimeter beneath our skin, we’re all the same, and he made this premonition that, one day, my generation and his grandkids will sit down at the table of peace and we won’t be able to explain even to ourselves why it took us this long,” he said. “Those sentiments I will carry for the rest of my life.”

The 31-year-old said he has never harbored any ill will toward Barak for his involvement in the raid, citing an interview in which his father, a former Palestinian Authority official who witnessed the assassination as an 11-year-old boy, declared that he had let go of the past.

“I can hate the Israelis or Ehud Barak forever, you know, and I’m entitled to,” Yasser Najjar told NPR in 2003. “He took everything from me, my mother and my father. But in the end, for my children to live, I have to put my hatred aside. If I carry this hatred, my children will kill and end up being killed — and as a father, I don’t want that.”

“If he could set his hate aside,” Campa-Najjar said, “I surely can.”

The feeling was mutual, according to Campa-Najjar, who says that Barak told him he should not be judged for the actions of previous generations.

“If he and I could sit down together and have hope for the future,” Campa-Najjar said, “then I think that says a lot for the two peoples in the region.”

Born in California, Campa-Najjar spent time living in Gaza as a child but is now estranged from his father, who lives in Norway, and says he has always felt a closer sense of connection to his Mexican-American mother.

Still, although he has condemned the Munich massacre, his grandfather’s history has caused controversy for him as he seeks public office. During his failed bid for Congress in 2018, Campa-Najjar’s opponent, then-Rep. Duncan Hunter (R-CA), released an attack ad tying Campa-Najjar to his grandfather and accusing him of harboring terrorist sympathies while “working to infiltrate Congress.”

This cycle, Campa-Najjar — who previously worked as a public affairs officer in the Department of Labor — is going up against former Republican Rep. Darrell Issa (R-CA) in California’s 50th congressional district, which includes a large swath of San Diego County.

And while Campa-Najjar holds up his encounter with Barak as evidence to suggest that the Israeli-Palestinian conflict is not as intractable as it may seem, he has found that it has been difficult to avoid conflict with his fellow Arab-American opponent in a race that has become increasingly acrimonious in the lead-up to the election.

Issa, who is of Lebanese descent, vowed that he wouldn’t go after Campa-Najjar using Hunter’s inflammatory rhetoric. Instead, he has sought to cast the Democratic congressional hopeful as anti-Israel. On Tuesday, Issa alleged on Twitter that his opponent was against a two-state solution to the Israeli-Palestinian conflict. “Oh, and you made an anti-Israel propaganda video with the PLO,” he added. “Yes, you don’t support Israel.”

Nick Allman, a spokesman for Issa’s campaign, told JI that Issa was alluding to a demo recording of a song called “Peace in Palestine” that Campa-Najjar posted on Kickstarter nearly a decade ago.

Campa-Najjar charged that Issa’s record on Israel was far more questionable, accusing his opponent of calling Israel an “apartheid state” and expressing sympathy for Hezbollah. Issa’s views on Israel have come under scrutiny this cycle thanks in part to a February attack ad from American Unity PAC highlighting several of his past comments that appear to be highly critical of the Jewish state.

Issa told JI in an April interview that such statements have been taken out of context. “I have a 100% pro-Israel voting record,” he said.

In questionnaires recently solicited by JI, both candidates adopted largely similar postures on Israel, expressing their support for a two-state solution.

“In my opinion, the basic parameters of a successful two-state solution would closely resemble President Clinton’s peace plan,” Campa-Najjar wrote in his questionnaire, arguing in favor of “a demilitarized Palestinian state in Gaza and approximately 97% of the West Bank, control of Islamic and Christian holy sites and a capital in East Jerusalem.”

But in a separate tweet earlier this week, Issa accused Campa-Najjar of being untruthful in his questionnaire. “I’ve been shown the WeChat,” Issa said mysteriously. “You owe the Jewish insider [sic] an apology for lying on their questionnaire. Telling Anti-Israel donors that you don’t take ‘Zionist Money’ is the kind of disgusting racist language that should have no place in our politics.”

Allman, Issa’s spokesman, claimed that on Tuesday an undisclosed source leaked the contents of a series of WeChat exchanges to the Issa campaign as well as to Breitbart, the far-right news site, purportedly showing Campa-Najjar engaged in conversations with “anti-Israel activists and donors.” Allman shared a text file of the messages with JI, though JI was unable to verify the authenticity of the file.

Campa-Najjar told JI that he is somewhat befuddled by Issa’s line of attack. “It’s weird,” he said. Still, he is optimistic that he can move past it by defeating Issa on November 3 and carrying to Congress the lessons he learned during his conversation with Barak.

Until recently, polling suggested that the race was competitive, but it now looks as if Issa has pulled ahead in the historically conservative district. A survey released this week puts Campa-Najjar at 40% among likely voters, 11 points behind his opponent.

Whatever the outcome, Campa-Najjar can at least rest assured that one conflict from his family’s history appears to have been resolved thanks to a chance meeting last year with a man he could easily have regarded as an enemy.

“It is a very good bookend to this whole saga surrounding my estranged grandfather, and the difference between my efforts and his,” Campa-Najjar said, “and how much something can change in a matter of generations.”