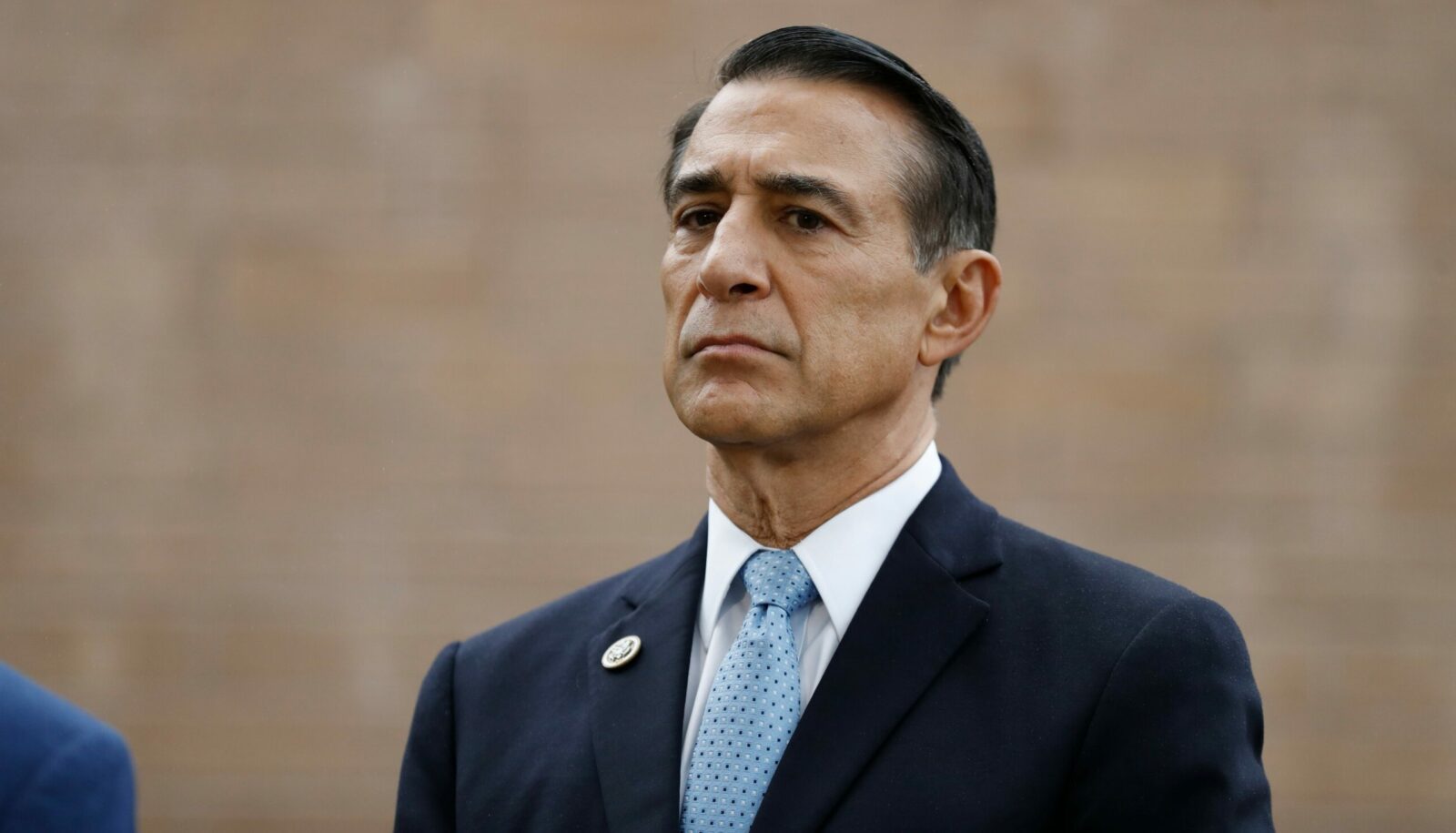 After more than a year in the political wilderness, the former California representative is attempting a return to Congress

Darrell Issa has occupied an unfamiliar role for the past year and a quarter: He hasn’t held elected office.

The former Republican representative, who served in Congress for nearly 20 years, chose not to seek reelection in 2018 when it looked as if voters in his Southern California district would elect a Democrat to replace him. Issa had planned to take over the U.S. Trade and Development Agency after vacating his seat, but his confirmation was stalled indefinitely in the Senate Foreign Relations Committee.

Now, Issa has his eye on Congress again as he mounts a comeback campaign for California’s 50th congressional district, which sits mostly in San Diego County. In a recent interview with Jewish Insider, Issa discussed his second act in politics.

The field: The 66-year-old Issa is going up against Ammar Campa-Najjar, a 31-year-old Democrat who worked in Barack Obama’s Labor Department. Campa-Najjar’s grandfather was a Palestinian intelligence official who is alleged to have helped plan the 1972 Munich massacre. In 2018, Campa-Najjar ran and lost to Duncan Hunter, who was recently sentenced to 11 months in prison for misusing campaign funds. Hunter used Campa-Najjar’s family history against him in an attack ad, but Issa — who is of Lebanese descent — made clear he has no intention of doing the same. “You mean, are two Arab-Americans going to call each other Arabs?” he asked rhetorically.

Fighting words: Not that he’s pulling his punches. Issa said he believes Campa-Najjar has yet to define himself in the traditionally conservative district. “The reality is that when you listen to him long enough, you realize that he’s a pretty mainstream Democrat in spite of what he’s saying.”

American disunity: During the primary, Issa was accused of “gay-baiting” for an ad that drew attention to the sexuality of his main Republican opponent, Carl DeMaio. Then in late February, Issa was on the receiving end of an attack ad from American Unity PAC, which resurfaced some of the former congressman’s past comments on Israel — including one in which he appeared to liken the country to an “apartheid” state.

Issa told JI the quotes were taken out of context. “I have a 100% pro-Israel voting record,” he said. “It’s not just me saying it. You can call my AIPAC reps.”

Background: The Cleveland-born car alarm mogul entered Congress in 2001. Issa points to, among other things, his cosponsorship of the 2012 United States-Israel Enhanced Security Cooperation Act as evidence of his support for the Jewish state. Throughout his long tenure, he served on the House Judiciary and Foreign Affairs Committees, and was chairman of the House Oversight and Government Reform Committee from 2011 to 2015. Issa represented California’s 49th congressional district before stepping down at the beginning of 2019. His old seat is now occupied by Democratic Rep. Mike Levin.

Peace plan: Issa told JI that he discussed Trump’s Middle East peace plan with the president’s son-in-law, Jared Kushner, before it was unveiled. “I talked a little bit about the trips that I’d made,” said Issa, who has visited the region numerous times. At the moment, the former congressman is pessimistic about the prospects for a resolution to the Israel-Palestinian conflict.

“I certainly hope for peace and plan for peace,” he said. “And this plan, like every other plan, has everything except a Palestinian Authority that can control its people or, if necessary, take on Hamas in an aggressive way.”

Aid to Lebanon: With regard to the U.S. funding of the Lebanese Armed Forces, Issa believes a balancing act is necessary. “What is the current status of the military?” he said. “Can we ensure that we’re not effectively arming Hezbollah?” He added that “some of what we get in return is always going to be highly classified,” suggesting that the pros and cons of such aid may not be immediately apparent to outside observers.

Frontrunner: Though DeMaio lost to Issa by just 3.4 percentage points in the jungle primary — a split vote that pushed Campa-Najjar to first place — experts predict the former congressman will come out on top in the November election. Even with potential complications from the coronavirus pandemic, it would be a “huge political upset” if Campa-Najjar were to defeat Issa, according to Thad Kousser, a professor of political science at the University of California, San Diego. Issa is “virtually an incumbent,” he said, with a “national profile” and “strong funding.”

Critique: Campa-Najjar takes issue with that claim. He accuses the former congressman of being an opportunist who quit on his old district and isn’t in touch with the concerns of his new constituents. Republican strategist Liz Mair, who helped work on the American Unity ad, echoed that assessment, telling JI that Issa “is seen as a carpetbagger.” (Issa owns homes in both the 49th district, which he formerly represented, and in the 50th district he is running to represent, though a spokesperson told JI his primary residence is in the 50th.)

Rebuttal: Issa rejected such a characterization as a “frivolous” attack. “It’s kind of humorous that we’re having a discussion about two San Diegans,” he said. Still, he boasted to JI that he moved to San Marcos in 1985, before Campa-Najjar was even born. “I have been a resident of this district,” he said. “I have represented a third of this district at various times.”

Looking ahead, Issa was confident he would return to office after a brief interregnum. “I’m going to do more of what I did for 18 years, but I’m going to do it with the advantage of experience,” he told JI. “I know what works and what doesn’t.”