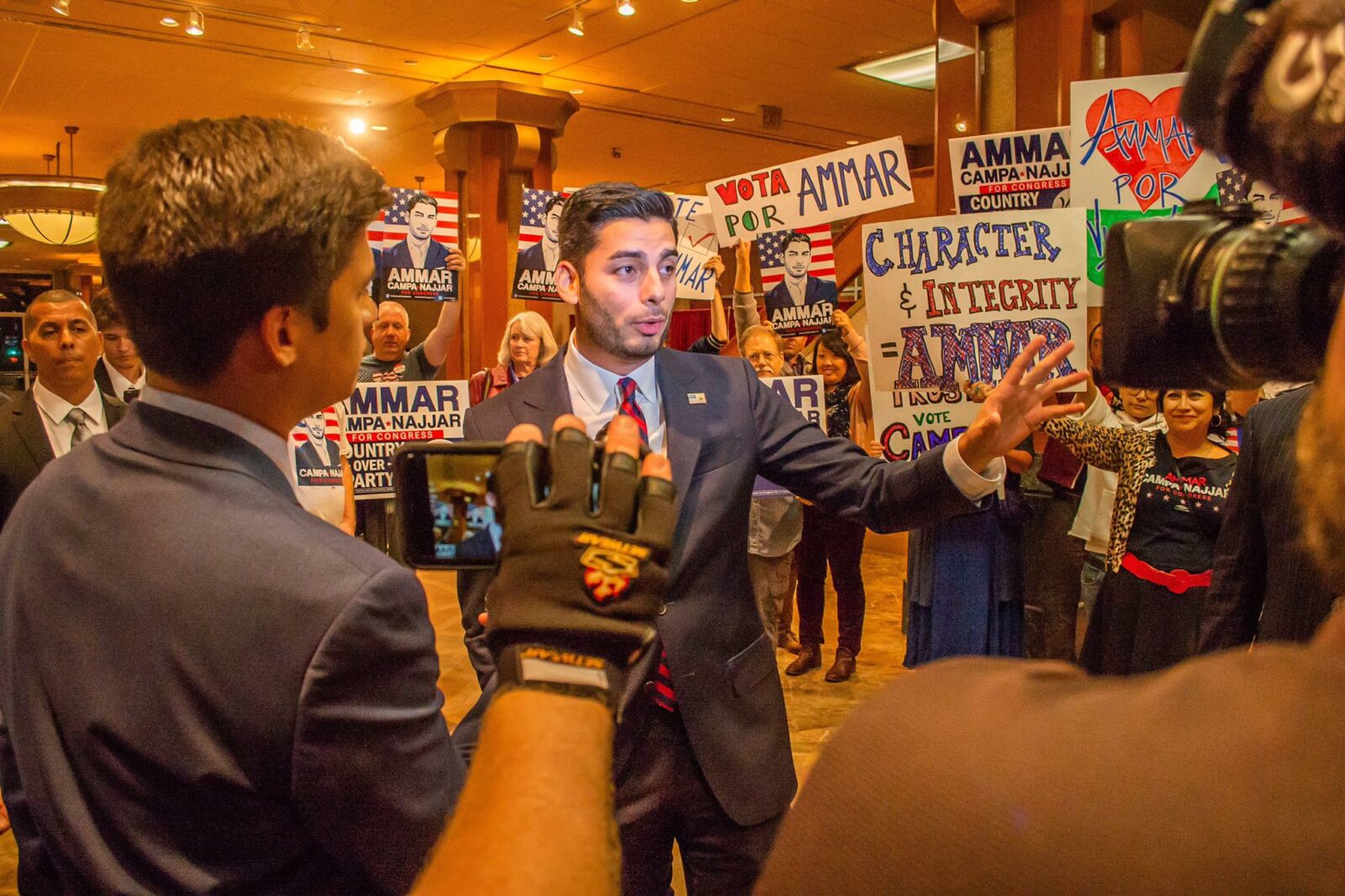 Born in California, raised in Gaza — will San Diego send this millennial to Congress?

Ammar Campa-Najjar was only 8 years old when he moved to Gaza with his mother and brother in 1997, on the eve of the second intifada. But he soon discovered that he would not be treated as just a boy. Though his father worked for the Palestinian Authority — the reason his family had relocated from California — Campa-Najjar was regarded with suspicion by his peers for the simple reason that he was, first and foremost in their eyes, an American.

“I was an outsider,” he recalled in a recent interview with Jewish Insider. “Even when I was in the middle of that conflict experiencing it from the Palestinian perspective.”

That liminal sense would only intensify when Campa-Najjar moved back to California just before the the September 11 attacks.” In the United States, he was seen as insufficiently American because of his Arab roots, despite a strong sense of identification with his mother’s Mexican heritage. But rather than embittering him, his experiences seem to have imbued Campa-Najjar, now 31, with a unique sense of equanimity that has served him well as he runs for Congress as a Democrat in a reliably red district in Southern California.

His fortitude was put to the test two years ago during his first run for a seat in the 50th congressional district, which mostly encompasses parts of San Diego County. During that race, Republican incumbent Duncan Hunter used xenophobic rhetoric to attack Campa-Najjar as a terrorist sympathizer “working to infiltrate Congress.” Hunter’s evidence for this baseless claim was that Campa-Najjar’s paternal grandfather was — as Haaretz reported at the time — a Palestinian intelligence official who helped orchestrate the 1972 terrorist attack on the Munich Olympics. He was assassinated in 1973 by Israeli commandos in retaliation for the attack, though his involvement has been disputed by Israeli journalist Ronen Bergman.

Campa-Najjar unequivocally condemned the massacre — and the campaign attack was denounced by a group of local rabbis — but still lost the election. This time around, however, Hunter is out of the picture: He resigned from Congress in January after pleading guilty to stealing campaign funds and last week was sentenced to 11 months in prison.

Now that the seat is open and the battle with Hunter is behind him, Campa-Najjar is operating with a renewed sense of momentum. He feels that his past experience as a field director for President Barack Obama’s re-election campaign and as an official in the Labor Department — coupled with his longstanding ties to the area — place him in a prime position to turn the district blue in November.

“A lot of voters see themselves in me now in a way that they didn’t really last time,” he said. “I think that’ll help us out a lot.”

Thad Kousser, a political science professor at the University of California, San Diego, agreed with that assessment. “He’s done a spectacular job of overcoming an initial impression with voters who would treat him as quite foreign to the district,” said Kousser.

Still, the candidate remains an underdog in the traditionally conservative district, and experts doubt he has the wherewithal to best his more established Republican opponent: Darrell Issa, attempting a return to politics after choosing not to seek re-election in 2018 in the neighboring 49th district, when it became clear he could lose his seat to a Democrat.

It won’t necessarily be smooth sailing for Issa, whose political career has foundered in recent years. He was chosen by President Donald Trump to lead the U.S. Trade and Development Agency in 2018, but his nomination was delayed in the Senate Foreign Relations Committee over an issue with his background check, and he was never confirmed.

Issa, the 66-year-old former representative, entered the race last fall with a plan to unseat Hunter, but his main opponent in the primary was Carl DeMaio, an openly gay Republican who lost to Issa by a slim margin. The split vote gave Campa-Najjar a first-place showing in the jungle primary.

For Campa-Najjar — a native of the district who casts himself as an East County son in tune with his constituents’ values — Issa’s campaign is nothing more than an opportunistic ploy to get back to Washington. “He quit on his district,” Campa-Najjar said of his fellow Arab-American opponent. “The 50th is his backup plan.”

Republican strategist Liz Mair echoed that sentiment. “He is seen as a carpetbagger,” said Mair, who worked on a recent ad for American Unity PAC that scrutinized some of Issa’s past remarks on Israel. Though Issa has positioned himself as a staunch ally of the Jewish state, some of his past comments resurfaced in the ad — likening Israel to an “apartheid state” if a peace process were abandoned — suggest that he has not always been so supportive. (Issa did not respond to a request for comment.)

Campa-Najjar said there has been no such flip-flopping on his part. He hopes, if elected, that his first-hand experience of the Israeli-Palestinian conflict will lend him “moral authority and credibility” on the issue. He supports a two-state solution that harkens back to the parameters established during the Clinton presidency, backing a plan that would, among other things, establish a Palestinian state in Gaza and approximately 97% of the West Bank and give the Palestinians a capital in East Jerusalem.

Campa-Najjar seems to feel a sense of camaraderie with the Palestinians — even if he is estranged from his father, Yasser Najjar, once regarded as a young reformer in the Palestinian Authority who now works as an investment consultant in Norway. Campa-Najjar believes the Palestinian leadership has been intransigent through the years, which he fears will leave the Palestinians with nothing if they refuse to make concessions in future negotiations.

“It’s turning into where these Palestinian territories are like Native American tribes,” he said, “little statelets in the grander part of Israel.”

Instead, he favors a kind of tough love, arguing that he supports restoring aid to the Palestinian Authority only if it is used to help rebuild civil society for the Palestinians and not in the service of violence. Campa-Najjar said he believes Israel should continue to receive foreign aid — an investment, he said, that gives the U.S. some leverage when it comes to negotiating with a country that he regards as a key ally.

He has been to Israel, but plans to return if he makes it to Congress. “It would be a great spiritual experience for me,” Campa-Najjar told JI, crediting his decision to seek elected office to his Christian faith.

Campa-Najjar’s district includes the city of Poway, where last Passover a man armed with an assault rifle opened fire inside an Orthodox synagogue, killing one and injuring three. “I was there grieving with the community for weeks,” he said, adding that he was “deeply, deeply concerned” about the rise of antisemitism in the U.S.

With that attack in mind, Campa-Najjar has outlined legislation he intends to pass if elected to Congress, including a provision that requires tech companies remove content that radicalizes users toward hate-based violence. He went out of his way to reject the notion that banning assault rifles would make any meaningful difference in the effort to eliminate mass shootings — one of a number instances in which the young candidate appears to have calibrated his political views to match the mood of the conservative-leaning district.

If Campa-Najjar has any hope of winning, experts say, he will have to appeal to independents and moderate Republicans who wouldn’t normally vote for a Democrat — and several of his statements suggest he is operating with that aim in mind.

For example, he takes a somewhat hawkish stance when it comes to foreign policy in the Middle East, endorsing — at least in hindsight — the president’s decision to assassinate Iranian General Qassim Soleimani.

“There’s some things that I agree with the president on,” he told JI, adding that he was “not afraid or nervous” about praising Trump when he felt the support was merited. Campa-Najjar has refused to answer definitively whether he would have voted to impeach the president, having described the trial as “unfair and partisan.”

Whether those are his real views or if he has devised them in an effort to become a more palatable candidate in the conservative district is an open question, said Evan Crawford, an assistant professor of political science and international relations at the University of San Diego.

Brian Adams, a political scientist at San Diego State University, points to Campa-Najjar’s inexperience as a reason for his inconsistent views. “It’s unclear to me what strategy he’s taking,” Adams told JI.

Campa-Najjar rejects the idea that he is in any way pandering to his constituents. “I think a lot of voters know that I’m not just a dyed-in-the-wool, party-line Democrat,” he said. “They know I’ll break rank when it comes to serving my district.”

That was evident on Tuesday — at least for a moment — when Campa-Najjar tweeted criticism of the coronavirus stimulus bill only to later delete the message. Such actions, Adams argued, show that Campa-Najjar has yet to define himself.

So far, it isn’t clear if Campa-Najjar is a Doug Jones or Joe Manchin type, Adams said, referring, respectively, to the Democratic senator who represents deep-red Alabama but still consistently votes along party lines, and the West Virginia Democratic senator whose constituents are sympathetic to Trump and who doesn’t always adhere to party orthodoxy.

Still, such issues don’t seem to have bothered those who have endorsed the candidate, including California Reps. Adam Schiff and Mike Levin, who now occupies Issa’s old seat in the 49th district.

“It’s long past time for principled, independent leadership in the 50th District, and there’s no better person to provide that leadership than Ammar,” Levin told JI in an email. “He knows the challenges that East County working families face because he and his family are one of them.”

In many ways, the ambiguity some experts have come to associate with Campa-Najjar’s campaign feels appropriate in light of his narrative.

After all, the American-born son of Mexican and Palestinian descent who was born in La Mesa and speaks Arabic, English and Spanish — and is currently learning Hebrew for his Jewish girlfriend — has always struggled to fit in.

“It’s been tough,” he said. “Imagine being called a terrorist while running for office in your hometown. It’s not the most pleasant experience. But as challenging as it is, it’s been more rewarding, and I feel like it is my calling. That’s the only reason I’ve stuck with it.”