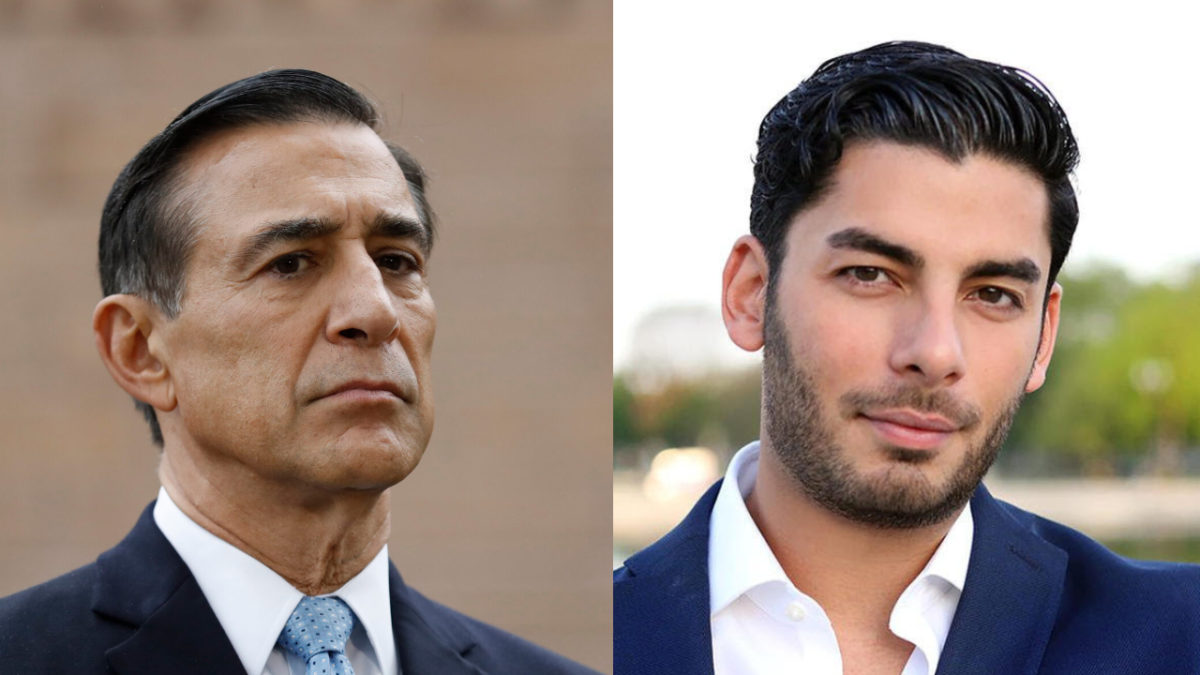 Former Rep. Darrell Issa and Ammar Campa-Najjar are engaged in a contentious battle for the open seat in California’s 50th congressional district, which includes a large swath of San Diego County. But despite clear political differences, the candidates appear to be in agreement on some issues relating to Israel, according to questionnaires solicited by Jewish Insider.

Issa and Campa-Najjar both support a two-state solution to the Israeli-Palestinian conflict and believe the United States should maintain foreign aid to Israel.

“Almost all U.S. aid to Israel is now in the form of military assistance,” Issa told JI in his questionnaire. “This assistance should continue. Israel is the region’s only democracy; long-term regional stability in the Middle East will only be possible if Israel remains a decisive military ally.”

Campa-Najjar agreed. “The United States enjoys an important relationship with Israel when it comes to military cooperation and intelligence gathering, both within the region and as far-reaching as intel on Russia and other geopolitical opponents,” he said in his questionnaire. “I believe the assurance of funding allows the United States to have tough conversations with our allies in the region, including Saudi Arabia and Israel, on how to pursue peace and prevent further national security risks to the United States emanating from the region.”

Still, the candidates differ on key issues. Issa, for his part, opposes former President Barack Obama’s Iran nuclear deal, known formally as the Joint Comprehensive Plan of Action (JCPOA), while Campa-Najjar argues, with some reservations, that the agreement was a net positive for international diplomacy.

“I believe a nuclear Iranian regime, which is a known state sponsor of terror is a threat to Israeli and American security,” said Campa-Najjar, adding, “Nevertheless, we know that the JCPOA — flawed as it was — effectively delayed the threat of a nuclear Iran. A top priority of mine in Congress will be to assure all nuclear capabilities from Iran are blocked, including its ballistic missile capabilities. As such, I would support the United States rejoining its allies and Iran in an updated deal.”

Issa, however, was vociferous in his distaste for the deal, which was abandoned by President Donald Trump in 2018. “Israel and the United States must now work together to reverse the damage the JCPOA did to global security,” said Issa, the former Republican congressman who in 2018 vacated his seat in California’s 49th district after it became clear he was likely to lose to a Democrat.

Now, the 66-year-old veteran politician — who had planned to take over the U.S. Trade and Development Agency after leaving Congress but whose confirmation was stalled indefinitely — is competing against a rookie who has never held elective office.

But Campa-Najjar, 31, has certainly put up a fight. The former Obama administration alumnus has taken a somewhat heterodox approach in his election effort as he goes up against a tried-and-true conservative in the historically red 50th district.

Campa-Najjar has expressed reservations about Trump’s impeachment, for example, and has adopted somewhat hawkish foreign policy stances — at least for his party — having endorsed Trump’s decision to assassinate Iranian Gen. Qassim Soleimani in January. “There’s some things that I agree with the president on,” he told JI in a March interview.

The race is unique for the district in that it pits two Arab-American politicians against one another. Issa is of Lebanese heritage, while Campa-Najjar is of Mexican and Palestinian descent. Campa-Najjar, who was born in California and raised in Gaza, is the son of a Palestinian Authority official; his grandfather was a Palestinian intelligence official who is believed to have helped arrange the 1972 Munich massacre, though his involvement is disputed.

Campa-Najjar, who ran for the seat last cycle but lost 52-48% in the general election, has condemned the massacre.

The 50th district includes Poway, the site of an attack last Passover in which a man opened fire inside an Orthodox synagogue, killing one and injuring three. Both candidates addressed the rise of antisemitism in their questionnaires, but with contrasting styles.

“As a Christian of Palestinian descent, I believe that it is imperative to ensure everyone is treated fairly and justly, including the Jewish community who are [the] longest oppressed in history,” said Campa-Najjar. “In Congress, I hope to address this issue by not only protecting Jewish Americans but also advocating for a two-state solution to resolve the Israeli-Palestinian conflict.”

Campa-Najjar believes antisemitism emanates from the right and the left, but reserves some of his strongest criticism for Trump, whom Campa-Najjar takes to task for his response to the violent white supremacist riots in Charlottesville in 2017. “It was disheartening to see President Trump assign moral equivalence to that fateful day and say that there were ‘very fine people on both sides’ of the scenes that weekend,” Campa-Najjar said, going on to lament the Poway shooting.

“While these are the most violent displays of antisemitism today, hate speech and antisemitism against the Jewish community takes on more common forms in everyday political life from both parties,” Campa-Najjar added. “In 2018, Republicans in Alaska, Washington state, Connecticut, Pennsylvania, North Carolina and California ran political mailers showing Jewish Democrats with fistfuls of cash. Similarly, Democrats have also launched attacks against Jewish candidates calling them ‘untrustworthy elitists seeking to control the world,’ accusing them of dual loyalty to this country and painting them as money interested people with a secret agenda against America. I condemn those tropes that have been levied by some amongst my party.” (Campa-Najjar did not refer to any Democrats in particular, nor did he specify where the quote came from.)

Campa-Najjar redirected his critique toward Issa, accusing his opponent of ignoring antisemitic incidents in the distict.

“One of my proposals to address these issues is to educate the American people about the Holocaust and to inform them how the sentiments of antisemitism that claimed the lives of six million Jews under Nazi Germany still persists today in our nation,” Campa-Najjar told JI. “In fact, in my district, a man was driving around town with a large swastika flag waving over his truck. I immediately condemned this act and many others like it, while my opponent has been silent and reluctant to address some of the other high-profile cases of white supremacy that have occurred in our district, including a grocery shopper who donned a KKK hoodie in broad daylight. I believe silence in the face of these overt displays of antisemitism is complicity, and I will not condone that dereliction of moral obligation.”

Issa, who served in Congress from 2001 to 2019, did not directly address Campa-Najjar in his questionnaire, but he did set his sights on the Democratic Party, claiming that it has “been taken over by anti-Israeli and antisemitic forces.”

“I was stunned when President Obama, supported by Democrats in Congress, risked Israel’s safety and security by forming the horrible JCPOA,” said Issa.

He added, “On the other hand, Republicans were virtually unified in our opposition to the JCPOA — this was to be expected. From the moment I took my congressional seat in 2001, it was clear to me that support for Israel and the Jewish people is a top priority for the Republican Party. During my first term, I worked closely with my fellow freshmen [Reps.] Mark Kirk and Eric Cantor, both of whom later entered party leadership as a Senator and the House Majority leader respectively, to send pro-Israel legislation to President [George W.] Bush’s desk.”

Despite Issa’s established presence in the region, recent polls have suggested that Campa-Najjar may be a formidable opponent. One from a Republican pollster, first reported by Politico, put Campa-Najjar three points ahead of his opponent with 42% of the vote. A separate internal poll from Campa-Najjar was slightly less favorable for the young candidate, placing him four points behind Issa, with 47%.