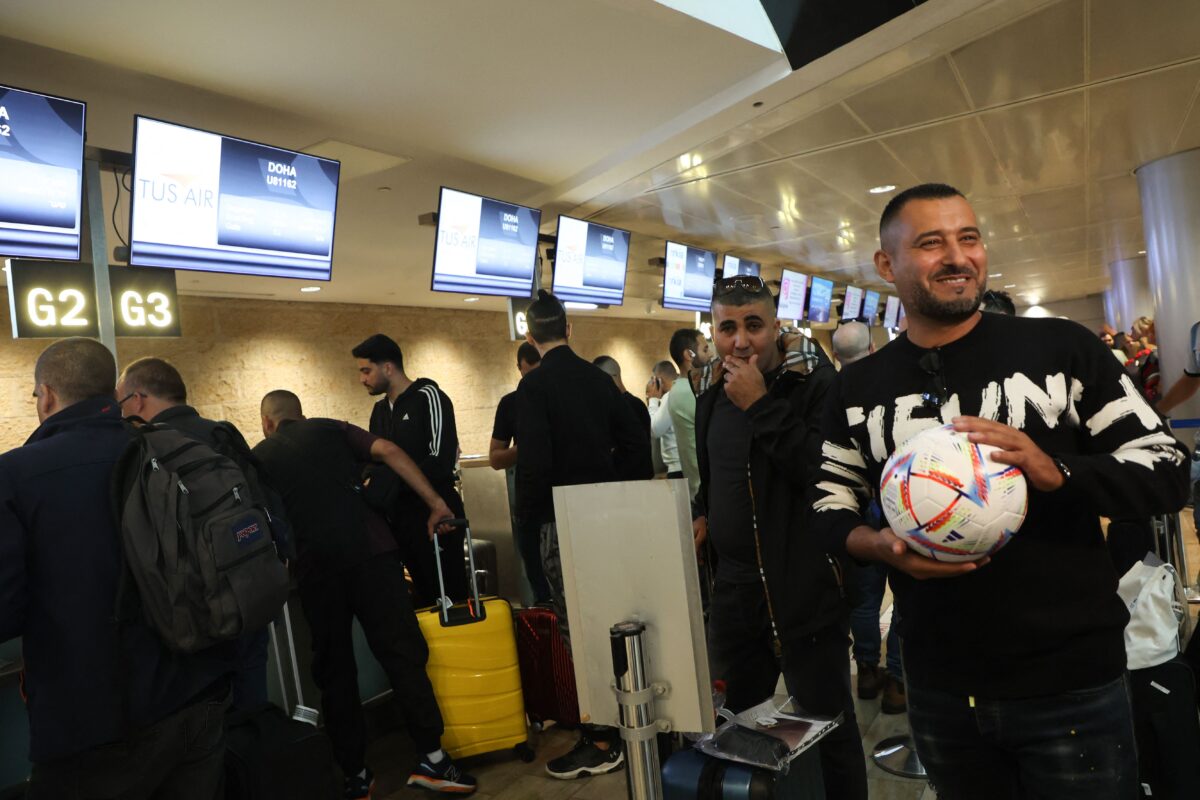 Football fans check in at a Tus Air counter in Israel's Ben Gurion international airport, for a flight to Doha to attend the World Cup 2022 tournament on November 20, 2022.

As thousands of Israeli soccer fans head to Qatar this month for the World Cup tournament, Israel faces a complicated and delicate diplomatic task to secure its citizens’ well-being in a country with which Jerusalem has no formal diplomatic relations or presence.

Last week, ahead of Sunday’s opening ceremony, a team of Israeli officials arrived in the Gulf state, setting up a special mission for the duration of the month-long tournament that will cater to any emergencies or needs that might arise among Israeli nationals who are there. In addition, Israel’s National Public Diplomacy Directorate, together with the Ministries of Foreign Affairs and Sports, the Israeli Football Association and the Israel Airports Authority, launched an awareness campaign urging Israeli visitors to the conservative Muslim nation to behave in accordance with local rules and, specifically, to avoid friction with other fans.

Speaking to Jewish Insider from Doha, Alon Lavi, spokesperson for the temporary Israeli mission set up in the Qatari capital to assist citizens, said that the delegation’s most obvious concerns were related to the use of alcohol and drugs, which are “strictly forbidden here.” But, he added, that visiting Israelis needed to be conscious of teams and fans from other nations — particularly those from countries considered enemy states — and abide by the rules of the Federation Internationale de Football Association (FIFA), soccer’s international governing body. One of those restrictions is on the waving of flags of countries not competing in the games — Israel has no team in the tournament.

“Due to the fact that we are Israelis in a Muslim country without diplomatic relations and there are competing teams, and their fans, from countries where we also have no diplomatic relations, we are saying to Israelis, ‘You need to take even more steps to make sure you’re really behaving properly in order to avoid any type of friction or danger,’” Lavi explained.

In a video put out by the Israeli government on Wednesday, celebrated soccer player Tal Ben Haim warns Israeli fans to act in accordance with local customs while in Qatar. “Going to the World Cup? From my personal experience, seeing the world’s biggest players is a once-in-a-lifetime experience, but in Qatar the rules are different, so behave appropriately,” warns Ben Haim, who has played for several international teams.

“Use of alcohol or any types of drugs are not allowed. The punishments and fines are high,” he says in the video. “If there are fights with locals or other fans, you could be arrested. In the World Cup there are clear rules, so pay attention and respect them.”

Lavi estimated that as many as 10,000 Israelis are expected to arrive in Qatar for the games, with nearly a dozen Israeli diplomats on hand to provide them with consular services, including replacing lost or stolen passports, catering to medical emergencies or dealing any criminal incidents. The first-ever direct flight between Tel Aviv and Doha took off on Sunday.

“We are working under an agreement that was reached between the government of Qatar, FIFA and the State of Israel to allow a presence of Israeli diplomats to assist Israeli citizens that are coming to watch the games,” Lavi explained, adding that “according to FIFA regulations, when a country is hosting the games it needs to be open for all people around the world.”

“Every Israeli who has purchased a FIFA World Cup ticket for a game basically is automatically getting a visa to go into the country,” he said.

An Israeli presence in the tiny, oil-rich nation is not new, however. Israel and Qatar established economic relations in the 1990s, with Israel maintaining a trade office in the country for a short time though 2009, before it was closed due to tensions over Israeli actions in the Gaza Strip. Israeli athletes have also competed in the Arab country in recent years, beginning with tennis player Shahar Pe’er, who played in the Gulf nation in 2008. Since then, Israeli swimmers, gymnasts and judo competitors have competed in international tournaments in the country.

Over the next month, however, how Israelis are received in the country is expected to be closely monitored, at least from the Israeli side, to gauge the possibility of a more permanent doorway for Israelis to enter the country. In 2020, Israel signed the Abraham Accords with two other Gulf states — the United Arab Emirates and Bahrain — and reached normalization agreements with two more Muslim-majority nations, Morocco and Sudan, but there are doubts that Qatar, a key backer of Hamas, will join into any sort of agreement to normalize ties.

“If you watch Al Jazeera or look up other media outlets funded by the state of Qatar, you will never learn that 15,000 Israelis have started to arrive in Doha, or that Israeli media outlets have already started broadcasting live from Qatar,” Hussain Abdul-Hussain, a research fellow at The Foundation for the Defense of Democracies (FDD), who has been watching the buildup to the games closely, told JI.

“Only in non-Qatar media you’ll find reports about Israel establishing a temporary consular office in Doha for the duration of the World Cup,” he said. (The World Cup Final is set for Dec. 18.)

Qatar, which has courted controversy over its human rights record, particularly its treatment of the thousands of migrant workers who built the stadiums for the games, is consistently one of Israel’s fiercest critics, even as it has actively worked to ease tensions between Israel and Hamas in Gaza by providing financial aid to millions of Palestinians living there.

“From what I’ve seen so far, I think Qatar’s arrangement with Israel is only temporary, made to serve Doha’s interests in organizing a flawless World Cup,” Abdul-Hussain concluded. “Once the tournament is over, expect Qatar and its media to go back to attacking Israel as they’ve been doing for decades.”