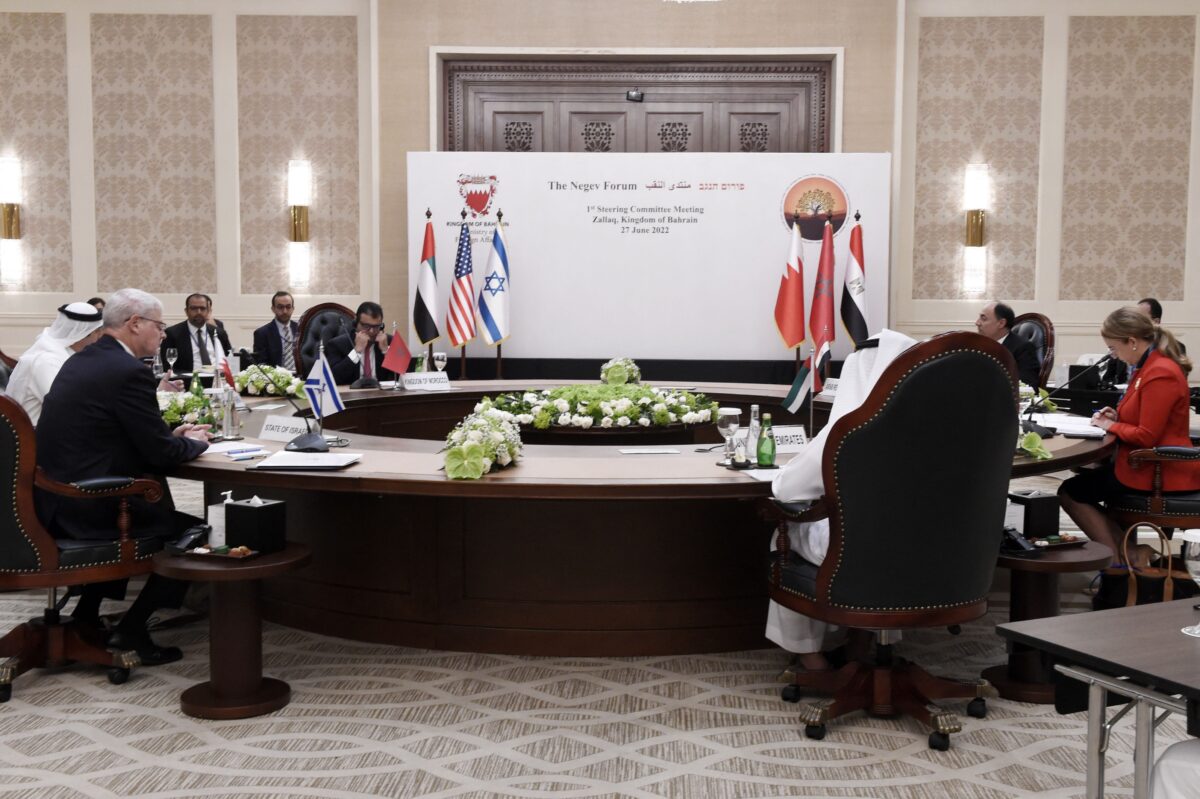 Diplomats take part in the Negev Forum's first Steering Committee meeting in the town of in Zallaq, south of the Bahraini capital of Manama on June 27, 2022.

More than two years after the signing of the Abraham Accords, collaboration between Israel and its new Arab partners has flourished. A new series of high-level conferences that will convene government officials, NGOs and private sector leaders in the “N7” — Israel and the Arab nations with which it has normalized ties — intends to formalize that cooperation and lay the groundwork for enhanced regional partnerships, Jewish Insider has learned.

The conferences will serve as the cornerstone of the newly expanded N7 Initiative, a regional program that intends to bolster cooperation between Israel and Egypt, Jordan, Morocco, Bahrain, Sudan and the United Arab Emirates, the organizers said. It will officially launch on Tuesday, when Israeli President Isaac Herzog delivers an address about his vision for Israeli-Arab normalization at the Atlantic Council in Washington.

The initiative grew out of the October 2021 N7 Conference in Abu Dhabi, the first-ever multilateral meeting between senior representatives of Israel and all of its Arab partners. The initiative will be operated by the Atlantic Council think tank and principally supported by the Jeffrey M. Talpins Foundation, who together organized last year’s conference.

“The goal of N7 is to continue driving normalization forward and to help make sure that everyone in the region sees the benefits,” said Talpins Foundation President Oren Eisner. “It is now critical that Arab-Israeli normalization continues, that we deepen relationships, foster new ones and demonstrate that normalization will deliver real tangible benefits to all people in the region.”

The new N7 Initiative intends to offer a faster-moving avenue, free of government red tape, for officials and experts from each country to meet and workshop ideas.

In March, U.S. Secretary of State Tony Blinken presided over the Negev Forum, which brought together the foreign ministers from Israel, Egypt, the United Arab Emirates, Bahrain and Morocco. In June, after the ministers announced that the forum would become a permanent convening, a steering committee met in Bahrain to create six working groups, each of which will focus on a different area, such as tourism or regional security. But the working groups have not yet met.

“The goal is to accelerate and deepen the work that’s being done through the new Negev Forum framework, ensuring that all the governments involved have access to all the best thinkers from their countries and others,” William F. Wechsler, who directs the Atlantic Council’s Middle East programs and its Rafik Hariri Center.

American officials “are encouraging what we’re doing,” added former U.S. Ambassador to Israel and Atlantic Council Distinguished Fellow Dan Shapiro, who with Wechsler is overseeing the N7 Initiative. They “see it as a value add to support the work of the Negev Forum and the working groups,” explained Shapiro.

The first N7 Initiative conference will take place Dec. 5-7 in Rabat, Morocco, with a focus on education and coexistence. The second, about water, agriculture and food security, will be held in the UAE early next year. A third conference, focused on the development of a regional free-trade zone, will also meet early in 2023.

Each conference is expected to be relatively small, with 50-60 people — subject-matter experts, and decision-makers in government agencies that handle those issues — meeting to develop and discuss tangible proposals.

The convenings will focus on areas where cooperation between Israel and its new Arab partners have lagged, with the goal of providing ideas for each working group to bring back to top government officials.

“We don’t need to help entrepreneurs and startup CEOs from Israel go to connect with the Gulf for a partner. That’s happening already,” Wechsler said.

Organizers also expect the conferences to draw participants from Arab and Muslim nations who may be rethinking their relationship with Israel.

“We have reason to believe that as a non-government convener, we are a platform that countries who have not yet normalized with Israel but are interested in what’s going on, and who are maybe thinking about taking a step in that direction, who are trying to lay the groundwork, normalization-curious, could dip their toes in the water before they’re ready to take the take the final step,” Shapiro said.

The N7 Initiative goes further than the Negev Forum, which did not include Jordan — which was assumed to have sat out the meeting due to concerns about the Palestinians — or Sudan, which has been absent from official Abraham Accords discussions since a military coup last year. The N7 Initiative will only invite representatives of Sudan’s civilian-led government, which was ousted last year.

The Palestinians also did not participate in the Negev Forum. Shapiro said he does not expect any representatives from the Palestinian Authority, but he hopes Palestinian academics, and those who work in the private sector or civil society, will attend.

“Our approach, and all the countries we talked to are in agreement about this, is that the door should be open to the Palestinians,” Shapiro explained. “There should be a place at the table for them. They should be encouraged to attend and participate constructively.”